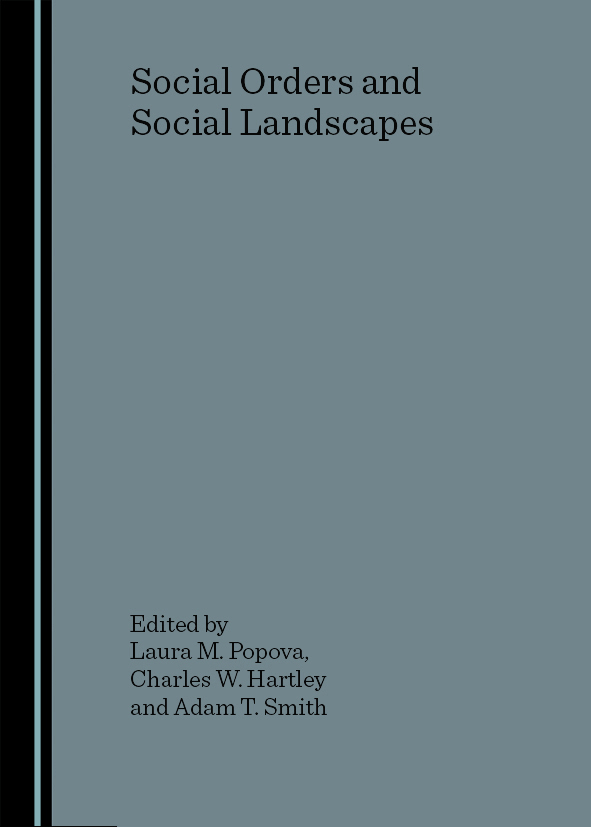 Social Orders and Social Landscapes marks a new direction in research for Eurasian archaeology that focuses on how people lived in their local environment and interacted with their near and distant neighbours, rather than on overarching comparisons of archaeological culture complexes. Stemming from the 2005 University of Chicago Eurasian Archaeology Conference, the papers collected here reflect this new research agenda, though the way in which each author addressed the theme of the conference, and thus the book, was strikingly varied. This diversity arises out of the field’s intellectual flux driven by the principled engagement of the rich analytical traditions of the Soviet/CIS, Anglo-American, and European schools. Despite the variability in approaches and subject matter, several key themes emerged: 1) the reinterpretation culture categories by examining particular aspects of social life; 2) the role social memory plays in the production of landscape and place; 3) the influence of the built environment on societies; and 4) the ways in which economic considerations affect social orders and landscapes. The result is a book that helps to re-image Eurasia as a complex landscape fragmented by historically contingent and shifting ecological and social boundaries rather than a bounded mosaic of culture areas or environmental zones.

“Scholarly research on Eurasia was transformed by the collapse of the Soviet Union in 1991. Entire areas and fields of research became accessible to European and American scholars for the first time, resulting in the emergence of new centers specializing in primary field investigations throughout the vast, politically transformed landmass of Eurasia. One such center is the University of Chicago that has recently sponsored two large international conferences on Eurasian archaeology. Social Orders and Social Landscapes is the product of the second Chicago conference held in spring 2005. The editors of the volume should be proud of their efforts that have resulted in such a broad ranging and prompt publication.

The articles encompass a variety of disciplinary perspectives, including archaeology, history, art history, palynology, and zooarchaeology; extend chronologically from Neolithic and Bronze Age times to the formation of national identity in Turkey in the early 20th century; and range geographically from Europe to China. Several articles reconstruct basic subsistence activities; others analyze distinctive settlement types and political and cultural frontiers, including the assimilation and emergence of new, self-defined ethnic groups and the selective adoption of new systems of religious belief. What unites this diverse collection is their consistent emphasis on the social construction of reality and the production of social landscapes and memories that altered perceptions of the physical world and mediated the practical activities that here have been convincingly reconstructed from the archaeological record. In so doing, rigid stereotypes are questioned and novel interpretations persuasively advanced. Early Bronze Age pastoralism on the south Russian steppes did not consist exclusively of herding animals nor was it combined, as it was later in the Iron Age, with the pursuit of agriculture; rather, D. Anthony and D. Brown suggest that at least in the Samara river valley the herding of animals occurred along side the intensive gathering of wild, nutritionally rich plants. The kalas of ancient Chorasmia are not cities, nor even proto-urban formations, but rather are large, heavily fortified enclosures meant to repel attacks of armed nomadic cavalry. They represent a continuation of a distinct Central Asian settlement pattern that began in the Bronze Age and that formed the center of a landscape divided into contiguous, self-contained oases. The Mongols not only herded livestock, but also farmed, fished, hunted, and traded throughout the vast area that they had conquered, uniting most of Eurasia into a single, economically integrated system. New perspectives proliferate throughout this richly detailed and extremely broad ranging collected volume.”

“ “Social Orders and Social Landscapes” is a stimulating addition to the still small literature in English making the rich datasets from the archaeology of Eurasia widely accessible to Western scholars. The authors of the eighteen chapters analyze data from China to the Mediterranean, from the fourth millennium BCE through the fourteenth century CE, with the tools of art and architectural history, text analysis, paleobotany and paleozoology, and anthropological theory, among others. The product of a conference at the University of Chicago, this book fulfils the goal of the graduate student organizers to apply interdisciplinary approaches to understanding the archaeology and history of the Eurasian landmass in local terms through a focus on “how people lived in their local environments.” In the decade and a half since the end of the Soviet Union, scholarly communication has broadened and the mutual influences have stimulated many new and thought provoking views on the Eurasian past. This book is an exemplary product of the new scholarly discourse.”

Honors Faculty Fellow at Barrett Honors College (Arizona State University). Her research focuses on the politics of pastoral land use in Eurasia, particularly during the Bronze Age. She co-edited Beyond the Steppe and the Sown: Proceedings of the 2002 University of Chicago Conference on Eurasian Archaeology (2006).

Doctoral Candidate in Anthropology (University of Chicago). He is currently conducting his dissertation fieldwork to better understand techniques of pottery production in the Luoyang Basin, Henan, PRC as a means of tracing social connections between communities based on the signaling of group identity, learning patterns, and Neolithic nationalism.

Associate Professor in Anthropology (University of Chicago). His fieldwork examines the South Caucasus during the Bronze and Iron Ages. Recent work includes: The Political Landscape: Constellations of Authority in Early Complex Polities (2003) and Beyond the Steppe and the Sown: Proceedings of the 2002 Chicago Conference on Eurasian Archaeology (2006, co-editor).