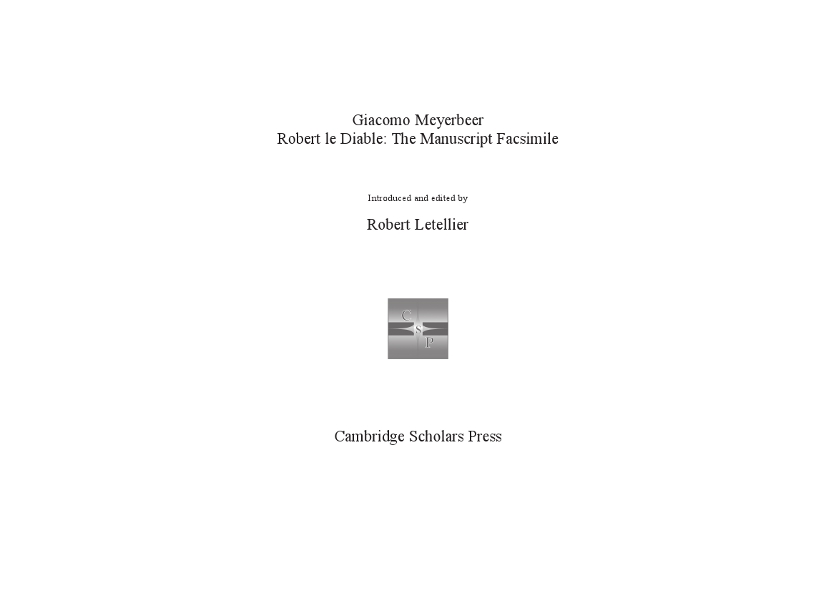 Writing to Meyerbeer in 1837 in the eleventh of her famous Lettres d’un voyageur, George Sand observed of the opera Robert le Diable:

“. . .Though you are a musician, you are more a poet than any of us!... It was not long ago that you were on your knees in the sensuous darkness of Saint Mark’s constructing your Sicilian cathedral on a scale even more vast, smothering yourself in Catholic incense at that dark hours when the candles are lit, making the gold and marble walls sparkle until you were overcome and bowed down by the tender and terrible ecstasies of that holy place....You have pieced the impenetrable silence of the tombs and...heard the bitter lamentation of the damned and the threats of the angels of darkness. You have grasped the hidden significance and sublime sorrow of all those strange and sombre allegories. Between the angel and the devil, between the fantastic heaven and hell of the Middle Ages, you have seen man divided against himself, torn between the flesh and the spirit...You have depicted these struggles, these fears and torments, these promises and raptures in solemn, touching strokes, while leaving them cloaked in their poetic symbols...”

These vivid words, written six years after the triumphant production of Robert le Diable, admirably sum up the power and impact of this important work, the principal operatic expression of French Romanticism. Its première on 21 November 1831 was one of the most sensational in the annals of opera, and its success throughout the nineteenth century universal and enduring. Not only did the composer sum up the various impulses of the splendid French lyrico-dramatic tradition of grand opéra, and introduce widely influential, structural, melodic and orchestral ideas into general operatic currency, but he seemed to address the very soul and aspiration of the people of his age. The opera based on a legend, became a legend in its own right.

The facsimile edition of the manuscript of this famous work, for so long kept private and then thought lost after the Second World War, enables lovers of opera to examine for themselves the compositional procedure of its great and often misunderstood creator. The admired pieces like Bertram’s Évocation, Isabelle’s cavatina of grace, the sensational Ballet of the Nuns in the ruins of a moonlit cloister, the decisive trio of redemption in the last act, can all be seen at their very inception. Meyerbeer produced a work “that changed the face of opera” (William J. Collins). The full significance of this score in the history of opera must still be properly assessed.

Robert Letellier is a Meyerbeer scholar who has published extensively, including a four volume English version of the composer’s diaries.