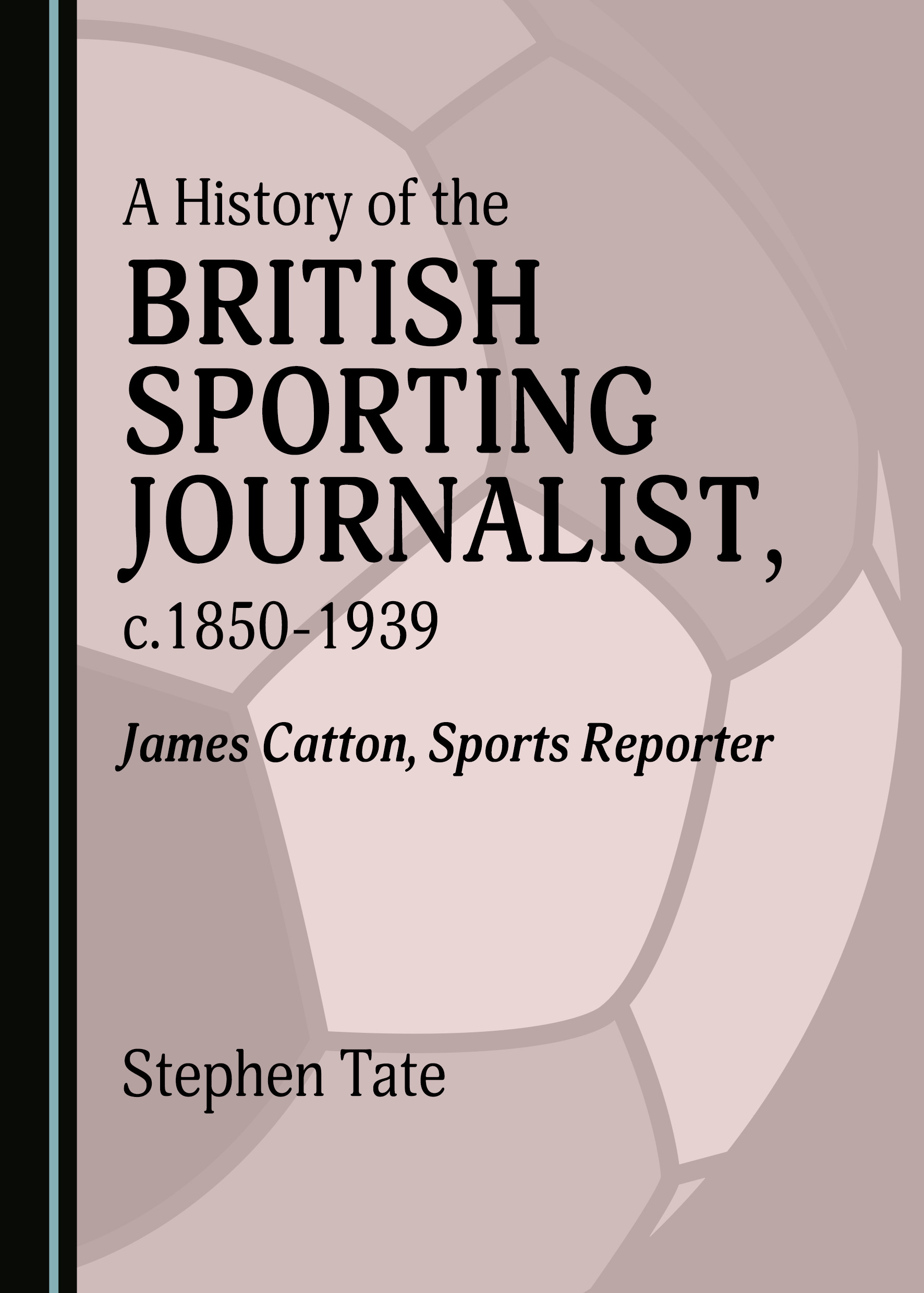 At the heart of this text strides James Catton, less than five feet tall but a giant in the field of sporting journalism. It is the story of his career, from boy reporter in 1870s Lancashire to editor of the influential Manchester-based weekly Athletic News and then grand old man of Fleet Street sports writing in the 1920s and ’30s. The book also presents the story of others, too—the first journalists to turn action into news as raw, carnivalesque, violent pastimes were replaced by codified and commercialised games. Detailing the history of their trade, the book searches for the roots of sports journalism, pushing, for the first time, the newspaper reporter to the foreground in the shared history of the press and sport. Editorial recruitment, training, writing styles, pay, status, rivalry and camaraderie, technology, celebrity, the press box, the player-reporter and drinking culture are all examined, as are the values men like Catton claimed sport, at its best, represented.

Dr Stephen Tate is the author of numerous articles and essays on the history of the newspaper journalist. He has published articles in the journals Sport in History, Archives and Manchester Region History Review, and contributed 20 entries to the Dictionary of Nineteenth-Century Journalism. He is also the author of a chapter and a case study in the second and third volumes of the History of the British and Irish Press. A former journalist, having worked on the daily press across the north of England for more than 30 years, his PhD examined the professionalisation of sports journalism in the nineteenth and twentieth centuries. He currently teaches History at Blackburn College University Centre, UK.

“Stephen Tate’s exhaustive study of sports journalists and how they went about their business […] is a very welcome addition to the literature on an area about which we still know very little […] there are so many plums to be picked from this rich pudding. […] Of the twin projects which this single volume embraces, historians will benefit most directly from Tate’s account of journalistic custom and practice as sport transitioned from pre-modern into recognisably modern forms. This is intertwined with a biography of James Catton, whose career in journalism from the 1870s to the 1930s coincided with the emergence of the new world of sport and the rise of the popular press. Newspapers and sport found each other and developed a mutually beneficial relationship based on the rapid transmission of sporting intelligence of all kinds. A small army of journalists was required to sustain this relationship and it is their story which Tate tells here in Illuminating detail. […] Though historians of modern sport often rely heavily on press sources they generally have little to say about sports news as a commodity, the process by which it was created, or the reporters who made it. Tate’s book is invaluable here. […] Tate’s fascinating study points to the symbiosis of sport and the media in Britain as they developed in tandem across the late-nineteenth and early-twentieth centuries.”
Professor Dilwyn Porter
Sport in History, September 2020

“Long before The Athletic, there was the Athletic News, essential reading for sports fans on either side of the First World War. The editor was James Alfred Henry Catton, considered a pioneer in the world of sports journalism and his career forms the backbone of A History of the British Sporting Journalist, the fruition of many years of research for a doctoral thesis by journalist-turned-academic historian Stephen Tate, it tells the story of the formative years of our industry. Catton may have been a giant in terms of achievement, but physically he was not a tall man. The young Neville Cardus, a cricket writer with what was then the Manchester Guardian, penned a memorable description. He wrote: ‘Incredibly small in height, red in the face, round as a ball, gold spectacles, white moustache, bald head at the front, twinkling eyes, he was as though born from Bacchus out of Mr Pickwick.’ Another colleague wrote fondly of ‘my guide philosopher and friend (pocket edition).’ Catton took a while to learn. Tate notes that in an early match report, he did not give the result until the 41st line. Much later, when editor of the Athletic News, Catton instructed his reporters to say ‘what happened, how it happened and why it happened.’ […] A journalist never normally reveals sources but in this case an extensive bibliography and over 40 pages of references are welcome tools in a real heavyweight volume. […] [This] is a fascinating evocation of a lost era of sports reporting.”
Philip Barker
The Sports Journalists’ Association

“Tate’s professed aim in this study is to rescue writers like Catton from anonymity and recognize the key role they played in the formation of our sporting literature. […] The book is particularly rich in its researches into the world of Manchester newspapers and periodicals, their proprietors, and the working culture they presided over, including their hiring practices, wages, and conditions of employment. Tate’s discussion of Catton’s contemporaries, such as Joe Stoddart, Edmund Walmsley, and Tommy Edge, enables us to see the wider picture beyond Catton’s own microhistory. […] As a former journalist himself, Tate is acutely and intelligently aware of the material conditions which obtained within print culture in this period. Through his detailed engagement with the various archives, he is able to identify some of the key challenges facing a changing and emergent profession in search of financial success, respectability, and greater regulation. […] Catton himself emerges as a formidable pragmatist of considerable energy and skill. Tate’s energetic work in the archives shows us the extent to which Catton was ‘the beneficiary of a new order within the world of sport, and a new focus and urgency within the newspaper industry’. […] For Tate, Catton is diminutive in physical stature but a major figure in the history of sports journalism, a writer unrivalled in his combination of sports reporting and news management. As this study makes clear, Catton is valuable not only for his own contribution but for the insight he provides into the working practices at the birth of a recognizably modern sports journalism.”
Professor John Whale
Victorian Periodicals Review, Winter 2020

“[This book is] a superb biography of James Catton. [...] But that is only half the story. Tate’s coverage of the trade/profession is marvellously wide-ranging. [...] Stephen Tate is an historian with a background of thirty years in daily journalism in the north of England. This book reveals his twin skills in producing a deeply-researched and documented history of journalism, conveyed in vivid, exciting and highly-readable prose.”
Bernard Whimpress
International Journal of the History of Sport

“Tate’s book is a significant addition to the history of journalism and of sport, given the symbiotic relationship between the two, for the more popular the sport, the more frequently it was reported upon, resulting in higher newspaper sales. This relationship still affects journalism today, with the Sun recently disposing of their Cricket and Rugby Correspondents because their reports were not driving enough clicks to the Sun’s website. Tate has produced a work that will help historians to understand how sport developed and, at the same time, how readers’ knowledge of it – and what they expected of sports journalists – increased.”
Mark Stoddart
Northumbria University; British Association for Victorian Studies Newsletter, Issue 22.1,Spring 2022