Modern Rome: From Napoleon to the Twenty-First Century 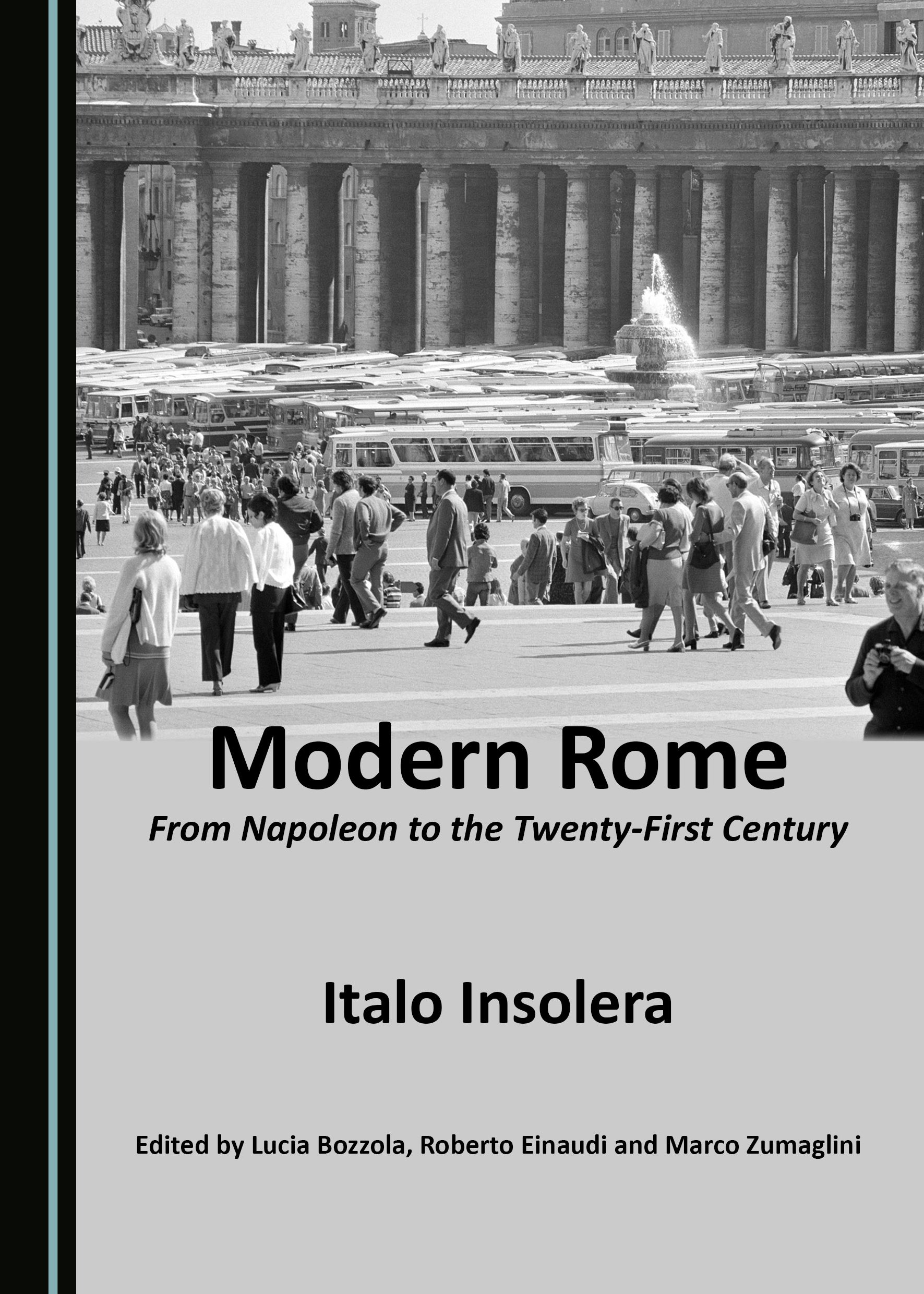 After fifty years and fifteen editions and reprints in Italy, this classic, groundbreaking work in the field of historical urban studies is now published in English. A masterful, fluent narrative leads the reader through the last two centuries in the history of the Eternal City, capital of the Papal State, then of the united Italy, first under the monarchy and subsequently the republic. Rome’s chaotic growth and often ineffective urban planning, almost invariably overpowered by building speculation, can find an opportunity for future redemption in a vibrant multicultural society and the enhancement of an unequalled archaeological heritage with the ancient Appian Way as its spine. With respect to the last Italian edition of 2011, the volume is updated, enriched in text, indexes, maps and photographs. Historians, urban planners, architects, decision makers, university students, and anyone who is interested in one of the world’s most intriguing cities will enjoy this book.

A renowned figure in urban studies and planning, Italo Insolera (1929–2012) was Professor at the Universities of Venice and Geneva. Specializing in the relationship between archaeology and the modern city, he proposed solutions for the correct (re)use of ancient towns that included traffic restriction, pedestrianization, and restoration. His remarkable talents extended to photography, strictly black and white, covering forty years of travels and of professional activity often practised through multi-disciplinary teamwork. Insolera battled against whatever diminishes the beauty of our environment and the justice of our society; his lasting relationships with environmental and cultural organizations, with citizen participation and protest are potentially his most important legacy. Of his many published books and essays dealing with the economic, social, cultural, and political conditions of urban development, this is the first to be translated into English.

Paolo Berdini served as the Head of Urban Planning in the Rome municipal government in 2016–17. An expert on the boundless Roman periphery, he collaborated with Insolera on the 2011 edition of Roma moderna.

Urban planner and author Vezio De Lucia served in the Naples municipal government (1993–97). During this time, he ordered the demolition of some 400 unauthorized buildings, a record in Italy.

The team of editors-translators is composed of:

Lucia Bozzola is an American writer and film expert and received a PhD in Cinema Studies from New York University. She has worked in the media industry for two decades.

Roberto Einaudi is an architect specializing in restoration and museum design, and urban and archaeological planning in Venice, Rome and Naples. He was also founding Director of the Cornell University College of Architecture, Art and Planning in Rome.

Marco Zumaglini is an Italian engineer. He has worked mostly on transnational projects dealing with the integrated planning of the environment with special reference to watercourses and cultural heritage sites.

“Depicting and explaining the development of the ‘modern’ Rome, from Napoleon’s urban planning laws in 1811 until the contemporary urban development, the book provides in-depth, informed and comprehensive insight into the complex socio-political, cultural and economic conditions that shaped spatial reality, in the same time leading the reader through the phases of Rome’s urban history with astonishing ease. Strongly supported by the classic work of Italo Insolera, one of the leading scholars in historical urban studies, this masterpiece illustrates the growth of the modern Rome with precious detail, pointing to both successful saving of its past from destruction, as well as the elements of chaotic urban growth. [By] reflecting on the past episodes of Rome’s urban planning, the book also provides the guidelines on future urban development crucified between the need for heritage protection, challenges of multiethnicity and trends of global capitalism. Written in a language free of professional jargon, the book is valuable reading material.”
Gerd Albers Award “Best Book” 2019 by the International Society of City and Regional Planners (ISOCARP)

“The book’s major contribution lies in the abundant, exhaustive and accurate information provided in the description of urban phenomena. It is an ordered account that covers the most important aspects of the history of modern urban planning in Rome whilst not neglecting to describe the complexity underlying any metropolitan urban process. The author accepts the cultural, social and political spheres as realities that are inextricably linked to each other and, in turn, to the city’s spatial transformation. […] The writing […] lies somewhere between history and memory: between bibliographical study and remembrance, historical event and lived experience. While descriptions based on bibliographical documentation prevail in the analyses of nineteenth-century phenomena, as the author progresses through the twentieth century, an analysis of phenomena filtered by knowledge of lived experience becomes apparent. However, he is impeccable in overcoming the difficulty of giving continuity to this personal reality: when the author has to analyse himself, he chooses to give up the limelight, avoiding any self-referential citation as much as possible, despite having been a relevant voice at different moments of the city.”
David Escudero, Universidad Politécnica de Madrid, Spain
Urban Research & Practice, Vol. 13, 2020, Issue 2

“Rome is not just another urban agglomeration. For centuries, even millennia, it defined what a city should be. Its powerful allure should offer precious lessons to city planners and place-makers, which is why the supple translation into English of Italo Insolera’s classic Roma Moderna is such a welcome event. Urban planning in Rome has never been a smooth process. […] With the Roman élite and the Vatican itself pursuing profit through unregulated development, Insolera’s account […] could make for melancholy reading. And yet his tale is a compelling one, because progress was made, even if only in fits and starts. Insolera’s attention to how urban planning, or its absence, affected the humbler classes is evident throughout Modern Rome. […] Insolera laments ‘the annihilation of planning’ after 1990. He nonetheless kept alive a high sense of what might give Romans a better urban experience, despite the haphazard quality of the city’s daily governance. Here, as throughout this generous chronicle, he focuses on both material and cultural improvements.”
Barringer Fifield
Urbanities, Vol. 10, No. 2, 2020

“The transformation of the historical centre is also charted, with the extensive demolitions carried out between the late nineteenth century and the Fascist period, and then the processes of tertiarization, gentrification and touristification that have profoundly altered its structure and function since the mid-twentieth century. Among [the peculiarities of Rome’s urban development is] […] the exceptional extent of unauthorized construction, which in the 1970s ‘was no longer one among Rome’s facts of life; rather, it became the city’s very way of being.’ […] Roma moderna has been for decades compulsory reading for anybody approaching the urban history of Rome from Italian unification to the present. It has also been a highly influential book: numerous scholars and observers have embraced and developed Insolera’s perspective and interpretations. In the last 20 years […] some […] urban historians have proposed new approaches and/or provided more detailed […] accounts of various aspects of the history of twentieth-century Rome. […] [T]his does not alter the fact that this translation into English of a veritable classic of Italian urban history is certainly praiseworthy.”
Bruno Bonomo
Sapienza Università di Roma
Urban History, Volume 47, Issue 4, 2020

“Unlike Paris, London and Vienna, which were profoundly altered during the earlier part of the nineteenth century, papal Rome had retained its old structure and appearance, substantially unmodified since the late Baroque period, and still contained within the walls built by Emperor Aurelian (270–275 CE). […] From this moment onward, Rome’s urban development took place in ways that break the city’s continuity with its past. It is a growth that excludes and leaves behind most of the city’s residents, then and in the years to come; that is oblivious to the city’s centuries-old traditions and constitutive features, and incapable of building and passing on a coherent image from one generation to the next: a growth ultimately unable to ‘conceive of planning as a means to build a society.’ […] In spite of all that, Modern Rome sends a cautious message of hope. It looks at the common threads that underlie the city’s trajectory over time and sees ‘culture and art as the key elements from which future Rome may eventually draw new reinvigorating life and meaning’.”
Francesco Siravo
Link Campus University of Rome; Journal of Urban Design, March 2021