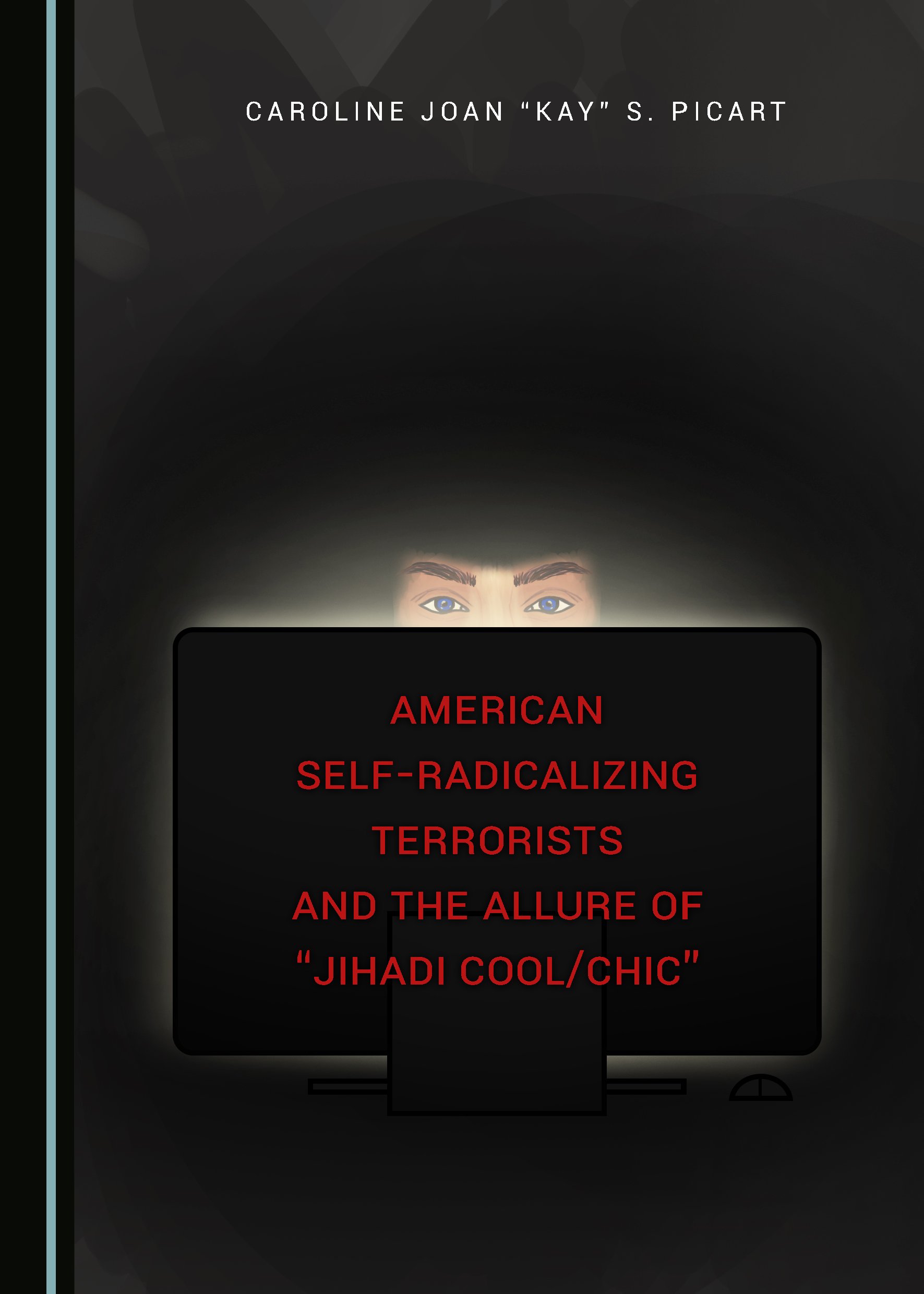 American Self-Radicalizing Terrorists and the Allure of Jihadi Cool/Chic provides a critical legal analysis of how American self-radicalizing terrorists become what they are by analyzing, in detail, the stories of Colleen LaRose, America’s first Most Wanted Female Terrorist, and the Tsarnaev brothers, Tamerlan and Jahar (Dzhokhar), the Boston Marathon Bombers. Drawing from the analytic tools of cutting-edge studies on terrorism by global experts, as well as the latest news reports, policy papers, Congressional Hearings, and legal documents, the book illustrates how the internet provides the means through which a self-activating terrorist may first self-radicalize through some imaginary or sympathetic connection with an organized terrorist network. Additionally, it shows how the romance of “jihadi cool/chic,” packaged by its mastery of Hollywood-style shots and editing, resulting in slick, high resolution productions micro-tailored to appeal to different audiences, is a pivotal factor in the evolution of self-radicalizing terrorists. While showing how there is no single deterministic pathway to radicalization, the book also demonstrates how the internet and imagined relations cemented by the rhetorics of “jihadi cool” or “jihadi chic” function as crucial catalysts, galvanizing “monster talk” into monstrous action. It includes an analysis of “America’s Most Watched Trial,” United States v. Tsarnaev, as it moved through its “guilt” and “penalty” phases, and its culmination in Jahar’s being sentenced to death by lethal injection as America’s youngest self-radicalizing terrorist. The book closes with concise updates regarding America’s self-radicalizing terrorists, such as, among others, Syed Rizwan Farook and Tashfeen Malik, the couple who sprayed a crowd of their colleagues with bullets at a San Bernardino holiday party on December 2, 2015; Omar Mateen, the security guard whose rampage at an Orlando nightclub on June 12, 2016 resulted in America’s worst mass shooting thus far; and Ahmad Khan Rahami, the individual arrested in relation to the New York and New Jersey bombings and attempted bombings on September 17-18, 2016.

Caroline Joan “Kay” S. Picart, M.Phil. (Cantab), Ph.D., J.D., Esquire, and former tenured professor, is an attorney at law practicing in federal and state appellate criminal law, and publishes peer-reviewed journal articles and books principally on law, criminology, sociology, and film. Winner of the prestigious “Best Essay” Award in 2016 by Dapim, an internationally renowned Israeli scholarly journal on Holocaust studies, she serves as editor to the Fairleigh Dickinson University Press’s series on Law, Culture and the Humanities, and advises the press on manuscript and proposal submissions.

"For those alarmed at the rise of atomistic, self-radicalized terrorists - deracinated individuals functioning as vigilantes of jihad - Caroline Picart's book offers both illumination and analytic clarity. Setting riveting narratives into powerfully explanatory theoretical contexts, she provides case studies of three notorious terrorists, Colleen LaRose ('Jihad Jane') and the Tsarnaev brothers, Tamerlan and Jahar, in each case detailing the role of the Internet in creating an alluring rhetoric of 'jihadi cool' that induced these troubled individuals to commit monstrous acts on behalf of violent movements with which they had little organizational contact. Picart's analysis provides tools essential to confronting the challenge posed by self-activating terrorists whose ability to do harm and alter history extends far beyond their numbers and resources."

"Understanding the evolution of self-activating terrorists is undoubtedly a complex task. Picart's timely book sets out the problems of any blanket preventative strategy by outlining the different factors at play through detailed and thorough case studies. The work provides not only a theoretical overview but also demonstrates the importance of individual circumstances and the role of high quality audio visual production values to create 'jihadi cool', both of which problematize a blanket policy approach. An engaging and detailed account that demonstrates the need for a multi-disciplinary approach to tackle this issue. There is something in this book for readers from a variety of disciplines - not just law, but also psychology, politics and media, amongst others. A valuable contribution to the field."

"This excellent book provides readers with key insights into the radicalization of the Tsarnaev brothers and Colleen LaRose (a.k.a. Jihad Jane). Using a wealth of diverse artefactual materials from legal, cultural, media, and other sources, the author does a masterful job of explaining the evolutionary nature of some jihadist movements. At the same time she reminds us all of the heuristic value of comparative studies for mapping a host of rhetorical and material terrains. This is essential reading for anyone interested in self-radicalized terrorists and the mediated coverage of global jihadism."

Marouf A. Hasian, Jr. Professor of Rhetoric and Communication, University of Utah

"Picart masterfully explores the enigma of self-radicalization by employing cutting-edge theories and methods. She demonstrates that American terrorists' paths to violence in America can only be charted with the tools of psychology, aesthetics, rhetoric, and technological and critical analysis. By lucidly exposing the roots of home-grown terrorism, this book reveals the challenges ahead for our society and legal system to address the origins of this violence. Picart's disturbing narratives lead us to an unsettling conclusion. Right now, we are indeed our own worst enemy."

"This impressive and thought-provoking book explores a topic that so far has been largely neglected and overlooked - namely, how and why terrorists become terrorists. Through a detailed study and multi-layered analysis of the causes and processes of so-called 'self-radicalized terrorism', Picart's book provides a critical eye-opener not only to the disciplines of criminology and law studies but also to American society as such. Quite simply, a must-read, must-understand and must-use book for anyone trying to come to terms with our contemporary age of terrorism."

"How and why do some of us become 'monsters'? Devoid of sentimentalism, rage, judgment or moralizing, this captivating, thought-provoking book offers a richly detailed account of renowned cases of American self-radicalization that culminated in murderous acts of terror. The book's close scrutiny of these tragic cases reveals how deep personal frustration combined with familial instability, as well as exposure to internet propaganda and susceptibility to 'jihadi cool', may lead some of us from self-radicalized thought to heinous action. As in a truly gripping thriller, even as all is systematically revealed, the horror remains."

Orit Kamir Professor of Law and Culture, The Israeli Center for Human Dignity

"Caroline Picart's American Self-Radicalizing Terrorists and the Allure of Jihadi Cool/Chic is a fascinating look into the world of lone wolf terrorism. Through meticulous research and an engaging writing style, Picart unravels the dynamics of this growing threat. The case studies included in the book are compelling and provides new and important insights into how and why certain individuals become lone wolf terrorists. Definitely a book everyone should read."

"Picart's timely comparative study offers an accessible examination of the dynamics at work within U.S. jihadism. Challenging stage theories of radicalization, she illuminates the complex intertwining of 'monster talk' and 'jihadi cool' rhetoric, social media, and the imagination in the formation of radicalized self-understanding and the rationalization of action befitting this imagined and stylized form of self."

"The mechanisms toward self-radicalization she details at the conclusion of her book underscore the rapidity of radicalization which law enforcement must now take seriously when interviewing individuals whose psychological and sociological history of loss and maladjustment have already drawn the attention of security services. These individuals are at significant psycho-social risk and when combined with the speed of the Internet and the allure of the instantaneous heroism of ihadism, those in positions of leadership within both the secular and religious communities must now recognize they no longer have years or even months to adopt a “wait and see” attitude about such individuals’ potential for carnage."