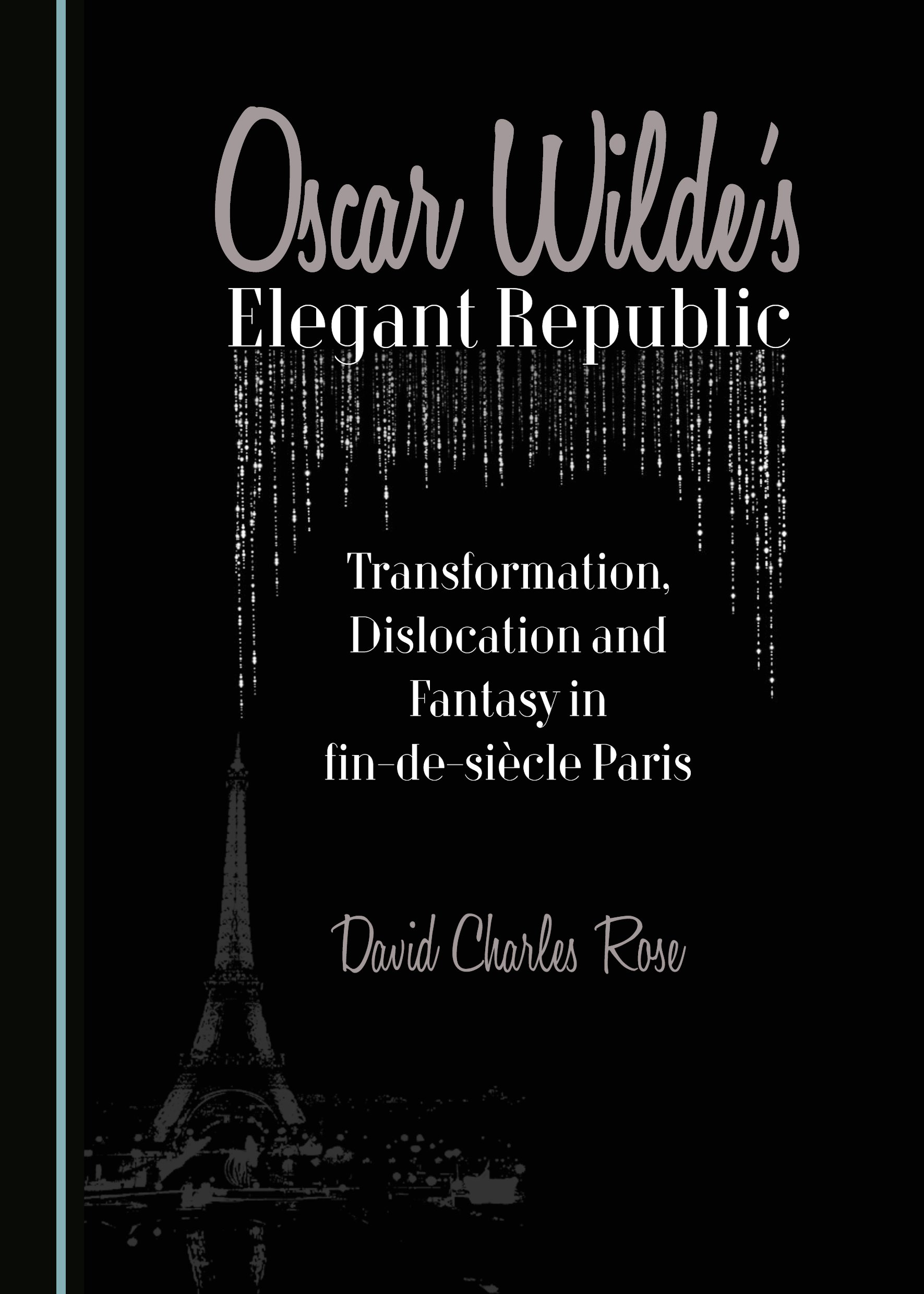 Why was Paris so popular as a place of both innovation and exile in the late nineteenth century? Using French, English and American sources, this first volume of a trilogy provides a possible answer with a detailed exploration of both the city and its communities, who, forming a varied cast of colourful characters from duchesses to telephonists, artists to beggars, and dancers to diplomats, crowd the stage. Through the throng moves Oscar Wilde as the connecting thread: Wilde exploratory, Wilde triumphant, Wilde ruined. This use of Wilde as a central figure provides both a cultural history of Paris and a view of how he assimilated himself there.

By interweaving fictional representations of Paris and Parisians with historical narrative, Paris of the imagination is blended with the topography of the city described by Victor Hugo as ‘this great phantom composed of darkness and light’.

This original treatment of the belle époque is couched in language accessible to all who wish to explore Paris on foot or from an armchair.

David Charles Rose was born in London and educated at Highgate School and Magdalen College, Oxford, where he was a student and disciple of A.J.P. Taylor, and at University College, Dublin. In 1995, he became the first Director of the Oscar Wilde Summer School in Bray, County Wicklow, before moving to Goldsmiths College, University of London, as Visiting Tutor and Sessional Lecturer, where he created THE OSCHOLARS, an online resource of Oscar Wilde scholarship. He made his home in Paris in 2004, but now lives in Royan, Charente Maritime. Current president of the Société Oscar Wilde, he is married to Danielle Guérin, editor of the online review of Wilde studies, Rue des Beaux Arts and author of Oscar Wilde, Qui suis-je? (Editions Pardès, 2014).

"In this extraordinarily detailed, wide-ranging and deeply researched book, David Charles Rose argues that Paris was an essential prop in Oscar Wilde's performance of self: to understand Wilde's carefully constructed public and literary personality, one must understand fin-de-siècle Paris, a city that was Wilde's mirror as well as his stage. Merging fact with fiction, the real with the imagined, Wilde and Paris were living myths, spinning an endless web of legends around themselves. Alongside Dublin and London, Paris was a crucial tool for Wilde's self-invention, and it is impossible to imagine a more knowledgeable, enthusiastic, or assiduous guide to the capital's faubourgs, café's, theatres and boulevards than David Rose. [...] This erudite and unquestionably valuable study is hugely entertaining and, to use a favourite Wildean term of approbation, wonderfully suggestive."

"This is a book research libraries should keep on the open stacks and readers of ELT may wish to add to their personal reference collections. [...] Rose is led by a desire not only to add detail to the record, but to clean up mistakes in past scholarship. He succeeds in doing this by being careful about chronology and corroboration. [...] Ellmann’s biography of Wilde is a great work of literary scholarship, but its concept of homosexuality is dated and it is wrong or incomplete in many details. Someday it will be superseded by another study of the life. The author of that work will want to have Oscar Wilde’s Elegant Republic close to hand, and will often feel grateful to David Rose."

"Oscar Wilde's multiple visits to Paris are well known ... but for many readers, what is less clear is what Paris was all about - reality and cliches or literary fantasies don't always go well together. In Oscar Wilde's Elegant Republic, David Charles Rose looks to remedy this by proposing a socio-cultural cartography drawn from three main areas: transformation, dislocation and fantasy. His stated purpose is to 'influence our understanding of both Wilde’s creativity and his social position' (175), and this book makes it possible to better grasp the many facets of his environment and to better understand the relevance of the famous contrast between the work and the life of a genius."

"[T]his book stands as a rare and complex gift that Rose has given his readers. It is a sprawling study about a sprawling city at a sprawling time in its existence, yet nonetheless we come from it exhilarated and gratified. [...] Oscar Wilde's Elegant Republic gave me a much clearer sense than I previously had of the creative, emotional and imaginative atmosphere of fin de siècle Paris. It has enhanced my understanding not just of Wilde's writing but of the work of his contemporaries, French, American, and English with far greater effectiveness than any recent criticism I have encountered. Perhaps it is because Rose, unlike so many contemporary literary critics, actually enjoys his topic and writes out of that pleasure."

"The work examines the relationships and interrelationships which were developed in Paris and Parisian society at this time. It was a large and diverse community, comprised of writers, artists, composers and singers, amongst others, from many different nations. We discover how many non-Parisians came to be residing or sojourning in Paris, what brought them there and their experiences of this great city; oftentimes the narrative is interspersed with a blending of both factual and fictional accounts, which works very well. Through a close reading of Oscar Wilde’s Elegant Republic, we are better able to understand the psyche of Wilde within this cosmospolitan metropolis. [...] Interestingly, it does form the first instalment of a trilogy ... No doubt [the other two volumes] will continue to add to Wilde scholarship in an original, innovative and detailed way, as the first volume has done."

"[This] is essentially an encyclopedic survey of Paris in all its facets. Rose, it seems, has digested everything, at least as related to the period. He ranges from the morgue to Montparnasse, caviar to caves, fairies to ferries, cynosure to cyanide. His erudition is vast. [...] It is a book in many ways similar to the city it describes: stitching together threads, wandering off in various directions, floating on the surface, digging for dirt, rambling, reflecting, resting. A labor of love to the city of love."

"In Oscar Wilde’s Elegant Republic, Wilde becomes a prism for reconstructing nineteenth-century Paris as a social and intellectual network – a cosmopolitan and at the same time distinctly French metropolis. In so doing, the book also opens up original perspectives on other bridge figures between British and French cultures, such as John Gray, George Moore, John Singer Sargent and Arthur Symons. Rose makes a compelling case to rethink that often-invoked but rarely properly-explored topic that is Wilde’s involvement with French culture – we just need to remember that even Ellmann, the most authoritative among Wilde’s biographers to date, rattles rather quickly through Wilde’s Parisian associations. It is to be hoped that his book will inspire further research into Wilde’s French connections and, more broadly, into the literary connections between the British and French fin de siècle."

"To write on Wilde today, one should have a comprehensive, if not entirely exhaustive, knowledge of Wilde’s life and work. Fortunately, there are few modern scholars better qualified to discuss Wilde than David C Rose. [...] In fact, Rose probably knows more about Wilde than almost any other living person, and his interest is not limited to any particular aspect of the man or the work, but displays a generic passion for every aspect of the fin de siècle, Wilde’s Irishness (he conducted a Wilde school in Ireland when he lived there some years ago) and his homosexuality. Now, in Oscar Wilde’s Elegant Republic, he marries that voluminous scholarship to what seems to be an encyclopaedic knowledge of Paris and the French cultural milieu."

Richard Pine Director of the Durrell Library, Corfu; Author of The Thief of Reason: Oscar Wilde and Modern Ireland (1995) and The Disappointed Bridge: Ireland and the Post-Colonial World (2015)

"[T]his is a distinguished and exceptional study that will change and inform scholarship on Wilde for years to come."

"Given Rose’s academic capabilities, one would be hard put – for some time – to come across a further Wilde-related project as worthy as this. The up-to-date Bibliography alone, which runs to 45 pages, is to be treasured by all those who take a serious interest in Wilde’s work."

“All in all, one should be grateful to Rose for assembling so much disparate and often obscure material together in one location; no doubt there will be many scholars in the future quarrying away at his book to obtain some of the raw materials for their own examinations of Wilde. However, they should not be the only ones, for this is not just a book about Oscar Wilde. Equal weight should be given to the “elegant republic” of the title. (The epithet is – of course – Wilde’s). Rose has written an aficionado’s book about Paris (or at least, a certain part of Paris during a certain period).”
Bruce Gaston
Ruprecht-Karls-Universität, Heidelberg; Irish Studies Review, 26:3, 2020