The Christian Slaves of Depok 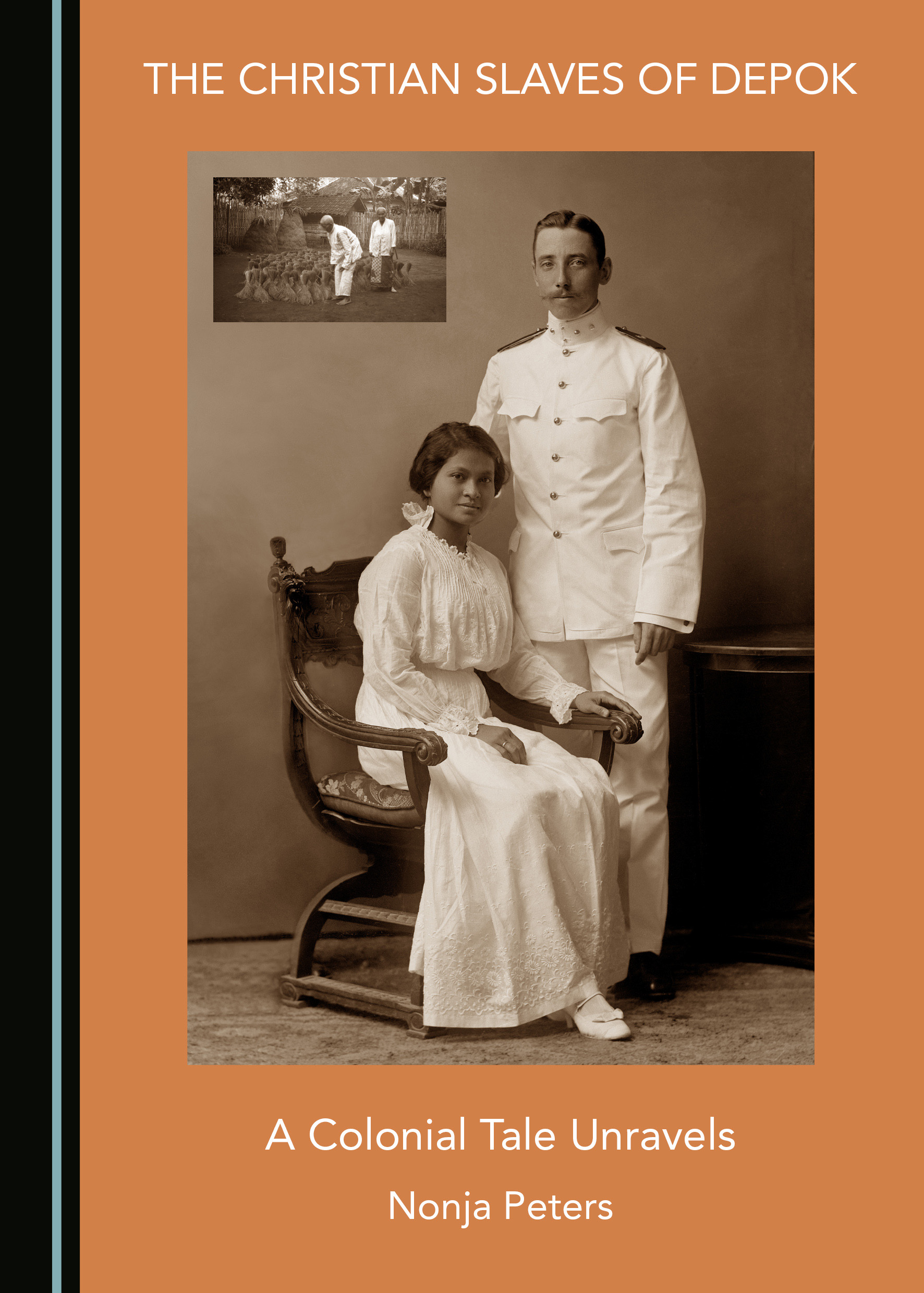 The Christian Slaves of Depok: A Colonial Tale Unravels (2021) by Dr Nonja Peters is a highly readable and thoroughly researched book which details the little-known history of a group of colonial slaves that were once ‘owned’ by Dutch merchant Cornelis Chastelein (1657-1714) in Java. In addition to extensive historical and sociological research into the Christianisation of the Depokker slaves, Peters interviews contemporary descendants of the original group of slaves to whom Chastelein offered up parts of his extensive land holdings in his will.

Chastelein was a fourth-generation member of a highly entrepreneurial and innovative family. Born in Amsterdam, he was one of seven surviving children out of thirteen, and a member of the Calvinist Reform Community (which included Walloon Protestants)—the unofficial state religion of the Republic of the Netherlands which played a prominent role in socio-cultural, public and administrative life in Europe and South-East Asia.

Before ‘Indonesia’ was a colony of the Dutch government, it was the locus of a thriving international trading company which we know colloquially as the ‘VOC’, the Netherlands East India Company or the Dutch East Indies Company. VOC stands for Vereenigde Oost-Indische Compagnie. Essentially, it was the first multinational company in the world, and the largest trading and shipping enterprise during the years of the Dutch Golden Age in the seventeenth and eighteenth centuries.

In August 1675, Cornelis arrived in Batavia with his sister Ida and they both quickly became part of the Indisch aristocracy because the Chastelein family were related by blood or marriage to people in the upper echelons of the society. Belonging to such a group also ensured for Cornelis a quick passage up the ranks of the VOC. Cornelis spent 16 years in the employ of the VOC before retiring for 14 years, then returning as Councillor-in-waiting on the Council of the Indies under Governor-General Joan van Hoorn in 1705. Four years later, Chastelein became a full member of the Council of the Indies—the VOC’s governing body for all of South-East Asia.

Despite their ‘superior knowledge, vision, [and] mission’, however, VOC officials all owned slaves (Peters, 2021: 65). Many VOC administrators established country estates in the Batavian hinterlands, where they combined business, entertaining and family life with slave ownership. Chastelein called the Hinterlands (Ommelanden) the ‘wild west frontier’ in his treatise Encroaching Thoughts [Invallende Gedagte] (Peters, 2021: 75).

In 1687, after his wife died, Chastelein became a plantation owner and kept expanding his land holdings over the years. In 1699, he also had a country house built. His slaves cultivated the land and produced pepper, coffee and indigo. In addition to his other children by his wife, he had two daughters by the Balinese nyai/concubines—(only) one of whom he adopted.

In his final testament, dated 13 March 1714, Castelein offers us a unique perspective of his estate and his visions for the future of his “freed” slaves (Peters, 2021: 123). He offers the lion’s share to his only son Anthony, while also providing for his adopted daughter Catherina to whom he leaves a parcel of land.

The demise of the VOC and the birth of the Netherlands East Indies colony (1816) left intact the lifestyles of many former VOC employees and merchants. Slavery ended officially in 1860, but the hierarchical feudalism of its inception continued into the state-sponsored colonial era.

Depok was a place of isolation. Consequently, the Depokkers were prevented from mixing more widely with groups of equal status in Batavia and Bogor. This led to what is termed ‘endogamy’, and their Christianisation also contributed further to creating a community forced to ‘marry-in’ because they were discouraged from mixing with Javanese Muslims and the Chinese.

After Chastelein’s death, the Depok estate became essentially a ‘dessa bestuur’—or village municipality. Even great changes in the Indies over the late colonial period of the 19th century had minimal impact on Depok because of its relative isolation. Missionaries kept track of births, deaths, marriages; translated the catechism book into Malay; built churches and educated the Depokkers. The missionaries were active evangelists who were often disappointed that the Depokkers themselves did not seem to have imbibed their messianic zeal, partly because they simply did not understand the biblical texts (Peters, 2021: 179).

While missionaries debated the physical conditions of the Depok estate in the decades after Chastelein’s death, the fact is that the Depokkers were smart in returning to a subsistence lifestyle and establishing a ‘thriving piggery’—full well knowing that such an enterprise would not be subject to theft from the Muslim Javanese (who did not, of course, eat pork) (Peters, 2021: 187). After 1864, with the aid of Pastor Jan Beukof, (whose tenure lasted 23 years), Depok was transformed in a highly organised way, with improved irrigation leading to greater rice yields and the improved welfare of the Depokkers (Peters, 2021: 198).

In 1889, the rail line reached Depok and many Europeans were in residence there because of the cooler climate. By this time, some Depokkers were richer than others because of decisions they had made about how they developed or on-sold their land. Indeed, Chastelein had bestowed on the freed slaves the right to make certain practical decisions, while offering up young slaves as labourers to older slaves. By this time, wealthier Depokkers employed poorer ones to do the manual work of tending to rice-fields, chopping wood or looking after livestock (Peters, 2021: 222).

In 1854, it became possible for Depokkers to apply to be considered ‘legally Dutch’ (Dutch Nationality Act) and this Gelikgesteld (equivalence) put those that succeeded on a similar social footing generally as ‘Indos’ (Indo-Europeans) (Peters, 2021: 234-5). From the late 1870s, some Depok families began to use Dutch education and status as landowners to apply to be registered as Staatsblad Europeanen (Gazette-Europeans), and this offered them the chance to apply also for Dutch passports (Peters, 2021: 235).

“Information on the early histories of the Depok families is scant. The available aspects of their histories in this book are told by current members of the family post-diaspora in the mid-20th century. Most were born overseas after 1950 and have few documents at their disposal. The older ones have only their memories… A major drawback is that most family albums and documents were lost when Indonesian revolutionaries destroyed Depokker homes in October 1945. To make matters worse, most older family members stayed in Depok when the younger ones left for the Netherlands.”

Indeed, recovering ‘lost’ histories is no mean feat. Peters’ work resonated with me because I had spent five or more years researching my own ‘Indo’ family history in Java. While my ancestors were not slaves, nevertheless, like many of those of ‘in-between’ status in the late colonial period, their situation mirrored the ‘Dutchification’ of the Depokkers, the hardships experienced in World War II and the Indonesian revolution and their ‘exile’ to the Netherlands. My mother had often spoken of family members in the diaspora ‘marrying in’—in other words, marrying other ‘Indos’ in the Netherlands rather than the ‘echte’ (real) Dutch. Interestingly, the mention of ‘skin colour’, and its connection to social status, is something very familiar to me and something that to this day is still cause for comment inside my own extended family (Peters, 2021: 256).

Today, many Depokkers describe themselves as ‘in-betweeners’ floating between the Indonesians and the Dutch—seen as Indonesian in the Netherlands, seen as Dutch in Indonesia (Peters, 2021: 433). Theorist Stuart Hall comments:

“We think of identity whenever [we are]… not sure of where [we] belong; when we are not sure of how to place ourselves among the …variety of behaviour, styles and patterns, and how to make sure that people around the world accept our “placement” as right and proper so that both sides… know how to go on in each other’s presence.” (Peters, 2021: 433)

Cornelis Chastelein gained mythical status amongst the Depokkers of Java and the Netherlands. Fact and fiction are much enmeshed (Peters, 2021: 426). Peters’ book pays homage to the resilience of the original Depok slaves and rescues from potential obscurity the stories of this specific group of people.

Dr Kathryn Pentecost has written for Inside Indonesia and continues to write for The Indo Project. Her doctoral thesis is titled “Selamat jalan, sampai jumpa lagi [Farewell, until we meet again]: Transcultural family stories from colonial and postcolonial Indonesia”.

The Christian Slaves of Depok: A Colonial Tale Unravels is available now in Hardback at a 25% discount. Enter the code PROMO25 to redeem.