An Evaluation of Its Present Status and Future Directions 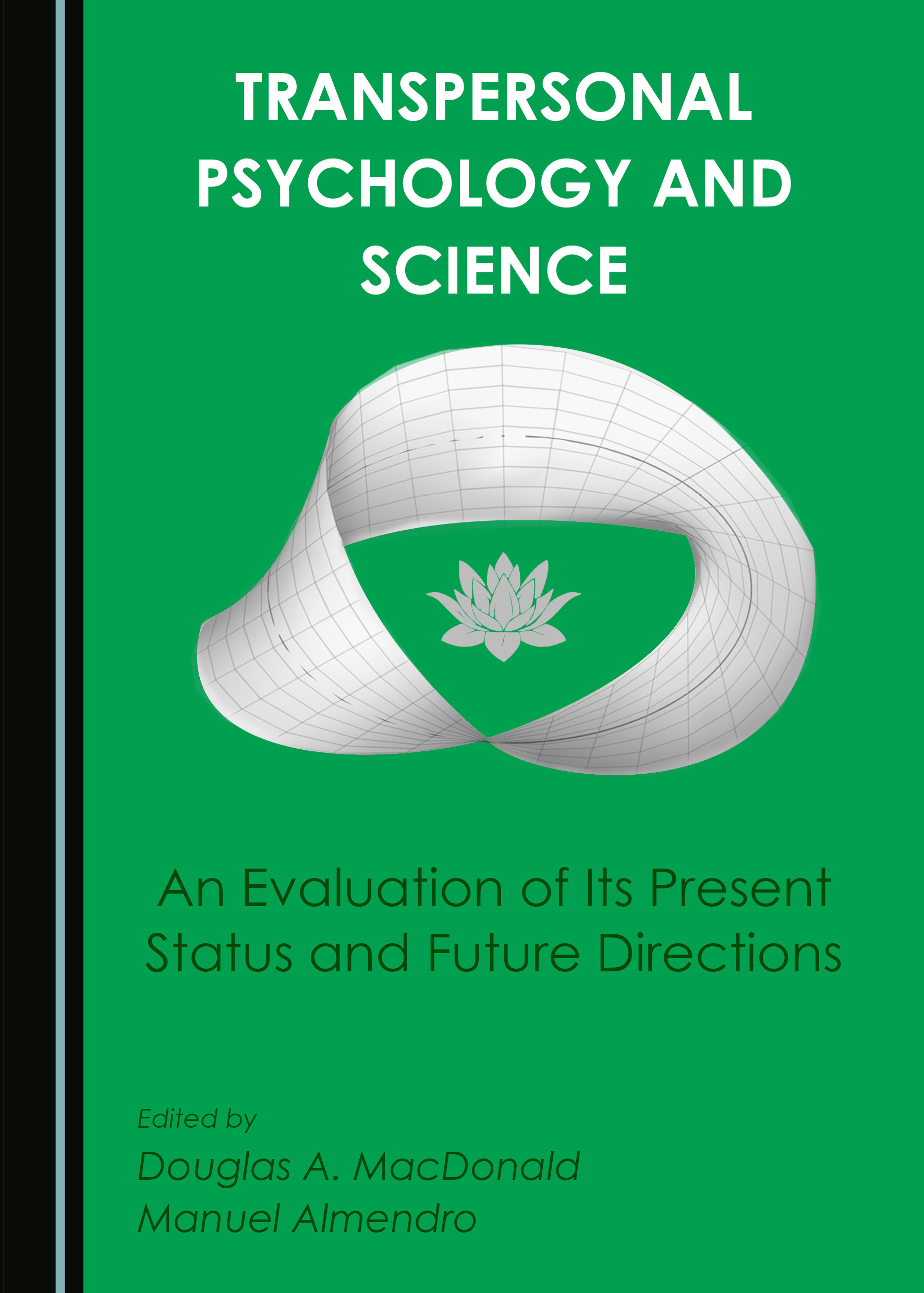 Edited by Douglas A. MacDonald and Manuel Almendro

Originally heralded by its founders as the “fourth force” in psychology (following the first three forces of behaviorism, psychodynamic theory, and humanistic psychology, respectively), transpersonal psychology is a field born in the late 1960s in the United States that aimed to expand the purview of psychological science and practice to incorporate spirituality, exceptional experiences, and transcendence of the self into conceptualizations of human functioning and development. At its core, particularly in its early years, was a commitment to integrate the insights and technologies (such as meditation) of ancient contemplative and wisdom traditions with modern science to permit a fuller and more complete understanding of consciousness and human potential than what was seen as possible with the theory and research available in mainstream psychology.

When it came onto the scene, transpersonal psychology was a field like no other. It was open to exploring new possibilities in theory and research, and sought out synergies between psychology and other disciplines including physics, engineering, biology, medicine, anthropology, philosophy, and comparative religious studies (with emphasis given to Buddhist, Hindu, and indigenous and shamanic traditions) to devise innovative approaches to science and professional practice. The first journal dedicated to transpersonal scholarship (Journal of Transpersonal Psychology) was launched in 1969 and the first professional association (the Association for Transpersonal Psychology) was formed shortly thereafter. Researchers and clinicians alike were excited at the promise of the field, and both the journal and association flourished. In due course, interest in transpersonal psychology moved beyond America, and different professional associations and scholarly communities began to appear throughout the world. Given these developments, transpersonal psychology appeared to be thriving and all indications pointed to the field having a robust and productive future.

However, appearances can be deceiving.

While transpersonal psychology seemed to be doing well initially, it received a mixed reception by the broader academic and professional community, and has never been embraced by mainstream science. It faced (and continues to face) challenges regarding its scientific legitimacy and uniqueness relative to humanistic psychology that compelled some of its proponents to defend the field. Unfortunately, such efforts were only partially successful in convincing critics of the field’s potential, and transpersonal psychology found itself marginalized and even disregarded by many. This has contributed to transpersonalists turning inward to their own communities, which presently operate in a highly insular manner and with little representation and participation with scholars from other disciplines.

At the same time that it has been grappling with its place among the scientific and professional disciplines, conflict and disagreement began to arise within the transpersonal community itself. Uncertainties about how to best define the field and whether or not its subject matter is amenable to science began to have a disruptive effect on how transpersonalists saw themselves and their work. There has also been profound disagreement regarding its dominant theories (particularly the theory of Ken Wilber) that has further contributed to a fragmentation of the field and to the loss of important members of the transpersonal community who now disavow its value as an area of inquiry. Combined, these problems have not only undermined the coherence of the field in terms of its definition, focus, theories, and methods, but have also rendered transpersonal psychology vulnerable to exploitation. Over the past several years, it has become increasingly commonplace for people with minimal to no formal training to proffer ideas and practices to the public that are little more than new ageism cloaked as transpersonal psychology. This, in turn, has further eroded the reputation of the field.

This now brings us to our book.

Both of us (Doug and Manuel), have been members of the field for many years and have considered transpersonal psychology to be a science-informed subdiscipline of psychology since its inception. Throughout our careers, we have attempted to engage in scientific research and to advocate for the incorporation of science into professional practice. However, we have been witness to the problems of the field as described above and have been concerned for its future. We are also both aware of changes happening in the wider scientific and professional community. Topics of study that were once at the core of transpersonal psychology—consciousness, meditation, self-transcendence, spirituality—are now commonly investigated and/or utilized by such disciplines as positive psychology, health psychology, the psychology of religion, medicine, nursing, social work, and counselling. Though we are generally supportive of these disciplines taking such topics seriously, we have noticed that transpersonal psychological scholarship is rarely mentioned, acknowledged, or cited in the burgeoning literature on these topics. It seems that transpersonal psychology is being sidestepped and ignored, and risks being left behind.

We ourselves are of the view that transpersonal psychology has a great deal to offer but needs to address its internal conflicts and deficiencies before it can function as a rigorous and respect-worthy subdiscipline. We reasoned that one way of doing this would be to prepare a book where recognized experts in the field from all over the world offer their perspectives on the state of transpersonal psychology and share their views on the place of science within it. We would then use their perceptions as a basis for assessing the current state of the field and suggesting ways of strengthening it moving forward.

Transpersonal Psychology and Science is the embodiment of our efforts.

With a total of 29 chapters, the majority of the book comprises contributions from some of the most erudite and influential thinkers, researchers, and practitioners in the field. Our experts offer an incredible array of viewpoints and arguments that seem to emulate the status of the field as described earlier, but do so in a manner that is collegial and constructive. We were pleased with the honesty and forthrightness of our experts and with their attempts to “do good” for transpersonal psychology.

As we read the contributions, the diversity of perspectives appeared to be incompatible, and we were hard-pressed to find a way to reconcile and integrate them all. This presented challenges to us as we were aspiring to offer firm and well-delineated directives for the field that were inclusive of all points of view. However, as we reflected upon what our experts shared, we began to take notice of some common, though not consensual, themes. Just as importantly, we surmised that the book would be better received, and transpersonal psychology better served, by us setting out concrete and actionable recommendations that could be enacted at the level of both the individual and the organization, so as to facilitate collaborative discussions and problem-solving among members of the transpersonal community.

So that is what we did in the final chapter.

We anticipate that there will be a few people who will see our recommendations as dictates and reject them out of hand. In the end, we accept that it is unlikely that we will be able to please everyone. Nonetheless, we are confident that even the most critical reader will perceive at least some benefit to them.

Even though we do not want to disclose too much in this post, here is a brief summary of some main points in the final chapter:

In conclusion, there is no doubt in our minds that Transpersonal Psychology and Science is an important and timely book that provides a fulsome overview and evaluation of the field as it currently exists. Readers with an interest in transpersonal psychology will enjoy the myriad perspectives put forth by our experts and, hopefully, will feel inspired to take steps to help ensure the future of the sub-discipline.

Manuel Almendro, PhD, is a clinical psychologist and director of Oxigeme, a private school in Spain, where he conducts psychotherapy, research and teaches in a training program. He holds a European Certificate in Psychology and Psychotherapy (EuroPsy) and is a member of the European Federation of Psychologists’ Associations. He is past founding president of the Spanish Transpersonal Association, and serves on the editorial boards of the International Journal of Transpersonal Studies and the Journal of Transpersonal Research. He has authored a number of articles and books, and conducts lectures and workshops throughout Europe and South America.

Transpersonal Psychology and Science: An Evaluation of Its Present Status and Future Directions is available now in Hardback at a 25% discount, Enter the code PROMO25 at checkout to redeem.