Towards a Theory of Whodunits 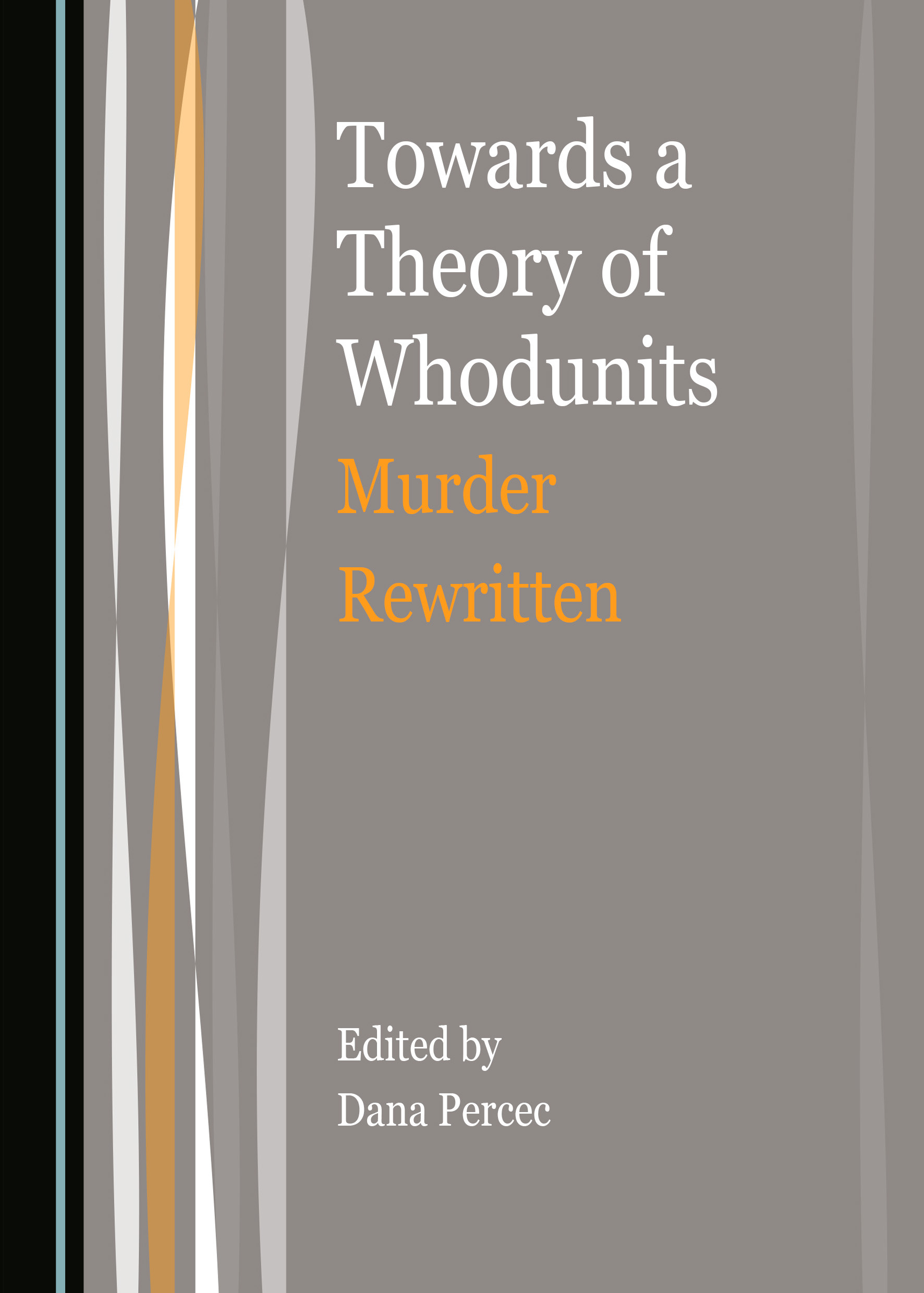 This book is the fourth in a series published by Cambridge Scholars, devoted to several literary genres whose evolution in today’s globalized culture has been the result of a combination of highbrow ideals and market necessities. After focusing on romance (Romance: The History of a Genre; 2012), fantasy (Reading the Fantastic Imagination: The Avatars of a Literary Genre; 2014), and children’s literature (A Serious Genre: The Apology of Children’s Literature; 2016), Towards a Theory of Whodunits: Murder Rewritten brings to the academic and general public’s attention the complexity and versatility of crime fiction.

The critical reception of all these genres has been, more often than not, controversial. Making their official debut in the nineteenth century, their story goes a long way further back in time (for romance, as far as the Middle Ages). They have all experienced ups and downs, with golden ages of popularity and lapses into oblivion. They are often treated with impatience by mainstream culture for their predictable plots, shallow characterization, or stereotypical language. However, they now hold a leading position in the international book market, being endorsed by the traditional audio-visual media, technology and the Internet, as well as by social media and the film industry.

The books in this series wish to account for the success of these genres, highlighting their fluid boundaries and concluding that the “fuzzy” label often attributed to them has worked in their favor. The countless subcategories which have emerged, with many unexpected and sometimes unlikely blends, only reinforce the polymorphous nature of contemporary popular culture, where hybridity is the norm.

Towards a Theory of Whodunits: Murder Rewritten, addressing specialists, students and the general public, includes contributions by academics from Romania, the USA, Spain and Turkey, with expertise in Gothic and vampire studies, postcolonial studies, ethnic studies, film studies, and literary theory. The volume follows the development of detective fiction from its early days during the late eighteenth century until its contemporary multi-media expressions, as well as its reception, filiation, and legacy. An important finding of all fourteen chapters is the fact that, while whodunits have rarely been regarded by critics and theorists as highbrow, they have constantly negotiated their position, following and, at the same time, defying literary and aesthetic conventions. The book also encourages readers to look at detective fiction in a new light by proposing a pluri-disciplinary approach and justifying its appeal to a diverse readership with the help of genre theory and reader-response theory.

The four parts into which the book is divided propose numerous main directions of assessing the literary, aesthetic, socio-cultural, practical, and even ideological value of crime fiction with its varieties, from Gothic and neo-Gothic fantasy, mystery, detective story, thriller, horror, and police procedural, to historical novel, metafiction, tragedy, speculative fiction, and the rewriting of the classics. The image is completed with references to non-fictional texts and to non-print media.

The four chapters in Part I, Archetypes and Avatars, discuss the origins of detective fiction, going back to the labyrinths of feeling characteristic of the Gothic and of Romanticism and to the clash between pre-modern anxieties and concerns about the supernatural, on the one hand, and modern rationalism and trust in science and empirical observation, on the other. Francisco Javier Sánchez-Verdejo Pérez’s essay looks at the continuities and discontinuities between the Gothic genre and detective fiction, where the former reflected the philosophical and aesthetic preoccupations of the age, while the latter responded to the new social and scientific realities. Dana Percec’s chapter argues that the detective was born at the crossroads between two ages and two worldviews, and looks at several pseudo- or proto-“cases”, which deal in either fear or the sensational, as non-fictional instances of the transition from the preternatural to the natural, predicting the emergence of police “cases”, whose fictional accounts aspire to the standards of verisimilitude of the modern, rational mind. Ana-Cristina Băniceru discusses the inherent similarities between the Gothic and the detective, and how the former shaped the latter, before witnessing its cinematic transformation into the noir and the neo-noir. Marius-Mircea Crișan and Carol Senf’s chapter establishes a connection between the vampire and the detective, both emanations of the nineteenth century, which initially seem to have little in common, with the former regarded as a haunting and mysterious figure from the past and the detective a hunter capable of taking advantage of modern technology within the heart of the contemporary urban environment.

Part II, Negotiating with Highbrow Genres, demonstrates that, like other popular or middle-brow genres, crime fiction also aspires to canonicity, with authors who write a highbrow novel as if it were a whodunit or who adapt a classical piece as a whodunit. All the examples considered in this section are indebted to the postmodernist game of intertextuality, which forces authors and texts to reflect critically on their position in the literary continuum and their relation with past and future cultural products. Adriana Răducanu’s chapter proposes an analysis of Christa Wolf’s Medea as a dynamic response to the ancient myth of Medea and to the tragedies of Euripides and Seneca, where “the unspeakable mother” is cast in the role of the detective. Codruța Goșa’s chapter investigates how the Hogarth Shakespeare project turns the Bard’s shortest and darkest tragedy, Macbeth, into a typical detective story by the master of Scandinavian noir, Jo Nesbø. Daniela Rogobete’s essay employs the tools of poststructuralism to look at the “metaphysical detective story”, a postmodernist experiment carried out by Paul Auster in Ghosts, in which he transforms the sleuth’s investigation into an ontological quest.

The four chapters in Part III, The Mainstream and the Marginal, start from the assumption that, if detective fiction has been regarded by mainstream culture as a “minority” genre, then this alleged aesthetic label may be on a par with socio-cultural labels that also seek the regimentation of groups and communities as “minoritarian”. This section of the book analyzes crime novels which convey a message about African-American, Jewish-American, and South African cultures. Loredana Bercuci’s chapter looks at Chester Himes’ novel Blind Man with a Pistol (1969) and Ishmael Reed’s Mumbo Jumbo (1972), two books which, despite their extensive use of postmodernist techniques, are rarely considered exemplary works of postmodernism, being therefore “minoritarian” both in an ideal literary hierarchy and because their anti-detectives reveal an important message about African-American culture in the 1960s and 1970s. Cristina Chevereșan offers a two-fold reading of Philip Roth’s The Ghost Writer (1979), in which the protagonist’s investigative work has repercussions both in his fiction and in his real life. The book is presented as a psychological mystery which explores individual and communal identity and revisits Roth’s major themes of Jewishness and Jewish history. Gabriela Glăvan’s essay considers another novel by Philip Roth, Nemesis, a fictional account of an outbreak of poliomyelitis and written as a mystery novel with a plot that closely resembles a detective scenario. Luiza-Maria Caraivan’s chapter examines various South African novels from the colonial and Apartheid periods, which are the support on which twenty-first-century, post-Apartheid crime fiction relies.

The last section of the book, A Genre on the Move, and its three chapters prove that the impact and popularity of whodunits have increased since the genre has moved towards other media, including cinema and television. Stephen Tapscott’s chapter presents Orson Welles’ Citizen Kane as a multimodal experience, a story which mixes genres from literary history and from cinema, while remaining centrally a detective story. The contributor argues that the film was the result of the director’s mixed experience with the classical whodunits of Agatha Christie and the powerful, dark adventure stories of Joseph Conrad. The last two chapters argue that science has legitimized crime fiction since the nineteenth century and continues to do so more or less wittingly. Andreea Șerban compares two TV series from the police procedural subgenre, The Mentalist (2008-2015) and Lie to Me (2009-2011), in which truth is claimed to be proven by high-tech science, but in fact lies more in the ingenuity of the police consultant, a professional called to help the detective, usually a psychologist, therapist, or psychiatrist. Claudia Eliza Filimon’s chapter presents a film adaptation of H.G. Wells’ science-fiction novel The Invisible Man, which changes the perspective, from the stalker to the victim. The thriller sheds new light on a story about science at the service of a human being’s darkest manifestations.

Tackling the best known authors in the genre, as well as marginal, forgotten, or eccentric names, and discussing prose which fits perfectly in the pattern of the genre and texts which have been conventionally associated with other genres, as well as films, Towards a Theory of Whodunits: Murder Rewritten revives the impact of whodunits in both highbrow and popular culture.

Dana Percec is Professor in English Literature and a PhD supervisor in the same field at the West University of Timisoara, Romania, where she teaches Elizabethan drama, Victorian literature, and literary translation. She is the author and editor of several books and collections of essays in English and Romanian, as well as a member of the Romanian Writers’ Union and other Romanian and international professional organizations. She has also published 50 articles and chapters in various journals.

Towards a Theory of Whodunits: Murder Rewritten is available now in Hardback at a 25% discount. Enter the code PROMO25 to redeem.