The Impact of Overbuilding on People and the Planet 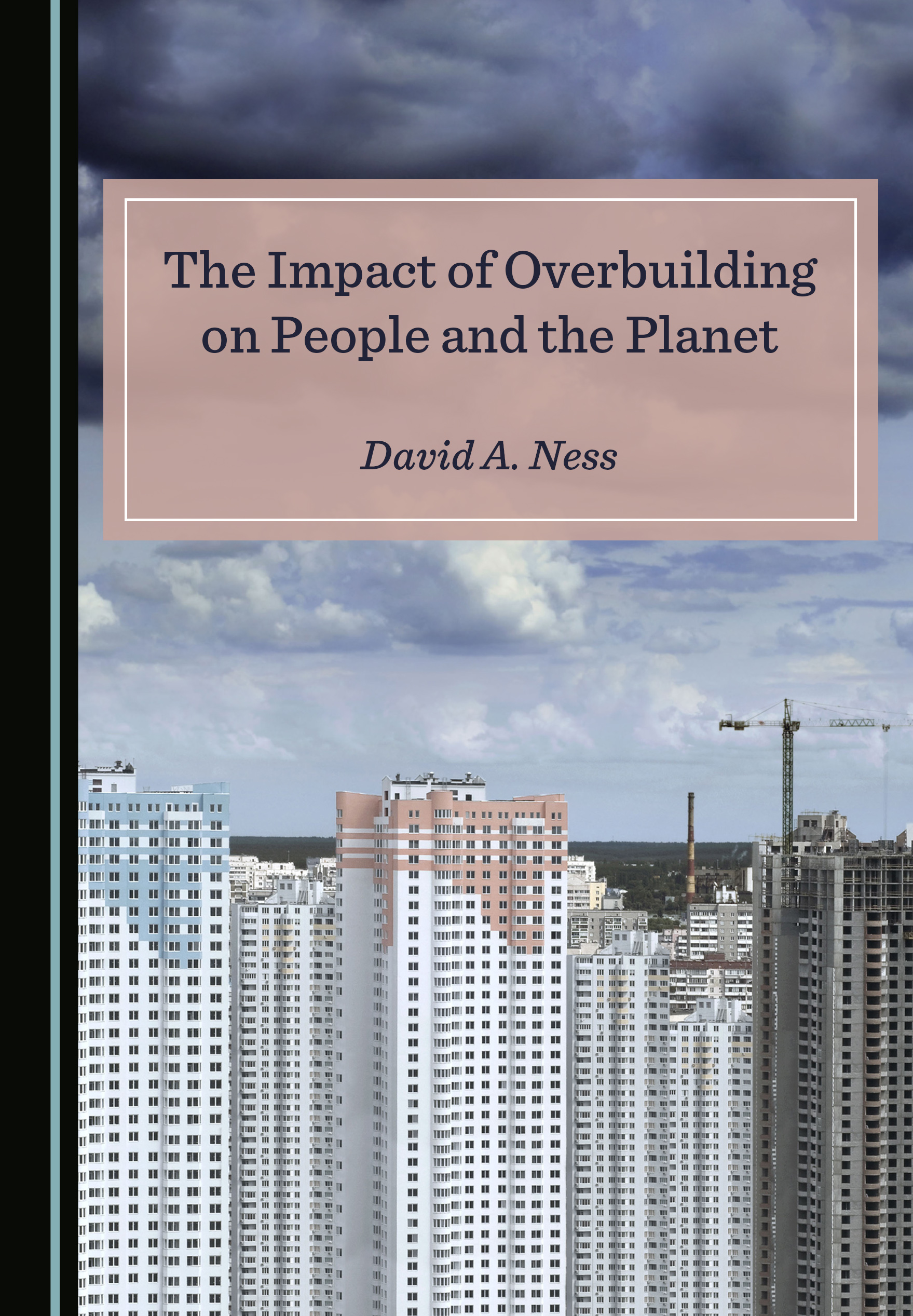 By David A. Ness

The world is approaching the tipping point at which the Paris target of limiting temperature rise to 1.5oC will become out of reach. This calls for unprecedented actions, beyond those taken so far that protect economic growth and avoid disrupting high-consuming societies. Policies must now shift to reducing absolute consumption within the biophysical limits of the planet, especially as efficiency measures and adoption of renewables have proved inadequate. Over-consumption, especially in wealthier societies, is indicated by increasing per capita floor area, which outpaces any efficiency increases. As recently emphasised by Dr Yamina Saheb, lead author of the IPCC Working Group III on Climate Change Mitigation, ‘sufficiency’ should take precedence over efficiency and renewable resources, via a set of policy measures and practices that avoid the demand for energy, materials, land, water, and other natural resources, while delivering well-being for all within planetary boundaries. In this regard, building and infrastructure—together responsible for around 50 per cent of resource consumption and 40 per cent of emissions—warrant special attention.

The International Energy Agency has estimated that the total gross area of the built environment will need to increase 173 per cent by 2050, while the OECD predicted a doubling of material consumption by 2060. Acknowledging that “buildings are bad for the climate”, Bill Gates dramatically highlighted this frenetic rate of building, estimated by others to be “the equivalent of putting up another New York City every month for the next 40 years”. However, this begs the question, “is this massive rate of new building really required?”, as it seems far from sustainable. It is also forecast that most building activity will need to occur within the Global South, to provide services, shelter, and infrastructure for fast-growing populations. As the North is comparatively well-endowed with facilities and amenities, it may be argued that it should drastically shrink its rate of new constructions, while focusing on adapting or retrofitting its existing stock. Such a ‘rebalancing’ strategy may enable more equitable per capita consumption, as well as production of carbon within global limits.

We should also question the type of buildings being constructed, especially commercial real estate that is often based on speculative and capitalist greed rather than real needs. Moreover, as our response to COVID-19 has shown, many business and other transactions may now be undertaken by digital means accompanied by remote or home-based work. Ethically, it seems inappropriate to build resource-consuming and carbon-emitting monuments to greed, while many lack basic shelter and human needs.

In this regard, The Impact of Overbuilding on People and the Planet puts forward a theory and manifesto for the construction sector and its clients to make this dramatic shift. The book (recently released in paperback format) exposes the ‘elephants in the big green room’, by challenging the status quo where profligate building and urban development is described as ‘green’ and ‘low carbon’. This points to the need for reform of green building rating tools, which have focused on operational energy and carbon intensity per square metre. Existing rating methods are being modified to account for carbon embodied in production and construction, but these tend to focus on low carbon materials while overlooking the bigger picture of overall building size. A major shift is required to recognise that “big and green do not sit well together”, accompanied by new ‘sufficiency-based’ assessment methods and tools that foster absolute reduction in consumption and carbon via metrics such as floor area per capita or per service unit.

It is noteworthy that carbon budgets, based upon top-down allocations for countries and sectors, are currently being introduced in parts of Europe. These are likely to presage major changes in the building and property sector, which currently seems to operate under the premise that ‘building more and bigger is best’. Further questioning and research is required of decision-making within the property sector, where expanding supply is seen to precede demand, which is then expected to catch up. Government policies also demonstrate a belief that more cranes on the skyline symbolise increased prosperity, overlooking the job-creation, environmental, and other benefits of regeneration of existing spaces and stock. The advent of carbon pricing should advantage the latter, where carbon is already ‘sunk’ or spent, whereas the former will incur the cost of new carbon generated in construction.

One of the most important contributions of the book is the theory put forward in Chapter Seven. While existing approaches involving life-cycle analysis, resource efficiency, and circularity are positive, it is argued that much more is required to stem the massive oversupply and its serious impacts on people and the planet. Following discussion of integrated systems thinking, urban metabolism, and strategic asset management, accompanied by the presentation of a conceptual model, it is strongly argued that “our focus should shift to services”. Not only does this involve comparing alternative pathways for providing the same service with lower resource needs, but also questioning service demands in the first place. It cites Professor Julian Allwood, head of the ‘Use Less Group’ at Cambridge University, who highlighted that “reduction in service demand is the ‘gold medal’ of environmentally motivated materials management”. In parallel with overall demand reduction, Allwood emphasised that rebalancing between current rich and poor is required.

This leads to a discussion of ‘sufficiency, saving, and sharing’, which strongly accords with and amplifies the message of Yamina Saheb, as highlighted above. It reminds us that Professor Walter Stahel, founder of the circular economy, also advocated sufficiency and zero-options, a fact which is often subsumed by the interest in recirculating materials and other resources. Again, it cites Allwood who pointed out that that “if demand is growing, the circle cannot remain closed”. A more important priority may be to reduce the rate at which new material is acquired.

The book also questions the ethics, equity, and sustainability of continued growth of the building stock in industrialised contexts amid diminishing demand, whilst the Global South is deprived of basic resources and infrastructure. Even a ‘circular’ built environment may not go far enough, at a time when dramatic reduction in consumption of resources is required to meet ‘sufficient’ service levels and global accords related to climate, biodiversity, and the Sustainable Development Goals. More socio-economic value may be derived from built resources by their stewardship, adaptation, reuse, and equitable sharing, with increased questioning of the need to build at all.

By taking a wider perspective of a sustainable built environment, the text—illustrated by case studies from the Olympics and nine countries—aims to reframe the policy debate and reform current approaches through a new theory and manifesto. It is expected to appeal to policy makers, architects, urban designers, green building practitioners, educators, and students, particularly those who wish to explore this increasingly important topic in depth.

With radical behavioural and consumption changes being on the agenda for the COP26 ‘Cities, Regions, and Built Environment’ event to be held on November 11, 2021, in Glasgow, one hopes the message of this book may be heeded.

Dr David A. Ness is an Adjunct Professor at the School of Natural and Built Environments, University of South Australia. He has over 65 publications to his credit, including 40 articles and book chapters and two co-authored books. His research focuses on delivering more services with less resource consumption and less cost, applied to products, buildings and infrastructure. In seeking to adapt the circular economy concept to the built environment, he leads an ARUP Global Research Challenge project on reusing building components via Cloud-enabled services.

The Impact of Overbuilding on People and the Planet is available now in Paperback and Hardback at a 25% discount. Enter the code PROMO25 at checkout to redeem.