Literature, Theory and the History of Ideas 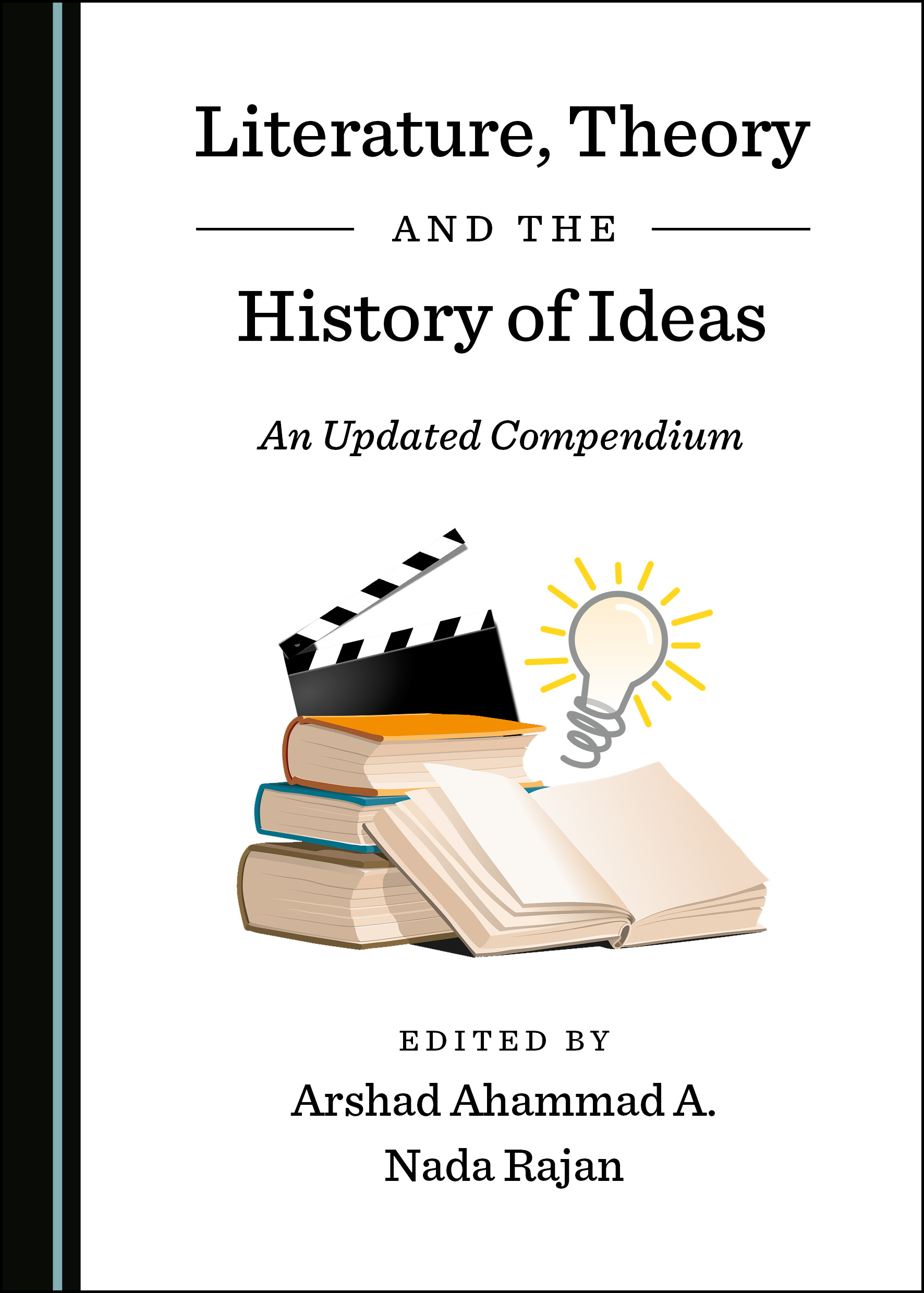 Edited by Arshad Ahammed A. and Nada Rajan

Literature, Theory and the History of Ideas, as a compilation of essays by a variety of authors, transcends disciplinary boundaries by engaging diverse disciplines into productive dialogues with each other.

The papers in this edited volume cover various themes, including history, globalisation, colonialism, trauma, ecology, cinema, science, post-humanism, feminisms, and alternative sexualities. These essays explore the structures of power that bring about and contour the popular, stereotypical, and hegemonic ideas of identity, gender, and culture. The crucial element of these interactions is the unending distribution of ideas which kindle the knowledge system with its roots spread across diverse scholarly disciplines.

The essays are written both by renowned academicians and by some promising young teachers and researchers, and offer new dimensions of critical thought and new meanings of texts and practices. This compendium also consists of two interviews: one with the famous British social theorist Jonathan Dollimore, and the other with the Pakistani-British novelist and short story writer Qaisra Shahraz.

Popular genres and literary texts arbitrate modifications in ideas and ideologies over a period of time. This negotiation consecutively motivates these works and genres to act as testing grounds for ideas and their creative and critical embodiments. As such, the acquired readings of the narratives of the past are renovated and new meanings are received. Rather than appearing as a bit of plain written or printed content, literature stands as experience fixed in texts. The various writings and forms thus stem from a public structure of knowledge, and interact and produce new cultural and philosophical frameworks.

Cultural studies is a field of theoretically, politically, and empirically engaged cultural analysis that contemplates the political dynamics of culture, its historical foundations, defining traits, conflicts, and contingencies. Cultural studies researchers generally explore the manner in which cultural practices relate to wider systems of power associated with, or operating through, various social phenomena. The discipline visualises cultures not as fixed, bounded, stable, and discrete entities, but as constantly interacting and shifting sets of practices and processes. The myriad themes explored in this anthology bring in the remarkably political function that the theoretical ground of cultural criticism can carry out in the current environment of multidisciplinary studies and research. Meena T. Pillai’s interaction with Jonathan Dollimore draws attention to the shapeless character of desire and the fluid relations between it and identity, as well as the import of a politics of sexual dissidence. She avers that Dollimore’s critical investment in sexuality and queer studies since the 1990s has radically politicised and pluralised the received notions of desire.

Joseph Dorairaj’s article attempts to define the term ‘hermeneutics’ as a key concept in theology, philosophy, and literary theory. Saji Mathew tries to problematise the adoption of domestication strategy interpolations in translation in a cultural critique of the Malayalam translation of John Bunyan’s Pilgrim’s Progress by Hermann Gundert, the nineteenth century German missionary and scholar. Aswathy G. Babu looks at hair as a powerful and substantial cultural artefact, and explicated the manner in which hairstyles are often employed as a potent tool that reflects a variety of issues. Najila T. Y. explores the implications of globalisation for national or cultural identity and contemporary literature. Her article considers the way national identities are reasserted in new forms and contexts, in spite of the homogenising forces of globalisation.

The issues of resistance, gender justice and marginalised sexualities set against varying mindscapes are detailed in some essays. I attempt to explore the themes of shame, honour and sin—both personal and collective—in Qaisra Shahraz’s novel Typhoon. My interview with Shahraz unravels her experience as a creative writer. She talks about the challenges facing women in Pakistan villages and their fictional representation in her novels and stories. Abida Farooqui endeavours to trace the agency of the transgender in Arundhati Roy’s second novel, The Ministry of Utmost Happiness (2017). Her essay argues that instead of presenting transgenders as passive recipients of an inhuman system, the novel depicts the life of the protagonist as one of bold choices and seditious political acts. Susy Antony deals with the issues of gender, sexuality, and spirituality in Yasmina Khadra’s The Swallows of Kabul (2004). She identifies the spiritual infertility in the society that infiltrates the personal lives of the main characters and creates mayhem in their lives. Bhagyalekshmi Mohan examines the short stories of a few women writers of Kerala that resisted stereotyped notions of the ‘modern colonial widow’, and reconstructed widow figures as proactive women who became a part of the independent Indian economy.

Three chapters surgically examine personal and collective trauma as depicted in three different novels. The article by Rubeena S. is an attempt to explore the autoethnographic aspects manifested in Sally Morgan’s novel My Place, as well as to analyse the scope of the genre in articulating the unspeakable and documenting the untestified in history. Jinju S. analyses the transfer of transnational and transgenerational trauma in Jonathan Foer’s post-9/11 novel Extremely Loud and Incredibly Close (2005). She expounds the novelist’s endeavour to link the catastrophe with other historical upheavals such as the Allied bombing of Dresden and the Hiroshima and Nagasaki atomic bombings during World War II. The article asserts that reading the novel as a subjective version of a child’s distress, devoid of any political commitment, totally neglects the restrained, yet prevailing, nuances of politico-historical sensitivity in the narrative. The article by B. Sajitha attempts to study the impact of Rape Trauma Syndrome and Post Traumatic Stress Disorder (PTSD) on a victim in Laurie Halse Anderson’s novel Speak. It also explores the stages through which the protagonist reconstructs herself towards empowerment and eventual recovery.

The interconnection between science and the humanities is considered in two chapters. Arya Mohan’s article on Charles Darwin’s On the Origin of Species seeks to bridge the gap between the two cultures of science and the humanities by explicating the metaphor of a garden, a negotiation between the ‘wild’ and the ‘civilised’, and a meeting place of nature and culture. Gigy J. Alex’s article seeks to investigate the evolution of the post-human in the context of Mary Shelley’s Frankenstein (1818) and Octavia Butler’s “Bloodchild”. Science fiction discourse could be considered as a connecting link between science and humanities. From an age where a scientist was considered a demigod, we have moved to an era where he is only a link in the network of actors where each constituent agent is interlinked.

The last four chapters critique a few Malayalam films. Aswathy V.N. explicates the psychoanalytical concepts of rejection and projection in the three movies of Lijo Jose Pellissery. Pellissery’s characters visualise a chaotic world where men reject the normalities of civilisation and project their inner promptings at will. Instead of repressing their elementary desires, the characters revel in animalistic, primordial behaviours, and consequently meet a self-imposed destiny. Rafseena S. writes about the film Paradesi (2007), set against the backdrop of the Malabar region of South India, which highlights the traumatic incidents in the lives of those who hold a Pakistani passport and are hunted and harassed by the Indian authorities as non-natives. Sarath S. analyses the unconscious and semiconscious patriarchal concepts of female bodies that surface in the movies of Jeethu Joseph. The article looks at the three gazes purported by Laura Mulvey—the perspectives of the camera, the audience and the characters, respectively. Aravind S. G.’s article focuses on the exploration of marginalised and reconfigured masculinities in commercial Malayalam films of this era. He looks at the manner in which ‘alternative’ performances of masculinity offer spaces to challenge their hegemonic counterparts and re-read conventional masculine practices and societal roles.

This compendium engages in dynamic discussions on the social, political, cultural, and philosophical dimensions of literature, theory, and the history of ideas, which, I hope, will attract both the curious student and the learned reader. Altogether, this collection will be of great interest to academicians, scholars, researchers, and students, as it explores various discourses in literature, cultural studies, literary theory, and film studies.

Arshad Ahammad A. is Assistant Professor of English at M.S.M. College, Kayamkulam, India. His research interests include literary and cultural theory, narratology and historical fiction. He has completed doctoral research on the representation of religious history in historical novels and submitted his thesis to the University of Kerala. He is also the author of a number of journal articles, and acted as the guest editor of the December 2019 issue of Littcrit, an internationally acclaimed research journal from Kerala.

Nada Rajan is Assistant Professor of English at M.S.M College, Kayamkulam, India. She is currently pursuing her PhD on Prison Narratives at the University of Kerala. Her areas of interest include film studies, literary and cultural theory, media studies and life writing. She is the author of Spotlight, a book on film studies, and has published a number of research articles.

Literature, Theory and the History of Ideas: An Updated Compendium is available now in Hardback at a 25% discount. Enter PROMO25 to redeem.