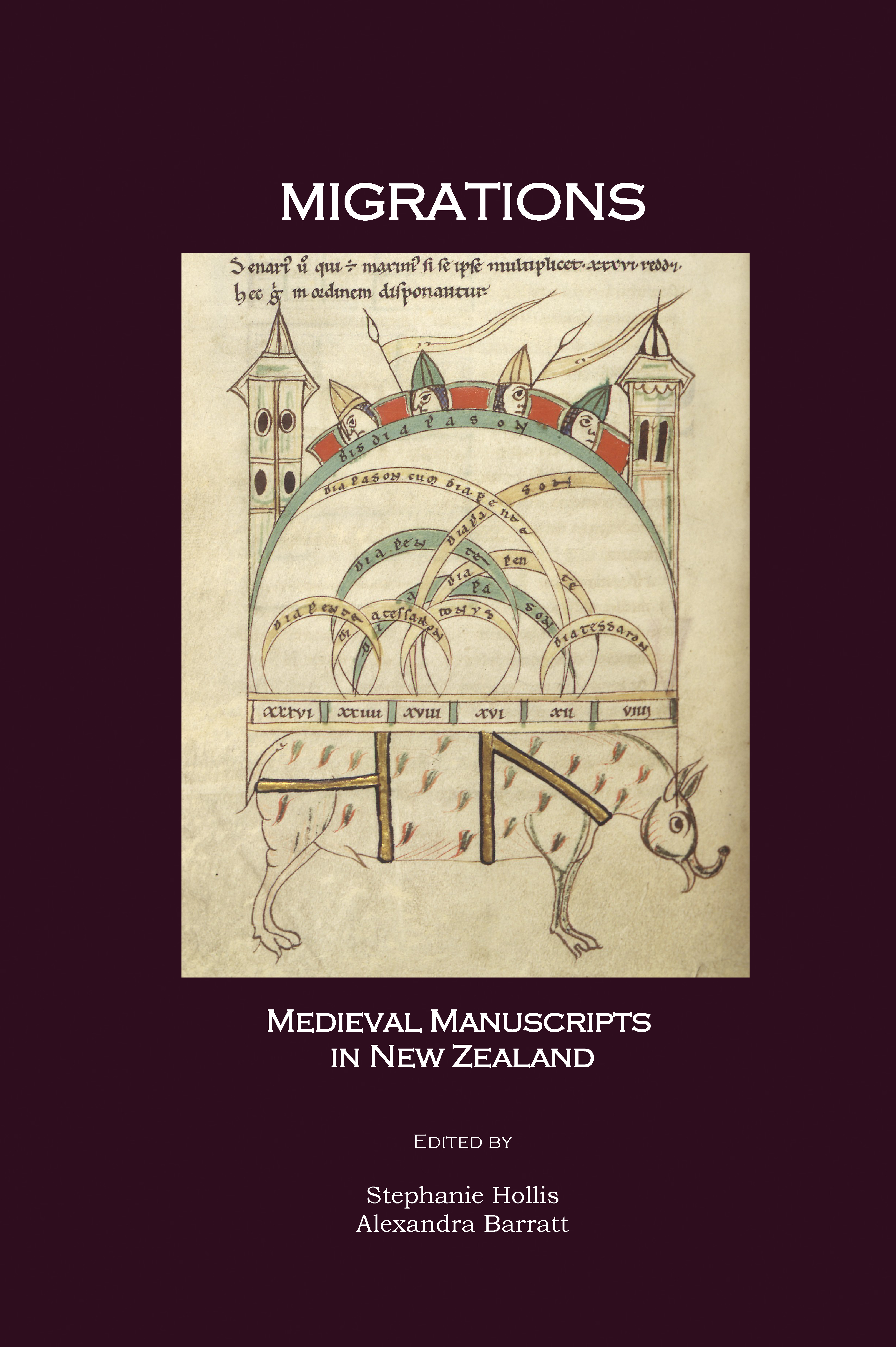 Over two hundred items are catalogued in Medieval and Renaissance Manuscripts in New Zealand Collections (1989). Most are in institutional collections and were donated by late nineteenth- and early twentieth-century book collectors, notably Sir George Grey (1812–98), Governor and later Premier of New Zealand. Having been transported across the globe, the manuscripts have remained, for the most part, beyond the purview of northern hemisphere scholars.

The contributors to this interdisciplinary collection of essays include international experts such as Christopher de Hamel, Richard Gameson, Margaret Manion and Michael Orr, curators of New Zealand manuscript collections, New Zealand academics, and a PhD student.

Migrations has two main aims: to lodge the Early European manuscripts in New Zealand within the international discourse of postcolonial heritage; and to place them within the mainstream of manuscript studies by drawing attention to their intrinsic significance and their relationship with manuscripts held in overseas collections.

Part One focuses on the motives and historical circumstances underlying the formation of the principal collections and the subsequent changes in the ways that this heritage has been regarded. Three of the essays centre upon the bibliophiles who donated their manuscripts to public libraries. Others consider specific manuscripts as indices of changing attitudes to European, particulary British, cultural heritage. National identity, pedagogy, and curatorial practices are among the issues canvassed.

Part Two consists of new scholarly studies of particular manuscripts, which examine them in relation to the cultural and documentary context in which they were produced or transmitted. Manuscripts studied include: a twelfth-century copy of music treatises by Boethius and Guido of Arezzo, probably from Christ Church, Canterbury; a Perugian breviary owned by an Augustinian friar, Antonio da Macerata; a book of hours adapted for Scottish use (the Rossdhu Hours); and a fragment of an early fifteenth-century book of hours produced by a London workshop and added to the Hours of Margery Fitzherbert.

“Migrations is an imaginative and ambitious contribution to twenty-first-century manuscript studies. Most notably, the editors have invited manuscript scholars to address the issues raised by the manuscripts' location: New Zealand itself and its colonial history become tools for thinking with - about dispersal, about cultural memory, about access, about the meanings ascribed to artefacts. The editors have assembled a distinguished group of scholars in order to produce a collection of essays that is a coherent whole and at the same time individually driven by the intellectual curiosity that is the true sign of distinction. The book is a triumph.”

“This excellent book makes a major contribution to the study of medieval manuscript collections in New Zealand, and will open up a little known area of extremely important material to an international audience. The quality of the scholarship throughout the book is very high, and the essays on the individual manuscripts present the material in the context of recent new approaches in the study of medieval and Early Modern manuscripts.”

Stephanie Hollis is Director of the Centre for Medieval and Early Modern Studies at the University of Auckland, and is the author of Anglo-Saxon Women and the Church. She has contributed to the Anglo-Saxon Manuscripts in Microfiche Facsimile Series and is a member of the Australian NEER Research Cluster on Manuscript Studies.

Alexandra Barratt is Professor of English at the University of Waikato. She has published several editions of Middle English texts, including Dame Eleanor Hull’s translation of a commentary on the Penitential Psalms, and an anthology, Women’s Writing in Middle English. She is currently working on a study of British Library, MS Harley 494, to be published as Anne Bulkeley and Her Book in Early Tudor England.