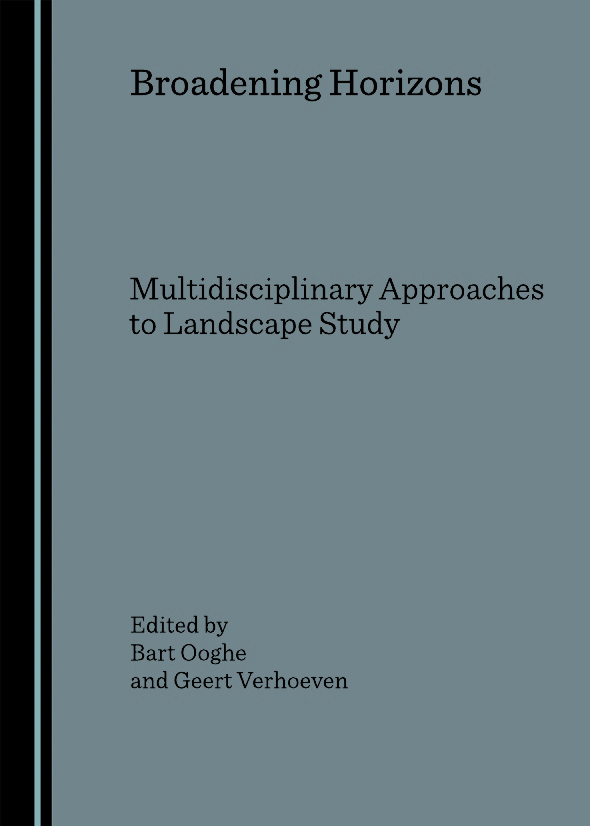 ‘Broadening Horizons: multidisciplinary approaches to landscape study’ presents nine papers on physical landscape research in the Mediterranean and the Near East. Giving prime place to young researchers working in this field, it brings together highly diverse applications ranging from ground survey to semi-automated remote sensing, from cuneiform studies to palynology and from human geography to paradigm re-evaluation.

Aimed at a public of both students and scholars with a shared interest in the study of past landscapes, its aims are dual. In presenting ongoing research which applies various techniques available to the student of landscape, it aims to add to the practice of these sub-fields. As such it may also provide a first insight into the particular methodologies addressed. In addition, by extending its gaze beyond geographical, temporal or disciplinary constraints, ‘Broadening Horizons’ addresses the need for a continued awareness of the many different methods and conceptualisations existing in this field. It hopes to illustrate some of the highly diverse ways in which to approach physical landscapes of the past and, by doing so, stress once again the value of continued cooperation between the many specialisations that make up this ever-expanding area of research.

"This is a very positive endeavour to improve cross-discipline awareness and collaboration. It is organised as a multi-facetted reader highlighting some of the wide ranging ways in which the past landscapes of the Mediterranean and Near East can be approached. It provides a significant contribution to the field of landscape research, and should prove of value to specialists and beginning researchers alike, both for its specific topics and its multidisciplinary approach."

Professor Dr. M. Tanret, Head of the Dept. of Languages and Cultures of the Near East, Ghent University

Bart Ooghe obtained a BA in History in 2000, a Ph. D. in Archaeoloy of the Near East at Ghent University in 2007. His research focuses on Lower Mesopotamia as described in post-Mediaeval European sources, and on the disciplinary history of Near Eastern archaeology Apart from this main research topic, his side-projects and interests relate to imagology, the conceptual place of textual sources within a landscape archaeological context and the role of travel narration in the development of Near Eastern archaeology. Organiser and chairman of the international conference ‘Broadening Horizons’ (Ghent, Feb. 2006).

Ooghe, B. ‘Felix Jones and the land behind Baghdad: site-centred study of a 19th century

Ooghe, B. ‘Book review: “A Quest in the Middle East: Gertrude Bell and the Making of

Modern Iraq” (L. Luktitz).’ Bulletin of the Association for the Study of Travel

Geert Verhoeven obtained an MA in Archaeology at Ghent University in 2002. His ongoing PhD-research studies the application of remote sensing in archaeological survey. He is also working in the fields of (digital) photography, database-design, GIS and archaeological methodology.

Verhoeven, G. 2006, Digitally Cropping the Aerial View. On the Interplay between Focal Length and Sensor Size, Archeologia Aerea. (in press).

Verhoeven, G. & Vermeulen, F. 2004, The Potenza Valley Survey: Towards an Explanation of the Settlement Patterns through the Combined Use of GIS and Different Survey Techniques, in: Magistrat der Stadt Wien – Refereat Kulturelles Erbe – Stadtarchäologie Wien (eds.), Enter the Past. The E-way into the Four Dimensions of Cultural Heritage. CAA 2003. Computer Applications and Quantitative Methods in Archaeology, Proceedings of the 31st Conference, Vienna, Austria, April 2003, Oxford, pp. 312-316. (= BAR International Series 1227)

Vermeulen, F. & Verhoeven, G. 2004, The Contribution of Aerial Photography and Field Survey to the Study of Urbanization in the Potenza Valley (Picenum), Journal of Roman Archaeology 17, pp. 57-82.