Home / Buy A Book / Social Sciences / Into the Mainstream: Essays on Spanish American and Latino Literature and Culture

Into the Mainstream: Essays on Spanish American and Latino Literature and Culture 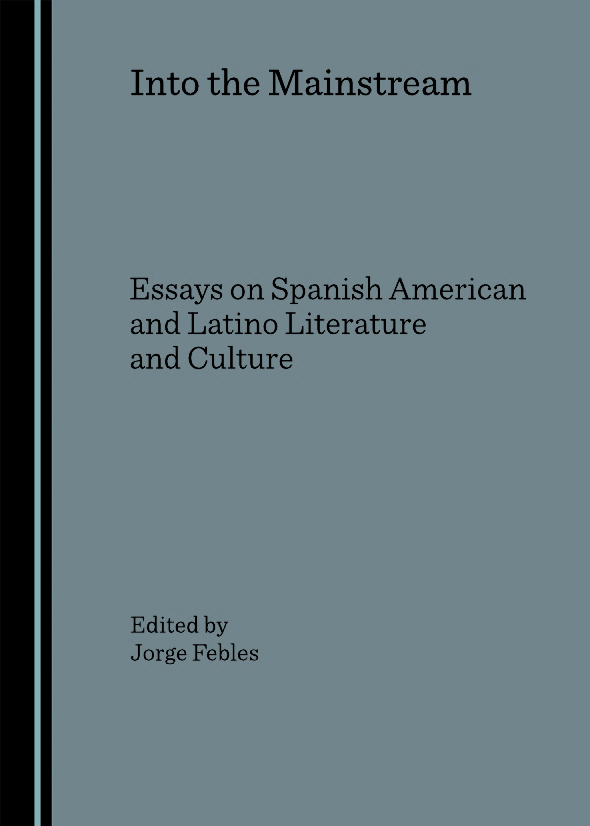 Into the Mainstream: Essays on Spanish American and Latino Literature and Culture is a direct outgrowth of Jorge Febles’s involvement with the annual conference of the American Culture Association and the Popular Culture Association. In that sense, the compilation expands on a project initiated in 1993 by Helen Ryan-Ransom with her book Imagination, Emblems and Expressions: Essays on Latin American, Caribbean, and Continental Culture and Identity (Bowling Green, Ohio: Bowling Green State University Popular Press, 1993). David William Foster, who penned a lengthy preface to that collection, justified its intent by underscoring: “The very fact that our approach to culture is dominated by categories based on high, academic, institutionalized phenomena poses from the very outset the question of how to deal with all those other cultural manifestations that do not comfortably assimilate to the accepted canon” (Ryan-Ransom 3). The past fourteen years, however, have witnessed a radical transformation of that so-called canon due to the widespread acceptance of ideas espoused by cultural theorists like García Canclini, Homi Bhabba, Said, Stuart Hall, Benhabib, Bourdieu and countless others. Therefore, the ambivalence regarding what constitutes culture identified by Foster is inoperative nowadays to a substantial degree. In fact, a fundamental component of the postmodern outlook resides in the ability to blend comfortably the high and the low, the elitist and the popular realms of production in a multiplicity of textual artifacts, creative as well as critical in nature. Hence, the essays that conform Into the Mainstream do not question barriers anymore, nor do they expound on the need to assign a discursive intellectual space to matters pertaining to popular culture. Thus, this collection espouses an inclusive approach in which a variety of analytical approaches coalesce to reflect on an equally kaleidoscopic textuality.

Pursuant to its comprehensive nature, Into the Mainstream airs established as well as developing critical voices so as to reflect both ideological continuity and evolving viewpoints. Scholars who have compiled strong academic records like Hortensia Morell, Raquel Rivas Rojas, Elsa Gilmore, David Petreman and Benjamín Torres Caballero share a venue with younger critics like Corey Shouse Tourino, Roberto Vela Córdova, Stacy Hoult, Eduardo del Río, Bruce Campbell, Laura Redruello, Dinora Cardoso and April Marshall, as well as with two graduate students about to complete their academic preparation: Nuria Ibáñez Quintana and María Teresa Vera Rojas. The result is an eclectic compilation meant to elicit discussion on the basis of its variety. Into the Mainstream’s primordial objective is to place these provocative essays—which are expanded versions of papers presented during the annual gathering of the American Culture Association and the Popular Culture Association in the period 2002-2005—along with the numerous subjects they treat in the academic mainstream where they rightfully belong.

Jorge Febles received his Ph.D. in Spanish American literature from the University of Iowa. For twenty-five years, he taught Latin American Literature and Culture at Western Michigan University, both at the undergraduate and graduate levels. In July 2006, he assumed the chairmanship of the Department of World Languages at the University of North Florida (Jacksonville). His academic interests center quite particularly on Cuban and Cuban-American literature. Although he has published extensively on a variety of subjects, the bulk of his research output gravitates around the works of José Martí, Matías Montes-Huidobro, Alfonso Hernández Catá and Roberto G. Fernández. Since 1998, he coedits the literary and cultural journal Caribe along with Armando González-Pérez (Marquette University). In addition, Patricia Montilla (Western Michigan University) and he chair the Caribbean and Latin American Literature and Culture Area of the American Culture Association and the Popular Culture Association.