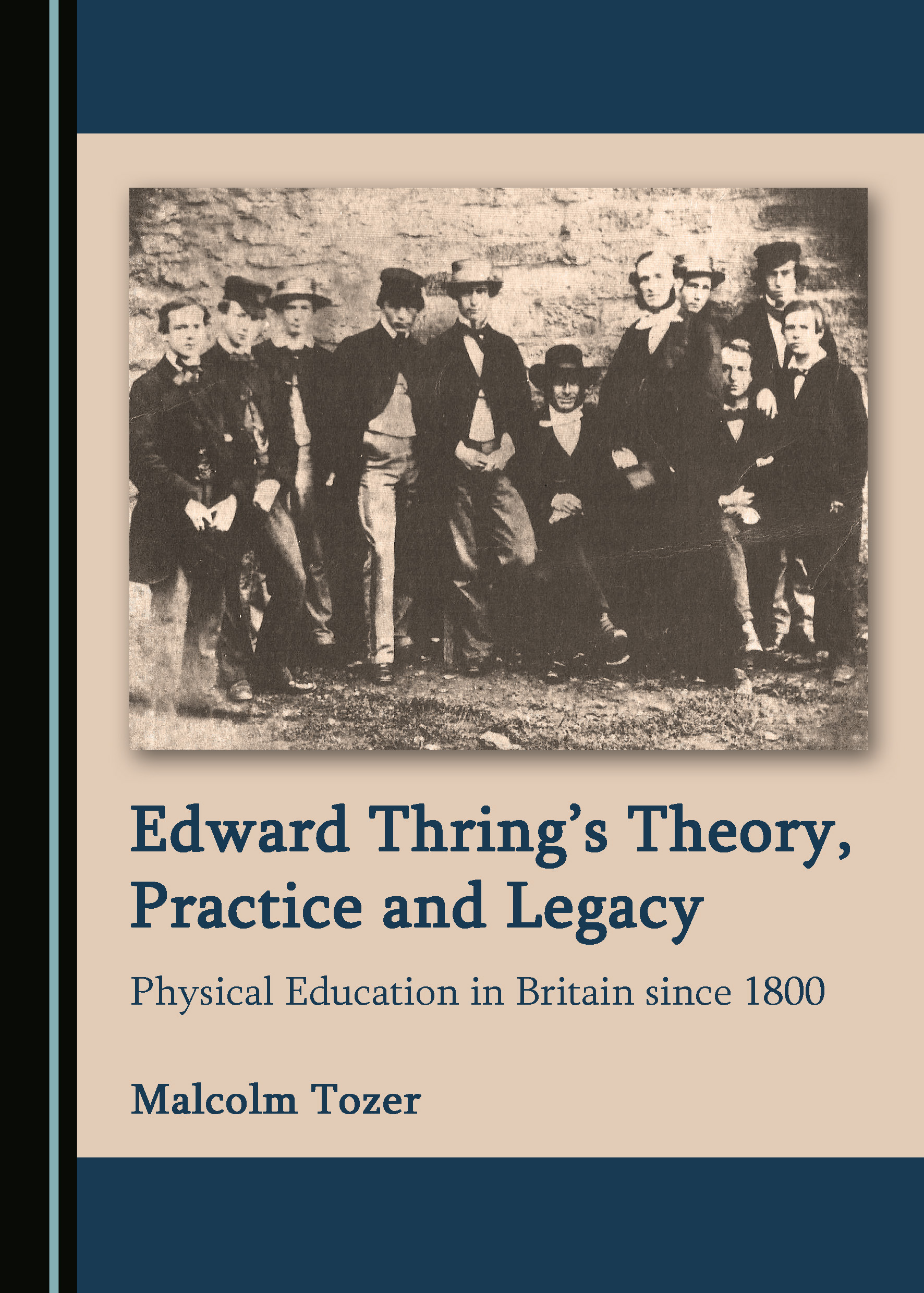 The traditional picture of a Victorian public school assumes that it was founded on Thomas Arnold, Tom Brown’s Schooldays and Rugby football. A Rifle Corps, Oxbridge Blues on the teaching staff, and an ethos of esprit de corps were all part of the system. The cult of athleticism reigned supreme.

This was not the case at Uppingham School during Edward Thring’s headmastership from 1853 to 1887. Here a balanced physical education of gymnastics, athletics, games, swimming and country pursuits flourished within a sane but revolutionary educational framework. Thring’s Uppingham, however, was an Athens surrounded by Spartan strongholds. The Spartans were kept at bay during Thring’s lifetime, but, after his death, they closed in and even claimed Thring as one of their own. His ideals were hijacked by the sportsmen and then perverted by the militarists.

Thring’s theory and practice of physical education lived on outside the traditional public schools, was adopted by the progressive school movement, and eventually found acceptance in all good schools. Its legacy can be found in the first National Curriculum for Physical Education and in all schools that value physical education as a vital ingredient of holistic education.

This book will inform trainee teachers, practising teachers and teacher trainers of the men and women who have strived since 1800 to secure a place for physical education in the curriculum for all pupils. Historians of education, gender, society and sport will find new material to illuminate their fields of study.

Malcolm Tozer taught at Uppingham School from 1966 until 1989, and served as a housemaster for fourteen years. For six years from 1989, he was Northamptonshire Grammar School’s first Headmaster and then Headmaster of Wellow House School for a further ten years. Since retiring in 2004, he has led inspections for the Independent Schools Inspectorate, served as a governor at Repton School and Foremarke Hall, and promoted partnerships in physical education and sport between state and independent schools. He is the author of The Ideal of Manliness: the Legacy of Thring’s Uppingham (2015) and editor of Physical Education and Sport in Independent Schools (2012).

“Malcolm Tozer’s latest publication on former Uppingham headmaster Edward Thring’s influence in English education provides a welcome continuation of the work found in his The Ideal of Manliness (Portscatho, 2015). Where Manliness concerned itself with the institutionalisation of strict moral codes in English public schools, Edward Thring’s Theory instead focuses on the domestic, international and interpersonal trends underpinning physical education in schools. […] As is to be expected of Tozer, the book is well researched, thoroughly engaged and well written. For historians of education, its benefit lies in its focus on the inner machinations of the school and how school policy is guided by a variety of individual and societal concerns. […] Using Uppingham as the case study, Tozer reminds us of the demands and dreams brought to bear on schools by parents, administrators, politicians and students. It would be remiss not to commend Tozer’s use of school pamphlets, songs, speeches, images and schoolboy reminisces within the work. Throughout the monograph, great efforts are made to explore the implications of physical education at both the policy level and the personal level. The implication of headmasters’ decisions are made manifest in the approval, and often disapproval of the staff, students and outside observers. This intimate view of students’ or educators’ experience gives the book a level of insight often missing in studies of physical education which tend to focus more on policies than personalities. […] For historians interested in the institutional underpinnings of physical education in Britain, for those interested in the transnational elements of British education and for those interested in the inner workings of the English public school across time, Tozer’s work will not only prove of interest but will act as a motivator to continue research in this field. For the sheer depth of research alone, his latest study has the potential to act as both a reference guide and a stepping stone for more work in this field. As Tozer has shown, there is much to be gleaned from the history of physical education.”
Conor Heffernan
University of Texas at Austin; History of Education, 49:5, 2020

“Tozer relishes sharing with his readers that Thring went about his work by advocating an holistic education. […] What marked Thring out from others who looked to use sport to drive their schools forward was the breadth of his PE programme. It encompassed recreational country pursuits, as well as gymnastics, swimming, athletics and games. […] In this, as in his promotion of music and art in the curriculum and in his consistent belief that every child matters, Thring is strikingly modern. The blurb on the back cover suggests Directors of Sport, trainee teachers and historians of education, gender, society and sport should read it. In fact, it has much to say to headteachers and senior leaders too, about the balanced curriculum, about creative pupil leadership and about sport as just one of the co-curricular enterprises that deserve their support. Reading Tozer is stimulating. Like all good authors, when he doesn’t have the answer, he sets the reader the right question.”
Dr Joseph Spence
Master of Dulwich College, UK; Conference & Common Room

“The public school has often been written about in institutional terms but Tozer uses evidence to allow the reader to glimpse personalities and attitudes both within its walls (staff and pupils) and beyond (parents, politicians and observers). He illustrates his arguments with an appropriate use of reminiscences, school magazines, songs, and speeches. Unlike much academic writing on public schools, Tozer takes us past the First World War and into the twenty-first century. This allows him to comment on some broader issues such as the expansion of physical education for women and the reinvention of the wheel as educationalists accepted Thring’s ideas that physical education was a development tool rather than one of discipline. Although he was not acknowledged by the instigators, Tozer postulates that the National Curriculum for Physical Education owed much to Thring’s legacy from Uppingham. As always Tozer writes an entertaining, informative and readable narrative which makes a significant contribution to sports, physical education and educational history.”
Wray Vamplew
Global Professorial Fellow, Academy of Sport; University of Edinburgh

“Edward Thring’s Theory, Practice and Legacy is a valuable and much-needed contribution to historical study of physical education. Tozer’s grasp of his historical material is always assured as he leads us through the highs and lows of Thring’s mission to establish his vision of physical education at the centre of school life. […] Moreover, he provides a masterclass on how to tell a good story while presenting a balanced, evidence-based account of the development of educational ideas and the people who made them. Tozer provides an important counter-point to traditional assumptions about the historical influence and legacy of the independent school sector. […] He argues that recent modern ideas about physical education, from the 1970s to the present, owe more to Thring’s theory and practice than to the much vaunted ‘cult of athleticism’ commonly associated with Thomas Arnold. Thring’s emphasis on what we would now call ‘inclusion’, for example, is very much a preoccupation of contemporary scholars and practitioners of physical education around the world as we are faced with increasing diversity in schools.”
Professor David Kirk
University of Strathclyde, UK; Physical Education Matters

“As ever with a Malcolm Tozer volume, it has been wonderfully and dutifully researched, well written and has a cover design which just begs to sit on the shelves of everyone already steeped in the subject […] or those who are studying the subject at A or Degree level. This is a superb read - and I commend it most highly.”
Paul Jackson
Prep School Magazine

“Those familiar with Malcolm Tozer’s previous works on Thring will not be surprised to know that this very readable, elegantly produced and delightfully illustrated book fully meets its author’s goal of furthering our understanding of Thring, his practice and his legacy. [T]his refreshed and refreshing account of Thring, Uppingham, and the history of physical education in Britain since 1800 provides an important and timely re-evaluation of the role of physical education at Thring’s Uppingham, while further examining the legacy of that role in the present practice of physical education. […] As a bonus, Tozer’s new analysis offers some further intriguing questions: could physical education really have a more secure future within the National Curriculum if its history were better understood and the importance of Thring’s legacy more fully appreciated by current physical educators and educational policy makers? [W]hen physical education’s place in the school curriculum is under increasing scrutiny and pressure, Tozer sensibly reminds us that Thring’s insistence upon nurturing the talents of each individual pupil is central to any purposeful curriculum; and that physical education is a central component of that curriculum. As such, I echo Tozer’s hope that this book will indeed inform teacher trainers, trainee teachers and practicing teachers about the men and women who have striven since 1800 to sustain a foothold for physical education in the curriculum for every pupil in British schools; and chief amongst them, Edward Thring.”
Professor Timothy Chandler
Towson University, USA; Sport in History

“Tozer details through a meticulously researched and eminently readable case study Thring’s influence not only on Uppingham School, but on physical education more widely since. What Tozer does so effectively is to locate the history of Uppingham and Thring within the context of the history of education in England, melding a rare level of detail with a broader picture of how education has unfolded over time. For those interested in the history of education and an understanding of physical education today, Edward Thring’s Theory, Practice and Legacy offers a valuable, new perspective.”
Dr Adam Morton
Loughborough University, UK; History of Education Researcher

“For anyone with an interest in physical education or education more widely in England, English public schools or even English history in the Victorian era, there is much to recommend in this book. For those studying physical education or sport at the undergraduate or postgraduate level, this moves from recommended reading to required reading. There is enough here in terms of research alone, that the book can be seen concomitantly as both an invaluable source for locating works and for exploring other areas worthy of academic inquiry.”
Dr Alexander Roper
International College of Management, Sydney; The International Journal of the History of Sport

“While the aim of Malcolm Tozer’s meticulously researched, balanced and beautifully written book is clearly to explore Thring’s contribution to modern PE, in doing so he successfully deconstructs some of the generally held truths about public schools and the institution’s role in the development of the subject. … [He] makes clear the contrast that some historians failed to grasp: ‘Thring’s Uppingham was an Athens surrounded by Spartan strongholds’. He … transports the reader to that time and place through vivid descriptions, colourful anecdotes, and a wealth of other first-hand accounts and primary sources. I highly recommend this book for … PE undergraduate and postgraduate programmes. Many students are misinformed about the impact of the public school in relation to PE. … The ideal antidote to this is Malcolm Tozer’s balanced historical account of the life, work and legacy of Edward Thring at Uppingham. … If we cannot learn from the remarkable 34 years that Thring gave to Uppingham School and the legacy he gave to PE more generally, I contend that the PE community will fail to make an effective and reasoned case for the future of the subject.”
Ruan Jones
Senior Lecturer, Leeds Beckett University; Sport Education and Society