Home / Buy A Book / Social Sciences / The Failure of Augustus: Essays on the Interpretation of a Paradox

The Failure of Augustus: Essays on the Interpretation of a Paradox 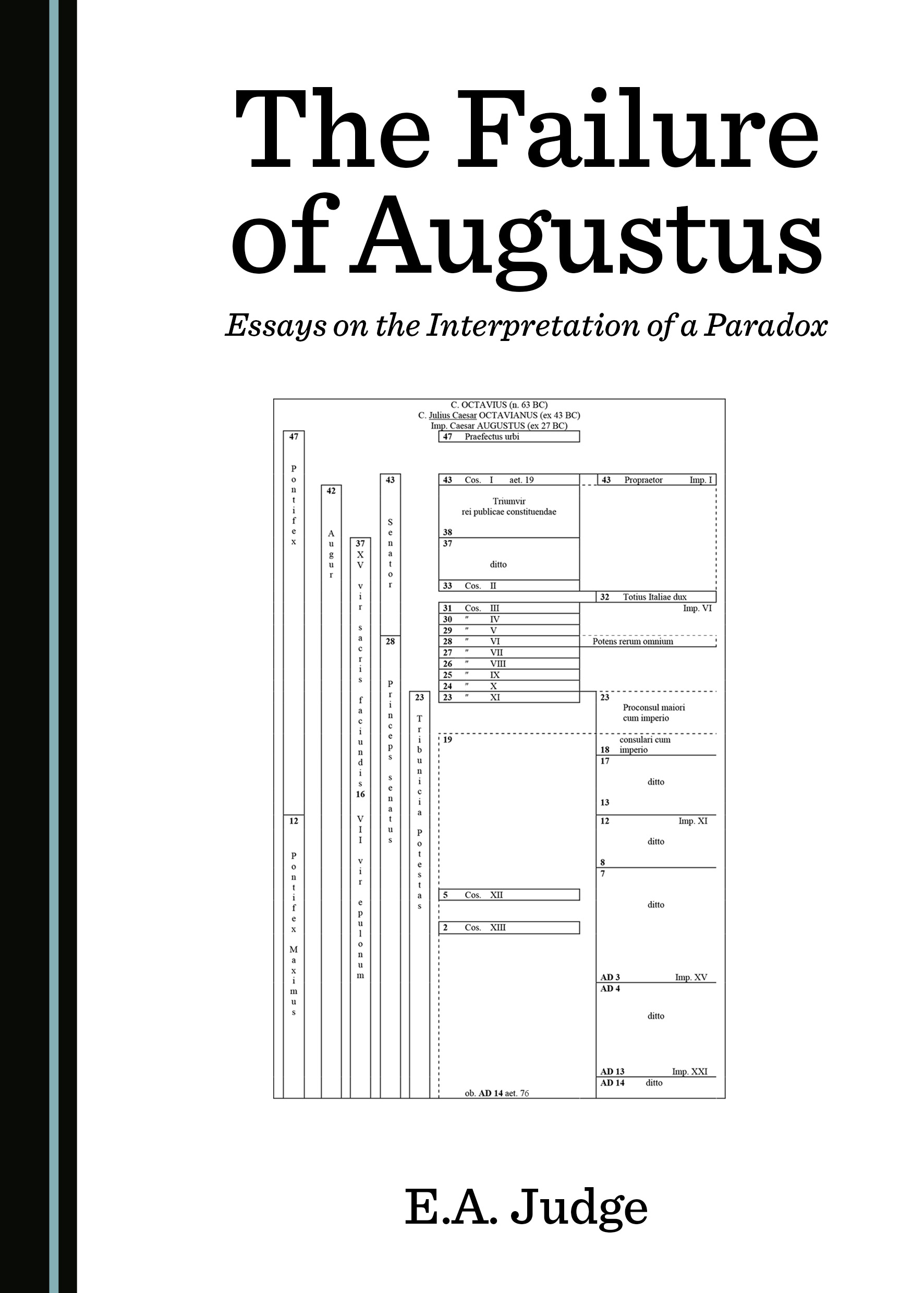 Augustus did not mean to become the “Founder of the Roman Empire”. We only say this to make sense of what happened later. At the time, there were indeed suspicions. However, Augustus plugged on with his propaganda, with a proud and clear aim in mind. In the end, though, his own persistence defeated him.

In all history, we must first find out what was true at the time. This book focuses always on the particular words of Augustus, and how his mind could be read from them. It is not concerned with any contemporary focus of research in Augustan studies, but offers, rather, a sustained argument over the primacy of the original sources in any historical interpretation. Behind that lies the question of truth itself in any history.

E.A. Judge is Emeritus Professor of History at Macquarie University, Sydney. A Classics graduate from New Zealand and Cambridge, he was Sir James Knott Fellow in Ancient History at King’s College, Newcastle upon Tyne, before moving to Sydney in 1956. As editor and educationist, he has fostered the extensive study of Ancient History at both secondary and tertiary levels in New South Wales. For services to education, he has been appointed by the crown as a Member of the Order of Australia and elected as an honorary Fellow of the Australian Academy of the Humanities.

“If the title ‘The Failure of Augustus’ comes as a shock, that is an indication of how much we still have to learn from Edwin Judge—the scholar who got Augustus right.”
G.D. Rowe,
Department of Greek and Roman Studies, University of Victoria, Canada

“This provocative book challenges us to rethink what many people believe we know about Roman politics during the age of Augustus and beyond. It encourages us to abandon casual use of terms such as Republic and Empire, reign and succession. Alongside its fundamental reassessment of Augustus’ political aspirations and achievements, it does nothing less than stimulate reflection on how to write ancient history for modern audiences.”
Alison E. Cooley,
Department of Classics and Ancient History, University of Warwick, UK; Editor, Res gestae divi Augusti (2009)

“This is a volume of unparalleled riches on Augustus. Edwin Judge, one of the most meticulous of scholars and inspiring of teachers, has spent a lifetime investigating and teaching this subject. If you thought you knew the meaning of terms such as ‘res publica’ or ‘imperium’, you need to read this book.”
R.T. Ridley,
Emeritus Professor of History, University of Melbourne, Australia

"Writing history without the benefit of hindsight is hugely challenging now, and it was in antiquity too. The impact of the Emperor Augustus’ long life (63 BC to AD 14) on the future of the Roman world was so enormous that even at the time it was hard to think away the contingent and unexpected twists and turns which made up one of the more remarkable of political lives in history. But how much did Augustus plan? What was the actual political and social world in which he operated, as opposed to the one he is alleged to have created? In nearly thirty chapters, each one short, precise and a model of clarity, Edwin Judge, one of Australia’s greatest ancient historians, sets out to rethink the Augustan age. Rather than seeing constitutional change brought about by a determined autocrat, Judge argues that Augustus was frustrated by his failure to re-establish traditional competitive Roman politics. Emerging from the internecine strife of civil war, the young Octavian was clearly eager for power and determined to succeed. But what did success mean? In the past it was sometimes assumed that Augustus sought to ‘restore the Republic.’ Judge has always been wary of this as a modern reconstruction. Apart from the rarity of the term, we need to be careful about translations – when Augustus spoke about the Republic (res publica) he did so in ways we might more plausibly translate as country. The reference is in other words highly generic rather than specifically constitutional. Augustus adapted to circumstance, but he could not control the consequences of his actions. Insofar as Augustus ever had a plan (and Judge shows how hard Augustus worked to avoid being pinned down to a single strategy), it included personal safety and familial continuity within the old political games. It was others who increasingly refused to share the stage with Augustus. Few could manage and perhaps fewer relished the difficult task of competing with but never crossing Augustus. As he searched for the legitimacy which would leave him untouchable, he squeezed out the remaining force of law and the vitality of political competition. Using Augustus’ own words, and working from abundant citation of the texts, Judge arrives at a picture of an emperor caught within the paradox of wanting to avoid the fate of his adoptive father and others before him, who lost their lives through excessive power, but not willing to abandon his own safety. His success was in surviving; his failure was in never being able to be free of his own immense authority. In the end, perhaps against his own wishes, Augustus became a model of monarchy instead of a step backwards to Republican government. His successor Tiberius would struggle with precisely the same paradox. Unorthodox, vivid, deeply learned but often amusing, Judge’s lifelong engagement with and critique of Augustus is a monument of Antipodean scholarship."