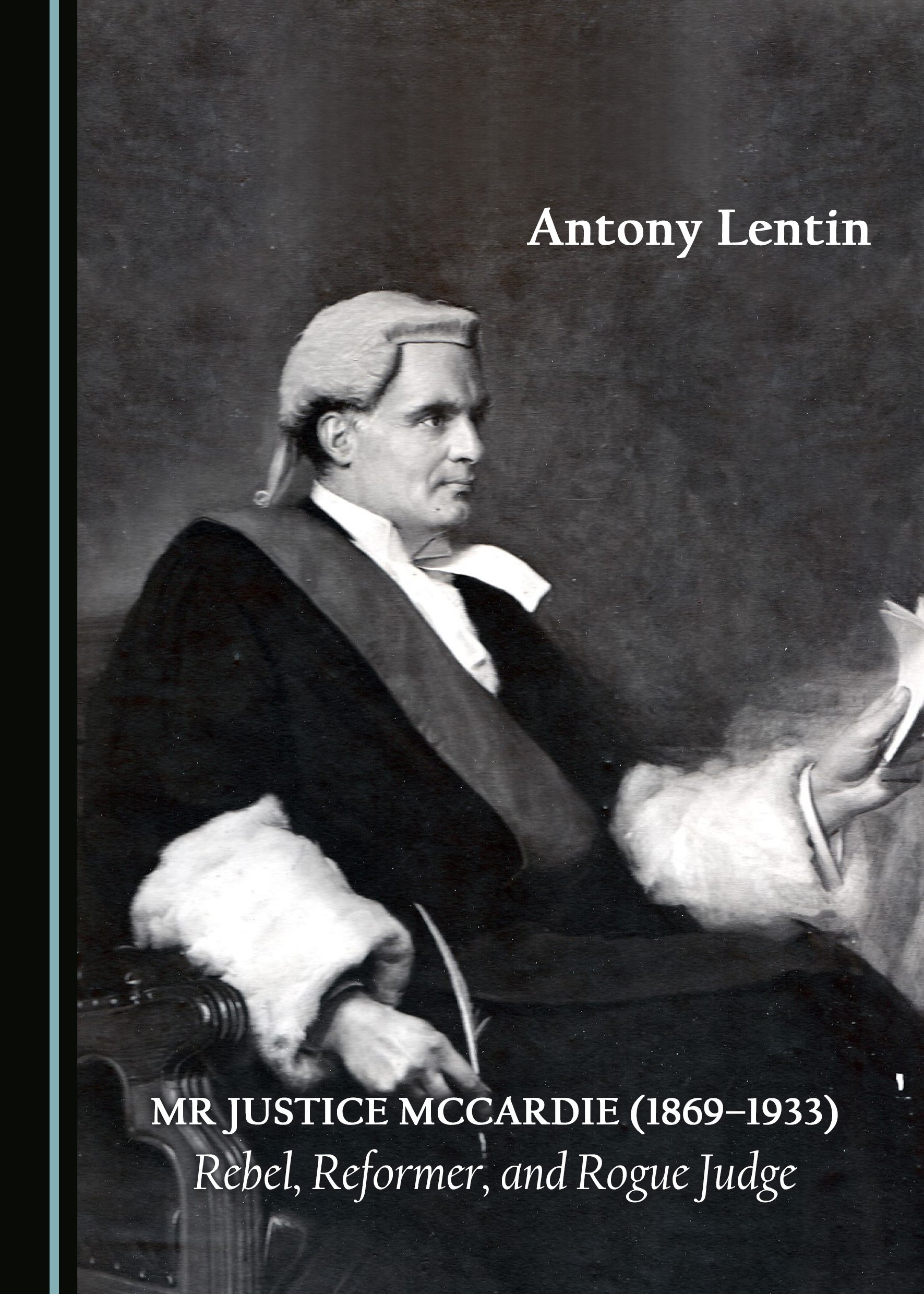 According to the Law Journal in 1932, ‘No present-day figure on the Bench is of greater interest than Mr Justice McCardie’. A High Court Judge from 1916 to 1933, no twentieth-century judge was more conspicuous or controversial. To his critics, he was a ‘rogue judge’ whose headline-hitting pronouncements often angered his fellow judges, called down the ire of the Churches, provoked calls in Parliament for his removal and earned a public rebuke from the Prime Minister. To his admirers, he was ‘a Crusader on the Bench’, a pioneer who denounced outdated laws, strove to make the law meet the needs of modern society and boldly championed women’s causes, birth control and abortion. The Law Quarterly Review described him as ‘one of the most interesting men in the history of the English Bench.’

Antony Lentin is a Senior Member of Wolfson College, Cambridge, a Fellow of the Royal Historical Society and a Barrister. Formerly a Professor of History and Law Tutor at the Open University, he is the author of The Last Political Law Lord: Lord Sumner (1869–1934) (2009) which forms a companion volume to this book. His other interests include the Paris Peace Conference of 1919, on which he has written Guilt at Versailles: Lloyd George and the Pre-History of Appeasement (1985), Lloyd George and the Lost Peace (2001), and General Smuts (2010). His most recent book is Banker, Traitor, Scapegoat, Spy? The Troublesome Case of Sir Edgar Speyer (2013). He has published widely on eighteenth-century Russia and has edited The Odes of Horace for Wordsworth Classics.

"[F]rom the pen of Antony Lentin, a historian who has written important books on the Treaty of Versailles and, more recently, biographies of the Law Lord, Lord Sumner, and of the important if mostly-forgotten Sir Edgar Speyer, comes this definitive and scholarly but most entertainingly readable biography of McCardie. [...] There are surprisingly few really good, scholarly, biographies of English judges and this is one of the very best. Lentin has read widely in and cites from an astonishing range of contemporary newspapers. He makes extensive and fascinating use not merely of the law reports but of a wide range of public and private papers, including McCardie's surviving papers. Two particular features of the book are Lentin's careful identification of how and when – too often, decades into the future – reforms for which McCardie had called were finally achieved – and, all too rare in even the best scholarly publishing today, a truly excellent analytical index. [...] [T]his is a book to be savoured by anyone with an interest in either the history of the English judiciary or the history of family law in the twentieth century. I cannot recommend it too highly."

"The book is written with verve and enthusiasm, and with exceedingly few errors.... While Lentin and the reviewer hold very different views on McCardie’s merits as a judge, and perhaps on what makes a good judge, Lentin argues his cause with a passion and skill of which his subject would have been proud."

"This is a gem of a book. Under 200 pages in length it is very fully and carefully researched and for the student, however amateur, of the development of English Jurisprudence during an era of massive social change following the close of the Victorian era, a cameo performance of profound insight and quality. For someone who has experienced the unique cloistered and sometimes claustrophobic ambience of the Law courts, Barristers chambers and the Temple it plunges you straight into the early twentieth century world of Bar and Bench with all its professional tittle-tattle and with which we are all still familiar! So much has changed but not, in fact, changed in its essence. Some knowledge of the English Law and legal system enables a greater level of enjoyment and satisfaction but because of the nature and character of this “one off” those without such a background would still find the life of this enigmatic judge fascinating and fully justifying of exploration. Anyone in the legal world who is motivated more by the pursuit of justice than slavish adherence to law naturally warms to him and his iconoclastic approach to his cases."

Sir Paul Coleridge Chairman of the Marriage Foundation, retired judge of the High Court of England and Wales

"In these post-Brexit vote days when the independence of the judiciary is a hot topic, Antony Lentin’s biography of one of the most controversial judges this country has ever seen is timely. Few have ever publicly expressed themselves with such personal conviction as did Mr Justice McCardie and few have engendered such divided emotions, veering from contempt to something approaching veneration. Lentin leans towards the latter, though like all good lawyers he is scrupulous in recognising the strengths of the other side’s argument and ultimately leaves it to the reader to decide which of the two camps to join."

"Perhaps the most surprising feature of this lucid and suspenseful biography is that its author – an authority on the lives of eminent British lawyers – comes down heavily in favour of this apparent monster. For Antony Lentin regards McCardie’s innumerable departures from legal tradition as unavoidable in the light of the “medieval” (a favourite weapon in McCardie’s judicial lexicon) state of the law at the time. [...] Yet one comes to the end of this remarkable book with a feeling of gratitude that “Mac” never remotely achieved the kind of power to which he so evidently aspired."

"This particular judicial biography grew out of an entry on Mr Justice McCardie which the author was asked to write for ‘The Oxford Dictionary of National Biography’ – and a startling journey it has obviously been. Lawyers, academics and general readers interested in all things judicial – and their effects on social change – will be especially fascinated. [...] For details read this book, which the author has copiously researched using many original sources. The result is an absorbing narrative which fills in any number of blanks in the story of Mr Justice McCardie and which therefore makes an important contribution to English legal history."

"Antony Lentin’s life of Henry Alfred McCardie, published in the centenary year of his appointment to the High Court Bench, offers a fascinating portrait of a judicial figure whose reforming judgments have stood the test of time rather better than some of the public pronouncements that brought him fame and notoriety in his own day."

"This well-researched study of an interesting character (and the not-too-distant legal past) ... offers fascinating insights."

"The eccentric judge – reformer, feminist and gambler – gets a sensitive hearing in Anthony Lentin’s biography."

"This excellent biography by Antony Lentin takes a detached and fascinating look at a very controversial figure. Like the great Tom Denning, he was described as a living legend and crusader, but also as a judicial infidel and a rogue judge running amock. [...] Lentin has combined deep scholarship with vivid imagery, creating a fitting tribute to an extraordinary and populist figure, whose personality and achievements deserve to be remembered. I strongly recommended this striking portrait."

"Antony Lentin provides a vivid narrative on a rather eccentric and avant-garde judge, whose name and reputation has largely faded away from memory. The book is divided into seven substantive chapters that chronicle the life and times of McCardie. Lentin has researched widely and draws upon newspaper articles, case law, statute, private letters, journal articles and books. The biography is full of black and white photos and fascinating anecdotes that flow naturally in chronological order. It is written descriptively with constant sonorous diction, rather than being filled with trenchant legal analysis. [...] Lentin's biography is a welcome addition to the paucity of scholarship on McCardie. The book provides a good overview of his judicial career and it is suitable for those with a general interest in legal history."

'This book is an excellent example of the well-known adage that history is best studied through biography. The historical emphasis of the book is twofold: primarily it sheds some interesting light on the turbulent public life of Henry Albert McCardie, a controversial and, perhaps, too clever and over proud High Court judge in the interwar years. The subplot tells us about the complications of his private life, revealing some fascinating aspects of a bygone age of English social history. [...] This book is well written, highly readable and thoroughly researched. One suspects that McCardie would have been better placed as a politician and pamphleteer rather than a High Court judge but that was not to be. McCardie’s story has now been told. Unlike most judges who, we are told, “languish unmourned, consigned to oblivion”, this particular judge had a bard to tell his tale.'
LORD GRABINER Q.C., CLARE COLLEGE, Cambridge Law Journal, 77(3), November 2018, pp. 636–661

'This book will be of interest to anyone working on practices of adjudication in the early twentieth century; although it is hardly an account of a standard, average judge. Anyone who shares McCardie's realist sympathies will, perhaps, doubt whether such a creature can ever really exist.'
KEVIN CROSBY, Newcastle University, History Volume 103, Issue 355 2018