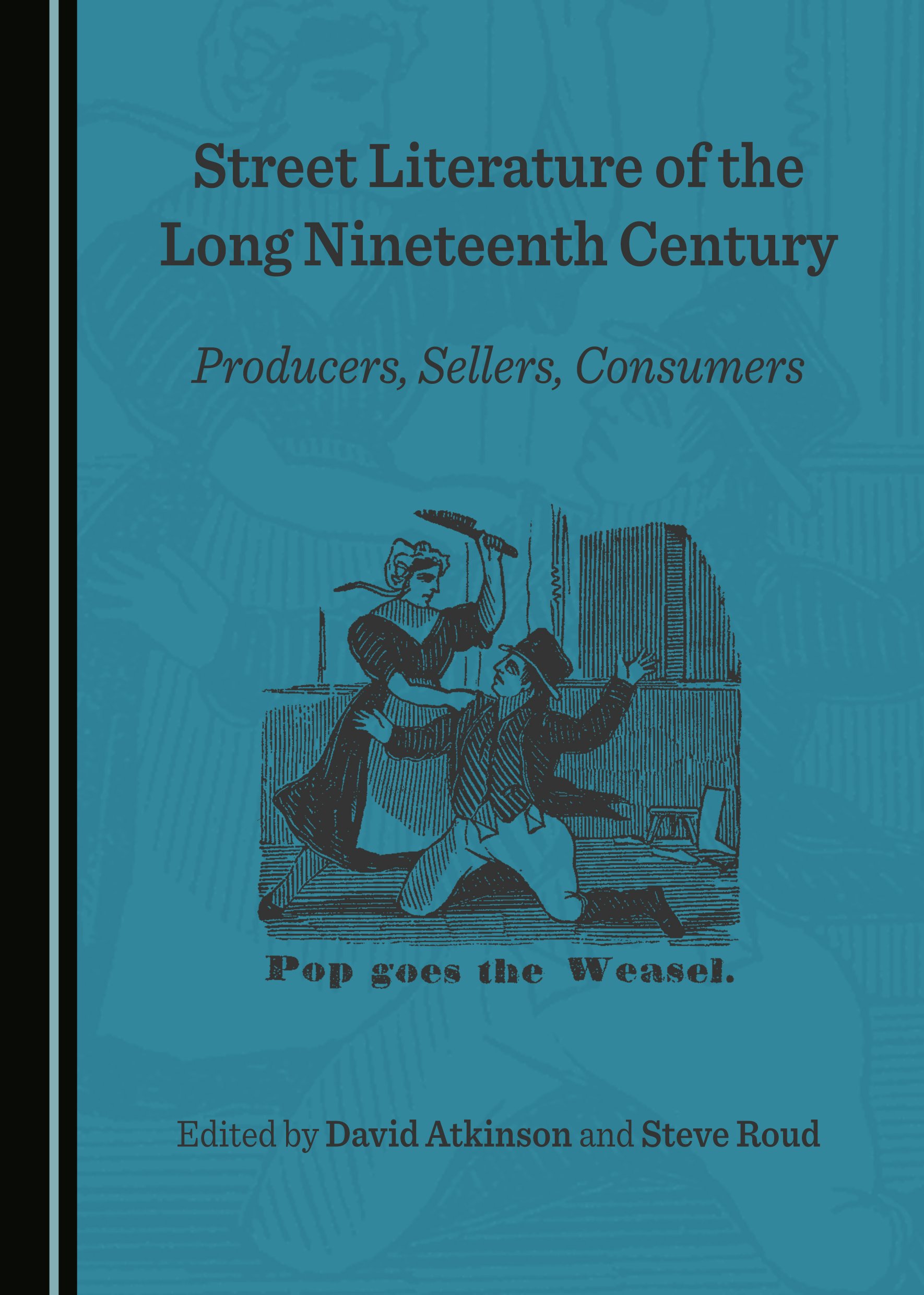 For centuries, street literature was the main cheap reading material of the working classes: broadsides, chapbooks, songsters, prints, engravings, and other forms of print produced specifically to suit their taste and cheap enough for even the poor to buy.

Starting in the sixteenth century, but at its chaotic and flamboyant peak in the nineteenth, street literature was on sale everywhere – in urban streets and alleyways, at country fairs and markets, at major sporting events and holiday gatherings, and under the gallows at public executions. For this very reason, it was often despised and denigrated by the educated classes, but remained enduringly popular with the ordinary people.

Anything and everything was grist to the printers’ mill, if it would sell. A penny could buy you a celebrity scandal, a report of a gruesome murder, the last dying speech of a condemned criminal, wonder tales, riddles and conundrums, a moral tale of religious danger and redemption, a comic tale of drunken husbands and shrewish wives, a temperance tract or an ode to beer, a satire on dandies, an alphabet or “reed-a-ma-daisy” (reading made easy) to teach your children, an illustrated chapbook of nursery rhymes, or the adventures of Robin Hood and Jack the Giant Killer.

Street literature long held its own by catering directly for the ordinary people, at a price they could afford, but, by the end of the Victorian era, it was in terminal decline and was rapidly being replaced by a host of new printed materials in the shape of cheap newspapers and magazines, penny dreadful novels, music hall songbooks, and so on, all aimed squarely at the burgeoning mass market.

Fascinating today for the unique light it shines on the lives of the ordinary people of the age, street literature has long been neglected as a historical resource, and this collection of essays is the first general book on the trade for over forty years.

David Atkinson is the author of The English Traditional Ballad and The Anglo-Scottish Ballad and its Imaginary Contexts, and co-editor of Folk Song: Tradition, Revival, and Re-creation and (with Steve Roud) Street Ballads in Nineteenth-Century Britain, Ireland, and North America. He is the editor of Folk Music Journal and Executive Secretary of the Kommission für Volksdichtung (Ballad Commission).

Steve Roud is a retired Local Studies librarian and is now a freelance writer and researcher specializing in the history of traditional song, folklore, and street literature. He is the compiler of the Folk Song Index, Broadside Index, and other ongoing online resources. His book publications include The Penguin Guide to the Superstitions of Britain and Ireland, The English Year, London Lore, and The Lore of the Playground. He is co-editor of The New Penguin Book of English Folk Songs, A Dictionary of English Folklore, and (with David Atkinson) Street Ballads in Nineteenth-Century Britain, Ireland, and North America.

"Academics, irrespective of discipline, will find their knowledge enriched by reading any given chapter: though my own research, for example, overlaps significantly with both Corfe’s and Gammon’s excellent contributions, each uncovers sources previously unknown to me.... There is a fine line between “exhaustive” and “exhausting,” and ... this volume keeps on the right side of it."

"The editors are to be applauded for bringing together accounts of so many diverse aspects of the production, distribution and reception of street literature, for their chronological and geographical coverage, for attention to localised developments and individuals in the trade, and for the high level of scholarship that has gone into its making. It also profits from an extensive, up-to-date bibliography."

"The editors of this important collection of essays are both well established in the field of street literature and folklore history. They have brought together an impres sive range of contributors, all of whom bring their own insights into this rather amorphous field of study. At one time, street literature would hardly have been regarded as a field worthy of scholarly attention. Most literary scholars, bibliographers, and librarians regarded chapbooks, ballads, song-sheets, and broadsides with disdain. in many libraries (with some notable exceptions) such apparently ephemeral material is not even catalogued, being kept in boxes of miscellaneous items or in bound volumes of pamphlets and small booklets. This is changing, and scholars have in recent decades begun to take serious notice of street literature, approaching it from various angles: book history, cultural history, and literary studies, as well as folklore and, where appropriate, traditional music. This variety of approaches is entirely appropriate for such a diverse range of publications— ‘street literature’ being a handy catch-all frame of reference—and is reflected in this collec tion of essays."

"Both wide ranging and intensive, Street Literature of the Long Nineteenth Century: Producers, Sellers, Consumers, edited by David Atkinson and Steve Roud, is a compendious account of cheap printed literature as sold and performed in the streets, markets and fairgrounds across nineteenth-century Britain. The book is a treasure trove of sources and commentary for the specialist, yet has so much to offer other readers on many aspects of common life… Street Literature of the Long Nineteenth Century is a rich source book and annotated research aid with content and context analysis and historical commentary. It will be invaluable to students in its particular field but should also have a wider attraction as a spirited and revealing account of a major mode of popular culture in the swarming Victorian streetscape."