Daughters of the Nile: Egyptian Women Changing Their World 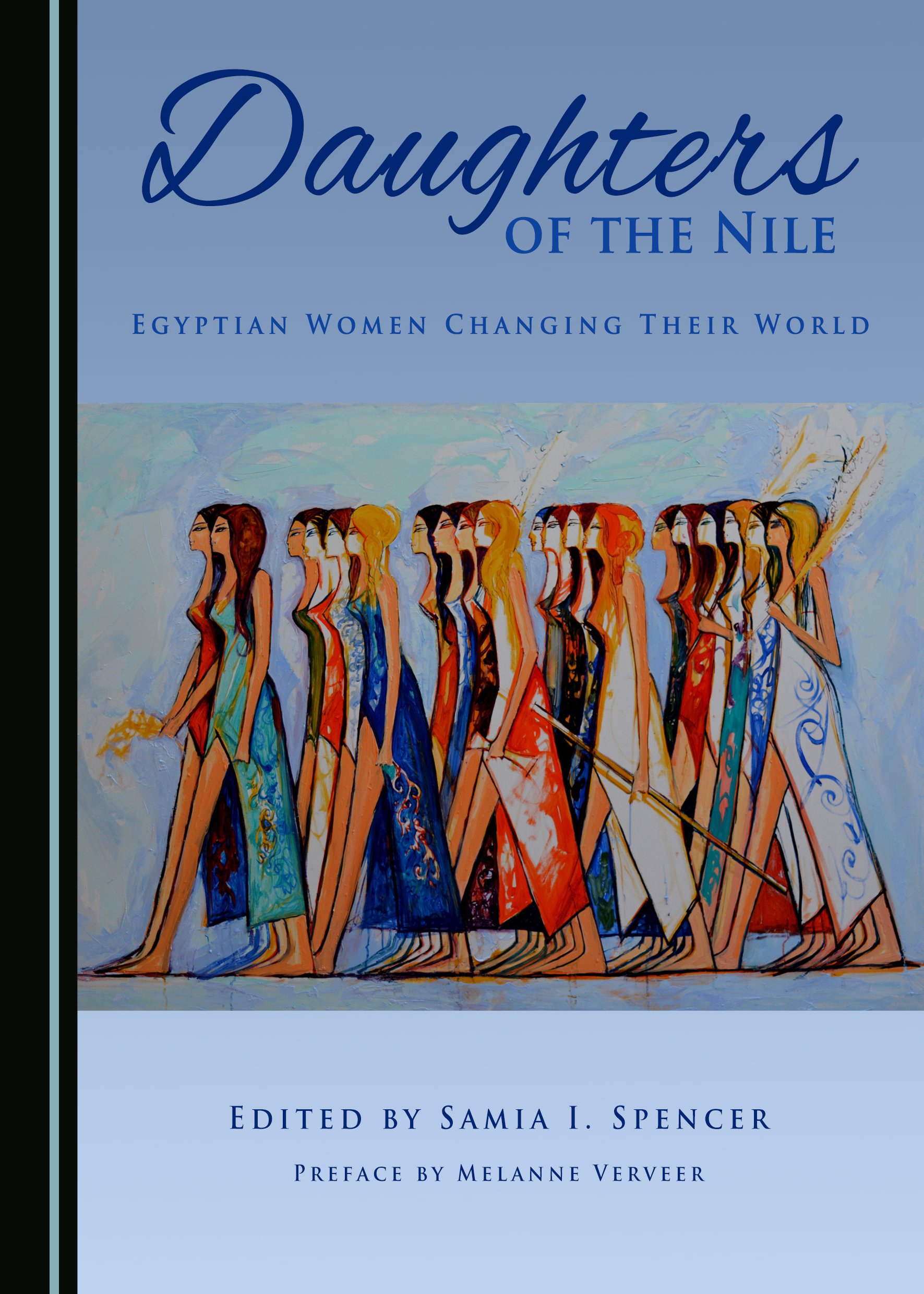 The history of ancient Egypt is filled with fascinating queens and goddesses portrayed side by side with their male counterparts as equal partners, each playing a different and distinct role in society. Anyone interested in their identity and achievements can go to popular or academic sources, and find ample material on the subject. How about their descendants: contemporary Egyptian women? Who are they? What do we know about them, or about their accomplishments? Only scarce and limited information is available.

In recent years, however, since the ill-named “Arab Spring,” images of Egyptian women have flooded TV screens and print media showing them among crowds of shouting demonstrators. Reports have focused on their trials and tribulations, and their regressive condition. This book seeks to highlight Egyptian women that the media have overlooked and ignored. It focuses on a sample of 38 pioneers, ground-breakers, and achievers in nearly all professions: academe, the arts, banking, development, diplomacy, economics, engineering, entrepreneurship, finance, government, medicine, public relations, science and technology, social services, sports, international relations, and international organizations. Their successes in Egypt and elsewhere have been recognized and honored by some of the highest national and international institutions and governments. Forgotten or unknown habits, practices, and historical events occurring in the twentieth century, both in Egypt and other parts of the globe, are also discussed in these stories.

The objective of the book is three-pronged. It breaks the monolithic and unflattering stereotype of contemporary Egyptian women as victims, uneducated and uncivilized, dominated by men. The second is to make the world aware of modern Egyptian champions who are improving the quality of life in the societies and broader environments in which they live and work. The third purpose is to provide positive role models for new generations of women in Egypt and beyond, to inspire them to set their goals very high despite the obstacles they may encounter, and show them that the sky is not the limit.

After a brief career in her native Alexandria, Dr Samia Spencer spent most of her professional life as Professor of French at Auburn University, in Alabama. Her multidisciplinary research and extensive publications have focused on the French Enlightenment, French women of the eighteenth century, and women and politics in France and Quebec. She has received a number of awards, including being named as Officier dans l’Ordre des Palmes Académiques, and an appointment as Honorary Consul of France in Alabama. In recognition of her efforts on behalf of the culture of Quebec, she was inducted into the exclusive Ordre des Francophones d’Amérique.

"The vividly narrated chapters, all in the first-person, hold many memorable phrases and much candour. The story in each becomes not only that of the individual woman narrating her experience but also the history of a society and a country. Through the eyes and documents of these women, we see pressing Egyptian issues coming to the fore. [...] For those interested in Egypt or women’s progress, or those who enjoy engaging and well-written autobiography, this book is a must."

"This book is long overdue. It is high time that modern Egyptian women stand side-by-side with their brilliant ancestors."

"This outstanding book is a must-read. Many influential Egyptians share personal, telling stories about their achievements, shattering stale myths about Egyptian women. In their marvelously detailed narratives, they strive to make the world a better place, resulting in a much-needed Egyptian humanity. Their stories warmed my heart; so much so that I want to meet and thank each and every one of them for their passion, wit and courage."

"Working on Rule of Law programs, in Egypt and Jordan, with judges from the region, I observed first-hand the valuable contribution women make to the discussion of today’s important issues. So for me, the professional achievements chronicled in this book, although remarkable are not surprising. Narratives that mothers and daughters can read together, and that all of us can admire. What fine examples the authors set for women everywhere!"
Justice Joseph P. Nadeau
New Hampshire Supreme Court (Retired)

"Stereotypes are unidimensional stories about a category of other, largely devoid of fact. The strongest antidote to stereotyping are stories that offer counter-narratives about real people living rich, full lives of substance. This book is a wonderful example of just such counter-narratives."

"This book is a stark and important reminder of the power of women, their accomplishments against many odds, and their resilience to overcome, lead, and be a force to reckon with in their country and beyond. Egyptian women have a strong and rich tradition of leadership, and this is yet another example of their strength—an excellent and inspiring read."