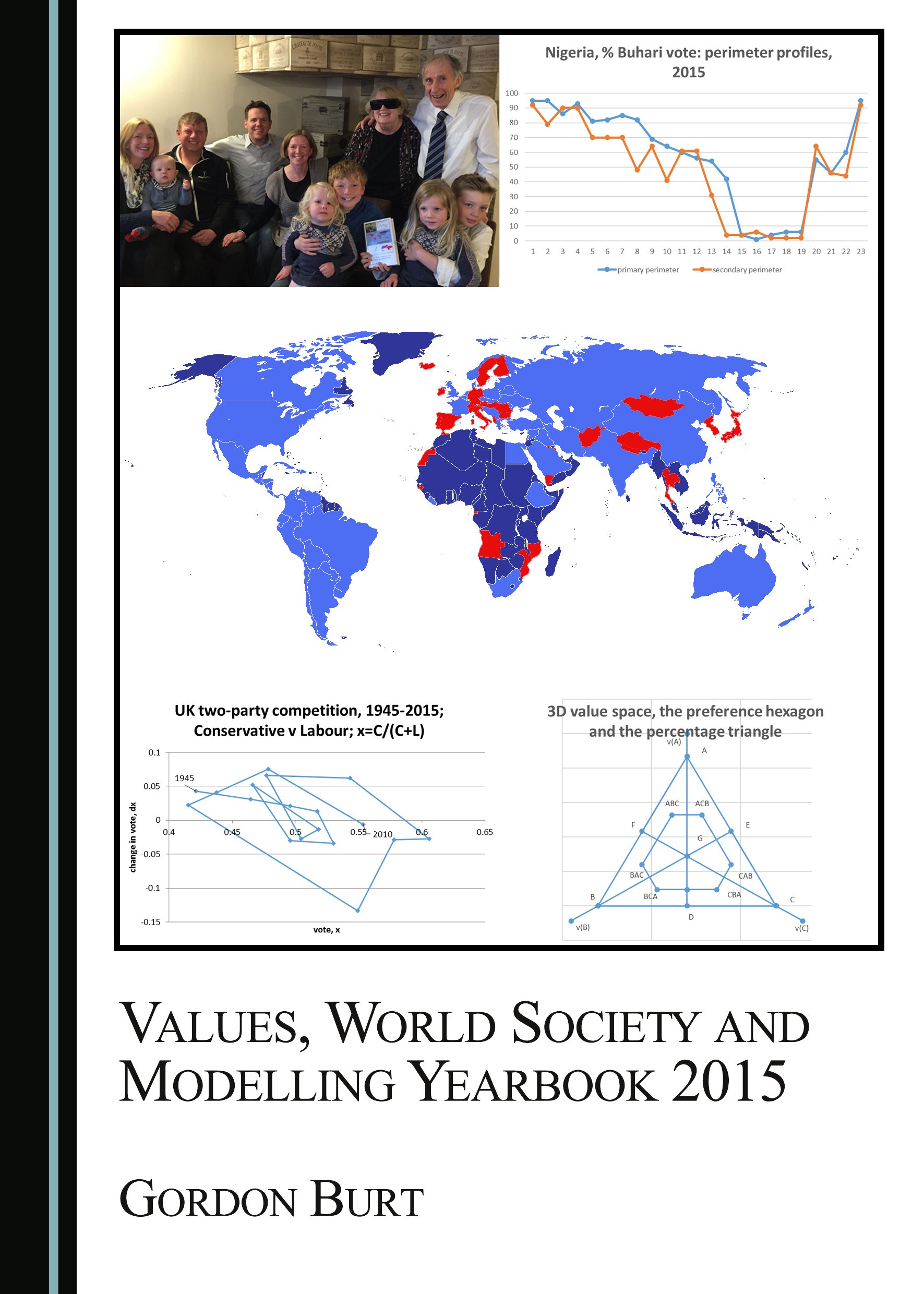 The Values, World Society and Modelling Yearbook 2015, like the 2014 Yearbook, analyses contemporary world events with special attention to values, drawing on foundational ideas in a variety of academic disciplines. World society in 2015 exhibited economic, political and cultural tensions: growth and austerity; the Greek bailout referendum; the Paris attacks on the Charlie Hebdo cartoonists; the Christian south and Muslim north in the Nigerian elections; and religion and secularism in Ireland’s referendum on same-sex marriage. Demographics, austerity, migration and nationalism were all issues in the UK general election. There were debates about immigration into Europe and debates about Western military intervention. There were debates about the Enlightenment surrounding the bicentenary of the Battle of Waterloo. The year 2015 was the seventieth anniversary of the establishment of the United Nations, and the centenary of the birth of one of those who attended the San Francisco conference in 1945, namely John Burton, founder of the Conflict Research Society. Chapter Two of the Yearbook is “The John Burton Memorial Lecture 2015”, by Kevin Clements. Other guest contributors are Feargal Cochrane, Hugh Miall, Dennis Sandole and Rania Dimitraki. The modelling aspect of the Yearbook is strongly structured around the notions of space, time and value. Six of the chapters are about space – physical space, geographical space, psychological space, social space, political space and value space. Four of the chapters are about time: time series for human development and population; revisiting the Pinker debate about a decline in violence; physical and structural violence; the 1945–2015 UK decline in two-party and three-party politics; the flight from the centre and the rise of UKIP and Jeremy Corbyn. The chapter “Life is a Journey” discusses values in a qualitative way, then models of values are developed for particular topics and finally a systematic account is given of value spaces.

Gordon Burt was Chair of the Conflict Research Society from 2008 to 2015, and took the lead role in organising the Society’s annual conference from 2007 to 2014. He is the author of the previous yearbook, Values, World Society and Modelling Yearbook 2014 (2016), and of Conflict, Complexity and Mathematical Social Science (2010), and the editor of Alternative Defence Policy (1988). He has been an active researcher in peace and conflict studies, politics and international relations for over thirty years.

“This volume follows in the steps of Gordon Burt’s Yearbook, 2014. Like the earlier book, it is a remarkable compendium of reflections, reportage, and critical analysis of the year’s events refracted through the keen intelligence of Kevin Clements, Dennis Sandole, Hugh Miall, Feargal Cochrane and, not the least, Gordon Burt himself. If anything, this volume is even more successful than last year’s at bringing a humanistic and scientific sensibility together, as in Burt’s moving essay “Life as a Journey.” Reading this book is like spending an evening or two in the company of a multifarious, wide-ranging, and original mind, as likely to enlighten you through the mathematical modelling of social complexity and political space, as the poetry of Burns, Stevenson and Cavafy.”
Kevin Avruch
School for Conflict Analysis and Resolution, George Mason University, USA

“Burt’s 2015 Yearbook is a joy. It is alive with insight and written with style and charm. Reading the chapters—which one can do in almost any order, as is often the case with “yearbooks”—is enlightening. What should be emphasized, I think, is that the volume is not only extremely erudite, but fun. From Kevin Clements’ relevant and careful Burton Memorial Lecture through Burt’s consideration of the 2015 UK elections, there is much here to convince us that the world is a society, its parts connected in interesting and surprising ways.”
Glenn Palmer
Executive Director, Peace Science Society (International), Penn State University, USA