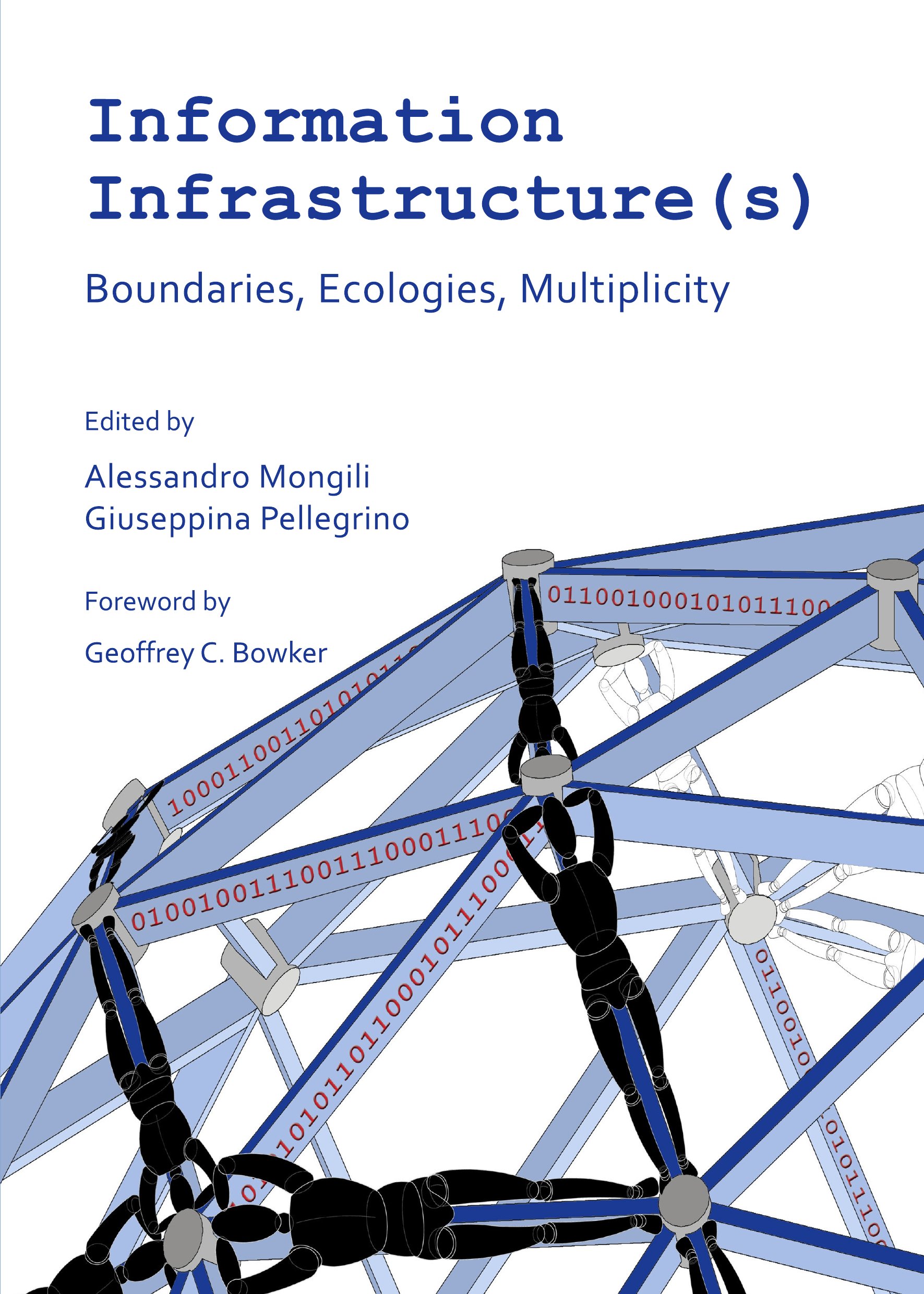 This book marks an important contribution to the fascinating debate on the role that information infrastructures and boundary objects play in contemporary life, bringing to the fore the concern of how cooperation across different groups is enabled, but also constrained, by the material and immaterial objects connecting them. As such, the book itself is situated at the crossroads of various paths and genealogies, all focusing on the problem of the intersection between different levels of scale throughout devices, networks, and society.

Information infrastructures allow, facilitate, mediate, saturate and influence people’s material and immaterial surroundings. They are often shaped and intertwined with networks of relations and distributed agency, sometimes enabling the existence of such networks, and being, in turn, produced by them. Such infrastructures are not static and immobile in time and space: rather, they require maintenance and repair, which becomes an important aspect of their use. They also define and cross more or less visible boundaries, shape and act as ecologies, and constitute themselves as multiple entities.

The various chapters of this edited book question the role of information infrastructures in various settings from both a theoretical and an empirical viewpoint, reflecting the contributors’ interests in science and technology studies, organization studies, and information science, as well as mobilities and media studies.

Alessandro Mongili is a Professor of Sociology at the University of Padua, Italy. He is also affiliated with the Padova Science, Technology and Innovation Studies Center (PaSTIS), and is the author of La chute de l’U.R.S.S. et la recherche scientifique (L’Harmattan, 1998) and Tecnologia e società (Carocci, 2007). His current research interests and publications focus on design and development practices in computing, and on the relevance of computing in the standardization of minority languages.

Giuseppina Pellegrino is a Lecturer in Sociology of Communication at the University of Calabria, Italy. Her core research interests intersect STS and mobilities, as well as media, gender and organization studies. A Visiting Fellow at the University of Edinburgh, Lancaster University, IAS-STS (Graz) and TU Darmstadt, she was appointed a Fulbright Distinguished Lecturer in Italian Studies at the University of Pittsburgh in 2013. Her publications include the edited book The Politics of Proximity: Mobility and Immobility in Practice (Ashgate, 2011).

"[T]his edited book is a great contribution to the study of information infrastructures, and shows the variety and vitality of this field of inquiry. The reader will appreciate the feeling of intellectual adventure that goes through this book, with the touching foreword by Geof Bowker or the introduction as an homage to the contribution of Leigh Star. Most importantly for the field, it shows the vitality of scholarship that does not come from an English speaking country, reflecting current efforts in STS to connect with larger researchers’ communities."

"Information Infrastructure(s) constitutes a dense and stimulating reading for scholars interested in extending the ecological infrastructure paradigm to emerging fields of research that involve informational dynamics, besides digital media. It also provides a consistent compendium of STS infrastructure studies that graduate students might find thought-provoking [...] [T]he books [sic] positions itself as an original attempt to open the field of STS-informed infrastructure studies to emerging disciplines and concerns. As such, it is worth reading not only by an STS-savvy readership, but also by scholars interested in the informational dynamics taking place in biotechnology, medicine and health care, organisational studies, innovation policy, design, user and mobility studies."

"Many chapters show highly relevant case studies that provide an insight in how to apply or "do" infrastructure research. The many chapters vary in terms of level of analysis and type and size of case, presenting a colourful spectrum of different types of STS infrastrucutre work. [...] The book is accessible and it contributes to an empirical understanding and grounding of the notions of IIs and BOs. As such, the volume sets and fills out the agenda for this important research topic and expands it well beyond a STS scholarship only."

"[T]he volume presents a pictures of the current debate on information infrastructures. The choice to focus on empirically-grounded analyses and the variety of cases handled offer the readers the chance to see the analytical categories “in action”. [...] The reading of the book as a whole ... demonstrates the close connection of the different planes and the fecundity of an ecological approach to the analysis."