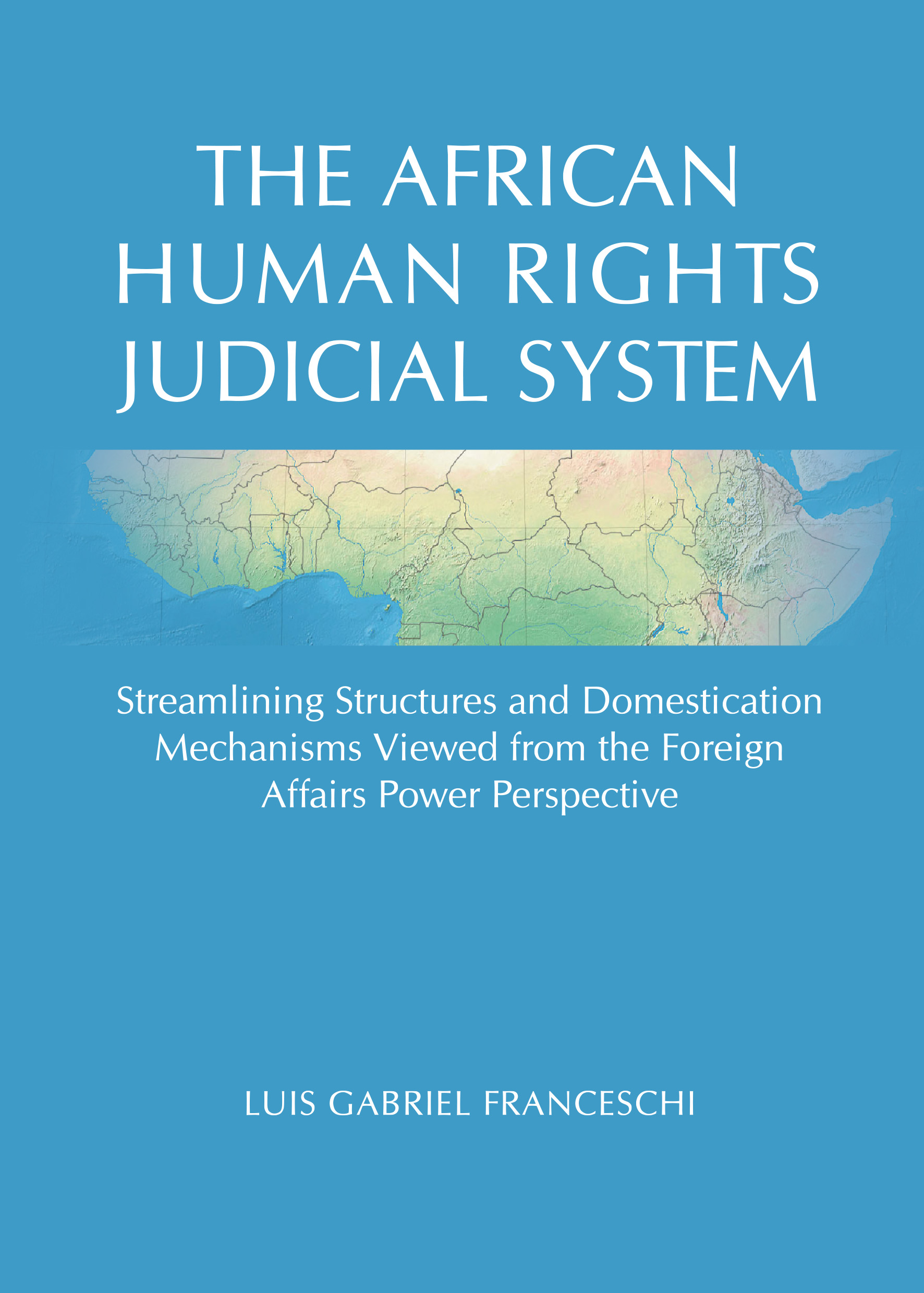 This book deals with two interconnected yet often forgotten realities of the constitutional order in Africa: first, the ‘foreign affairs power’ that gives the specific organs of the State the capacity to create and empower universal, regional and sub-regional governance and judicial structures. Secondly, the ‘international judicial function in Africa’, with a specific focus on the African Court on Human and Peoples’ Rights and the upcoming merger with the African Court of Justice to form one court: The African Court of Justice and Human and Peoples’ Rights.

Dr Luis Gabriel Franceschi is the Dean of Strathmore Law School. He holds a Bachelor of Laws from UCAB, a Master of Laws from the University of Nairobi, and a Doctorate of Laws from the University of Navarra. Dr Franceschi has consulted for the African Court of Human and People’s Rights, the Ministry of Justice and the Office of the President in Kenya, the National Economic and Social Council, the Constitution Implementation Commission of Kenya, the Council of Legal Education (CLE) and the Commission for University Education (CUE). He has also been a member of the Governing Council of UNEP and the legal adviser of the President of the Council, where he co-drafted the UN Nairobi Declaration. He is a member of the Pan-African Lawyers Union. He lives and works in Kenya.

“The author has set the perennially relevant subject of human rights in the international context, while discerningly illuminating its anchorage-mechanisms in the national constitutional system and, in particular, in the adjudicatory scheme within the judicial organ. In this remarkably focused work, Dean Franceschi has placed before the readership fresh lines of legal scholarship, laying bare much information and learning that had not been accessible earlier.”
- Justice J. B. Ojwang, Ph.D. (Cantab); CBS; Justice of the Supreme Court of Kenya

“Starting with the obligation of the international community to protect human rights, Luis Franceschi pulls together various strands of, and interaction between, constitutional and international law to explore the important question of the respect for, and the enforcement of, human rights. Of particular interest is his analysis of the history and jurisdiction of African commissions and courts to supplement the national protection of human rights.”
—Professor Yash Pal Ghai, CBE, Fellow of the British Academy

“Dr Luis Gabriel Franceschi’s study is beyond any doubt of great added value to the abundant literature on human rights in Africa. It is a comprehensive analysis of the whole African institutional framework aimed at the protection of human rights in the Continent. It embraces not only the continental mechanisms established under the African Charter on Human and Peoples’ Rights, i.e. the Commission and the Court, but also the sub-continental regional judicial bodies established within the framework of the Regional Economic Communities. Dr Franceschi’s study also captures the ongoing metamorphosis of the African Court on Human and Peoples’ Rights, which is on the verge of being entrusted with four new kinds of jurisdiction: general legal issues, African Union constitutional issues, staff appeals, and criminal matters. This expansion of the jurisdiction of the African Court raises crucial questions to which Dr Franceschi has brought clear responses.

The author also examines the major challenges faced by the African human rights system, including, inter alia, the domestication and consideration of international law by national judges, as well as the search for appropriate and effective ways to enforce the decisions of the African Court at the municipal level, without any interference from the political organs of the States involved. These are some of the reasons why I strongly recommend the reading of this book to anyone interested in the past, the present and the future of the African Human Rights System.”
—Justice Dr Fatsah Ouguergouz, Judge and former Vice-President of the African Courton Human and Peoples’ Rights