Ages of Heroes, Eras of Men: Superheroes and the American Experience 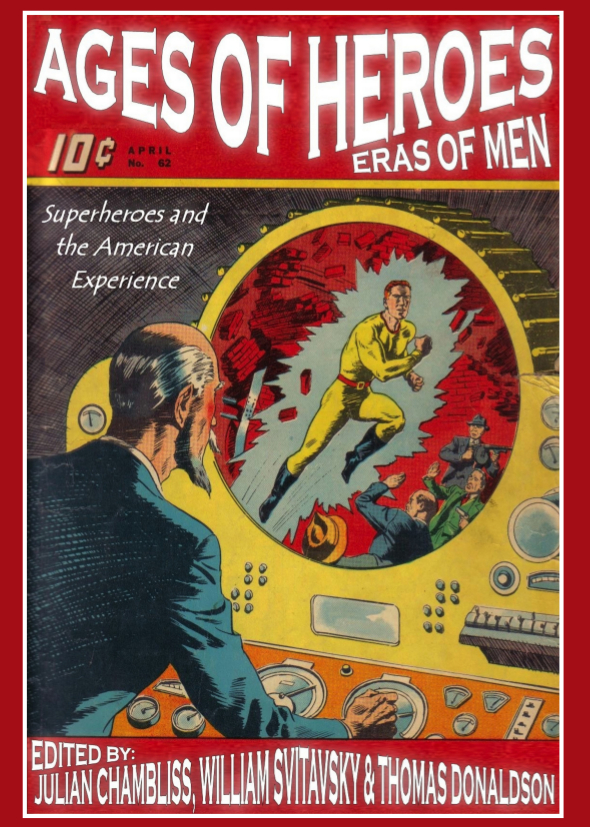 Ages of Heroes, Eras of Men explores the changing depiction of superheroes from the comic books of the 1930s to the cinematic present. In this anthology, scholars from a variety of disciplines – including history, cultural studies, Latin American studies, film studies, and English – examine the superhero’s cultural history in North America with attention to particular stories and to the historical contexts in which those narratives appeared. Enduring comic book characters from DC and Marvel Comics including Superman, Iron Man, Batman, Wonder Woman and the Avengers are examined, along with lesser-known Canadian, Latino, and African-American superheroes. With a sweep of characters ranging from the Pulp Era to recent cinematic adaptations, and employing a variety of analytical frameworks, this collection offers new insights for scholars, students, and fans of the superhero genre.

The anthology comprises three chronologically-divided sections corresponding to the well-established distinction in comics of the Golden Age, Silver Age, and Modern Age. Section I, “Defending the American Way,” connects the emergence of the new superhero genre to the social, political, and economic issues of the Progressive Era, the Great Depression, and World War II. Section II, “Crisis of Consensus,” examines the rebirth and evolution of the superhero comic in the context of Cold War anxiety. Section III, “The Modern Age,” explores the ongoing development of the superhero in the post-Cold War world, with a narrowed but more sophisticated comic book readership and ultimately an expanded new audience in other media.

Julian C. Chambliss is Associate Professor of History at Rollins College in Winter Park, Florida. His teaching and research focus on urban development and culture. His academic writing has appeared in Critical Survey of Graphic Novels: Heroes and Superheroes, Studies in American Culture, The Florida Historical Quarterly, Pennsylvania History: A Journal of Mid-Atlantic Studies, Georgia Historical Quarterly, and Journal of Urban History. In addition, he has published opinion and commentary in PopMatters, The Los Angeles Times, The Christian Science Monitor, and The Orlando Sentinel.

William L. Svitavsky is an Associate Professor and Emerging Services Librarian at the Olin Library at Rollins College in Winter Park, Florida. His research interests include American comic book history, the work of M.P. Shiel, and geek culture; his academic writing has appeared in Science Fiction Studies, Studies in American Culture, and The Bulletin of Bibliography.

Thomas C. Donaldson is Assistant Professor of History at Edison State College in Punta Gorda, Florida. His teaching and research focuses on the impact of gender politics on American popular culture. His current research is titled “Truth, Justice, and the Status Quo: Antifeminism, Superheroes, and the American Way of Gender, 1955-1990,” and his article “Inflexible Girls of Steel: Subverting Second Wave Feminism in the Extended Superman Franchise” was recently published in The Ages of Superman: Essays on the Man of Steel in Changing Times.

“While writing in an informative, well-articulated prose accessible to expert and non-expert readers alike, the sheer breadth and scope of their scholarship are impressive. Taken as a whole, this collection clearly communicates the complexity of the superhero genre in terms of gender, race, social class, and historical context. […] The misperception that the superhero genre is simplistic drivel for adolescent boys is thoroughly put to shame in this highly engaging, well-balanced collection of essays. Ages of Heroes, Eras of Men is surely destined to become an essential addition to the growing corpus of superhero studies”
–Kirsten Møllegaard, Associate Professor, University of Hawai’i at Hilo; The Journal of American Culture, 37:4