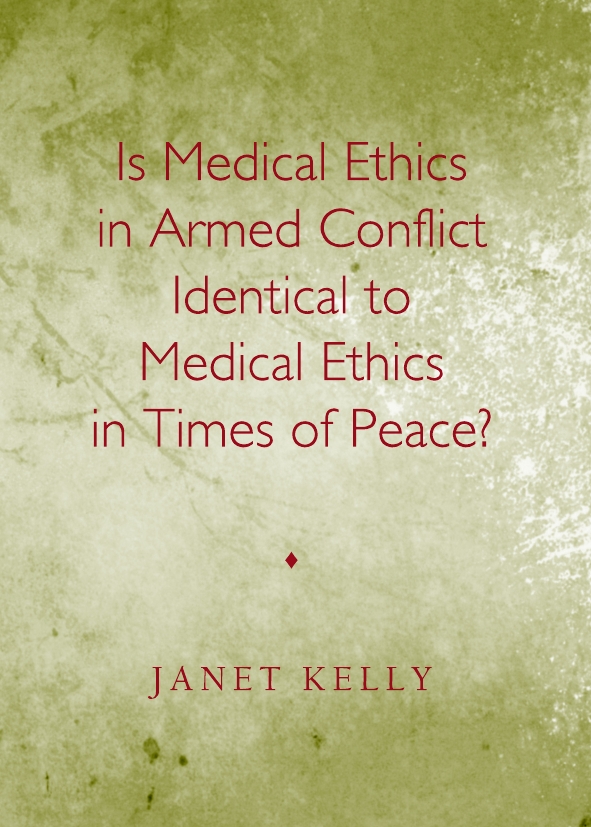 This book challenges the World Medical Association’s (WMA) International Code of Ethics statement in 2004, which declared that ‘medical ethics in armed conflict is identical to medical ethics in times of peace’. This is achieved by examining the professional, ethical, and legal conflicts in British Military healthcare practice that occur in three distinct military environments. These are (i) the battlefield, (ii) the operational environment and (iii) the non-operational environment. As this conflict is exacerbated by the need to achieve Operational Effectiveness, this book also explores the dual loyalty conflict that Military Health Care Professionals (MHCPs) encounter between following military orders and professional codes of practice.

The method used to challenge the WMA’s statement and explore these conflicts is the use of real-life problem-solving vignettes, which mirror actual ethical and professional conflicts and dilemmas that may occur in the three environments. The areas of law analysed similarly reflect the difficulties that MHCPs face when caring for the sick and wounded in violent locations when under attack. In particular, the book questions whether it is right for a MHCP to owe their patients a duty of care in hostile environments. This leads on to questioning if any MHCP could be protected by combat immunity where no duty of care is owed to fellow soldiers in the battlefield.

The book also questions whether the standard of care should be variable in hostile environments. It also explores the dual loyalty conflict of a wounded senior officer refusing treatment from a junior officer. In addition, it examines the difficulties of a doctor maintaining patient confidentiality when a soldier refuses treatment for a psychological injury but wishes to redeploy to the battlefield.

The book successfully challenges the WMA’s statement. It also concludes by suggesting that neither a military-focused approach nor a professional healthcare-focused approach towards military healthcare is the best way to solve the dual loyalty conflict.

Janet Kelly, originally from Middlesbrough, is a nurse and midwife who trained at Stockton-on-Tees and Leeds in 1985 and 1990 respectively. In 1992, she joined Queen Alexandra’s Royal Army Nursing Corps, serving in Germany, Gibraltar, and England as a midwife and as a nurse on operational tours in Bosnia and Kosovo. She left the army in 2000, joined her local Territorial Army Unit, and commenced fulltime education, achieving degrees in both management and law. After a short while working as a Community Midwife in Middlesbrough, she took up a post as a Lecturer in Midwifery and Women’s Health and four years ago as a Lecturer in Medical Law at the University of Hull. More recently, she successfully completed her PhD in Professional, Ethical, and Legal Conflicts in British Military Healthcare Practice.