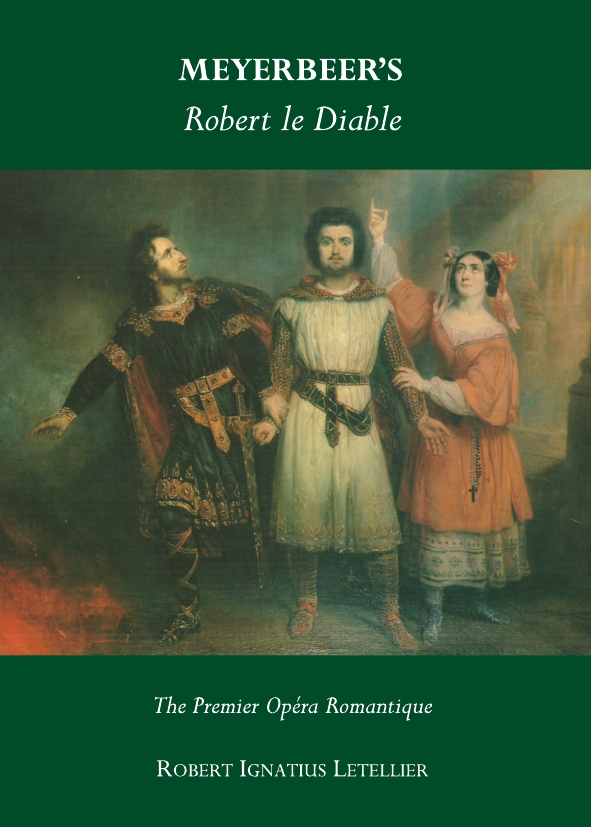 Robert le Diable by Giacomo Meyerbeer is regarded as a musical milestone, a definitive statement in the 19th-century development of French grand opéra from the tragédie lyrique of Lully, Rameau, Gluck and Spontini. The libretto by Eugène Scribe and Germain Delavigne was derived from the medieval legend of “Robert the Devil”. First performed on 21 November 1831 at the Paris Opéra, the work brought Meyerbeer international celebrity.

Robert le Diable remains a legend in the annals of opera. The fascinating story reveals a complex imagery and symbolism that touches on the deepest intuitions of human experience and personal development, and exercises an archetypal unconscious appeal akin to the nature of fairy tales. The musical language, richly melodic and theatrically powerful, looks back to Rossini and the traditions of bel canto, and yet forges a new formal pliancy and dramatic urgency. The harmony and orchestration, the melodramatic plot, and overwhelming stage effects (especially the famous act 3 Ballet of the Nuns, a touchstone of dark Romanticism) confirmed Meyerbeer as the leading opera composer of his age. His style fuses German counterpoint, Italian melody, French grandeur, and unprecedented orchestral riches in a unique and overwhelming artistic blend.

Robert became one of the greatest successes in the history of opera. In the first two years of its history it was given in 69 different theatres, and was performed 754 times at the Paris Opéra until 1893. This huge success was reflected in more than 160 transcriptions, arrangements, paraphrases and fantasias for the orchestra, military band, dance band, piano and other solo instruments written between 1832 and 1955. After many years of neglect, there is a resurgence of interest in this work with its fascinating appeal.

This book is devoted to the story of this exceptional opera. It traces the origins, the première, the performance history, and also considers the special characteristics of both the libretto and the music. One of the most intriguing aspects of Robert le Diable was the nature of the iconography generated by its most famous scenes. Artists and illustrators responded in many different ways to the Gambling Scene, the Scene at the Cross, the Cloister Scene for the legendary Ballet of the Nuns, and the great trio in act 5. All of these are examined in terms of the the many different pictorial and plastic responses they inspired over some 60 years.

Robert Ignatius Letellier has specialized in the music and literature of the Romantic Period. He has studied the work of Giacomo Meyerbeer (a four-volume English edition of his diaries, a collection of critical and biographical studies, a guide to research, two readings of the operas, as well as compiling and introducing editions of the complete libretti and non-operatic texts, and a selection of manuscripts facsimiles). He has also written on the ballets of Ludwig Minkus, compiled a series of scores on the Romantic Ballet, a sourcebook of the French opéra-comique, a study of Daniel-François-Esprit Auber, and edited anthologies of Auber’s overtures, ballet music, and a series of his operatic vocal scores.