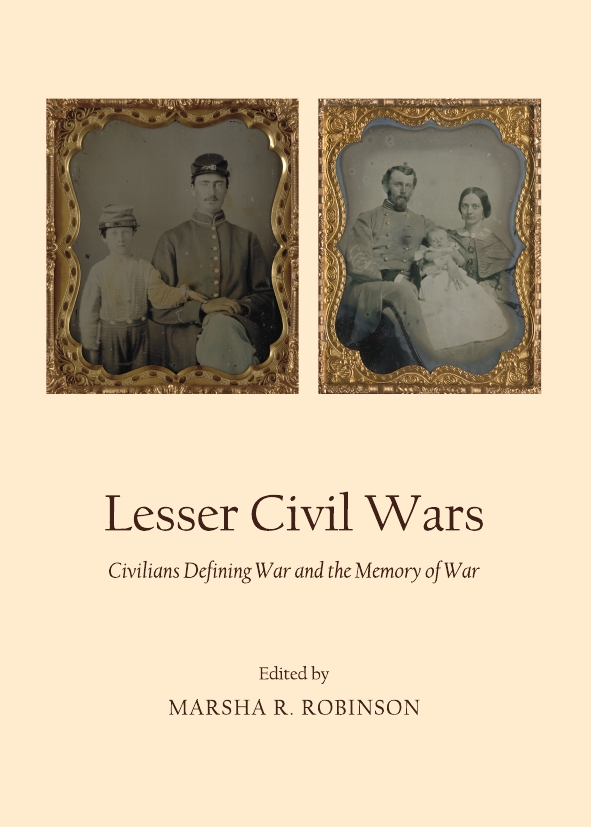 Lesser Civil Wars: Civilians Defining War and the Memory of War is an edited volume that surveys three hundred years of the Memory of war and the Will to war in the greater Ohio River Valley and Great Lakes region. Military theorists from von Clausewitz, to Dingiswayo and Chandragupta, calculated the Will of their own soldiers and of the enemy’s soldiers. Sometimes the Will is assigned an erroneously low strength, as Abraham Lincoln learned quickly at the onset of the United States Civil War.

In this volume, we examine the civilian production of the national Will to fight future wars through the least civil war – each individual’s war to remember or to forget – and no armistice or accord brings this internal battle to an end. This is not a book about the atrocities committed during war. This is a book about the very nature of the Will-Memory-Will cycle, where the Memory of war continues for generations until a new war requires the resurrection of the Will. As these essays show, sometimes it only takes a few individuals to prosecute these Memory wars with rules of engagement that do not necessarily include civil behavior.

By focusing on microhistories from a specific region and by bracketing the US Civil War with an essay about a century prior to it and essays about the century following it, we are able to demonstrate the power and energy of the incubating stage of Memory in the Will-Memory-Will cycle. In the greater Ohio River Valley and Great Lakes region, ordinary civilians controlled and incubated the memories of the Iroquois Wars, the French and Indian/Sevens’ Years War (1756–1763), the American Revolution (1776–1783) and the War of 1812, and they converted Memory into the Will to fight the US Civil War and the Vietnam War. In these chapters, we present micro-wars between civilians over control of the Will of a nation. They are, indeed, lesser civil wars.

Marsha R. Robinson is a graduate of the Georgetown University School of Foreign Service, Central Connecticut State University, and the Ohio State University, where she earned her doctorate in history. In addition to being the author of Matriarchy, Patriarchy and Imperial Security in Africa: Explaining Riots in Europe and Violence in Africa, she has presented at international conferences in the US, Nigeria and Norway. Currently, she is working on a monograph about comparative sustainable development systems, in addition to developing the Inverting History with Microhistory series.