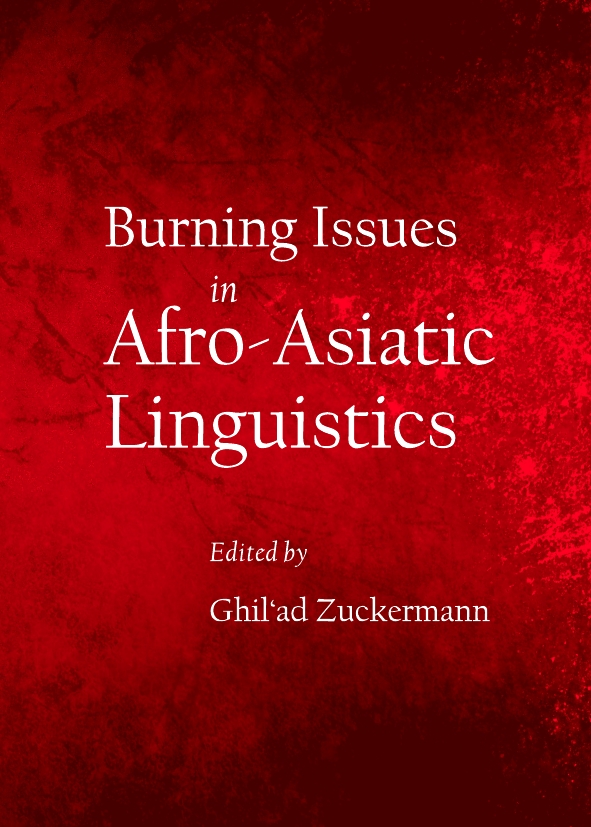 This refereed volume is a collection of selected scholarly articles resulting from research conducted for the first international Australian Workshop on Afro-Asiatic Linguistics (AWAAL), held on 11–13 September 2009 at the State Library of Queensland, Cultural Centre, Stanley Place, South Bank, Brisbane; as well as at the Great Court, the University of Queensland, St Lucia, Brisbane. The University of Queensland has been home to scholars and linguists such as Georges Perec, Eric Partridge and Rodney Huddleston.

Professor Ghil‘ad Zuckermann (DPhil, Oxford; PhD, Cambridge, titular; MA, Tel Aviv, summa cum laude) is Chair of Linguistics and Endangered Languages at the University of Adelaide, Australia. He is also Visiting Professor at the Pilpel Lab of the Molecular Genetics Department at the Weizmann Institute of Science, Rehovot, Israel, and at the Israel Institute for Advanced Studies, Hebrew University of Jerusalem, as well as ‘Oriental Scholar’ and Project 211 Distinguished Visiting Professor at Shanghai International Studies University, China. He is the author of the revolutionary bestseller Israelit Safa Yafa (Israeli – A Beautiful Language; Am Oved, 2008), Language Contact and Lexical Enrichment in Israeli Hebrew (Palgrave Macmillan, 2003), Revival Linguistics (Oxford University Press, forthcoming), and three chapters of the Israeli Tingo (Keren, 2011). He is the editor of “Jewish Language Contact” (2013), a special issue of the International Journal of the Sociology of Language. He is currently establishing Revivalistics, including Revivalomics and Revival Linguistics, and has recently launched the reclamation of the Barngarla Aboriginal language in Port Lincoln, Whyalla and Port Augusta, South Australia. He was an Australian Research Council (ARC) Discovery Fellow in 2007–2011 and Gulbenkian Research Fellow at Churchill College, Cambridge in 2000–2004. He has taught inter alia at the University of Queensland, University of Cambridge and National University of Singapore, and has been a Research Fellow at the Rockefeller Foundation’s Study and Conference Center, Villa Serbelloni, Bellagio, Italy; the Research Centre for Linguistic Typology (RCLT), Institute for Advanced Study, La Trobe University; the Harry Ransom Humanities Research Center, University of Texas at Austin; and Kokuritsu Kokugo Kenkyūjo, National Institute for Japanese Language and Linguistics, Tokyo.