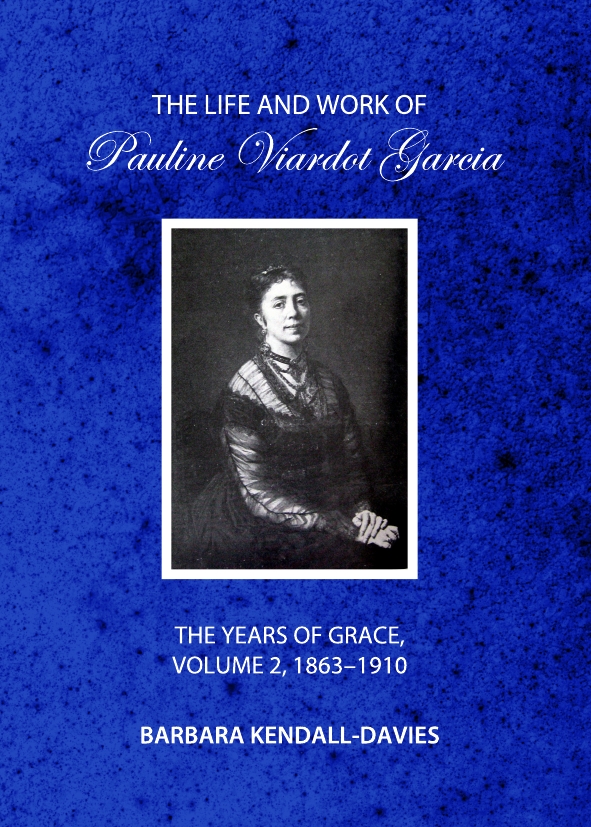 This is the second volume of the Life and Work of Pauline Viardot Garcia: The Years of Grace, 1863–1910. Viardot was an international opera singer, composer and teacher who was seminal in the world of music in the 19th century. She came from a famous family of musicians, her father being the Spanish tenor, composer and teacher, Manuel del Popolo Vicente Rodriguez Garcia. Her mother, Joaquina Sitchès, was also a singer and taught Pauline; her brother Manuel was an eminent singing teacher and inventor of the laryngoscope and her sister was the legendary singer, Maria Malibran. Her friends and colleagues are household names, including the writer George Sand and her lover Frederick Chopin, Clara and Robert Schumann, Johannes Brahms, Richard Wagner, Gabriel Fauré, Jules Massent and Franz Liszt who taught Pauline piano and on whom she had a girlish crush. Though considered ugly, she had a unique fascination and many men fell in love with her, including her husband, Louis Viardot, historian and man of letters; the Russian writer, Ivan Turgenev; Maurice Sand, artist son of George Sand; the composers Charles Gounod and Hector Berlioz, as well as her mentor, the painter Ary Scheffer.

Although famous in her day, after her death in 1910 she fell into obscurity but her songs are appearing again and her influence as a teacher has spread worldwide.

The first volume largely covers Viardot’s international singing career from 1836 to 1863 and the second volume, although also featuring her performances, concentrates more fully on her work as a composer and teacher as well as a famous musical hostess.

Although ostensibly the life, professional and personal, of an amazing individual, the book is also a portrait of an age, culturally, socially and politically.

As the author’s first volume about Viardot, the Life and Work of Pauline Viardot Garcia: The Years of Fame, 1836–1863, was only the second biography in English of the singer, her work has been seminal and has attracted interest worldwide. The second volume, The Years of Grace, published by Cambridge Scholars Publishing, has been enthusiastically anticipated and includes a CD of three Viardot songs, performed by Giles Davies.

Barbara Kendall-Davies’ operatic career lasted from 1965 to 1995 and included the first Glyndebourne tour and a season in Sussex, as well as seasons at Covent Garden in Moses and Aaron, Boris Godonov and Carmen. She also sang at Lille and Marseilles Opera and toured Germany, Switzerland and Japan. She performed principal roles with numerous smaller opera companies and toured throughout the British Isles from 1965 to 1985 with The Apollo Group of London, of which she was a founder member and Artistic Director. She is married to baritone, Christopher Davies, and their son Giles is also a singer.

''As a former singer, Barbara Kendall-Davies has considerable technical knowledge and writes perceptively about singing. The book is a result of years of travel and research and many wonderful images illustrate its pages. There is much of interest here for music lovers since the age of romanticism is covered extensively and Chopin, Schumann, Brahms, Liszt, Gounod, Berlioz, Massenet, Saint-Saens, Faure and Wagner all cross paths with our protagonist. Pauline Viardot Garcia and her legendary friend, Ivan Turgenev, are at the core of the world that Kendall-Davies ably documents.''
- Harold Bruder, The Record Collector, 58:1 (March 2013), 58-59.

"Viardot’s position in the mid-19th century operatic world was undoubtedly important, and Kendall-Davies demonstrates in great detail the full amplitude of her social connections and influence. Indeed, with a circle of friends and colleagues (not to mention putative lovers) that reads like a roll-call from the cultural pantheon of the time, Viardot is the sort of figure many opera-lovers might wish they had been able to meet."