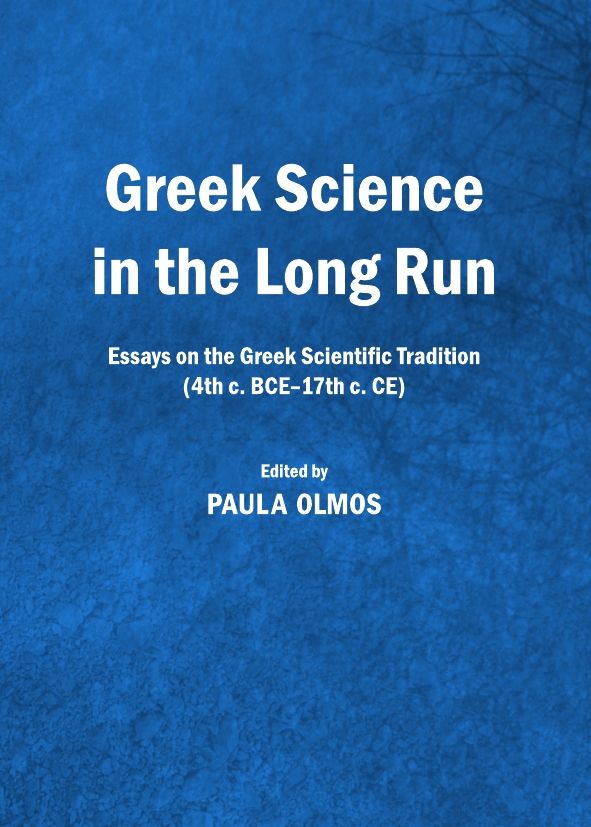 Greek traditions relating to both the arts and sciences of life and health and those regarding the systematic development of theories of measurement and quantification enjoyed an incredibly long reputation and showed a kind of versatility that challenges any simplistic, dogmatic or a priori viewpoint about the meaning and social function of systematic knowledge. In this sense, they allow us to focus on very specific traits of the multiple processes of production, textual arrangement and transmission of the sciences.

Greek Science in the Long Run: Essays on the Greek Scientific Tradition (4th c. BCE–17th c. CE) offers a collection of essays in which renowned international experts in ancient, medieval and early modern history and culture and the history of science, together with young researchers in these same fields, reflect upon different aspects of this long-standing prominence of Greek models and traditions in the changing configuration of the sciences. The main aim of the volume is to revisit the different processes by which such doctrinal traditions originated, were transmitted and received within diverse socio-cultural contexts and frameworks. The specialized scholars and academics contributing to the volume embrace advanced standpoints regarding these issues and ensure a successful and substantial contribution to one of the lines of research that has recently attracted the most attention within the field of humanities: the interdisciplinary project of a historical epistemology seriously informed by an advanced history of epistemology or the sciences.

Paula Olmos (Madrid, 1968) has been based at several Spanish academic institutions (UC3M, UNED) as a Researcher in Classics and Philosophy, and has been a Visiting Scholar at the universities of Cambridge (UK), Pavia (Italy) and Stanford (USA). Her research interests include different aspects of the history of logic, argumentation and rhetoric – particularly in periods with a strong classical inspiration, as the early-modern Spanish humanism or the Latin late antiquity – as well as the contemporary theory of argumentation, in which she takes a rhetorical stance. She has published papers on these issues in journals like Informal Logic, Theoria, Res Publica Litterarum (Salerno), Renaissance Studies, Argumentation, Studies in History and Philosophy of Science (Cambridge) and Intellectual History Review. She is the author of a monograph on the Spanish sixteenth-century philosopher Pedro Simón Abril (Los negocios y las ciencias. Lógica, argumentación y metodología en la obra filosófica de Pedro Simón Abril (ca. 1540–1595); Madrid: CSIC, 2010) and co-editor, together with Luis Vega, of the collective encyclopaedic volume Compendio de Lógica, Argumentación y Retórica (Madrid: Trotta, 2011, 2nd ed. 2012).