Home / Buy A Book / Social Sciences / The Impact of Legislation and Regulation on the Freedom of Movement of Capital in Estonia, Poland and Latvia

The Impact of Legislation and Regulation on the Freedom of Movement of Capital in Estonia, Poland and Latvia 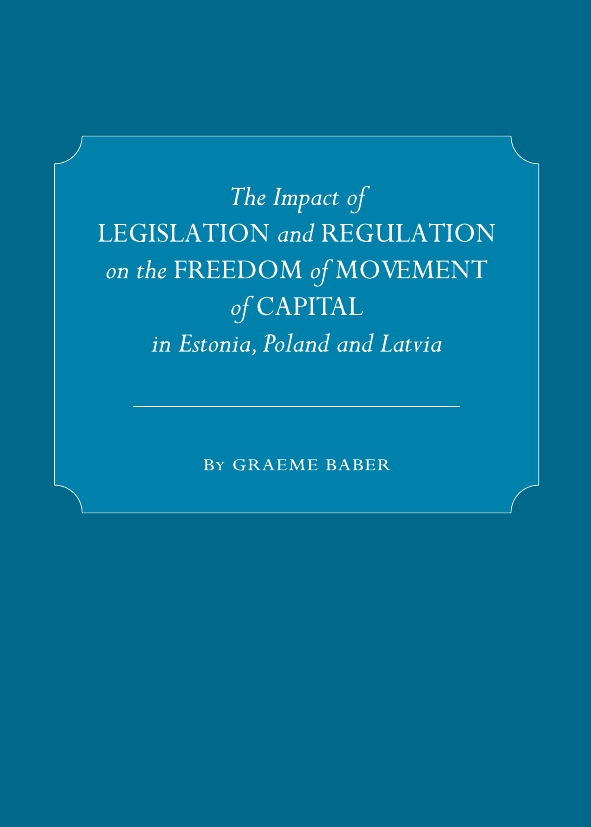 One of the fundamental freedoms of the European Union’s Internal Market is the free movement of capital. National barriers to the cross-border movement of capital and payments are prohibited, not only between Member States of the Union, but also between these States and third countries. The book investigates to what extent Estonia, Poland and Latvia have implemented laws that comply with this principle. It compares and contrasts the similarities and differences between these three Member States in how their legislation and regulations affect such free movement.

Graeme Baber is an LLM Lecturer at BPP Law School, specialising in UK and International Financial and Corporate Law. He is qualified in both law and economics, with a Doctor of Philosophy degree from the School of Oriental and African Studies. He has written works on the taxation of corporate debt, thin capitalisation, and computer sciences. His enthusiasm for music, especially of the baroque period, has led to an interest in the composition of classical pieces; he is also a church organist, an exponent of the violoncello and an amateur choral singer.

“The free movement of capital is by now a familiar element of European Union law. Dr. Baber’s book, however, conducts a very thorough analysis of the extent to which the legal and regulatory framework, in three of the Member States which acceded to the EU in 2004, actually complies with this principle and exposes some key weaknesses. Unusually for a book on law and regulation, the work includes a model more often found in the finance or economics literature to examine the actual effect that the compliance or otherwise has in practice on capital flows. That Dr. Baber’s book brings together consideration of Polish, Estonian and Latvian measures in one work will make it possibly a unique contribution and indeed one which I myself would find highly useful to refer to for my own work, both teaching and research.”
—Richard Alexander, Lecturer in Financial Law, Centre for Financial and Management Studies, School of Oriental and African Studies, University of London

“Dr. Baber’s manuscript conducts a thorough analysis of the extent to which the legal and regulatory framework of European Union law which sanctions free movement of capital, in three of the Member States which acceded to the EU in 2004, actually complies with the principle of free movement of capital. This analysis leads to the exposure of a number of key weaknesses in term of compliance in these three countries. While there is emerging literature in English examining certain limited aspects of law and regulation in Poland, the coverage of its counterparts in the Baltic states is in short supply.
A comprehensive consideration and comparative analysis of Polish, Estonian and Latvian measures in financial law and regulation make this book possibly unique in the literature and in the market.”
—Laixiang Sun, Professor and Head of Department, Centre for Financial and Management Studies, School of Oriental and African Studies, University of London