Home / Buy A Book / Physical Sciences / Rebuilding Sustainable Communities for Children and their Families after Disasters: A Global Survey

Rebuilding Sustainable Communities for Children and their Families after Disasters: A Global Survey 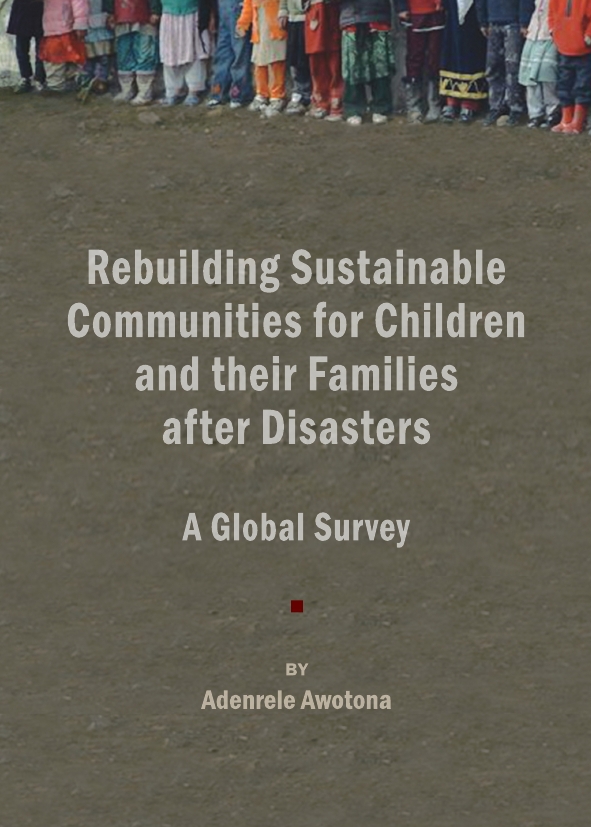 Disasters impose enormous misery on children, the most vulnerable members of the community. Records show that two million children have died as a direct consequence of armed conflict over the past decade. Globally, millions more have suffered death, disease, and dislocation as a result of such natural disasters as earthquakes, droughts, and floods. And even when emergency relief is available, permanent human damage remains; all too often, families fall apart, women are assaulted and degraded, and children are left to take care of themselves.

In November 2008, the Center for Rebuilding Sustainable Communities after Disasters at the University of Massachusetts Boston, USA, hosted an international conference to examine how to reconstruct sustainable communities that would be safe and secure for children and their families after disasters.

This volume collects some of the papers that were presented at the conference. It is remarkable for the sheer assortment of topics covered. These include the role of gender equality in alleviating poverty and assisting children, their families and their communities after disasters; war and child soldiers; lessons from Hurricane Katrina and the Tsunami; the nature of psychosocial resilience and its significance for managing mass emergencies, disasters and terrorism; and, the promotion of human dignity in the creation of sustainable environments that empower families in the aftermath of disasters.

This book is part of a series. View the full series, "Rebuilding Sustainable Communities after Disasters", here.

Adenrele Awotona is the Director of the Center for Rebuilding Sustainable Communities after Disasters at the University of Massachusetts, Boston, USA. He was a Director of Studies for the British Council International Seminars (Reconstruction after disasters) in the United Kingdom. His publications include: Rebuilding sustainable communities in Iraq: Policies, Programs and International Perspectives (edited, Cambridge Scholars Publishing, 2008); and, Reconstruction after disaster: Issues and Practices (edited, Ashgate, 1997).

"All the contributions in [the Rebuilding Sustainable Communities after Disasters] series have the potential to enhance our knowledge in the mechanisms of handling disasters, and our future preparedness. The four books, taken together, will also enhance international ability to deal with future disasters so that communities can be rebuilt with as little pain as possible to the most vulnerable members of the communities. The four books are highly recommended to bureaucrats and policy makers around the globe, especially civil servants working with international organizations, like the United Nations, in anticipation of future disasters. As an academician myself, I would strongly recommend the books to my colleagues in the social and economic sciences departments and other related academic disciplines."

"I write to strongly recommend this book to researchers, scholars, university professors, mid-management development personnel, governmental and non-governmental officials concerned with matters of sustainable development and communities. [...] The book provides compelling and powerful arguments for the sustainability of communities. It is with the highest level of enthusiasm that I recommend this book."

"Professor Awotona has put together an excellent collection of essays from people who have been at the forefront of responding to the needs of the most vulnerable groups after such disasters. …This book is a must have for everyone, for we are all potential victims of disasters, and knowing how to protect and heal ourselves and our families is the starting point to disaster recovery."

"Everybody working with advocacy for young children should read this book. When you then have read it and just feel overwhelmed by the situation for many children in the world, read A WORLD FIT FOR CHILDREN published by UNICEF, and you will realize that children themselves have the answers to many of the questions dealt with here."