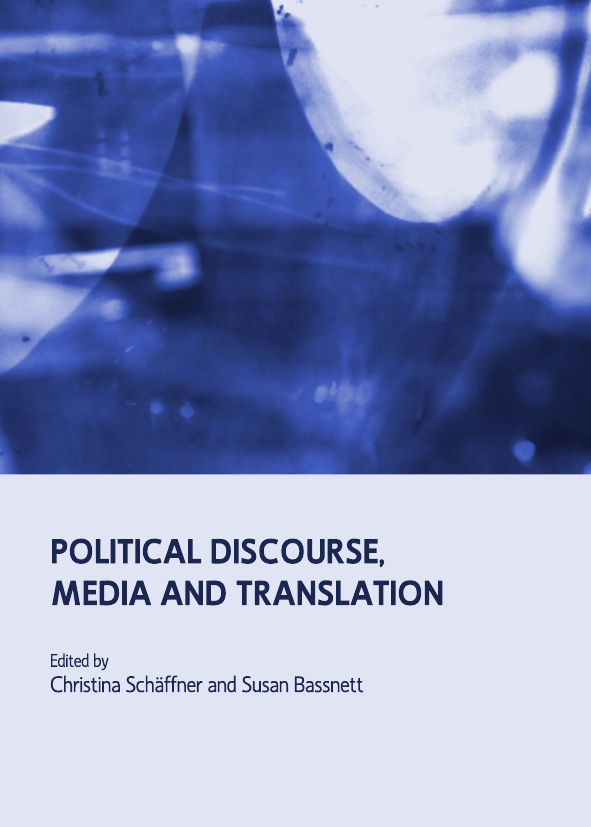 This volume addresses the role played by translation in international political communication and news reporting and brings to light the usually invisible link between politics, media, and translation. The contributors explore the interrelationship between media in the widest sense and translation, with a focus on political texts, institutional contexts, and translation policies. These topics are explored from a Translation Studies perspective, thus bringing a new disciplinary view to the investigation of political discourse and the language of the media. The first part of the volume focuses on textual analysis, investigating transformations that occur in translation processes, and the second part examines institutional contexts and policies, and their effects on translation production and reception.

Christina Schaeffner is Professor of Translation Studies at Aston University, Birmingham. Her main research areas are political discourse and translation, metaphor in translation and translator training; she has published widely on these topics. Her most recent publications include “Political Discourse and Translation” in Li Wei and Vivian Cook's edited volume Contemporary Applied Linguistics: Language for the Real World Volume 2 (London and New York: Continuum 2009), “Does translation hinder integration?” in Forum (7(1)/2009), and “‘The Prime Minister said...’: Voices in translated political texts” in SYNAPS (22/2008). She is a staff member of CETRA, an annual international doctoral programme in Translation Studies.

Susan Bassnett is Professor of Comparative Literature at the University of Warwick and a leading world expert in Translation Studies. Her books include Translation Studies (3rd ed. 2002), Constructing Cultures (1996) with Andre Lefevere, Postcolonial Translation (1999) with Harish Trivedi, The Translator as Writer (2006) with Peter Bush and Translation in Global News (2009) with Esperanca Bielsa. She is currently writing a book on trends in translation studies in the twenty-first century.

“Political Discourse, Media and Translation is an outstanding tribute to the interdisciplinary nature of TS. Page after page, it discloses the crucial role that the translator's agency plays within this discipline and in relation to the public. [...] The clarity, the precision and the accuracy of the content, as well as the interdisciplinary character of the whole book, make this contribution a benchmark for scholars and students involved in the fields of TS, sociology, psychology, international relations, cultural and media studies.”
- Cecilia Foglia
University of Montreal; TranscUlturAl: A Journal of Translation and Cultural Studies, 5: 1-2 (2013)

“Since the cultural turn in translation studies, which occurred during the early 1990s, scholars have focused closely upon issues of politics and power in their analysis of translated texts. Yet the corpora studied tended toward the literary, business, science, and technology; surprisingly few studies focused on political texts in the narrow sense of the word. This book fills that gap. Here we have a political analysis of political texts found in journalism and the mass media, politics squared, the exponential insights of which are profound. This book should appeal to students of translation, European languages and language policy, political science, communication, journalism, and cultural and media studies.”
- Professor Edwin Gentzler
Translation Center, University of Massachusetts Amherst

“At the core of this volume on translation in the media are fundamental issues such as the complexity, invisibility and actual scope of 'translation': what is it, who does it, and why? Translation is contextualised in terms of its key role in the (re)presentation and (re)context-ualisation of institutional and personal discourses, covering both print and new media. By focusing on the practice of translation in this dynamic context, the book offers an important contribution to an under-researched field and in so doing, broadens and challenges current views on translation. Using a series of case studies the book demonstrates how translation helps to mediate, reframe and re-contextualise news items, public and governmental communications, and political speeches in a range of European and North American countries. Issues concerning the nature and scope of translation and its agents are addressed, preparing the way for future studies and possible answers to the important questions which the book raises.”
- Professor Margaret Rogers
Centre for Translation Studies, Department of Languages and Translation Studies, University of Surrey, UK