Afroasiatic Studies in Memory of Robert Hetzron: Proceedings of the 35th Annual Meeting of the North American Conference on Afroasiatic Linguistics (NACAL 35) 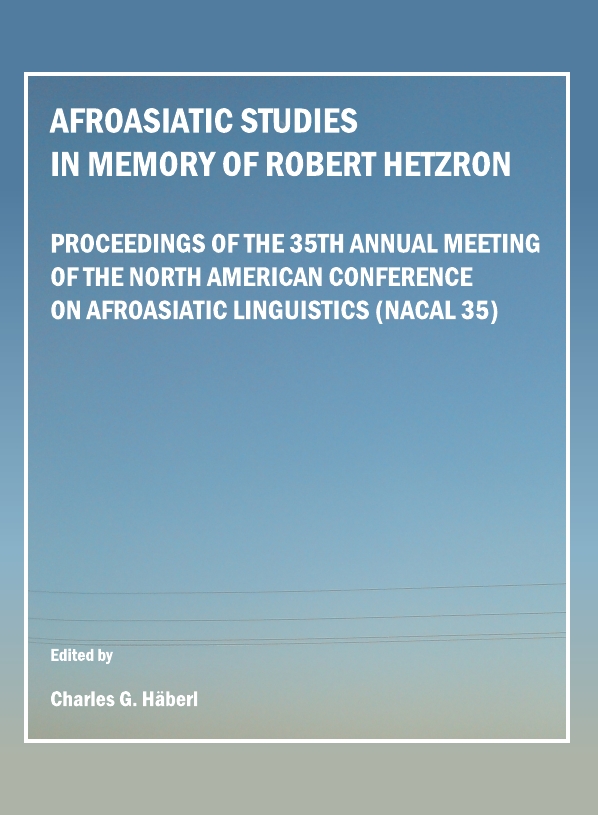 Robert Hetzron first organized the North American Conference on Afroasiatic Linguistics (NACAL) at the University of California, Santa Barbara in 1973 and passed away only six months after it had completed a quarter century of annual meetings. He would undoubtedly have been pleased to know that NACAL is still going strong, and that ten years after his passing it attracted no fewer than thirty-six scholars from the United States, Canada, and eight other countries, who presented on topics near and dear to his heart such as phonology, morphology, syntax, language contact, classification, subgrouping, and the history of scholarship, in languages such as Amharic, Arabic, Aramaic, Egyptian, Hebrew, Omotic, and others, as well as the groups to which they pertain.

Since he established it, NACAL has served a unique role among the meetings of learned societies in North America. Only a handful of organizations worldwide hold annual meetings dedicated to Afroasiatic linguistics, and NACAL is one of a very small number of venues where linguists from all sub-disciplines and schools of thought meet to share their research. NACAL is also an academic nexus, a unique node at which graduate students at the beginning of their careers rub shoulders with the native speakers of the languages which they study and with the titans of their fields, men and women of an almost legendary stature such as Hetzron himself. This volume contains sixteen contributions from these scholars, on a broad cross-section of topics within the field of Afroasiatic linguistics.

Charles G. Häberl, Ph.D. (2006) Harvard University, teaches Arabic and Aramaic at Rutgers, the State University of New Jersey. He is also the author of The Neo-Mandaic Dialect of Khorramshahr (Wiesbaden, 2009).