The Evolution of the South African System of Innovation since 1916 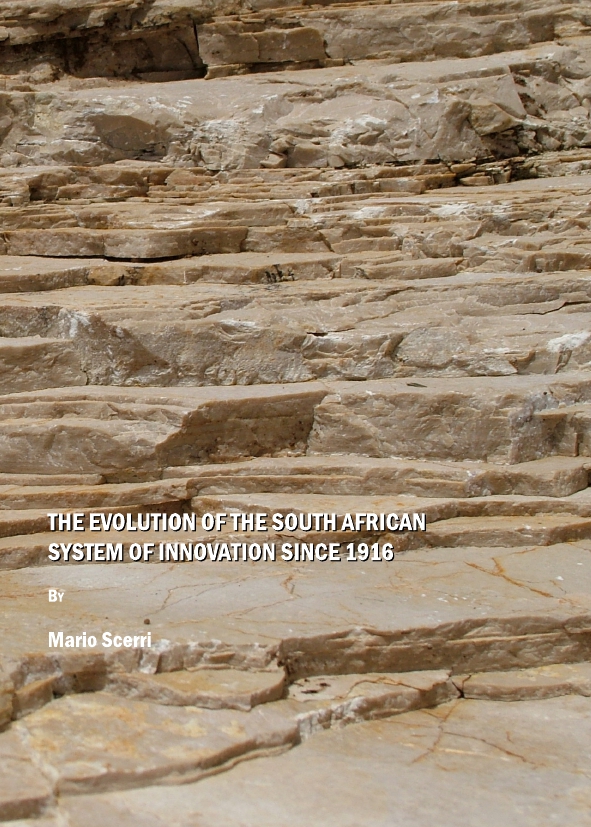 In this book, Mario Scerri provides the reader with a novel and sweeping rendition of South Africa’s economic history from the early part of the twentieth century to the present. He applies a broad innovation systems approach to this history spanning the period from 1916, which saw the drafting of South Africa’s first Science and Technology plan to the first fourteen years of the post-apartheid period.

The introduction of the book lays out the scope of the work and its focus on the identification of continuities and ruptures in the economic history of South Africa. The first part of the book deals with the theoretical foundations of the approach. The first chapter in this section looks at the emergence of evolutionary economics and innovation systems theory as the basis for the main countervailing argument against the neoclassical/neoliberal orthodoxy. In the course of this chapter the foundation is laid for the development of an alternative general theory of economics. The second chapter covers the main debates on the economic history of South Africa and looks at the several varieties of the liberal and Marxist renditions of this history. The theoretical section lays the foundation for the history that is covered in the four chapters which follow. These cover three broad periods since 1916. The first runs up to 1948 with the election victory of the National Party. The second covers the apartheid period and the last follows with an account of the post apartheid political economy. An endnote provides the basis for the analysis of what may possibly be the emergence of a fourth main period in the evolution of the South African system of innovation.

The Evolution of the South African System of Innovation since 1916 opens up a novel engagement with the complex phenomenon of apartheid, its genealogy and its aftermath. It will appeal to economists and economic historians who are interested in the economy of South Africa. It will be of particular interest to evolutionary economists who use the systems of innovation approach as an alternative to mainstream neoclassical economics in the analysis of dynamic economic systems. For this particular audience, this book will provide a welcome addition to the growing body of literature in this area, especially given the novelty of its historical approach.

Mario Scerri is a Professor of Economics and a Senior Research Fellow in the Institute for Economic Research on Innovation (IERI) at the Tshwane University of Technology in South Africa. His research focus is on the evolution of innovation systems, specifically within Southern Africa.

“Mario Scerri has collated and analysed an impressive body of literature and has produced the first comprehensive and contextual analysis of South Africa’s National System of Innovation. He carefully weaves together a coherent narrative which blends empirical detail with theories of innovation. He has placed at the disposal of academic-scholars, activist-researchers and policymakers an invaluable intellectual resource.”
Rasigan Maharajh, Chief Director, Institute for Economic Research on Innovation (IERI), South Africa. rasigan@antfarm.co.za; maharajhr@tut.ac.za

“Mario Scerri integrates the analysis of systems of innovation with a broader discourse on power to a degree that is rarely found in the literature. His analysis of the South African system of innovation is a novel and valuable contribution to the current debates in this field.”
Mammo Muchie, NRF/DST Research Professor Chair Holder, IERI, TUT, South Africa; Coordinator of the Development, Innovation and International Political Economy Research in Aalborg University, Denmark: muchiem@tut.ac.za mammo@ihis.aau.dk, http:// www.diiper.ihis.aau.dk