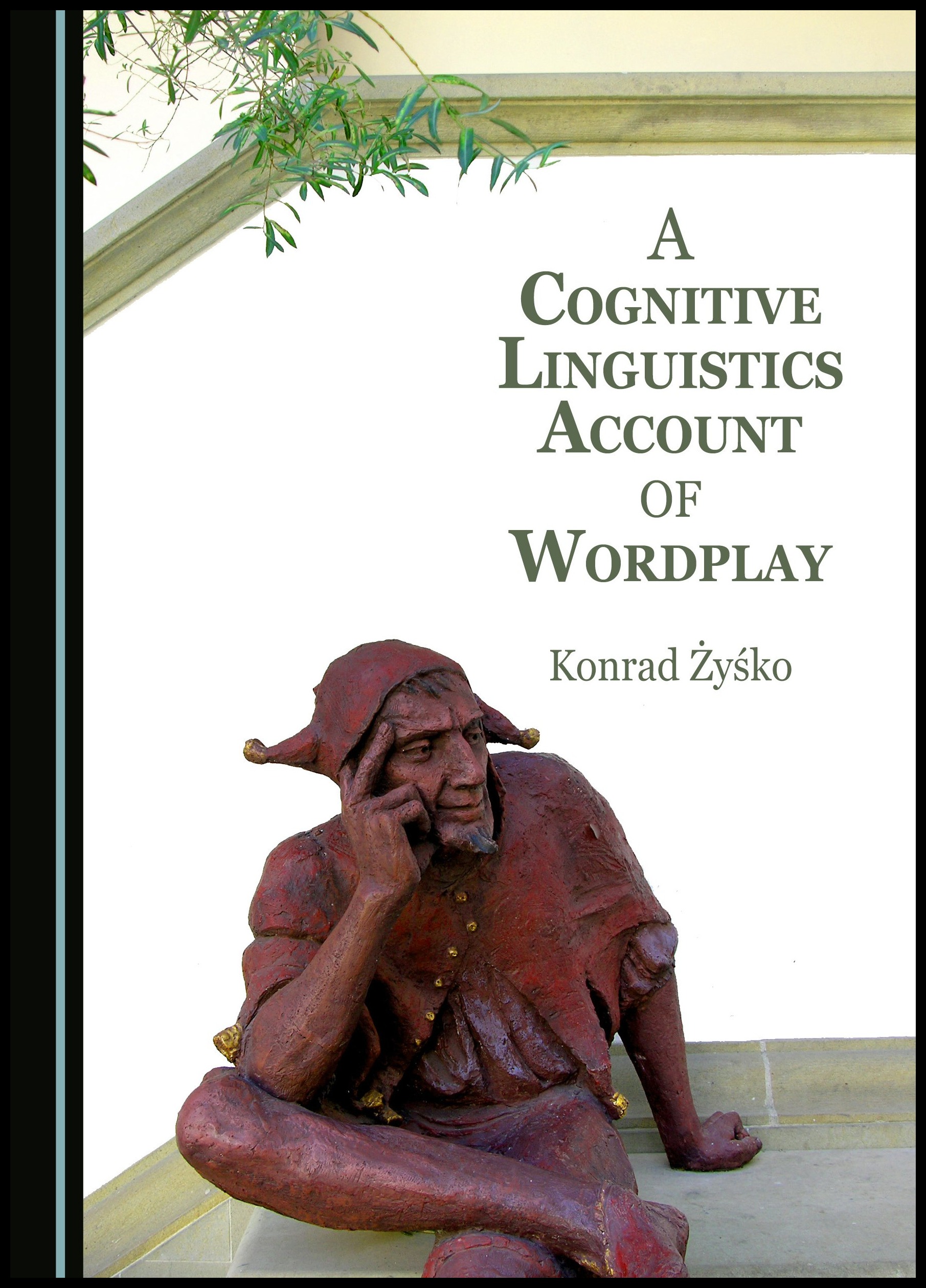 Even though the ability to create witty puns seems to be an inherent skill of humankind, an apt explanation of their linguistic nature has evaded many academic descriptions. Konrad Żyśko’s book A Cognitive Linguistics Account of Wordplay is an exception.

Our gratitude for the below review goes to Marta Agüero Guerra (University of Iowa). The piece was first published in the European Journal of Humour Research and is reproduced here in full.

“Wordplay has been a focus of interest since Antiquity, starting with the early works of Cicero and Quintilian. Some authors, such as Freud (1905), focus on the distinction between wordplay and puns, while others, such as Delabastita (1996) and Ritchie (2004), have considered the two as identical. Linguistic studies have examined wordplay as a deviation from the rules of standard language and have offered different explanations of the patterns that lead to it. However, there is a need for a unified account of how this particular use of language works.

Konrad Żyśko has published several works on the taxonomy and translation of wordplay, as well as on cognitive linguistics (e.g. Żyśko 2012a, 2012b, 2014, 2015). His aim in his more recent book, A Cognitive Linguistics Account of Wordplay, is to provide a comprehensive explanation of the underlying cognitive mechanisms involved in the production and comprehension of wordplay. He offers a taxonomy, as well as several examples of possible analysis by means of visual representations of cognitive schemas. The book is structured into three chapters.

Chapter 1 offers some preliminary remarks about wordplay. The chapter departs from the traditional definitions and discusses the phenomenon in relation to standard language. To that end, the author applies well-known linguistic concepts, such as Grice’s maxims of conversation (1975), to the description of wordplay, to show that it is more flexible and open for experiment than standard language. Żyśko then highlights three features of wordplay.

The first is the similarity of forms, a concept taken from Delabastita (1996), who considers wordplay as a phenomenon that opposes two linguistic structures with similar forms and meanings. The similarity can be phonological, orthographic, morphological, syntactic, or semantic. For wordplay to be perceived, the utterance needs to be considered in a specific context. The second feature Żyśko presents is ambiguity, which can be phonic, syntactic, or alliterative. Although the author agrees with scholars such as Attardo (1994) that ambiguity can be the basis of wordplay, he argues that not every instance of ambiguity (especially those based on homonymy) results in wordplay.

The last feature that he highlights is humour. It is commonly claimed that wordplay is a linguistic device used for entertainment. Żyśko recognises the novelty of wordplay and the humorous effect it can evoke. Both wordplay and humour require a shared contextual juxtaposition to be comprehended, as explained by Koestler in his bisociation model (1964), or Raskin in his Semantic Script Theory of Humour (1985). Wordplay and humour depend on a perceived incongruity and the selection of a salient meaning for their interpretation. However, as Żyśko points out, the two opposing scripts in wordplay may not always lead to humorous effects; therefore, humour theories do not suffice to explain it.

In the last part of this chapter, the author attempts to categorise instances of wordplay, proposing a linear taxonomy. Żyśko suggests that wordplay is based on polysemy, homonymy, parody, malapropisms, eggcorns, rhymes, spoonerisms, and neologisms. He then concludes that wordplay is “a conceptual phenomenon that involves some complex mental operations to be processed” (p. 25).

Chapter 2 is devoted to cognitive linguistics. Here, the author revisits the theories that serve as the basis for his analysis. Following Langacker (1987), Żyśko argues that meaning is equated with conceptualisation, or seeing words as points of access to rich sources of knowledge. For that reason, he insists, meanings are selected from an infinite set of possibilities. Thus, he explores the general cognitive processes that take place in perception. The concepts of image schema, domain, and script seem to be the basis of his explanation, i.e. abstract templates that emerge through our interactions with the world (Lakoff 1987; Langacker 1987). For wordplay to be produced and perceived, it has to be related to the decoders’ previous experiences, stored as part of their encyclopaedic knowledge. Wordplay usually depends on the decoder referring back to that knowledge in order to identify a shift from one domain into another, depending on the relevance or salience of the domain. For this reason, context is crucial in guiding the decoder towards selecting the appropriate meaning.

Żyśko further develops this argument by means of different cognitive theories. Dismissing approaches based on semantic frames (Fillmore 1968) or idealised cognitive models (Lakoff 1987) as subjective and context dependent, Żyśko suggests that Conceptual Metaphor Theory (Lakoff & Johnson 1980) and Conceptual Blending (Fauconnier & Turner 1996) offer better ways to conceptualise wordplay. The former proposes that human thought is metaphorical in nature and that it works through a mapping between a source and a target domain. This, he states, can be understood as the underlying mechanism of some instances of wordplay. However, it cannot account for every instance because the possible metaphorical correspondences could be limitless (p. 48).

The author then explains why Conceptual Blending is a better tool to analyse the generation and interpretation of wordplay. Blending theory allows for projections between more than two mental spaces, a dynamic and spontaneous process that includes entrenched metaphors as well as novel conceptualisations. The author thus builds on the notions of input spaces, the generic space in between, and the subsequent blended space, in order to analyse different examples of wordplay. He concludes the chapter by offering two observations about this approach. The first one is that there can be more than a single set of mappings between input spaces. The second is that blends are embedded in discourse, and this shapes their meaning.

The aim of Chapter 3 is to explain how image schemas allow for the creation and interpretation of wordplay. Żyśko states that wordplay is not only hinged on polysemous sense relations, but also on other types of meaning variations: namely, homonymy and vagueness. He explains that meaning variations happen as a result of conventionalised elaborations of more or less entrenched schemas, and he represents the process by means of visual aids. He then points out that the production and comprehension of wordplay involves a shift in the profile of an expression from an actual plane to its metaphorical elaboration (which he calls a virtual plane), or the other way around. Usually, this meaning extension relies on analogy. Żyśko offers several schematic representations of the transformation for different examples of wordplay that depend on homonymy, polysemy, and vagueness. The examples? are not limited to single lexical items, but also include compounds and phrases. This way, the author demonstrates that cognitive grammar offers a theoretical explanation of the elaborations between the schemas. However, he insists that for the speakers or hearers to encode or decode the target utterances, they need to look for the most salient meaning.

Using examples of lexical and phrasal wordplay, the chapter then offers different graphical explanations of how Conceptual Blending can be used as a tool to analyse the production of new meanings. Here, Żyśko shows how the theory works, both for humorous and non-humorous instances, since humour also depends on the resolution of an incongruity between two scripts. In both cases, the role of Current Discourse Space, or the shared mental space between the speaker and the hearer in a given discourse, is the same (Langacker 2008). The last part of the chapter is devoted to a discussion of the analysability/compositionality parameters of wordplay. Żyśko argues that in some cases, wordplay involves the decomposition of non-compositional formations into compositional ones, usually by shifting from metaphorical meanings to literal senses or physical entities. The more conventionalised an expression, the less analysable (divisible into meaningful components). For that reason, he concludes that the discursive context is essential to analyses of wordplay.

Overall, the book effectively explains the need to analyse wordplay from a new cognitive angle. It includes detailed definitions of different instances of wordplay, as well as an extended theoretical framework. The visual representations help the reader understand the complex cognitive mechanisms involved in the comprehension process. Moreover, the variety of examples of lexical and phrasal instances of wordplay strengthens Żyśko’s premise. Although the argument is compelling, the main limitation, which the author mentions in the conclusion, is the inability to account for instances of wordplay other than polysemy, homonymy, and vagueness. The structure of the book—with a chapter devoted to theoretical explanations and another to their application—while instructive, forces the author to revisit previous explanations or claims, and becomes repetitive at times. On some occasions, there are extensive digressions, such as the discussion of how historical analysis of homonyms could reveal hidden sense relations that are not cognitively salient. The concept of salience is, indeed, something that could have been further explored, with a consideration of the important contributions of Giora (2003). In addition, the relationship between wordplay and humour from a cognitive perspective is only briefly mentioned.

To sum up, this book offers a comprehensive analysis of wordplay that abandons traditional views and focuses on a cognitive linguistics perspective. It is a valuable addition to the existing research on meaning construction, both in wordplay and in other instances of language where there are shifts between opposed or different mental spaces. Żyśko has created an indispensable tool for students and researchers interested in cognitive linguistics, wordplay, and creative uses of language.”

The above article was originally published in the European Journal of Humour Research 7 (4), pp. 161–164. You can click here to see the full article and footnotes.