Featured Review
A Century of Italian American Economics: The American Chamber of Commerce in Italy (1915-2015)"/>

Home / Featured Review
A Century of Italian American Economics: The American Chamber of Commerce in Italy (1915-2015)

Featured Review
A Century of Italian American Economics: The American Chamber of Commerce in Italy (1915-2015) 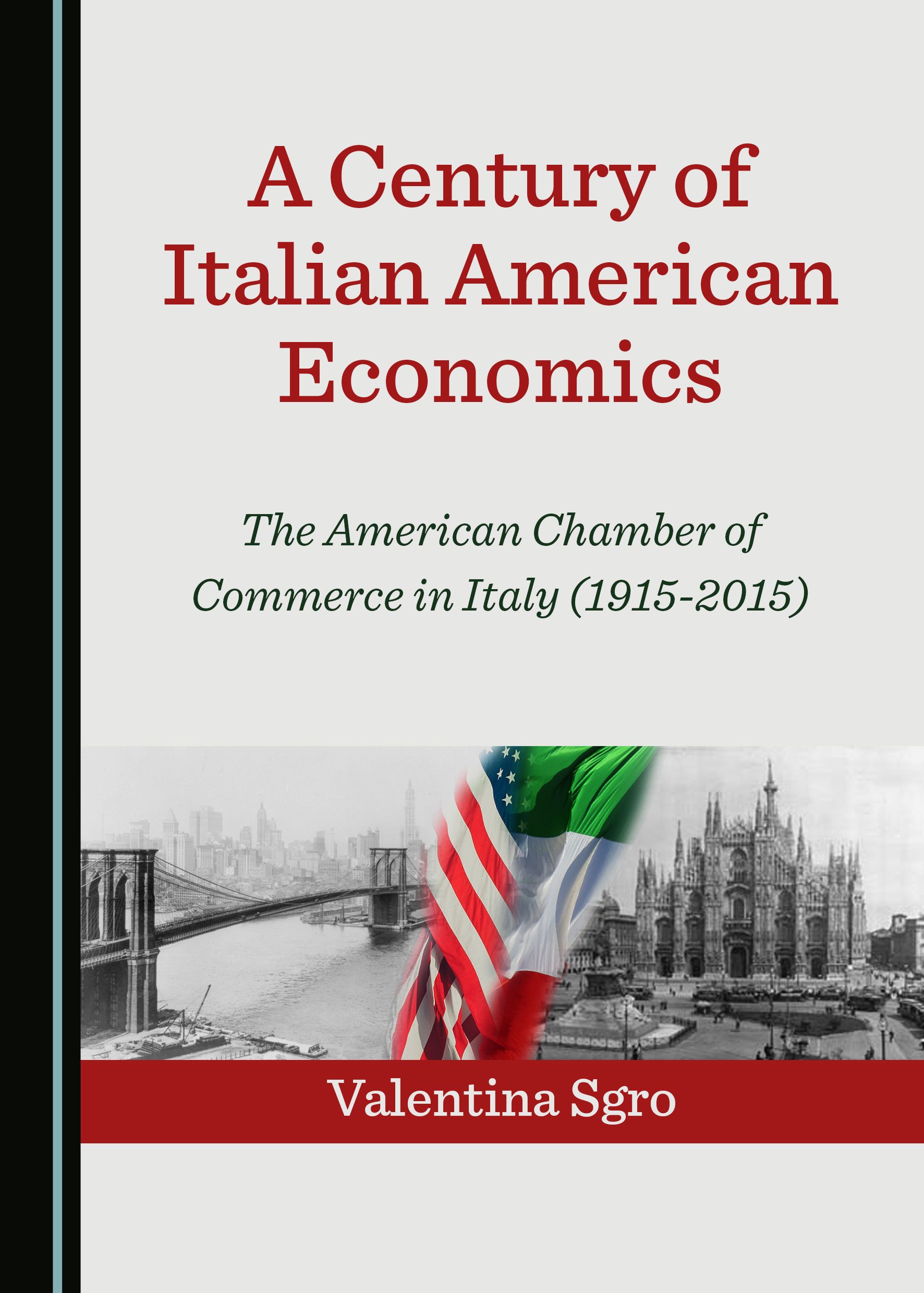 Robert Lucas[1] (1988, p.5) once remarked that “once one starts to think about [economic growth] it is difficult to think about anything else” and, indeed, given the importance of growth, one can see his point. Yet, even now there is much that is not known about why growth rates differ. It is now over sixty years since Solow[2] (1956) put forward his famous growth model, which still remains the standard exposition of growth in introductory macroeconomics textbooks. But the explanation that productivity growth is determined by the exogenous, or unexplained, rate of technical progress is hardly satisfactory. The development in the 1980s of endogenous growth theory is that the rate of technical change is simply rebranded as “ideas”. The production of these ideas is explained simply in terms of expenditures on R&D or in externalities in production that banish diminishing returns to capital.

There are many objections to the theoretical foundations of these models, especially the concept of the aggregate production function, though they which will not be discussed here. Importantly, the work of economic historians, such as David Landes (1998) in his Wealth and Poverty of Nations, shows that there are many complex socio-economic factors affecting both growth and development, which differ in importance both spatially and over time. Furthermore, the work of Douglass North[3] on the influence of institutions, broadly defined, and their change has proven to be of great importance in the growth and development of countries.

A Century of Italian American Economics by Valentina Sgro is very much in this latter tradition. The focus of this work helps explain certain aspects of the causes of the growth of Italy over the last hundred years or so. It does this by elaborating on a much neglected aspect of institutional change that proves to be an important factor. This is the role of the chambers of commerce, and especially that of the American Chamber of Commerce in Italy (AmCham). The book provides an analysis of AmCham both in its own right and in terms of its important contribution to American-Italian business relations and, inter alia, information about investment opportunities. The study examines the impact this has had, and is having, on Italian growth.

The book convincingly discusses two related important factors responsible for influencing Italy’s growth. The first is Italy’s relationship with the international technological leader over much of this period, namely the United States. This occurs through trade between the two countries as well as the United States direct investment in Italy. To this must be added the substantial Italian migration to the United States. But Valentina Sgro also demonstrates the importance of the institutions of the chambers of commerce in enhancing the diffusion of new modes of production as well as of management techniques, especially from the United States. Hence, she integrates in a masterly way the role of AmCham and the importance of the United States for Italy’s relative growth over the last hundred years or so. She shows how AmCham played a pivotal role in identifying profitable business opportunities for American and Italian firms in each other’s countries.

Valentina Sgro identifies two types of chambers of commerce. The first, which is typified by those that developed in the UK, were essentially founded and operated by the private sector. Not surprisingly, their aim was to enhance the business interests of their members. They arose without any significant government help or supervision. By way of contrast, in Continental Europe, especially France and Italy, the government played a major role. The chambers of commerce began in the Middle Ages with their own statutes and regulations designed to promote and enhance the interests of their members. They became increasingly powerful, dominating many cities in Italy, before many of their functions came under political control. They continued to grow in importance in the 19th century, with powers to raise their own revenues. By the time of unification in Italy in 1871, “the chambers were conceived as vectors of a restricted economic democracy” (Sgro, p. 7).

AmCham was founded in 1915 and, by 1919, comprised a wide membership of firms ranging from button manufacturers to lawyers. Indeed, it is difficult to think of a narrowly defined industry that was not a member. (See the interesting list of industries documented by Valentina Sgro on pp. 18-27.) AmCham’s statutory aims were to promote both economic and cultural links (broadly defined) between Italy and the United States. It was partly supported by the membership fees of Italian companies, as well as its United States members. Not surprisingly, the vast bulk of Italian firms who were members of AmCham were situated in the more developed north of Italy and this is still true today. American firms with trade interests in Italy were also members of AmCham.

The importance of the links of Italy with the US grew after the First World War. Italy signed the secret Treaty of London in 1915 and entered the war on the side of the triple Entente, which comprised the United Kingdom, France and Russia. It was during the subsequent interwar period that the chambers of commerce and AmCham became of particular importance in Italy, leading to innovations in Italian entrepreneurial activity. Indeed, the focus of attention in Chapter Two of the book considers what is termed the “Americanization of Italy”. In the immediate post First World War period, as Valentina Sgro succinctly puts it; “Joining the American Chamber of Commerce was therefore almost a necessity” (p. 162).

The United States rapidly industrialised from the 1920s with the growth of its Fordist corporations, the rise of Taylorism (or scientific management), and its large internal market. This enabled these American firms to reap the substantial benefits of economies of scale. This was the time of the rise of the big United States corporations. But there were many constraints on Italian firms, including their relative lack of size, which meant that they did not develop apace. It was here that the role of AmCham became increasingly important. It helped with the development of economic relationships between United States and Italian companies, which subsequent events have shown are important in understanding the determinants of growth in both countries. The importance of theses linkages is often difficult to quantify, for example, in neoclassical “growth accounting” terms. Hence, their importance is often overlooked in the standard economic models of economic growth. But Valentina Sgro convincingly shows that they should not be underestimated.

The rise of fascism in Italy in the mid-1920s did not initially have an adverse impact on the economic (and political) relationships with the United States. This was because it was initially considered to bring political stability to Italy. However, the 1930s saw a souring of relations with the United States, especially with the rise of protectionism as a result of the Great Depression. The rise of the Nazi party in Germany and the Italian-German alliance brought increasing tensions between Italy and the US. As Valentina Sgro shows, this is illustrated by AmCham refusing to subscribe to the journals Annals of Fascism and Fascist Militia; a small but telling incident. During the Second World War, AmCham, not surprisingly, closed its doors and was concerned merely with preserving its archives.

The book illustrates how after the Second World War, AmCham regained its importance in enhancing economic links with the United States. The dangers of the excessive reparations that occurred after the First World War with the Treaty of Versailles in 1919 were avoided with the introduction of the United States Marshall Aid plan. This provided the funds to cover the European current account deficits and to facilitate post-war reconstruction of the European countries. This ushered in what has come to be known as the Golden Age, which lasted until1973. During this period, both output and productivity growth rates in Continental Europe, including Italy, reached unprecedented levels.

Chapter Four of the book discusses the period of the great inflations of 1973/4 and 1979, caused by the OPEC cartel oil price rises. There was political turmoil in international relations, including the Vietnam War, and the Golden Age became “leaden”. Valentina Sgro succinctly discusses the causes and consequences of this change. Italy’s exports suffered in the 1970s, but, with the exhaustion of the benefits of Fordism, the Italian small and medium enterprises (SMEs) became a major driving force in Italy’s economic growth. This saw the increased growth of the Italian “industrial districts”, with their important network externalities and also niche products.

The early 1980s saw the introduction of the economic policies of austerity in both the United States and the United Kingdom. These impacted on Italy’s growth, which also saw a period of stagnation at this time (1981-83). As Valentina Sgro notes, in 1979, “This dystonia with the rest of the international economy produced its effects in the following years because the growth of domestic demand greatly stimulated imports that were poorly compensated by exports, generating a deficit in the trade balance that dragged on for many years. Furthermore, the positive cycle was part of a fragile context of high inflation and growing public deficit. The Italian economy, therefore, continued to rest on weak structural foundations” (p.102).

The 1990s saw the beginning of what has been termed in the UK as the NICE (non-inflationary continuous expansion) years. It also saw the formation of what eventually became the EU with its integrated markets, and an increasing trend towards political union. This period saw an increase in the economic links between the US and Italy. AmCham continued to play an influential role in ensuring greater economic cooperation between the US and Italy. Valentina Sgro presents evidence to show that US investment in Italy became of great importance and trade between the two countries flourished. But, as she shows, it is not possible to understand Italy’s growth over the post-war period without reference to the political scene. Italy has what has been termed a “flawed democracy”, where the fragmented nature of the political process has led to political instability. Since the end of the Second World War, Italy has had 61 different governments, which cannot have economic helped growth.

The importance of AmCham is that, over the last hundred years, it has evolved and provided not only important economic advice, but also suggestions on how to strengthen the political and social institutions of Italy. In 2015, AmCham celebrated its century of work in the transmission of ideas and strengthening the social and economic links between Italy and the US, often through its numerous committees. It continues to play an important role as the world moves from Fordism, via deindustrialisation, to the new economy and the so-called fourth industrial revolution. The latter are driven by the information technology revolution and the knowledge economy. But the Global Financial (or Subprime) Crisis, followed by the adverse economic impact of Covid pandemic, shows just how fragile sustained growth can be.

To conclude, A Century of Italian American Economics makes an important contribution not only to our understanding of Italian economic growth, but also to entrepreneurial and business history. It clearly shows the importance of the role of AmCham in leading to the close economic links between Italy and the United States. It reflects very careful scholarship and is a most important study in this area.

John McCombie is Professor of Regional and Applied Economics (Department of Land Economy) at Downing College, University of Cambridge.

A Century of Italian American Economics: The American Chamber of Commerce in Italy (1915-2015) is available now in Hardback at a 25% discount. Enter code PROMO25 at checkout to redeem. eBook available from Google Play.