Home / Book in Focus
Vignettes Relating to Kathakali and Shakespeare

Book in Focus
Vignettes Relating to Kathakali and Shakespeare

The Thirasheela versus the Curtain 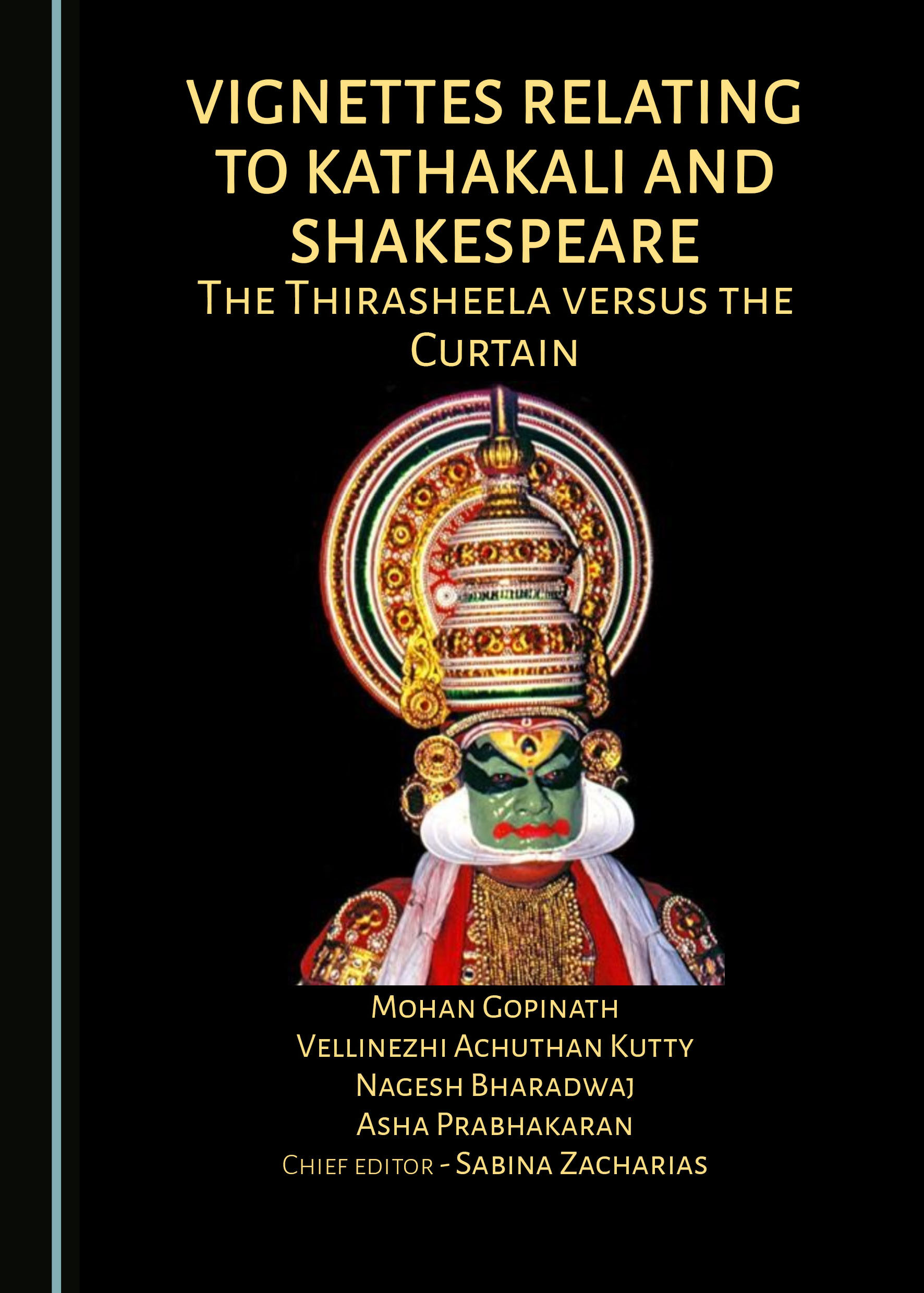 The motivation for writing the book was very straightforward. Apart from our fascination with the Kathakali dance form, we also felt that there are not many books which compare it with other types of drama. Consequently, we have compared the dance form to some of the techniques used by great Shakespearean actors. Again, we felt that we had to comment critically and objectively on the intake of Biblical and Shakespearean and other stories into Kathakali, which is a comparatively modern phenomenon. What exactly is the purpose of this? We also wished to give our views on the way forward for Kathakali to prevent it becoming a slowly dying form of dance drama. It had to move forward while retaining its original character and yet be made popular to the average viewer who may not know too much about it. The great actors Sir Laurence Olivier and Kalamandalam Krishnan Nair provided us with the ideal actors who could be compared in terms of character interpretations. As such, the book is a series of inter-linked vignettes.

Its main objective is to promote global interest in Kathakali by relating it to Shakespearean drama, a genre with which audiences may be more familiar. It is essentially an academic work and written in a style which will make it as widely read as possible. The book is needed as it will help in guiding scholars on the future paths the dance drama will take and make them understand how to make it more popular with audiences. The word ‘thirasheela’ in the subtitle of this book refers to the coloured cloth screen which is held up by two people at either end and masks what is happening on stage before the commencement of the scene. Usually, the slokam (an introduction sung prior to a scene) preceding the main song is sung when the thirasheela is held in place. It is removed once the scene commences. The thirasheela is sometimes referred to incorrectly as a ‘curtain’ by many people when writing about Kathakali. It is not a curtain and never can be. The thiranokku, or visual prelude of a fierce character, which establishes for the audience an inkling of the type of character which they are going to see, again uses the thirasheela and the fiercer the character, the more violent the manipulations of the thirasheela.

We have made a lot of references to Shakespeare in this book. So let us answer the questions, ‘why Shakespeare? Why not any other playwright or author who could also have been brought in?’ For us, the answer is clear-cut and direct, as will be evident from what follows. Shakespeare was able to create wonderful and human characters all nurtured by warfare. This symbiotic link with wars is what binds Shakespeare’s histories with the stories from Kathakali. The two Indian epics from which Kathakali draws the staple of its stories also have their grounding in wars, the battle of Kurukshetra and the epic battle between Shri Raman and Ravanan which in a way is the climax of the Ramayanam. Wars have always held a fascination for us, and this fascination is seen to permeate the two epics and the plays of Shakespeare. It is a fascinating field of study—the study of war. As Margaret Macmillan (2020) argued, ‘war raises fundamental questions about what it is to be human and about the essence of human society. Does war bring out the bestial side of human nature or the best? Is it an indelible part of human society, somehow woven in like an original sin from the time our ancestors first started organizing themselves into social groups? Our mark of Cain, a curse put on us which condemns us to repeated conflict? Or is such a view a dangerous self-fulfilling prophecy? Do changes in society bring new types of war or does war drive change in society?’

In addition, stemming from this, did the war in the Maha Bharatham bring benefits in its wake? If so, who were the beneficiaries and who were the losers? This war is not like the war in the Ramayanam which was a straight battle between good and evil. The war in the Maha Bharatham is more nuanced, but this is not the place for philosophical arguments on the good and evil of war; rather, the point being made is that wars have always been the stuff of legends, and legends have been the basis of many a play and dance drama, and plays and dance dramas have always been of interest to people. Thus, the point being made here is basically that the histories also have a close link with the stories in Kathakali; the ever-present wars are an example of the link between the two genres

The book covers both academic angles and practical insights into the way Kathakali is presented on stage. This means that it discusses the individual actors in terms of how they interpret characters, leading to getting ‘into’ the character, and, at a broader level, the story itself. The book is essentially an academic book which is also targeted at the general reader who follows the developments in the field of the performing arts.

There are people who are fond of Kathakali (both in India and outside), but find it difficult to understand or come across a book which will cater to their expectations. This book will, therefore, be of interest to all people keen on developing their understanding of the performing art, as well as anyone who is being trained to come into the field of Kathakali as a professionals. As such, the catchment area of the book will be wide as it will also be of interest to actors in both the west and the east.

The book also specifically addresses the fusion of opera and Shakespeare and the experiments now being done through the medium of Kathakali of converting Shakespeare plays into the former genre. In short, it is the only existing text to address both Kathakali and Shakespeare simultaneously. The western reader interested in Shakespeare will gain a new perspective on the playwright by seeing his work set against a classical Indian dance form, while those interested in Kathakali will gain a new perspective on their actors' portrayal of characters by seeing how Shakespearean actors set about the same task.

It shows how Kathakali is to be viewed from a much wider and three dimensional perspective. For example, it discusses in detail how training is of importance as it is the foundation on which the actor has to ‘build’ the interpretation of a character; it depends on the intelligence and creativity of the actor to clothe the character in all its complex nuances, and also build on what their predecessors have done in this area. The same applies to actors in Shakespearean drama, and we have also covered this point in detail in the book.

As far as the methodology for writing this book is concerned, we have mainly used the following techniques:

This book is aimed at sparking the interest of the reader who is not too familiar with the Kathakali dance form but is keen to know more. It is primarily an academic work, but can be read with equal felicity by non-academicians. It also adds new knowledge to the field by bringing in a dual perspective, and will clearly show the reader the complexities of the characters in the dance drama which are comparable to the intriguing creations of Shakespeare.

Dr Mohan Gopinath holds a Master’s degree in English Literature from St. Stephen’s College of Delhi University, which he later joined as a member of the faculty. He obtained a doctoral degree from Osmania University, India. His publications include Business Drama: How Shakespearean Insights Help Leaders Manage Volatile Contexts and The Actor Who Could Connect: The Genius of Kalamandalam Krishnan Nair.

Vellinezhi Achuthan Kutty completed his education at NSS College, India, and Government Victoria College, Palakkad, India, and went on to work in the Bhabha Atomic Research Centre, India,and at the Directorate General of Civil Aviation and Meteorology in the Sultanate of Oman. He is currently the Director of the Thantra Academy of Behavioural and Allied Sciences and President of Vellinezhi Nanu Nair Smaraka Kalakendram in Kerala.

Nagesh Bharadwaj holds an MBA from the University of Oklahoma, USA. He worked at Union Pacific Railroad Company and Sony for more than 10 years, and his research interests include the impact of art on life.

Asha Prabhakaran holds an MBA degree from the University of Madras, India, and is pursuing a doctoral degree at Anna University, India.

Dr Sabina Zacharias has been teaching English Language and Literature, Cultural Studies, Business Communication and Legal English to multicultural and multi-lingual groups at different levels in India and abroad for the last 15 years. She completed her doctoral degree at the English and Foreign Languages University in Hyderabad, India. Currently, she is an Adjunct Faculty teaching Communication and coordinating training courses in English Language and Soft Skills at various B- Schools in Bangalore.

Vignettes Relating to Kathakali and Shakespeare: The Thirasheela versus the Curtain is available now in Hardback at a 25% discount. Enter code PROMO25 at checkout to redeem.