Zen and Artificial Intelligence, and Other Philosophical Musings by a Student of Zen Buddhism 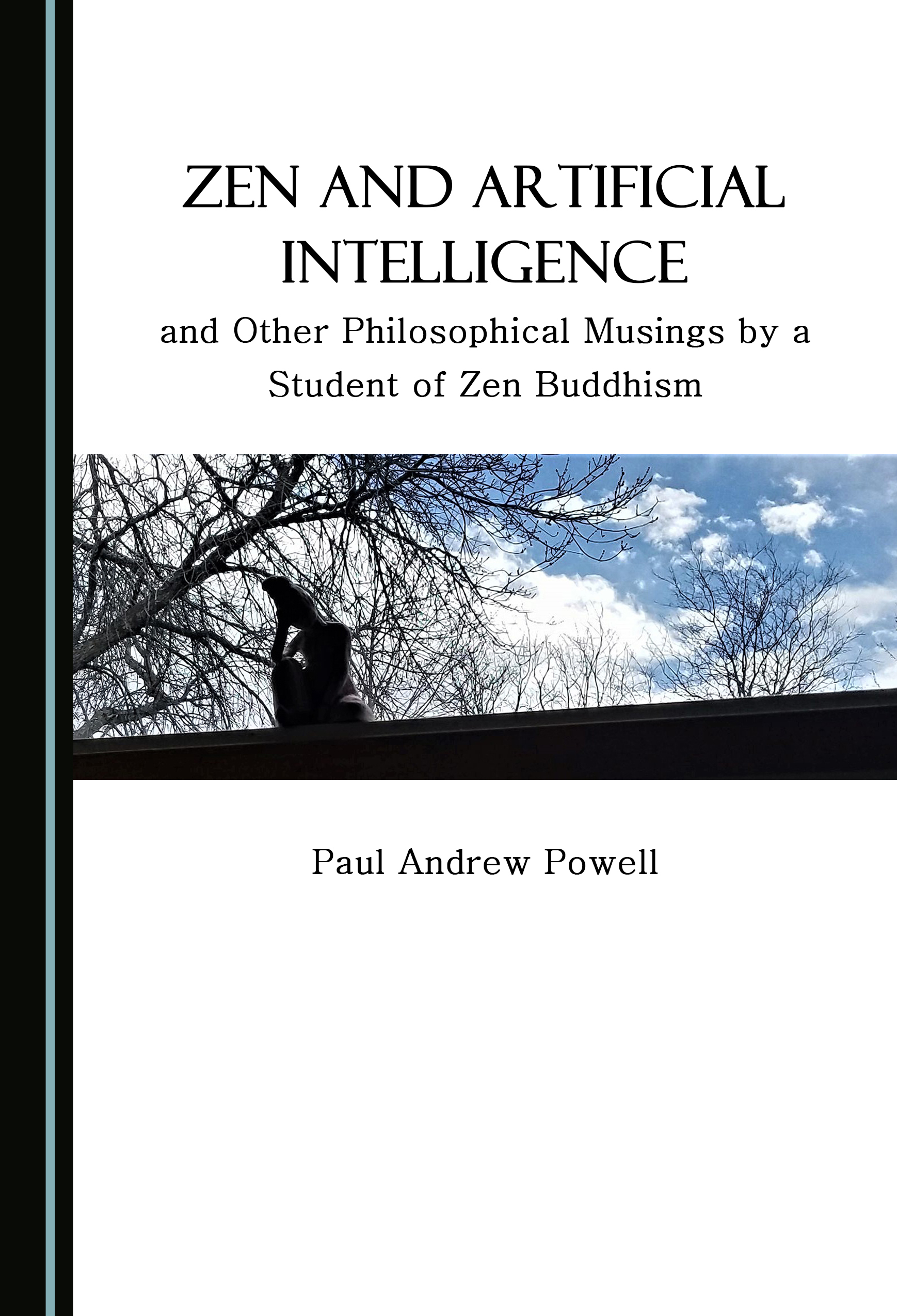 Philosophical Musings on Zen and Our Secular World

My new book, Zen and Artificial Intelligence and Other Philosophical Musings by a Student of Zen Buddhism, is an anthology of six, first-person, scholarly essays based on personal insights from my study and practice of Zen Buddhism. There are countless books on how to meditate, Zen wisdom, loving kindness, etc. This is not one of them. Instead, I explore, in these essays, how the living Buddha Dharma is an unrecognized subtext running throughout the entire story of the Secular West.

The story of the modern, Secular West is arguably as much, and, in important ways, possibly more, Buddhist than Christian. The three essays in Section One consider aspects of the Secular West (technology, a work of literature, and academic pedagogy) through the lens of my study and practice of Zen. The three essays in Section Two explore phenomena, traditionally perceived as supernatural, or inexplicable, such as the after-life, free will, the nature of consciousness, and the existence of God. They offer highly speculative yet, I think, plausible explanations for these supernatural or inexplicable phenomena based on Complexity Science and Semiotics—explanations that do not necessarily conflict with Zen Buddhist teachings, and that may even affirm them.

In this sense, my approach to Zen in this book is similar to secular Buddhists’ efforts to make relevant the Buddha’s insights to the challenges and issues of our contemporary society.

I purposefully use the phrase student of Zen throughout the book to avoid mistaken assumptions that I am in any position to be offering spiritual advice or insights (though as you will see, I can’t help myself from time to time. Take it or leave it, please). Yes, I meditate, and I also practice T’ai chi. However, my approach in this anthology is more philosophical and intellectual, more as a student of Zen and as a student by nature, than as any enlightened sage teaching Zen wisdom. Any number of family, friends and acquaintances will tell you that I am no wise man! I have been and remain “human, all too human”.

These are the questions I explore, along with many others they inspire, in the following essays:

Can a near-death experience attain eternity in subjective brain-time?

Is consciousness a function of global, neurophysiological information funneled into linearity by self-referencing language?

Can a machine attain consciousness and even enlightenment?

Is J.R.R. Tolkien’s most famous bad-guy, Sauron, a trope for the human ego?

Would not the current postmodern condition more accurately be termed “the Age of Novelty”?

How can there be a moral self in a determined world?

Zen and Artificial Intelligence explores the possibility of machine consciousness, but further asks, should a machine become conscious, could it then become enlightened? Taking a moment to think about the creation of artificial enlightenment, the paradox becomes clear. In order to manufacture enlightenment, we must as well manufacture samsara, since, for a Buddhist, enlightenment is the event of deconstructing the problematic nature of self within its mutually arising samsaric environment. We first look at the nuts-and-bolts problem of creating a self from metaphor and then move on to speculate on the “hard problem” of creating a machine that not only responds to our voice, but actually hears it. My Zen practice offers a not so sanguine view of the prospects.

Hobbits as Buddhists and an Eye for an “I” asks the question: Is there any Zen Buddhism in The Lord of the Rings? One observation a Buddhist might make here is that Sauron’s solitary eye could be interpreted as a trope for the pronoun I, that is, the highly problematic human ego. In addition, Tolkien’s story, as with Zen, suggests that a world liberated from this I would be a healthier and more enlightened world. My reading is that the highly influential God of the Old Testament is a morbid deification of the human ego. Sauron, in turn, is a stand-in for this abstract God of rules and rage, who Tolkien deconstructs within the narrative of an ambitious new mythology. Instructively, and like the Fellowship, Buddhists understand that human suffering possesses an underlying and vulnerable source, which can be overcome in human terms. This vulnerable source of suffering is the human I.

Infinite Games in the Age of Novelty: Although a bit dry in setting up the issue, the essay relaxes into broad exploration of the academe’s role and responsibilities in “situating” (or, as we suggest, “de-situating”) the student into the academy. It uses Zen Buddhism as a frame, and grounds, for de-situating; introduces philosopher James P. Carse’s notion of the “infinite game” as reason for this; and suggests that within academia, the Humanities and the Arts offer environments for de-situating. Finally, it asserts that our current era should be called “the Age of Novelty”. This era manifests the growing novelty emerging from our present, globally indefinite condition.

What Dreams May Come: Eternal Near-Death Experience in Subjective Time and Its Implications for Christian and Buddhist Metaphysics: The central assertion here is that a dying brain creates a fully sentient, lucid hallucination experienced for eternity in subjective brain-time. This claim is based on the following research and speculations: 1) A stress response in the dying brain floods it with nearly infinite nonlinear information; 2) Within a near-death experience, a self-aware, rational, and creative agent’s capacity for processing information linearly is limited at 40 +/- bits/s[ec]; 3) When the spreading depolarization is radically conflated by the self-aware agent’s linear processing capacity, it undergoes an informational phase-transition expressed in subjective consciousness as extreme time dilation in a fully sentient hallucination; 4) Based on the above, the essay goes on to suggest implications for Buddhist and Monotheist metaphysics.

Zen, Free Will, and the Authentic Moral (Non)Self tackles the tricky issue of free will and morality. At one time (and still in many cultures today), the natural world was perceived as being filled with spirits. A violent thunderstorm moves in and the mind projects agency onto the storm: Storm God is angry and demands a sacrifice! Perhaps, someday, ages hence, sophisticated people will look back, bemused, at how we primitive types attributed agency to ourselves, and to each other! We project agency onto human behavior, which is also nothing more than staggeringly complex biological and mental processes. Moral chaos? These are the concerns of the ego stuck in samsara. There is one act of free will—but only one. It represents the only authentic act of autonomy we have: the choice to be awake, or to be asleep in discursive, conditioned ignorance.

An Attractive God: Eastern religions assert various descriptions of the Veil of Maya: the cosmic illusion that the phenomenal world is real. This is radical philosophical Idealism. As a Buddhist myself, and based on my own practice, I accept this Idealism. Therefore, in keeping with the general idea behind these essays—that is, trying to make sense of Eastern Idealisms from various aspects of Western Materialism, and vice versa—my curious, rational side that wonders not Why? but How? has developed a theory on the so-called “Hard Problem” of consciousness. Just as ice, water, and steam are all of the same molecules in phase transition, the Logos, sentience, and time are all of the same neurophysiological information in phase transition, where the Logos, as an attractor (as described in Self Organized Systems Theory, and as non-self in Zen), functions as the organizing principle.

Lastly, the first three essays in this volume were peer-reviewed for their respective, original publications and are fairly straightforward academic journal-style pieces. However, I feel I should comment on the essays in Section Two of this book, which offer unconventional ideas on such subjects as the afterlife, free will, and the nature of consciousness. My intuition tells me that these essays represent messages from another region, one unknown even to myself. These messages can be surprising, maybe important, as well as amusing and eccentric. They are often incomplete and unsupported, clearly beyond the limits of academic philosophy and short of enlightened wisdom—perhaps amounting to nothing more than the jittery scribblings of an over-caffeinated Buddhist![1] They may be better science fiction than science, but science really wasn’t the point. To me, they represent an odd species of creative writing that defies category. Their purpose is not so much to persuade as generate; like art, which, by my own definition, is that which reveals something of ourselves in the gap between doubt and wonder.

No text is a fixed entity; rather, it is a living catalyst for creative response. The value of this text will be determined by its ability to create open, local structures of relative, yet functional meaning. As such, this text, in a sense, is a tool: a vessel that carries the seed of its own potential—its value: its capacity as an open system for evolving ways of knowing within ever-changing environments both material and symbolic. In the words of one of my favorite philosophers, James P. Carse, the meaning of the text is what happens “because it was spoken”

[1] Thank you The Frantic Meerkat!

“There is so much more that could be said about this stimulating book but I will leave it there. If you like to explore contemporary cultural issues in contemporary language, but would appreciate the flavour of Zen and non-duality, instead of the sometimes turgid refractions of standard post-modern theory, then this is a book for you.”
Urthona, a Journal of Buddhism and Arts

“An engaging cauldron of ideas.”
Kurt Borchard, PhD
Author, The Word on the Street and Homeless in Las Vegas

Paul Andrew Powell is a retired college instructor of Composition and Literature. His essays “Hobbits as Buddhists and an Eye for an ‘I’” (2011) and “On the Conceivability of Artificially Created Enlightenment” (2005) appeared in the journal Buddhist/Christian Studies, and his essay “Infinite Games in the Age of Novelty” appeared as Chapter 26 in Consciousness in Theatre, Literature, and the Arts. He presented his essay “Infinite Games in the Age of Novelty” at the Consciousness in the Arts Conference in Aberystwyth, Wales, in 2007, and his paper “Zen and Artificial Intelligence” at the Toward a Science of Consciousness Conference in Tucson, Arizona, in 2002. He has been a student of Eastern thought and Zen Buddhism, in particular, for over four decades.

Zen and Artificial Intelligence, and Other Philosophical Musings by a Student of Zen Buddhism is available now in Paperback at a 25% discount. Enter PROMO25 at the checkout to redeem.