The Poems and Aphorisms of Maurice Chapelan 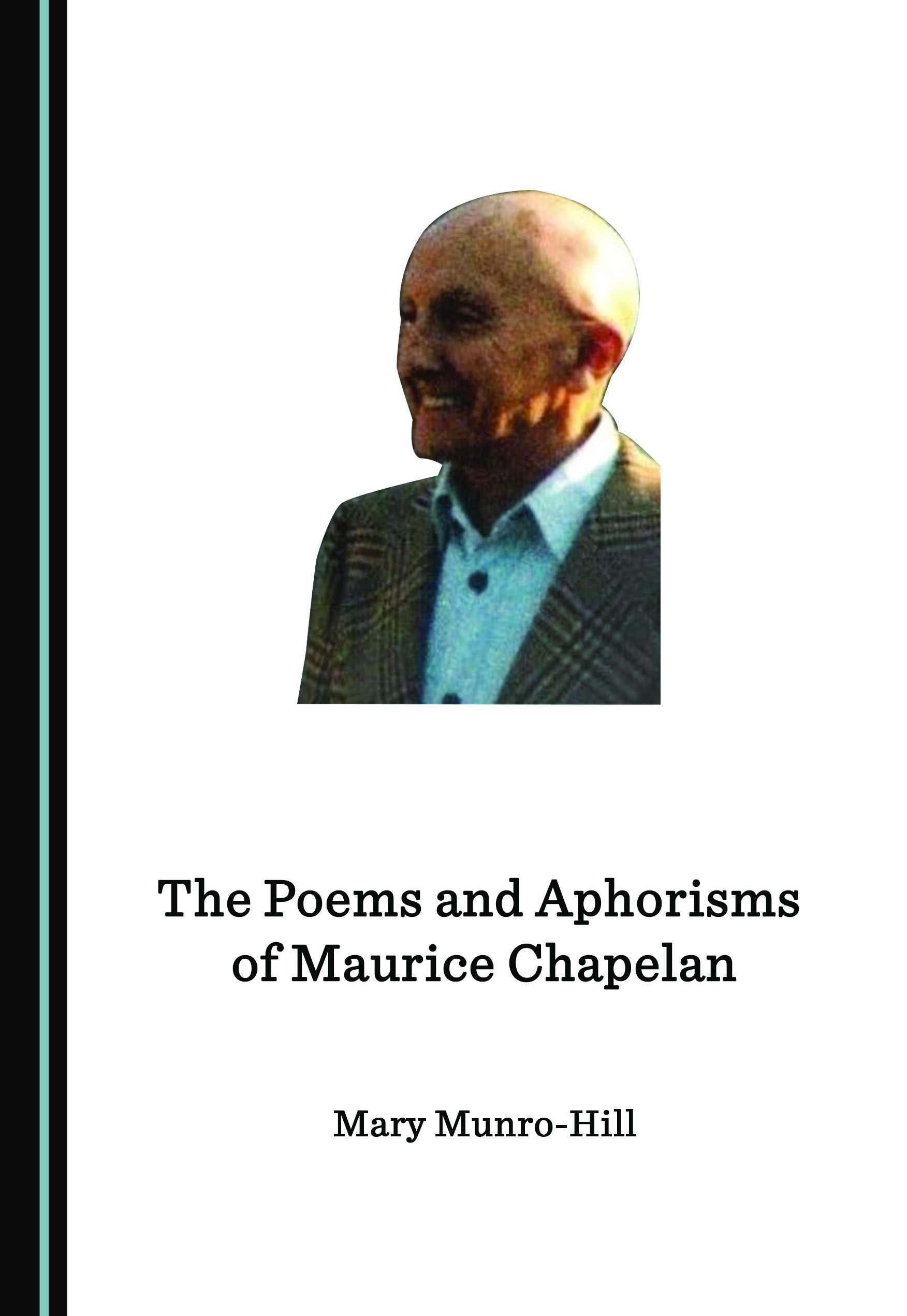 I have always loved languages, my own and those I have acquired, both modern and classical, especially French. As an instinctive communicator—teacher, preacher, and musician—I have been interested above all in speech, grammar, and usage, thus tending to concentrate on the linguistic rather than the literary. It is thanks to my intensive study of Maurice Chapelan (1906-1992) that I have gradually become better balanced in my outlook. Although it was his chroniques du langage/chroniques de langue in Le Figaro that first caught my attention in the early 1960s, as they were both grammatically informative and rich in humour, I have since read with appreciation all of his literary output from the 1930s to shortly before his death in 1992.

Since 2017, I have published four books with Cambridge Scholars, the academic publishing house first recommended to me by a good friend, Dr David Noy, who had published a superb biography here in 2016 (Dr Johnson's Friend and Robert Adam's Client Topham Beauclerk).

From the beginning, I was impressed by the professionalism and efficiency of the Cambridge Scholars staff, who rightly expect equally high standards from their authors. I have been delighted with my books, and am proud of their appearance.

My first book, Aristide of Le Figaro, which was published in spring 2017, was a revised and updated version of my 1994 PhD thesis (“Aristide and the chroniques du langage in the French press”). The publication was timed to mark the 25th anniversary of the death of Maurice Chapelan (Aristide), whom I had had the pleasure of meeting many times between 1986 and 1992. During the final months of my earlier MA thesis on him, “Aristide of Le Figaro” (1986), I wrote to Chapelan, asking if I might visit him. In the summer of 1986, I had the pleasure of meeting him for the first time and presenting him with a bound copy of that thesis. He was surprised and delighted that someone in England had wished to make an academic study of his language articles: he was a modest man. I am so sorry that he did not live to read my doctoral thesis.

Having published Aristide of Le Figaro in 2017, I decided to write a similar volume on Claude Duneton, who had succeeded Aristide as resident chroniqueur du langage at Le Figaro. I had first visited him in Paris in 1994, when I had given him a copy of my PhD thesis, the second part of which contained an enormous selection of Aristide’s chroniques, which he appreciated. As I had kept copies of Claude’s language articles from 1994 to 2010, I had built up a substantial corpus on which to base my book. Unfortunately, in 2010, Duneton suffered a tragic, completely disabling stroke, after which he could neither speak nor write. He died in 2012. Of all his writing—and there was much—it was his chroniques that he enjoyed the most. My Claude Duneton, Chroniqueur at Le Figaro, appeared in 2018, to the delight of his family.

Maurice Chapelan, like Claude Duneton, was far more than a chroniqueur du langage: he was first and foremost a literary critic, employed as such by Le Figaro in 1947; it was not until 1961 that he was appointed resident grammarian as well. He had published a number of seminal works on the history of the journal intime and on Sainte-Beuve, as well as novels and collections of aphorisms and poems. Having known Maurice Chapelan well, I wished to write something about the three distinct personae of this versatile writer. The result was my 2019 book, Maurice Aristide Chapelan, Man of Three Parts (his three identities being Maurice Chapelan, Aristide, and Aymé Dubois-Jolly). This book was a critical appreciation of someone for whom style was of supreme importance throughout the whole of his work.

Once I had completed that book, I realised that something more needed to be said about his poetry and his philosophy, as expressed in his aphorisms. Thus, my fourth book with Cambridge Scholars was born: The Poems and Aphorisms of Maurice Chapelan, which appeared in 2020. Of course, I could not leave matters there, however...

I am currently working on a critique of Chapelan’s libertine novels, written under his pseudonym, Aymé Dubois-Jolly. In his youth, he had read most of the books in his grandfather’s vast library of eighteenth-century works of literature, including those of Diderot, Crébillon fils, Laclos and Sade, who would inspire his four highly entertaining romans galants.

Praise for The Poems and Aphorisms of Maurice Chapelan

“Through her judicious study of the various works of Maurice Chapelan, Mary Munro-Hill has painted an authentic portrait not only of the writer but of the man. She reveals the poet’s sensitive side, which no critic identified during Chapelan’s lifetime. She also shows us clearly the entirety of his life’s labour in all its diverse genres, each of which is composed with the same great talent: poems, essays, diaries, aphorisms, novels, or literary articles in the press. Always and everywhere he is anxious to produce writing of stylistic perfection, to match the quality of his sensitivity and thought. Mary Munro-Hill succeeds in showing the many aspects of this sensitivity and thought, whether Chapelan is writing as a grammarian, as a philosopher, or as a racy poet—dare I say romantic—or penning erotic novels or literary criticism. What she tells us is that this timeless writer, in common with the Giants of the eighteenth century, whom he so admired, defies all classification and may thus belong as much to the future as to the present.”

Mary Munro-Hill holds BA degrees in French and Latin, as well as an MA and a PhD in French. She also holds a BD and an MTh in Theology. Her career has been spent principally in teaching languages and theology in universities, colleges and schools. In retirement she has served as a Chaplain at the University of Hull, where she was a Visiting Tutor in French Language from 1995 to 2017. She is now an Honorary Fellow in the School of Histories, Languages and Cultures at this same institution. Dr Munro-Hill is a long-serving lay minister in the Church of England (Reader) and holds the Archbishops’ Award in Church Music of the Guild of Church Musicians.

All four of Mary Munro-Hill's titles, including The Poems and Aphorisms of Maurice Chapelan, are available now at a 25% promotional discount. Enter the code PROMO25 at the checkout to redeem.

A fifth work, provisionally entitled Aymé Dubois-Jolly: Love and Laughter, was recently accepted for publication by CSP, and is expected to be published later in 2021.