The Making of Geography as a Secondary School Subject

A Perspective from Australia 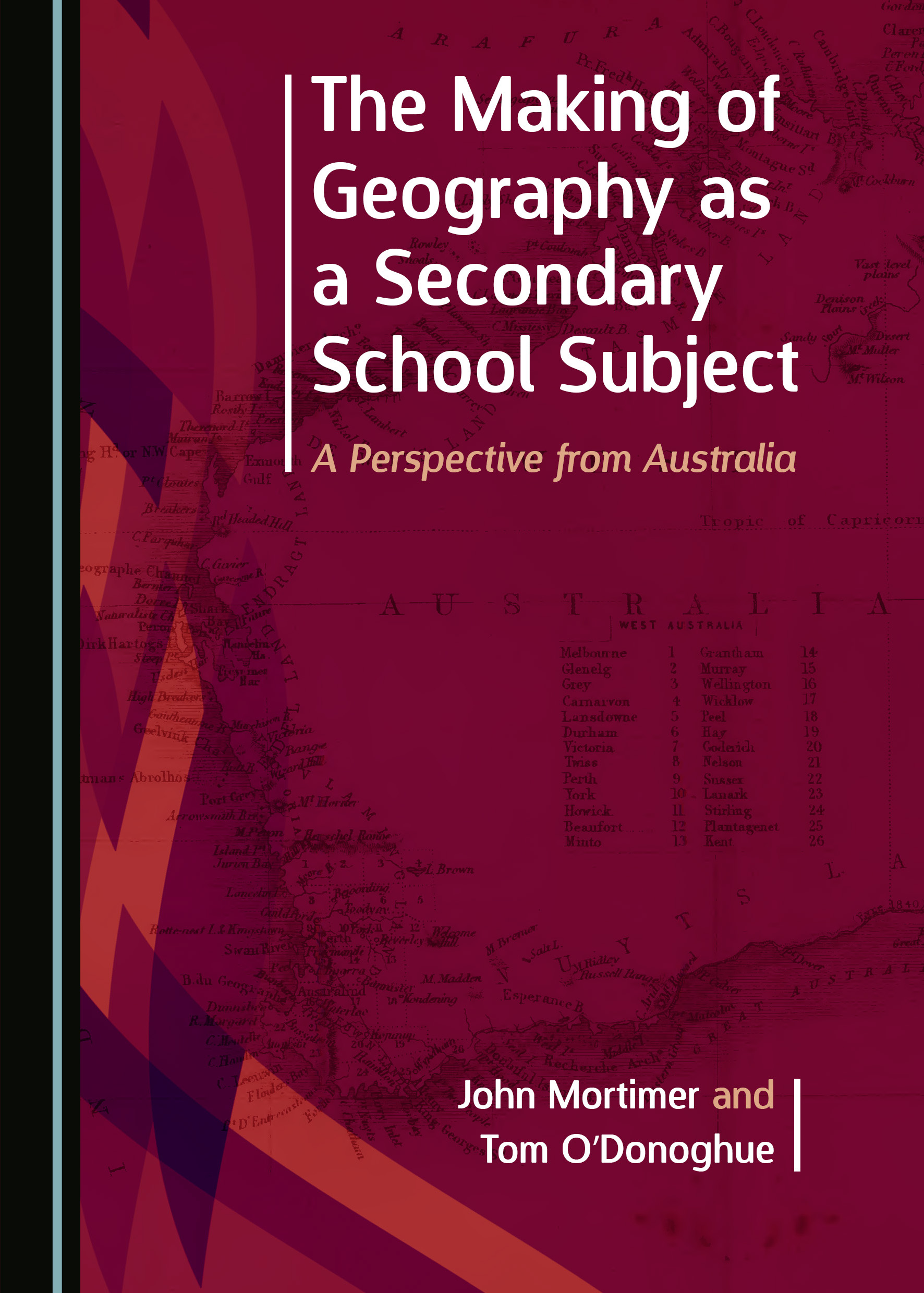 By John Mortimer and Tom O'Donoghue

Why did you write this book?

The Making of Geography as a Secondary School Subject: A Perspective from Australia provides the first comprehensive study of the senior secondary school geography curricula in Western Australia for the period 1917-1997. The stimulus for conceptualising our book arose from cogitating general patterns within the development of geography as a subject for senior secondary schools internationally, as discerned by various scholars. We also noted that a detailed study of nuances, variations and possible deviations from these patterns within the various education jurisdictions and for various age levels in Australia had not been undertaken.

The research for the book was also stimulated by Ivor Goodson’s argument that the school subject is a seriously under-investigated form of rigorous historical inquiry on the school curriculum. Our book is a response to that deficit, with the specific aim of developing an understanding of how, historically, geography was constructed as a subject for students in the senior secondary years in Western Australian government schools from 1917 to 1997. We identified four different constructions of geography as a subject that emerged over the period studied. These gave us the following four sub-periods: 1917 to 1944, 1945 to 1957, 1958 to 1974, and 1975 to 1997, in which to investigate.

A brief description of the theoretical framework of the book:

The theoretical framework underpinning our study was based on the pioneering work of Ivor Goodson on the history of school subjects. That framework rejects the view of the written curriculum ‘as a neutral given embedded in an otherwise meaningful complex situation’. Rather, it views curriculum ‘as a social artefact, conceived of and made for deliberate human purposes.’ As such, curricula can be seen to consist of continually changing bodies of knowledge, skills and beliefs reflecting diverse interests of sub-groups and alliances that shift frequently over time. Moreover, as Goodson also claimed, the various interest groups are often in pursuit of an array of conflicting professional, ideological and political goals.

The focus in each of the sub-periods was on three main research questions: what were the background developments that influenced the process of constructing what came to be the dominant approach to the subject? What was the construction of the subject in the sense of ‘construction as product’, particularly in terms of the stated aims, content and assessment approaches? What were the issues, conflicts and compromises that arose following the introduction of the subject for senior secondary schooling in each sub-period? Further, the emphasis of this investigation was on the ‘pre-active curriculum’ as represented in the officially prescribed syllabi in order to increase understanding of the influences and interests functioning at that level.

Three hypotheses were generated to guide the pursuance of answers to these research questions in the initial stages of the study, namely:

How has your book been organised?

The first chapter includes a broad outline of the historical development of geography, internationally, as a subject from ancient times. It continues through the establishment of geography as a ‘modern science’ between 1750 and 1850 by the work of the two ‘great masters’ of the classical geography period, namely Alexander von Humboldt (1769-1859) and Carl Ritter (1779-1859) to further developments in the 20th century to the present. The existing corpora of research on curriculum generally, and on the development of geography as a school subject in particular, are then surveyed. It is noted that school geography predated the establishment of the university-based discipline.

Inside the book, the developments in the four sub-periods are considered in Chapters Three, Four, Five and Six. For each sub-period, the general international, national and local contexts are outlined first. Then the progresses in general schooling and curricula, as well as developments in geography, are discussed before the book moves on to explore aspects of the construction of the Western Australian geography curriculum. A detailed analysis of the examination questions follows, after which an analysis of the spatial characteristics of textbooks and school atlases used at the time is presented. The final chapter presents a synthesis of the analyses outlined in the preceding four chapters. It does so by addressing the three hypotheses in relation to the extent to which they were upheld for the senior secondary school geography curriculum in Western Australia for each of the sub-periods considered within the period 1917 to 1997.

In what ways did you analyse relevant documents?

The analysis of the geography examination questions was extended by the application of Bloom’s taxonomy of educational objectives in the cognitive domain. The questions in the selected examination papers were examined in relation to the verbs in the cognitive domain associated with each objective to describe the complexity of thinking behaviour required to answer a question.

Other scholars have noted that examiners require candidates to demonstrate skills, knowledge and understanding and the ability to apply them. These requirements, or ‘demands’, they argue, relate to the dimensions of complexity, resources, abstractness and strategy. A ‘scale of cognitive demand’, known as a ‘CRAS Scale’, which had been developed in England, was adopted for the analysis of the Western Australian geography examination questions. These were further investigated by analysing the types of question structuring used in the papers during each sub-period.

Textbooks and school atlases prescribed in the geography syllabi for the Western Australian senior secondary school curriculum were analysed and provided further insights. The spatial characteristics of the textbooks were scrutinised to compare the amount of space given to text and both illustrative and activity material (questions and exercises) on each page. The results were presented in a summary table for each textbook and atlas considered.

How would you summarise the key findings?

The results of the study are considered in relation to three hypotheses. The first states that “curricula, both ‘whole curricula’ and ‘subject specific curricula’, including in relation to geography in Western Australia, have been influenced by international trends, nation-wide developments and State developments”. It was deemed to be largely upheld, though not totally, for senior secondary school geography in the State for the overall period studied. The second hypothesis holds that “the subject geography was a field rather than a form of knowledge with shifting sets of sub-groups all pursuing different objectives and that in that process, school geography lagged behind academic geography”. Regarding school geography in Western Australia, the hypothesis was upheld in relation to each sub-period studied. The third hypothesis states that “historically the role of the teacher of geography in Western Australia, and growth in the quality of education, moved through Beeby’s four key stages: the ‘Dame School Stage’, the ‘Stage of Formalism’, the ‘Stage of Transition’ and the ‘Stage of Meaning’. The hypothesis was not upheld in relation to the first stage in the model, namely, the Dame School Stage. That was because, by 1917, schooling in the State had already progressed to the next stage. Overall, however, it was upheld in relation to the other stages.

What is the significance of the book?

No other book explains how, historically, geography was constructed as a subject for students in the senior years in Western Australian government secondary schools from 1917 to 1997. Our book also contributes to the existing body of international research on the history of curriculum and particularly the history of geography as a subject. Further, it provides a framework for investigating the construction of school geography curricula in other constituencies, and could be adopted as a model for engaging in further research in curriculum history for other school subjects both in Australia and internationally. Our book will be valuable for researchers of geography curriculum development in other countries as they will be able to make comparisons and contrasts with their own situation and locate it within a global context.

John Mortimer graduated from Claremont Teachers’ College in Perth, Western Australia, as a primary school teacher in 1966. Several years later, he transferred to teaching secondary school geography. His qualifications include an MEdAdmin from Curtin University, Australia, and an EdD and a PhD both from The University of Western Australia. In 2006, he retired as Principal of State senior high schools in Western Australia, and accepted positions in the United Arab Emirates as Principal of the Fujairah Campus of the Institute of Applied Technology and later as Head of Career and Technical Education in the Knowledge and Human Development Authority, Dubai.

Tom O’Donoghue is Full Professor in the Graduate School of Education at The University of Western Australia. He is also an elected member of both the Academy of the Social Sciences in Australia and the Royal Historical Society, UK. He specialises in the social history of education.

The Making of Geography as a Secondary School Subject: A Perspective from Australia is available now in hradback at a 25% disocunt. Enter PROMO25 at the checkout to redeem.