The Gladiators vs. Spartacus 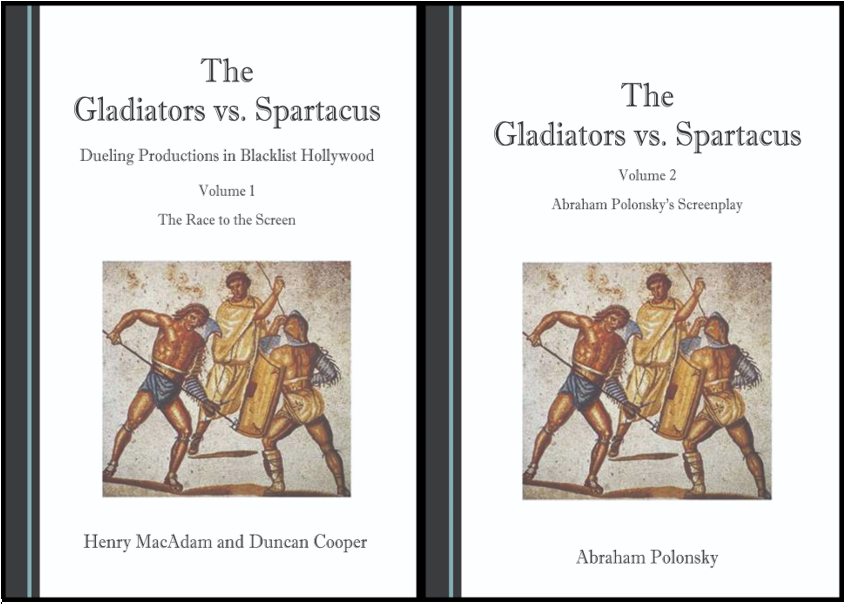 By Henry MacAdam and Duncan Cooper with Fiona Radford

In 1947, the House Un-American Activities Committee (HUAC) began an investigation into communist activities among writers working in Hollywood and the wider US motion picture industry. The investigations, in addition to pressure exerted on film industry leaders, eventually led to the formation of the Hollywood blacklist, wherein anyone suspected of subversive activities would be blocked from gaining employment with film studios.

The beginning of the end for the blacklist was effectively signalled when Dalton Trumbo was credited as screenwriter for Stanley Kubrick’s 1960 film Spartacus. The iconic film, which told the story of a slave uprising adapted from a novel written by Howard Fast, an openly communist author, was a fitting way to draw the blacklist to a close.

However, a rival project was underway which was also aiming to bring the Spartacus story to the screen. Entitled The Gladiators, the film would have starred Yul Brynner (who was also serving as executive producer) with a script by blacklisted screenwriter Abraham Polonsky. However, the film was destined to finish second to Spartacus, and was ultimately never produced.

In Volume 1 of The Gladiators vs. Spartacus, Henry MacAdam and Duncan Cooper detail this ‘Race to the Screen’. Using previously unpublished correspondence and personal journal entries from Abraham Polonsky, neglected notices in Variety and other Hollywood trade publications, and a variety of published sources, this narrative backstory of rival movie productions of The Gladiators vs Spartacus documents that intense competition with greater precision and clarity than any other existing account.

Volume 2 presents Polonsky’s unproduced screenplay. Previously thought lost, the screenplay is published in full for the first time with annotations and critical commentary by film history scholar Fiona Radford. Together the two volumes shed captivating light on one of the untold stories of the Hollywood blacklist.

In this edition of Book in Focus, co-editor Duncan Cooper details the painstaking research process that he and Henry MacAdam undertook to bring the project to fruition, and the fascinating insights revealed therein.

The Gladiators vs. Spartacus

After viewing Spartacus a year following its release in 1960, and later reading the Howard Fast novel on which it was based, I developed a lifelong research interest in both the actual history of this Roman slave rebellion, its accomplishments and actual chances of success, and the politically motivated censorship of the film by Universal Studios, particularly of the battle scenes depicting the slave army’s victories over the Romans. I published my first article on the film in Cineaste Film Quarterly in 1975. In 1990-91, I participated in the restoration of Spartacus by sending the restorationists multiple reports on what I was finding in the Kirk Douglas and Dalton Trumbo papers concerning the “lost battle scenes of Spartacus.” I then published two major articles and later a long letter to the editor in Cineaste on the restoration, the first of them titled “Who Killed Spartacus?” In the years that followed, I gave a number of talks at George Mason University and the National Gallery on the film and later on Kirk Douglas’ 2012 memoir of its production, I Am Spartacus.

About the time of the publication of Douglas’ memoir, I was approached by Henry MacAdam, who was seeking help with several articles he was writing concerning how the production of Spartacus enabled Dalton Trumbo to break the blacklist. Under MacAdam’s guidance, I composed a timeline of Dalton Trumbo’s campaign to break the blacklist between 1958 and 1963, and uploaded it to the academia.edu website. With his help, I revised and enhanced my own lengthy essay on the final campaign and final battle of the Spartacus War, and placed a series of versions of it on that same website.

During this period, I learned of MacAdam’s lifelong interest in Koestler’s novel, The Gladiators, and of his discovery of Abe Polonsky’s heretofore lost screenplay for a film based on it. I eagerly read the Polonsky script written for that unmade film. Like the Koestler novel, it attempted to provide a more realistic historical explanation for why Spartacus’ revolt was finally defeated than Fast’s book or the film based upon it. Though more of a fan of them, I understood MacAdam’s passion to publish this lost script and the backstory of how The Gladiators had indeed almost made it before the cameras on several occasions during or after the production of Spartacus. I became fascinated by the subject, and was determined to learn whether in fact the picture had been the victim of foul play rather than just the hesitancy or waning interest of its star and executive producer, Yul Brynner.

Together, MacAdam and I delved through the online archives of Variety and the New York Times for clues and signposts to the progress and survival of The Gladiators project. Our collaborator, Fiona Radford, transcribed the entire rediscovered Polonsky screenplay, and created a detailed and enlightening commentary which is the highlight of Volume 2. I also became MacAdam’s partner in analyzing the implications of what we found in the archives regarding the intentions and actions of the key players: Brynner, Arthur Krim, head of United Artists, Martin Ritt, the film’s director, Paul Radin, its producer and driving force behind the effort to make it, and Abe Polonsky, the author of several extant drafts of the script. We also examined the activities of a host of other players, including Twentieth Century Fox producer Jerry Wald and Kirk Douglas’ agent, MCA head and then defacto Universal CEO Lew Wasserman, whose actions or lack thereof directly impacted the fate of both productions. Many of my thoughts found their way into a series of endless emails between the two of us, some of which became paragraphs in this book when MacAdam sat down to write and revise it. At that point, it became clear to both of us that the narrative backstory that emerges in Volume 1 is very much a joint endeavour.

We ultimately learned how the effort to film The Gladiators had lasted years longer than Kirk Douglas admitted in his two accounts of the making of Spartacus, and how outside intervention by another studio had frustrated a later effort just as pre-production of the picture moved into high gear. However, in the end, we concluded that the indefinite postponement and ultimate cancellation of The Gladiators production was probably the price that had to be paid by Arthur Krim to Lew Wasserman to ensure that Universal would announce that Dalton Trumbo had written Spartacus and then finally award him screen credit, and that the picture would then succeed at the box office, thus breaking the blacklist.

Duncan Cooper has been a published film historian since 1975, and, in 1990-91, he participated in the restoration of Spartacus. He is the author of a half dozen articles about the production of Spartacus (including its censorship by Universal Studios), and on the historical events upon which it is based. He is currently completing an article on an alternative chronology of the Third Servile (Spartacus) War.

Fiona Radford earned a doctorate in Ancient History at Macquarie University, Australia, with a thesis titled “The Many Legends of Spartacus: The Production History of a Film”. While at Macquarie, she taught as Lecturer/Tutor of History on Film, as well as Ancient Greece and Rome on Screen. She is a contributor to the volumes Stanley Kubrick: New Perspectives (2015) and A Companion to Ancient Greece and Rome on Screen (2017). She currently teaches History at the Queenwood Girls School in Sydney, Australia.

Abraham Polonsky was born in New York City in 1910. He served in WWII with the American OSS in occupied France, and then worked in Hollywood before and after the blacklist. When he retired from writing and directing, he taught filmmaking at several California universities. He died in Beverly Hills, California in 1999.

The Gladiators vs. Spartacus, Volume 1: Dueling Productions in Blacklist Hollywood and Volume 2: Abraham Polonsky's Screenplay are available now. Enter the code PROMO25 at the checkout for a 25% discount.