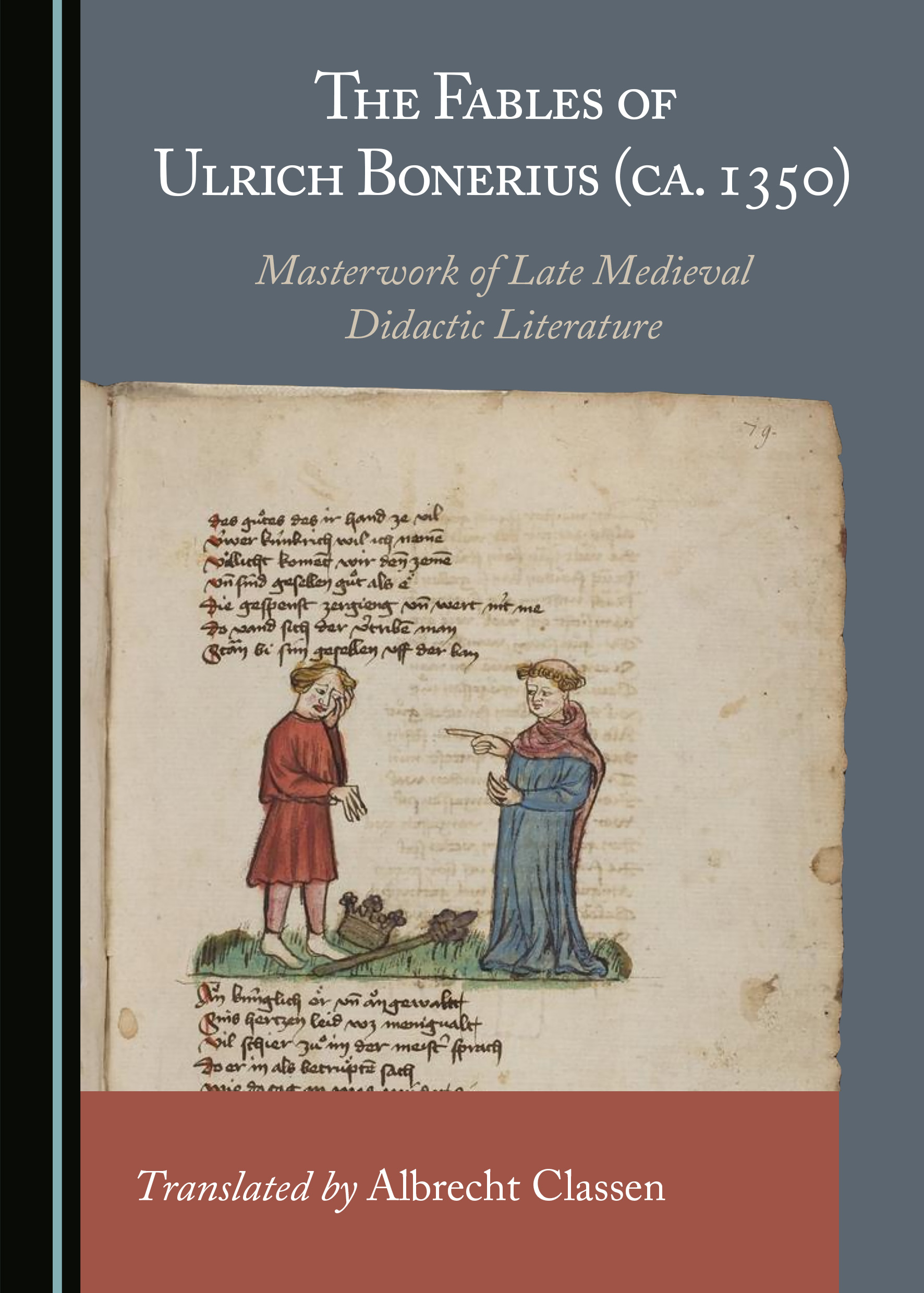 The Fables of Ulrich Bonerius (ca. 1350): Masterworks of Late Medieval Didactic Literature provides the first English translation of all one hundred fables authored by the Swiss-German Dominican Ulrich Bonerius. In this edition of our 'Book in Focus' blog series, the translator, Dr Albrecht Classen, Professor of German Studies and Director of Undergraduate Studies at the University of Arizona, shares some thoughts on the figure of Bonerius and reflects on the enduring popularity and importance of the fable form.

The Fables of Ulrich Bonerius

By Albrecht Classen, University of Arizona

It is characteristic of fables from across the world that they all share essential features, working with similar animals and similar themes, topics, values, and ideals. Fable literature is profoundly predicated on numerous archetypal topics, that is, fables address profound concepts of moral and ethical ideals underscoring human life, and this across the world, in virtually all cultures and throughout time. Intriguingly, despite a clear geographical and cultural divide, the western tradition of fable literature, established by Aesop in the sixth century BCE and continued from then on all the way through the Middle Ages and the early modern age (actually until today), meets its harmonious counterparts in the eastern and southern traditions. The animals operating in the fables might differ to some extent, when comparing South American with African or Asian fables, but, in essence, all fable authors had very similar ideas and values in mind. By means of fables, authors throughout history have been able to address critical issues pertaining to the well-being of human society at large, criticizing moral and ethical shortcomings.

In the western tradition, the list of human foibles and weakness has been summarized, from a religious perspective, by the group of ‘seven deadly sins,’ as formulated already in the early Catholic Church. However, while fables approach the same issues, they address them with a softer method, mostly having animals interacting with each other in a large variety of ‘social’ contexts and different conditions. These then reveal fundamental shortcomings of people, whether greed, arrogance, hubris, lust, foolishness, jealousy, envy, evil advice, ignorance, or plain stupidity. Reading fables, which only deceptively seem to aim for young readers, makes it possible to examine wrong behavior, selfish attitudes, misunderstandings, and dangerous situations, and to outline ideals and dreams which might not exist in reality, such as the desire for freedom on an individual or a collective level.

All those aspects find their most vivid expression in the fables by the Dominican Swiss-German preacher-author Ulrich Bonerius from Bern, who published his collection of fables, The Gemstone, in ca. 1350. Those are now available also in an English translation, and this for good reasons. Bonerius was a late medieval writer, but his fables prove to be highly meaningful for audiences both in the past and in the present. As any closer look will demonstrate, here we encounter one of the best fourteenth-century poets who approaches his task rather humbly, not claiming to be highly sophisticated in his poetic skills. However, virtually all of his hundred fables and related texts emerge as stunningly relevant for all people who embrace the ideals of a morally and ethically upright society. The rich manuscript tradition containing his fables until the early sixteenth century confirms Bonerius’s tremendous popularity.

We cannot argue that Bonerius pursued narrowly Catholic ideals, although he was a Dominican preacher reaching out to an urban audience. On the contrary, he constantly demonstrates in his fables and other verse narratives (sometimes with no animals operating in them) that he understood most profoundly the essence and conflicts of human existence and the ordinary behavior and ideas of most people. Using the framework of the fable, the poet succeeded in formulating clear-cut criticism of foolishness, sinfulness, self-illusions, aggression, meanness, deception, lying, and selfishness. Like many other fable authors, for instance, Bonerius refers to the rooster who finds a gemstone in a manure pile and dismisses it because it is not food for him, thus demonstrating his own blindness to the deeper truth of the gemstone. The poet, however, alerts us then that this represents the most common human failure to understand the ultimate value of truth, honesty, goodness, and spirituality. In one of his last narratives, Bonerius illustrates how quickly people forget their most cherished values, such as friendship, when they are deceived by money and political power. Greed and lust are some of the most dangerous elements in human life and make us ignore what really matters in our existence. 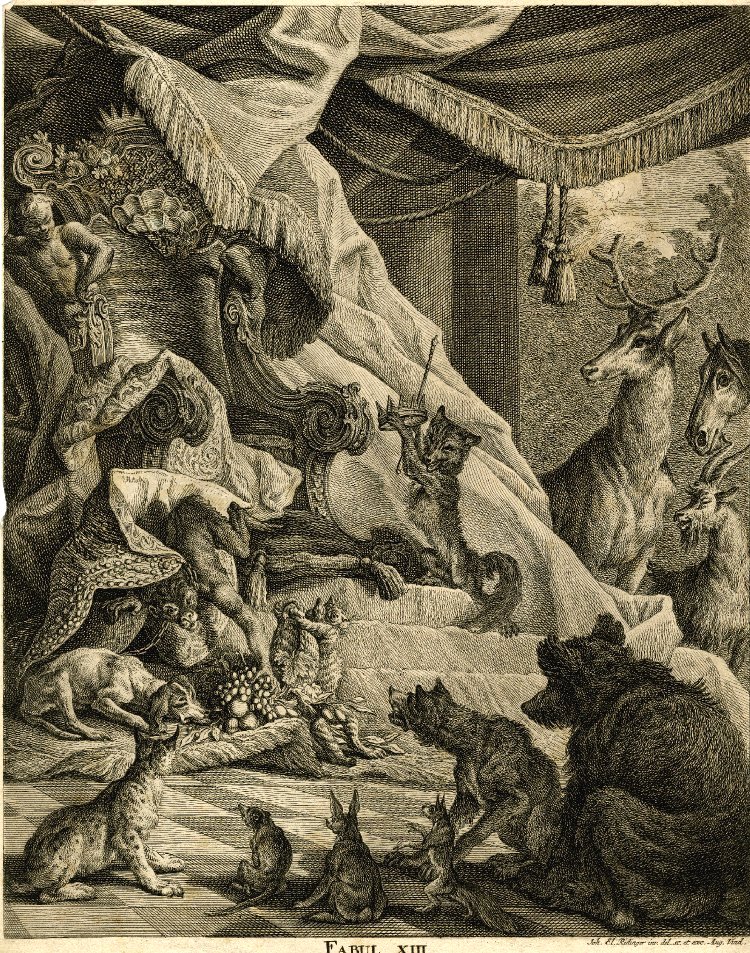 Fables, like those formulated by Bonerius, bring to light fundamental values for people throughout time and in all cultures. Above all, he strongly argues in favor of the timeless ideals of friendship, honesty, commitment, compassion, and a sense of community. At the same time, there are numerous fables in Bonerius’s The Gemstone that address the deep desire for freedom, individually and collectively, and this within the framework of the late Middle Ages. His work suddenly forces us to reassess our general notion of political history and alerts us to the fact that the desire for freedom existed already well before the rise of modernity.

While many of these fables deal with themes commonly formulated already in classical and medieval fables (such as city mouse versus country mouse, or the dog versus a thief), Bonerius often goes further and questions also how people cope with their lives and what they ought to remember if they want to gain more essential insights into what really matters. As he emphasizes, for instance, those who keep the imminence of death in their minds, and this already at a young age, will have the advantage of living more meaningfully. However, this author also laughed about people who just do not have the intellectual capacity to cope well under whatever circumstances and cannot gain much even when they attend the best schools possible.

Bonerius targets many other critical issues that affect deeply human existence, such as intolerance, injustice, arrogance, selfishness, and naked egoism. What makes his fables so meaningful today, and this after ca. 670 years, consists of his ability to engage with very ordinary conditions in human life. His narratives deal with men and women, old and young, rich and poor, and The Gemstone thus emerges as an ideal literary platform, if not mirror, for people of all walks of life. Reading these fables invites us to reflect more deeply about our own existence and our relationship with friends, neighbors, and all other community members, and to examine critically who we are as individuals in ethical and moral terms. Bonerius challenges us through his fables and similar verse narratives to probe whether we are fools or wise people, and regularly he wants us to think about our social relationships and our interactions with our social environment.

In many cases, there are good reasons to smile about the animals or human actors in Bonerius’s fables, but that humor then turns toward ourselves, so The Gemstone can be identified as a powerful literary catalyst from the late Middle Ages which carries surprisingly refreshing and timeless insights about us as human creatures.

Dr Albrecht Classen is University Distinguished Professor of German Studies and Director of Undergraduate Studies at the University of Arizona, where he researches and teaches medieval and early modern European literature and culture. He has published close to 110 scholarly books and around 730 articles. He is the editor of the journals Mediaevistik and Humanities, and is the former President of the Rocky Mountain Modern Language Association and the Arizona Chapter of the American Association of Teachers of German. He has received numerous awards for his teaching, research, and service, including the Bundesverdienstkreuz am Band from the German government in 2004. Most recently, in 2017, the rank of Grand Knight Commander of the Most Noble Order of the Three Lions was bestowed upon him by the Duke of Swabia, and, in 2020, he received the German Academic Exchange Excellence Award in International Exchange.

The Fables of Ulrich Bonerius (ca. 1350): Masterwork of Late Medieval Didactic Literature is available now. Enter the code PROMO25 at the checkout for a 25% discount.