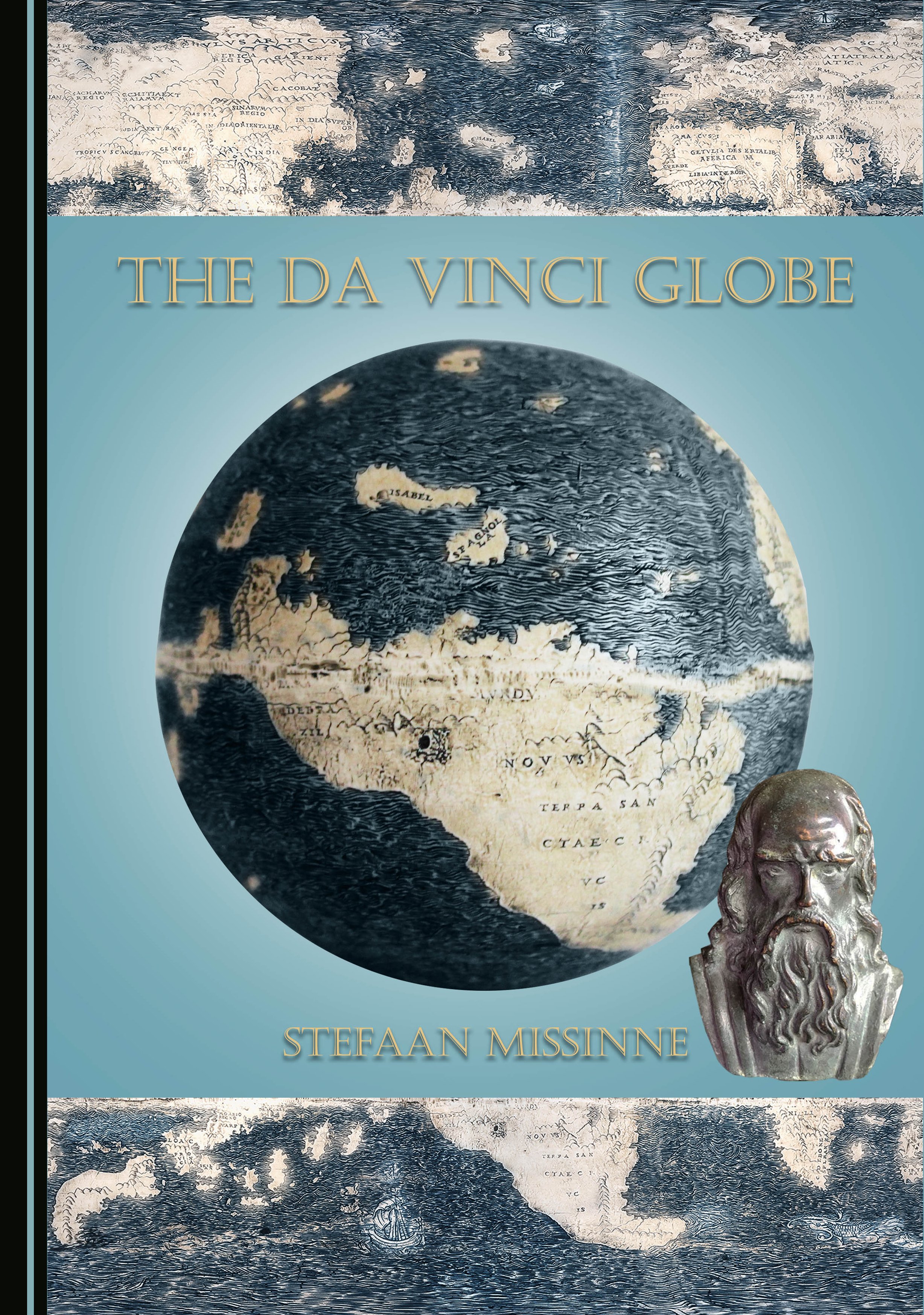 At the International Map Fair organized by IMCOS (The International Map Collectors´ Society) in June of 2012 located at the Royal Geographical Society in London, Prof. Stefaan Missinne, Fellow of the RGS, made the discovery of an Ostrich Egg Globe from early Renaissance. Forensic analysis and yearlong detailed international interdisciplinary research revealed this unique artifact to be the work of non-other than Leonardo da Vinci. Professor Missinne’s ground-breaking findings were published by Cambridge Scholars in August 2018, and since then the work, simply titled The Da Vinci Globe, has been widely praised, with one reviewer even going so far as to call it “one of the most significant discoveries of the 21st century” (Ambassador António de Almeida Ribeiro).

The huge amount of international interest in the book’s findings since its original publication has led to the revelation of further new insights. In this edition of Book in Focus, Professor Stefaan Missinne discusses some of these new findings, and opens up on the reaction that the book has received.

The da Vinci Globe: Some New Findings and Additional Insights

Since the original publication of The Da Vinci Globe in August of 2018, some interesting new findings and additional research into the da Vinci Globe (Picture 1) have come to light. These resulted from intensive personal preparations prior to attending numerous international conferences. In addition, some new insights have also been obtained from interactions with the public during and after these conferences and the lectures I was happy to give in Spanish, French, German, English, Italian and Dutch. 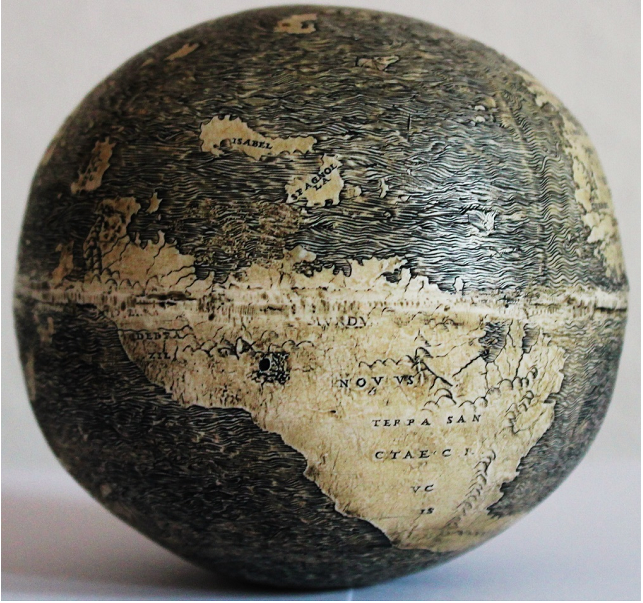 An important input came from numerous book reviews from experts and academics across the globe, which can be viewed on the webpage of CSP. The international publicity the book received from various media outlets including TV and radio stations, international press agencies, science journalists and foreign correspondents during the Quincentenary of Leonardo da Vinci garnered even more attention. This sometimes led to unexpected questions, as well as new insights and formulations. A Wikipedia page on the topic was also created, which provided broader interdisciplinary views on the historical significance of the discovery of Leonardo’s Globe. In addition, the personal congratulatory messages I received from numerous foreign ambassadors, heads of states and the offices of European monarchs, including from H.M. Queen Elizabeth II, were a particular highlight. Now I come to some of the most interesting new findings and insights.

First, I would like to highlight the depiction of the hybrid monster on the da Vinci Globe and its identical twin, the Lenox Globe. This use of a semiotic rebus, a sentence expressed pictorially, echoes a visual code, which is only revealed when turned upside down.

In this case, it is the fantastical big-eyed monster depicting the parable of Iona landing on a volcanic island. The intricate design of this rebus results from a uniquely written description by Leonardo in Manuscript A, page 109 recto with the title: “How do you design an imaginary animal to look like a natural animal?” Leonardo’s written artistic instruction in Manuscript A, page 109 recto reads (in English translation) as follows: “Since it is impossible to represent an animal without giving limbs, and given that every limb must appear accordingly, it must resemble a limb of another animal and, consequently, to make an imaginary animal, it must give it body parts of a true animal.”

The composition of the hybrid sea monster on the Globe is a collection of seven specific animal body parts, which follows Leonardo’s layout consisting of exactly seven parts in his instructions.

In Picture 3, the following collection can be discerned: the bony square scales of an armored pike; the armored horns of a beetle; the unmistakable melon of a dolphin; the rostrum of a sturgeon; the exceptional round eye of a Levantine crocodile; the barbs of a gurnard fish; and a whale's fin. The finesse of this rebus displays Leonardo’s intellectual ingenuity as the large tail of the monster becomes the volcanic island, as referred to in the travels of Sir John Mandeville, where the parable of Iona survives. Leonardo refers to “Giovan di Mandinilla” in his Codex Atlanticus, page 559 recto. The Italian genius applies numerous rebuses in his codices and quotes the parable of Iona and the monster in his letter to Benedetti Dei, reflecting his personal dream in Codex Atlanticus, 265 verso. The meticulous engraving of the hybrid monster on the ostrich eggshells of the da Vinci Globe and its cast, the Lenox Globe, includes this small but very significant detail. 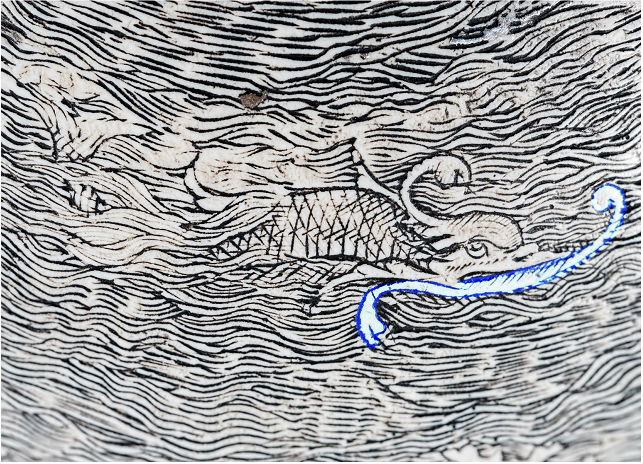 Leonardo’s writings on volcanos are quoted on page 163 of the book: “The great rocks of the mountains will throw out fire, so that they will burn the timber of many vast forests, and many beasts both wild and tame.” The foregoing confirms the fact that Leonardo had knowledge of the effects of volcanic eruptions. This knowledge does not seem uncommon, given that Leonardo originated from Italy, where volcanic islands like Sicily and Stromboli, among others, have been active since antiquity.

The book, as published in 2018, explores the detailed orthography, fluid dynamics and oceanic currents of the da Vinci Globe, but the discovery of the North Equatorial Current as observed and described by Columbus, which is clearly engraved on the da Vinci Globe, is a new finding. 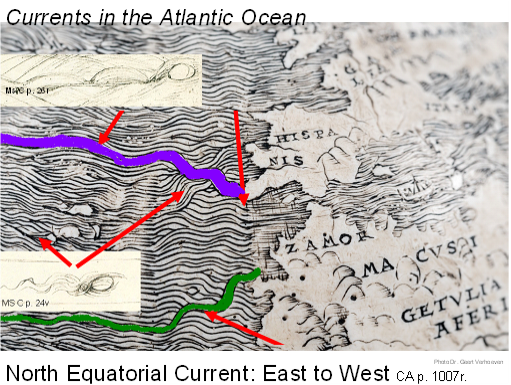 Cabral took this ocean current, having been advised to stay away from the African coast and landed rather by coincidence on the northeast coast coast of Brazil. To the north is depicted the strong “double” counter-current, the Gulf Stream returning from the west and leading to the shores of the Iberian Peninsula. Added to this are mingling flows and meandering bodies of water on the Globe. Leonardo describes this specific aspect of fluid dynamics in his Codex Atlanticus, page 280 recto, dated ca. 1503-1505.

Finally, I was asked in Strasburg at a conference of cartographers in 2019 as to which maps or globes copied the knowledge contained in the da Vinci Globe. This is a rather important question as it is a test for an authentication. Cartographers used materials which were then copied by others at a later date. This question helped to lead to another new insight.

The cartographic knowledge of the da Vinci Globe was transferred via its sibling, the copper cast Lenox Globe into the heart of the reappraised Jagiellonian Armillary Sphere dating from 1510, copied by the French horologist Julien Coudray. The armillary sphere containing the small globe is based on a blueprint of Leonardo da Vinci, as recent research shows. It depicts a large mountainous island in the Southeastern Indian Ocean bearing the name ‘America’ as part of the Latin phrase AMERICA NOVITER REPERTA, and this marks the first time that name ever appeared on a globe. Roger Bacon’s relocation of a large island may be reflected in this engraving on the da Vinci Globe, cast on the Lenox Globe and copied onto the Jagiellonian Globe. Until recently, it was unknown what may have inspired Leonardo, who writes the name of Rugieri Bacon in Codex Arundel (BL Arundel 263) on page 71 verso, in order to engrave this uniquely large island south of the Tropic of Capricorn in the East Indian Ocean. For more about this new significant historical finding, I refer to the peer-reviewed article in the Spring 2021 issue of the AHS Journal.

Undoubtedly, the inviting sea passage open to the west depicted on the Jagiellonian Globe convinced the French King Francois I to help finance the French expedition under the command of the Italian expatriate Verrazano in 1524. This brave decision was only five years after the death of Leonardo in 1519.

Thanks to the Lazarus Program of the University of Rochester, the Lenox and the Jagiellonian Globes were recently scanned and made available via the internet to a larger public. One may only hope that the New York Public Library would allow for an XRF testing of the copper of the Lenox Globe.

This is the fascinating story of the oldest globe showing America, and it is by Leonardo da Vinci: https://www.elnuevodia.com/ciencia-ambiente/otros/notas/esta-es-la-fascinante-historia-del-globo-terraqueo-mas-antiguo-donde-sale-america-y-es-de-leonardo-da-vinci/

The oldest globe with America is by Da Vinci, says expert: https://www.swissinfo.ch/spa/italia-arte_el-globo-terr%C3%A1queo-m%C3%A1s-antiguo-con-am%C3%A9rica-es-de-da-vinci--sostiene-experto/47107264

Breathtaking Archeological Discoveries That Unlock The Past: https://theappear.com/article/fb/812583711/breathtaking-archeological-discoveries-that-unlock-the-past/

Prof. Missinne was been invited to give a presentation on The da Vinci Globe at the Casino Maltese, Valletta, Malta on Wednesday, 24th of November. The event was hosted and organised by The Malta Map Society. 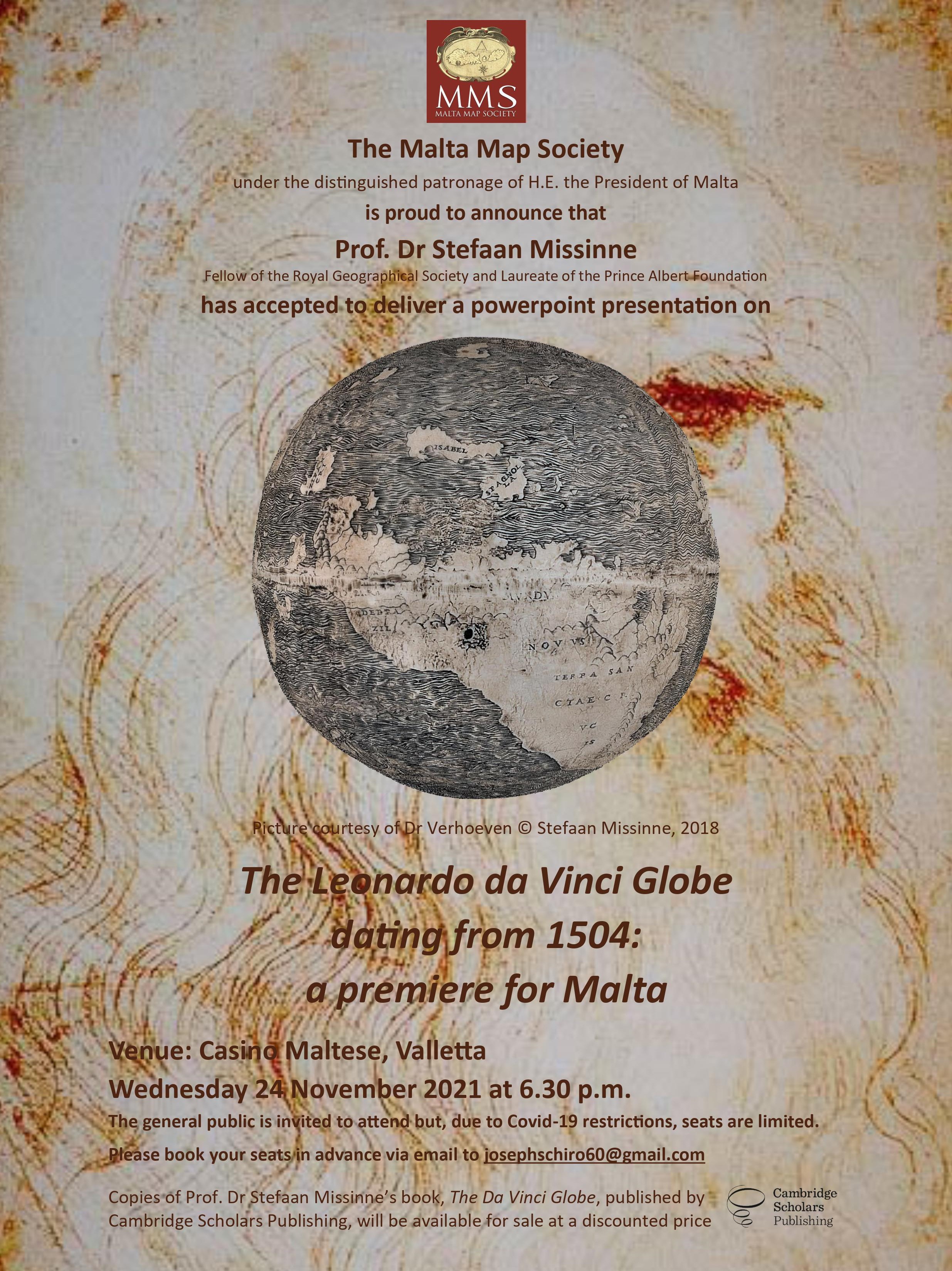 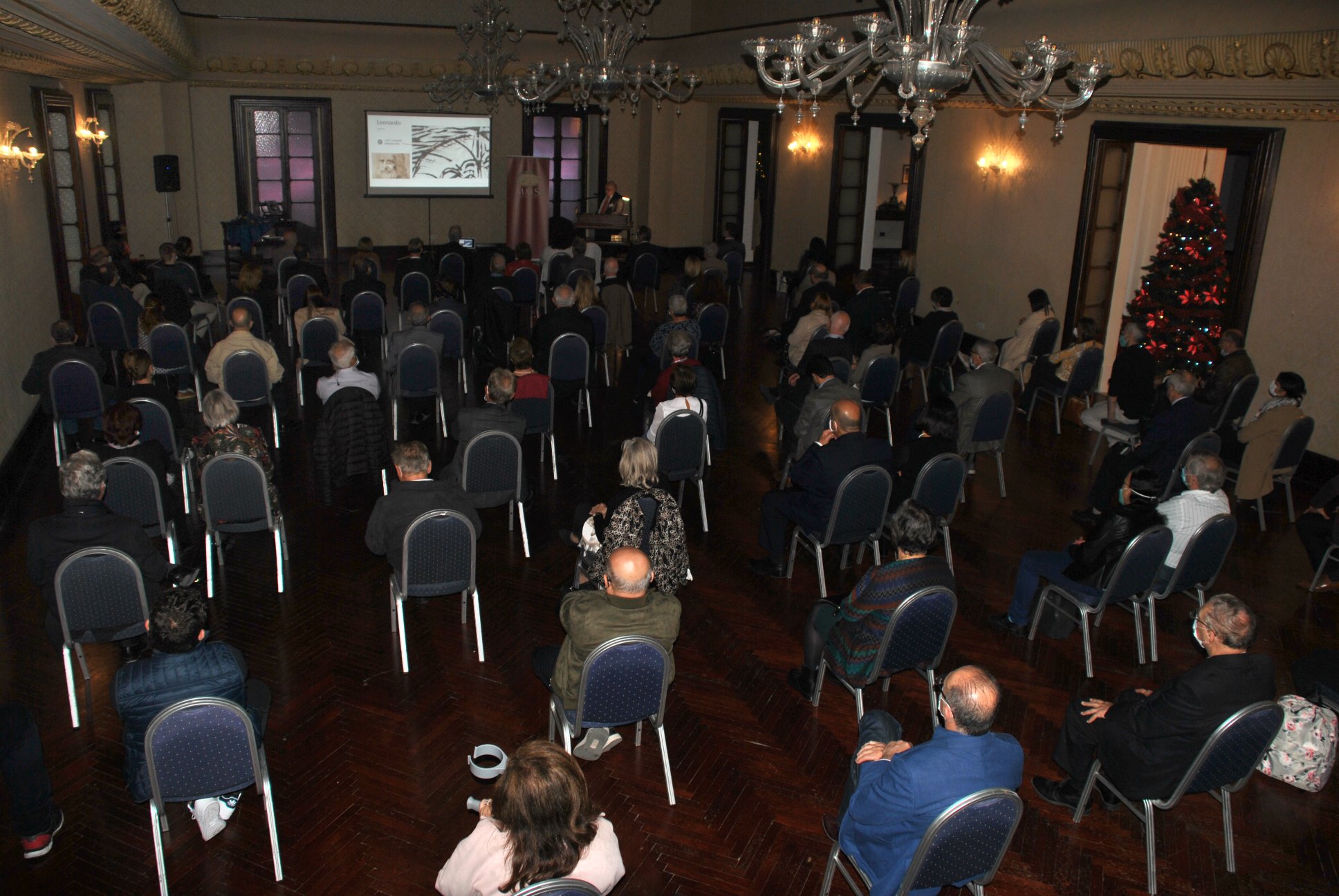 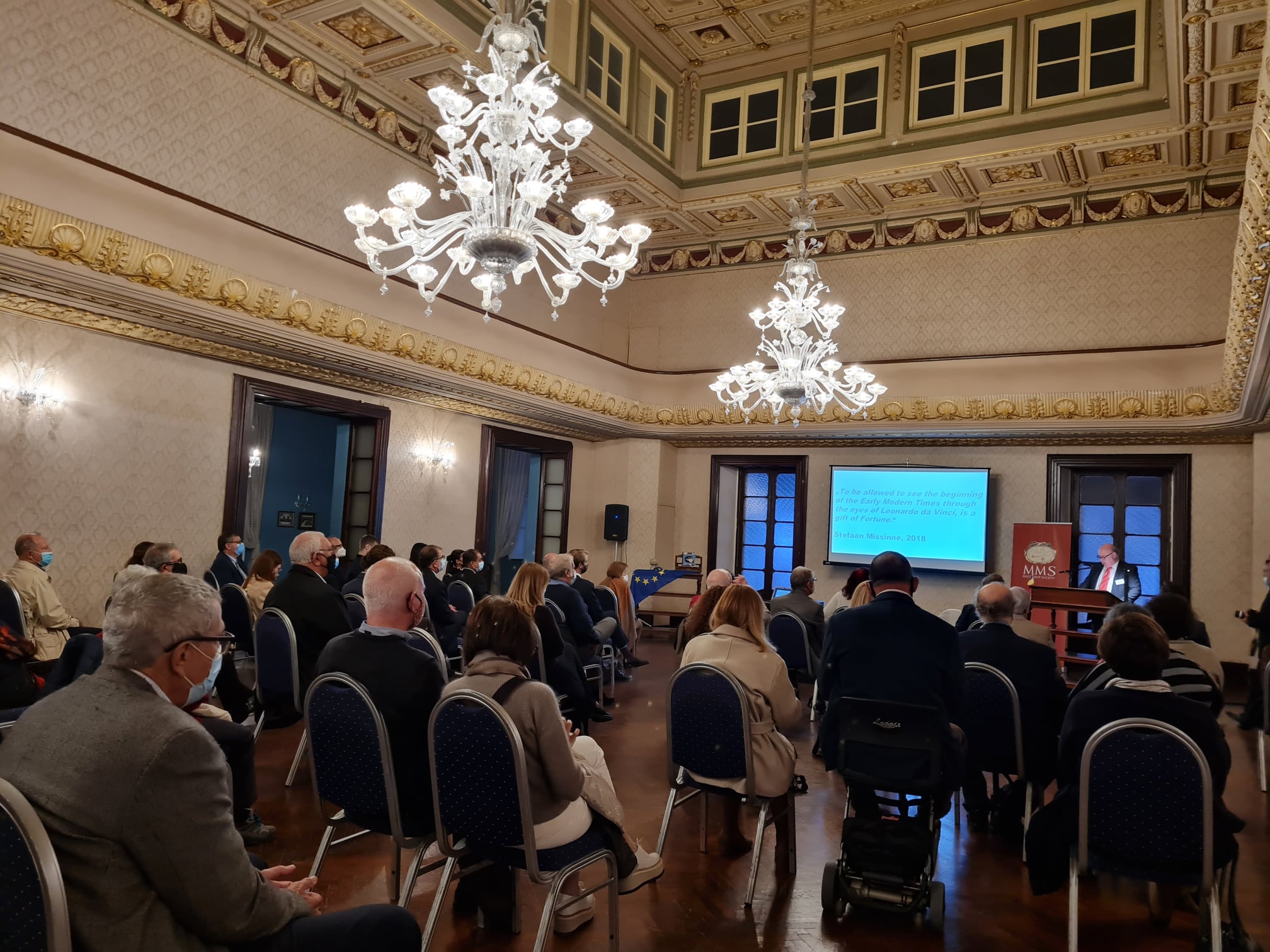 For a full overview of the event, please visit: https://maltamapsociety.mt/the-leonardo-da-vinci-globe-dating-from-1504-a-premiere-for-malta-lecture-by-prof-dr-stefaan-missinne/

Professor Stefaan Missinne received his PhD from the Economics University in Vienna in 1990. He is Laureate of the Prince Albert Foundation and Managing Director of the Ginkgo GmbH. A collector of antique maps, globes, old paintings and art chamber objects, he was a scholar of the Viennese art expert, Count Eugen von Philippovich. He is a member of the International Map Collectors’ Society, the Washington Map Society, the International Coronelli Society for Research on Globes and Scientific Instruments, the Leonardo da Vinci Society, the International Society for the History of the Map and the Austrian Society for the History of Science. His publications include “A Newly Discovered Early Sixteenth-Century Globe Engraved on an Ostrich Egg: The Earliest Surviving Globe Showing the New World 1504”, “America’s Birth Certificate: The Oldest Globular World Map: c. 1507”, and, with Dr Geert Verhoeven, “Unfolding Leonardo da Vinci’s Globe (AD 1504) to Reveal Its Historical Map”. Professor Missinne is an esteemed scholar of the late leading da Vinci authority Carlo Pedretti, who is honoured in the quality and scope of the research in this book.

The Da Vinci Globe is available now. Enter the code PROMO25 at the checkout for a 25% discount.