The Creative Advantages of Schizophrenia

The Muse and the Mad Hatter 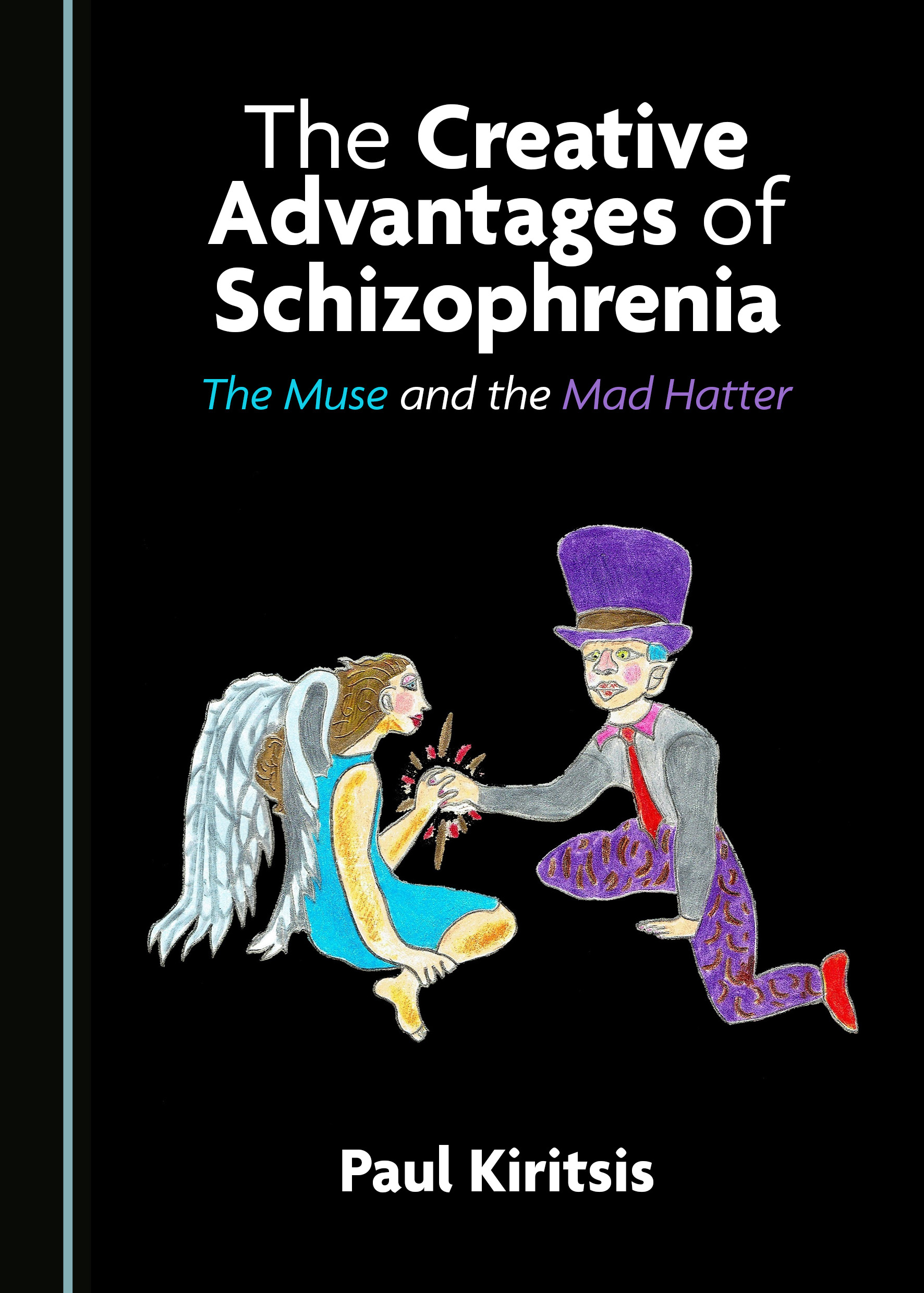 The current state of affairs in psychiatry can be construed as lamentable and fatalistic. Why? Well, in contemporary parlance, clinical labels like “schizophrenia,” “bipolar,” and “depression” encompass a pejorative chime and sometimes carry unjustified associations with violence and disconnectedness with the consensus reality. Schizophrenia and its notorious symptom-cluster (such as hallucinations, delusions, emotional blunting, anhedonia, and cognitive deficits), in particular, has been erroneously and absolutely identified as a veritable brain disease with a chronic degenerative course, lifelong deficits and impairments, and devastating psychosocial implications for both sufferers of the dreaded condition and their immediate relatives. Then there’s the social stigmatization that comes hand-in-hand with the gravity of that label. Individuals with the condition are often fighting two discrete but interconnected battles—an internal war with seemingly conflicting and disparate aspects of their own selves and a civil war involving social cues that corroborate their core conjectures around alienation and marginalization.

Other permutations of this invalidation are deeply entrenched in the professional consensus and in the long history of neuropsychiatry itself. For example, hallucinatory phenomena, often appraised as hallmarks of schizophrenia, have been subject to empirical investigations for around 150 years now. They are defined as percept-like experiences occurring in the absence of corresponding sensory stimuli under the auspices of the traditional biomedical model. This same model also decrees that they aren’t amenable to conscious control and can’t be differentiated from veridical perceptions. However, because vision is a constructive process guiding adaptive behavior, and because none of our perceptions are objectively “true” anyway, it would be more appropriate to define them as idiosyncratic perceptual constructions occurring in the absence of appropriate contexts. This second operationalization is complemented well by neuroimaging studies which show the same neural networks to be active during both a sensory perception of stimuli and a corresponding hallucinatory phenomenon. They may be visual, auditory, musical, tactile, olfactory, gustatory, synesthetic, or pain-oriented in nature, and occur in both clinical and nonclinical populations. (In my eyes, the clinical-nonclinical binary system in psychiatry is somewhat specious and will soon become antiquated.)

The delegitimization of experience and its personal significance can also be witnessed in the treatment of individuals subject to the hallucinatory process. Hallucinatory content, in particular, isn’t given much credence as psychiatrists and other general practitioners rush to ameliorate positive symptoms with a prescription of antipsychotic medications, many of which block dopamine D-2 receptors in the limbic system. It appears that approaching clinical phenomena with the curiosity, respect, and nonjudgement they deserve has been the prerogative of a select few. Wilson Van Dusen, a clinical psychologist who worked with the mentally ill at Mendocino State Hospital in California for approximately seventeen years, belongs to this magnanimous cohort. He launched a comprehensive investigation into the nature of his patients’ hallucinations, finding that the ratio of higher-order to lower-order content was around 1:5. In his clinical appraisal, he defined higher-order sensory experiences as feeling-related, nonverbal, and symbolic or allegorical; more often than not, he found that experiences of this type possessed intellectual, instructive, and creative merit, far surpassing the implicit understanding and IQ level of the individual they’d manifested through.  These hallucinations—if one could call them that—expressed the utmost respect for volition and usually broadened the patient’s values. On the other hand, the lower-order types were micromanagerial, malicious, and punitive voices with mutable qualities and a simple and limited vocabulary, and expressed themselves as running critiques that undermined, ridiculed, threatened, and beleaguered the patient.

What I’m attempting to underscore here is the enduring distortion of an innocuous idiosyncratic neurocognitive profile that parades under the banner of “schizophrenia.” Pathological magnification can be seen in the zealous over-prescription of labels (and psychotropic drugs for that matter) and in the minimization and devaluation of phenomenology, that being the personal significance of direct experience and the integral role it plays in therapeutic contexts. I would confidently declare that my book, The Creative Advantages of Schizophrenia: The Muse and the Mad Hatter, is an epiphenomenal child of this injustice, birthed from an inner desire to compensate for the historically disproportionate emphasis on pathological aspects of the disorder. Yes, the gaping deficits in working memory capacity, attention span, defocusing, and perspective-taking are blatantly obvious for those of us who have a relative or partner with schizophrenia. We know about the temporal intervals of heightened paranoid ideation; for instance, believing that the neighbors are conspiring with the FBI or CIA in order to incarcerate them. We know about the global cognitive dysfunction that can incapacitate them and render them unfit for any vocation or role in society.

If we were to approach the clinical phenomenon through the lens of evolutionary psychology, then these patently maladaptive deficits are nothing but vehicles of evolutionary disadvantage when it comes to the “survival of the fittest” hypothesis. A heterogeneous neurocognitive profile connected with the schizospectrum or psychotic disorders and its genetic footprints should have either been attenuated or eradicated from the gene pool by now, but it hasn’t. One popular theory is that schizotypal thinking, a form of creative cognition punctuated by hyperassociation and making nonconventional connections between objects and ideas, is common in individuals with schizophrenia (and some other clinical populations) and confers compensatory advantages. There are two sides to each coin, and, in this case, each neurocognitive profile. Is the nebulous swamp that births the demons of psychopathology also the spring of the Muses from whence the gold nuggets of exceptional ingenuity and inspiration come forth? Are the people who are overcome, possessed, and seized by the throes of “madness” also those that create novel products praised for their inventiveness, aesthetic beauty, unprecedented utility, and the sheer ineffable awe they’re able to evoke in the sophisticated and layperson alike?

You’ll have to read the book to find out!

“In The Creative Advantages of Schizophrenia, author and clinical psychologist Paul Kiritsis explores [the] relationship between creativity and psychopathology, between The Muse and the Mad Hatter, to quote the book’s subtitle. Given that the roots of this book are to be found in a doctoral dissertation, it is no surprise that this is, first and foremost, an academic book. There are ten pages of bibliography and every statement, claim, and assertion made by the author in the text is meticulously referenced. There are also details of clinical trials, discussions of the efficacy of various drug treatments, and references to different parts of the brain and its various functions. The author is also a poet and short-story writer. He deploys some of these skills to good effect, in that the non-technical side of this book is very readable. He highlights facts that most people will find interesting. For example, he tackles some of the myths that surround schizophrenia, particularly the fear that schizophrenia sufferers are all capable of psychotic violence. […] I also appreciated his argument in favor of a more holistic approach to the treatment of mental health disorders. His view is that society has adopted a reductive, biomedical approach to schizophrenia. Kiritsis argues for recognition that schizophrenia is not simply a disease that can be medicated away. He argues in favor of alternatives, like cognitive behavioral therapy, in both the treatment and prevention of the worst effects of schizophrenia. The author believes that proper treatment of the condition would permit sufferers to retain the advantages of their Muse while keeping the more malign Mad Hatter elements under control. I’m happy to award this book four out of four stars. It is well-researched and well-edited. The book will appeal to clinicians and medical students. It may also be something that relatives and friends of schizophrenics might turn to in search of a greater understanding of the condition.”
Brendan Donaghy
Online Book Club, October 2019

“The enigmatic relationship between creativity and the psychopathology of schizophrenia is expertly confronted in this book. Kiritsis’ comprehensive, beautifully written exploration of this perplexing and fascinating topic addresses head-on how creative potential is channeled, and why this is important. As a mental health clinician, art therapist, and scholar, I am most impressed by Kiritsis’ well-informed recommendations for clinical practice related to impact on overall quality of life for persons with schizophrenia and their activities of daily living. The in-depth examination of the link between long-term functional gains in executive functioning and the quality of creative output has implications that extend well beyond the mental health community. This illuminating book is a must-read for all.”
Donna Betts, PhD, ATR-BC
Associate Professor, George Washington University, USA

"Because the concepts and discussions in this book aren’t filtered into popular terminology, this book may prove challenging for the casual lay reader. Yet anyone deeply interested in the veracity of links between creative genius and psychological disorders will deem this well-written study stimulating and encouraging and find the symbolically related illustrations by the author (and other artists) fascinating."
Kate Robinson,
The US Review

Paul Kiritsis received his PsyD in Clinical Psychology from Sofia University, formerly the Institute of Transpersonal Psychology in Palo Alto, USA. He is a certified hypnotherapist, a researcher, artist, award-winning poet and short story writer, and the author of the creative compendium Confessions of a Split Mind. He holds postgraduate degrees in history, professional writing, and psychology. His clinical interests include schizophrenia and hallucinations, the temporal-lobe epilepsies and their neuropsychiatric comorbidities, and neurocognitive disorders. He is profoundly interested in the connection between creativity and disorder, as reflected in his published dissertation.

The Creative Advantages of Schizophrenia: The Muse and the Mad Hatter is available now in Hardback and Paperback at a 25% discount. Enter PROMO25 at the checkout to redeem.