Stories That Inspired the Plays 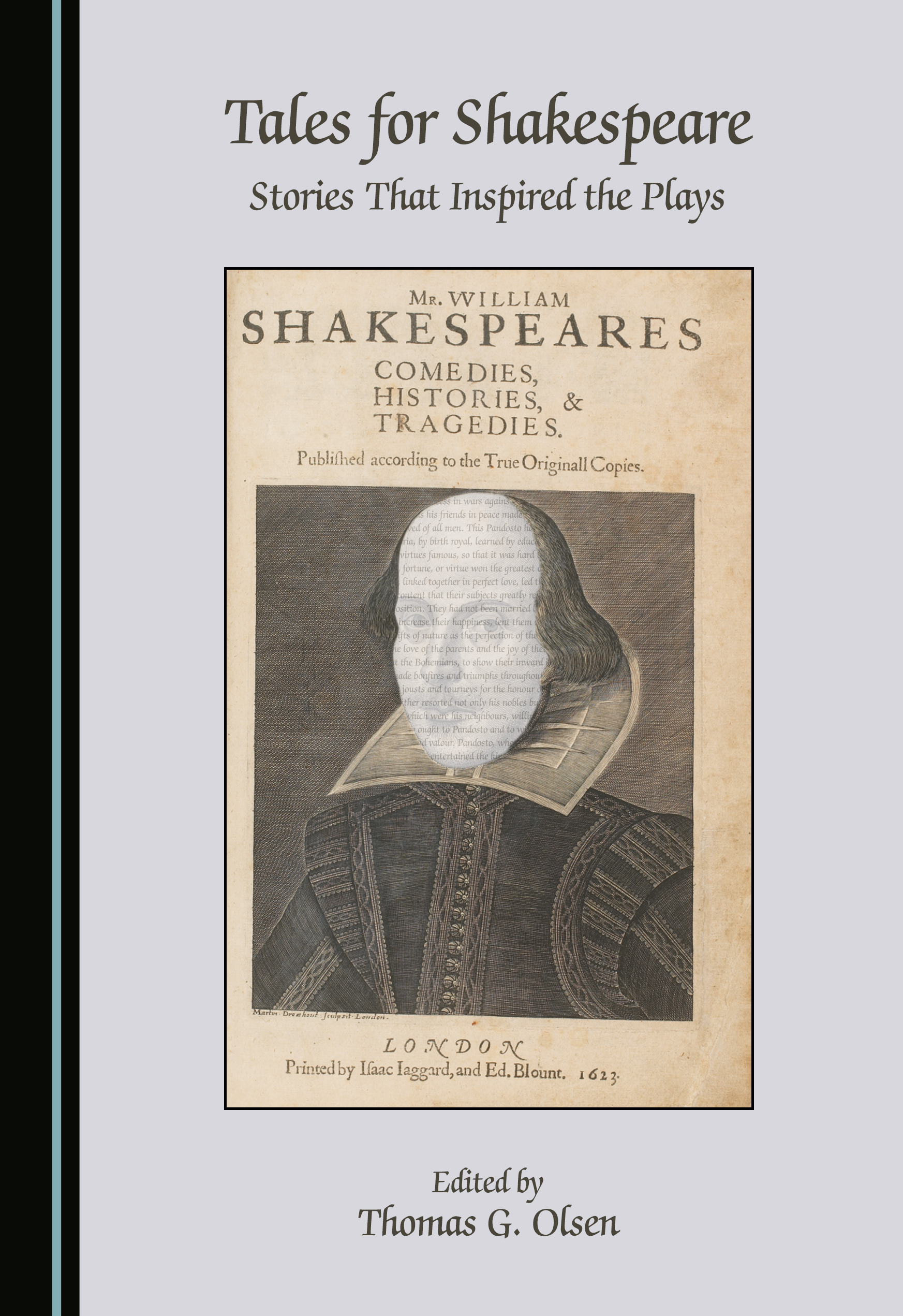 Compiled, Edited, and with Textual Commentary by Thomas G. Olsen

Why Tales for Shakespeare?

How does creativity work within the human imagination? Where does the creative impulse come from? What is original and what is derivative creative work? What do we mean when we talk about originality? These are just some of the questions, often formulated by, or with, my students in undergraduate and graduate classrooms over the years, which inspired me to publish Tales for Shakespeare: Stories that Inspired the Plays. The book is a collection of seven source stories that Shakespeare drew upon to write some of the dramatic works we now count among his greatest. My title plays on a famous 1807 collection by Charles and Mary Lamb, Tales from Shakespeare. However, instead of retellings derived from Shakespeare, I look at how Shakespeare retold others’ stories that, in one way or another, fired his imagination.

I decided to launch out on this venture because I found it difficult to provide my students with good, accessible, affordable versions of stories I wanted them to read and critically compare to the plays we were studying. With that goal in mind, I assembled seven important examples, adding a detailed introduction to help explain medieval and early modern ideas around creativity and originality—how, for writers, of these eras, creativity meant a skillful re-working of already known stories. Without this historical framing, students and general readers find it too easy to leap to the conclusion that Shakespeare was simply a plagiarist—a modern idea that has almost no meaning in the early modern period.  I wanted the stories in Tales for Shakespeare to be accessible, so each story is also framed by an introduction to help readers understand the source story in its own context. In addition, in order to help students and general readers to use the book on their own, all the texts are in modern spelling and supplied with notes and glosses of archaic and unfamiliar words.

After a long fascination with Romantic ideas of creativity as the expression of intellectual singularity or “genius,” for a number of reasons we are now returning to ideas held by the Elizabethans and Jacobeans, who understood originality to be a skillful negotiation of past and present, between what had already been created and the “new” creation. With very few legal protections governing the flow of ideas—what we today broadly call “intellectual property”—writers like Shakespeare freely adapted and transformed the stories of their forbears and contemporaries. The Merchant of Venice and Much Ado about Nothing were derived from Italian novelle, short prose works which were the popular fiction of their day. Romeo and Juliet had been told and retold in at least half a dozen Italian versions, but Shakespeare used an English poem translated from a French version, which, in turn, was translated from one of the Italian versions. When in about 1595 he created his dramatic retelling around the fated young lovers, there were already three published versions of the story in English alone, one in multiple editions, and there may also have been a stage play, now lost.

Othello and King Lear, two of English literature’s most revered tragedies, also had their origins in popular works of the period—Othello from an Italian novella and King Lear from a now-anonymous stage play, which itself was derived from a 400-year-old legend that had been rewritten dozens of times between the twelfth and sixteenth centuries. Not even Hamlet, probably the work most associated with Shakespeare’s “genius” as a dramatist, was his own; it was based on a Latin tale dating from the late twelfth or early thirteenth century, translated into French in the late sixteenth century, and soon after transformed into a now lost stage play, which was probably Shakespeare’s most direct source. His late play The Winter’s Tale was a rewriting of his contemporary Robert Greene’s wildly popular prose story Pandosto, published in 1588 and reprinted five more times during Shakespeare’s own lifetime.

However, one of the points I make throughout Tales for Shakespeare is that storylines are not the same thing as stories. The Winter’s Tale offers an excellent case study of how creativity worked within a literary culture premised on derivation from, and imitation of, prior stories. Although the storyline of The Winter’s Tale is largely the same as Greene’s, Shakespeare made some major changes: he allows his protagonist to live and his wife returns from what appears to be her death. In effect, a tale starkly and suddenly ending in death and loss becomes, in Shakespeare’s remake, a tragicomic mediation on loss, grief, regret, and the human capacity for endurance and forgiveness. King Lear presents a similar case, but in the reverse: the cheerful popular romance of political and personal restoration known to theatre-goers of the late Elizabeth period becomes, in his version, a searing tragedy whose bleakness sets a new standard for tragic catastrophe in English letters. Likewise, his changes to the sources for his Othello and Romeo and Juliet transform those stories’ meanings in subtle and sometimes quite important ways, as in his decision to have Othello take Desdemona’s life with his bare hands, rather than commission his ensign—the unnamed Iago figure in the source—to beat her to death with a stocking filled with sand.

Perhaps the most important conclusion I hope readers of Tales for Shakespeare will reach concerns Shakespeare’s capacity for representing human psychology. Long before there was a branch of knowledge or discipline called psychology, and with very few literary models to show him how to do so, Shakespeare was making interventions into the human psyche that stand out starkly from the literary conventions of his own time. His source author Cinthio gave Shakespeare a Moorish captain and his ensign, with almost no attention to how their thoughts and interpersonal dynamics might function, but Shakespeare gives us long passages of highly individualized dialogue in which the tortured minds of Othello and Iago reveal themselves in concrete, evocative, and believable ways. Where the characters in Arthur Brooke’s The Tragicall Historye of Romeus and Juliet speak in similarly formal ways, Shakespeare’s Juliet speaks in a different register from her parents, or even from her lover Romeo. We are encouraged to see them as individuals with passions and anxieties all their own. This phenomenon occurs across all the stories included in this collection, and likewise in the many works that I was not able to include: stories that typically focus on events and actions, often with little attention to human thoughts and interpersonal interactions, become vivid representations of human psychology avant la lettre.

I hope that this collection will find its way into advanced university courses on Shakespeare, but also into the hands of dramaturges and actors involved in productions of Shakespeare’s plays, as well as theatre-goers and general readers who appreciate Shakespeare’s dramatic canon and simply want to know more about how the plays came to be. In each example in Tales for Shakespeare, the lines of connection between source and play are clear, but, even more importantly, so are the many points of departure that make Shakespeare’s plays still vital and interesting over four hundred years after they were first acted.

Thomas G. Olsen is an Associate Professor of English at the State University of New York, New Paltz. He edited The Commonplace Book of Sir John Strangways (1645-1666) and has written numerous articles and reviews on a range of early modern English topics, including Shakespeare’s uses of source stories and Shakespeare as a source for later writers.

Tales for Shakespeare: Stories That Inspired the Plays is available now in Paperback and Hardback at a 25% discount. Enter PROMO25 at the checkout to redeem.