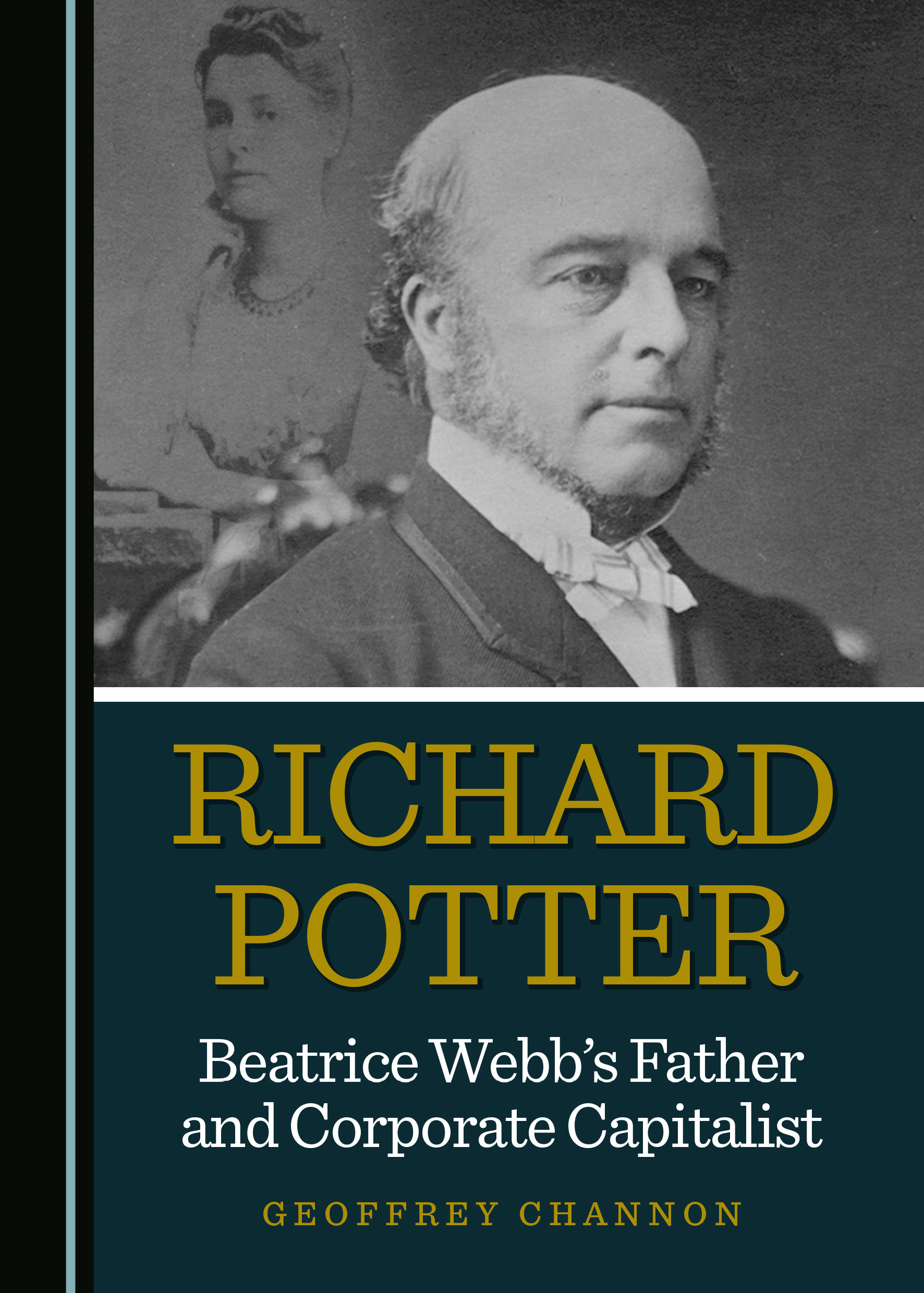 It is through my interest in nineteenth-century business elites and business enterprises that I first came across Richard Potter. Potter’s career exemplified the opportunities offered by the emergence of the modern, public joint stock company. As the chairman of the Great Western Railway in England and as President of the Grand Trunk Railway in Canada, he straddled the Atlantic. I call him a “corporate capitalist”, and take the reader inside these and his other companies to assess his effectiveness as a business leader.

In doing research on Potter, I soon became aware that he was much more than a major figure in the emergence of nineteenth-century corporate capitalism. He was also a loving and open-minded father of no fewer than nine daughters, several of whom became public figures in their own right. As such, I became interested not only in Potter the businessman, but also Potter the husband and father. Of his daughters, the most famous was Beatrice, who is best known as Beatrice Webb.

The discovery of Beatrice altered the balance of my research. It led to a different sort of book, which, I believe, is more multi-layered than is usual in mainstream business history and yet more widely focused than many biographies. This is a treacherous path to tread with traps on all sides—satisfying neither the business history specialist, nor the reader who is narrowly interested in the subject’s life story, nor the general reader interested in the historical period. Critical reactions so far have been very reassuring.

Beatrice was on my shoulder for much of the time I was researching and writing. Her diaries and her brilliant memoir My Apprenticeship were an ever-present source of information about family life and her relationship with her father and his motivations. How was it, I wondered, that, together with her husband Sydney, Beatrice became a leading influential figure of the British “Fabian” left, who broadly offered an alternative to the nineteenth-century individualism that her father had exemplified; who sought socialism through a bureaucratic state, populated with technocratic “experts”; and who was highly influential in shaping empirically-based social science and the claims of evidence-based policy in the UK?

Part of the answer I suggest is the openness with which her father (and, in different ways, her mother, Lawrencina) exposed his daughters to new experiences, ideas and exceptional intellectuals such as Herbert Spencer who was a lifelong intimate friend of the family. Nothing was off limits. Beatrice wrote that, “…the atmosphere in the home was peculiarly free thinking”. The impact of Richard’s openness with his daughters is very clear from the evidence of the lives that they left behind. Any reader of their letters, memoirs and journals will be struck by their versatility, their willingness to explore, discuss and debate with Richard and with each other, and his fairness between them.

In addition to her close bond with her father, Beatrice and her sisters benefitted greatly from the fact that both Richard and Lawrencina had been brought up in households where, consistent with the Unitarian beliefs of their parents, both sexes were treated as intellectual equals. Growing up in this environment, Beatrice acquired a confidence to challenge received wisdoms, but she also learned a great deal as her father’s companion and private secretary in the ten years after her mother’s death about how contemporary capitalism actually worked and the motivations of those who, like her father, shaped it. This exposure coloured in due course the public questions with which she is identified. 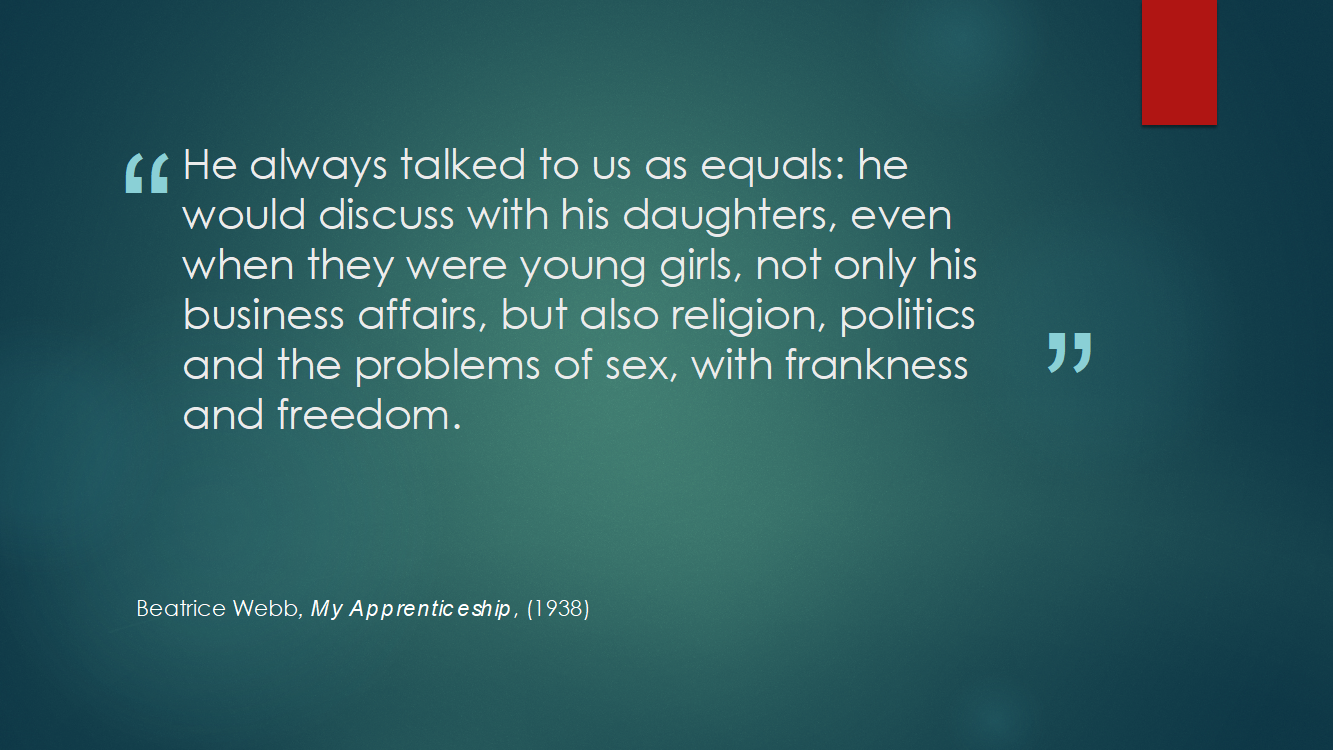 I conclude that an important motive for Potter in making money was his determination to secure the financial independence of his daughters, even in their marriages. In this he succeeded. They were each firmly anchored in the twentieth-century upper-middle-class.

I write: “In the mid-summer of 1937, as Britain was waking up to the Nazi threat, Beatrice and Sydney Webb hold a large garden party at their country home at Passfield Corner near Liphook, Hampshire. Over one hundred descendants of Beatrice’s parents, are there, as well as a few old friends, which include Bernard Shaw, the playwright and William Beveridge, the then Director of the London School of Economics and later the chief architect of the post-1945 welfare state.

In her diary entry, written at 4 am the following day, Beatrice muses on how her father, Richard Potter, who had died some forty-five years previously, would have drawn pleasure and satisfaction from the successes and status of his descendants:

“Dear old father how delighted he would have been at the thought of the successful careers of his descendants and their spouses. Three peers, four privy councillors, two cabinet ministers, two baronets, two F.R.S – a typical XIXth and XXth upper middle class family, rising in the government of the country. The most substantial group was the Holts (one of Liverpool’s wealthiest commercial families)…the most attractive the Meinertzhagens (merchant bankers). The Cripps – two distinguished professional families, of Harrison and Alfred Cripps…and the large contingent of Hobhouses (distinguished landed family)…”

“Geoffrey Channon has produced a painstaking, thoughtful and ingenious work of historical reconstruction which should provoke discussion for years. He retrieves and explains the lost story of Richard Potter, who, as chairman of the Great Western Railway in England and as President of the Grand Trunk Railway in Canada, bestrode the Atlantic and set the pattern for a Victorian international capitalist.”
Richard Davenport-Hines
Biographer of W.H. Auden and John Maynard Keynes; recipient of the Wolfson Prize for History

“Biography often runs the risk of being too narrowly focused and uncritical. This one adroitly avoids both pitfalls. Potter is placed first in the contented and liberal domestic context in which he was always anchored, with his daughter Beatrice following in his wife’s footsteps as confidante and adviser. But it moves far beyond this in its assessment of Potter’s involvement in the Great Western and Canadian Grand Trunk railways and the Hudson’s Bay Company and his links with Russia in the 1850s and 1860s. Changes in the Victorian political and business worlds are clearly drawn and leading intellectuals such as Hebert Spencer and social reformers and commentators such as Charles Booth are integral figures in the story.”
R.C. Richardson
Emeritus Professor of History, University of Winchester; Times Higher Education, 2 January 2020

"An insightful, multi-layered and meticulously researched biography of Beatrice Webb’s father, a neglected figure in 19th century entrepreneurial and railway history. It provides a fascinating account of the ups and downs of a Victorian corporate capitalist who was determined to secure the financial independence of his nine daughters."
Dr Terry Gourvish
Former Director, Business History Unit at the London School of Economics and President of the Association of Business Historians.

“This is a meticulously researched and beautifully written book which strikes a very successful balance between credibility based on academic rigour and an accessible style. The subject is Richard Potter, a wealthy mid to late Victorian businessman (1817–92), and as the title suggests, it is a story about business career, but also about a man’s life. This is a harder task than it might appear. A strictly thematic approach may end up being unrealistically compartmentalised, while a chronological blow by blow account risks becoming lost in the details. Despite these challenges, Geoffrey Channon strikes another good equilibrium here. […] I thoroughly recommend this book to business, transport and even social historians, and it is an enjoyable read of itself.”
James Fowler,
University of Essex, UK; Journal of Transport History, 2020

Geoffrey Channon is Professor Emeritus of History and former Pro-Vice-Chancellor at the University of the West of England. His publications include Railways in Britain and the United States, 1830-1940. Studies in Economic and Business History (2001).

Richard Potter, Beatrice Webb’s Father and Corporate Capitalist is available now in Hardback and Paperback. Enter the code PROMO25 at the checkout for a 25% discount. Also available as a Kindle eBook via Amazon.