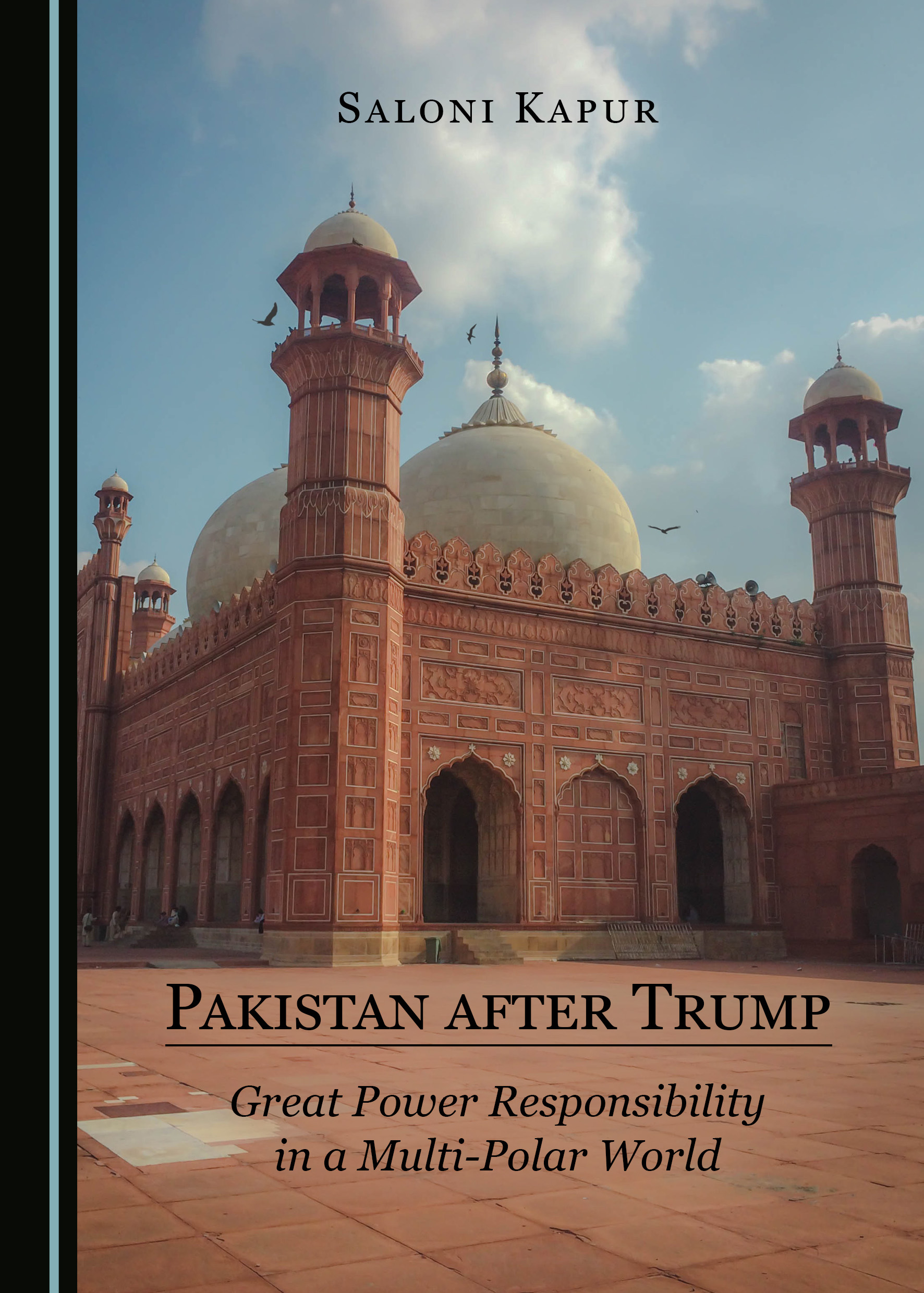 Pakistan after Trump: Great Power Responsibility in a Multi-Polar World is the outcome of PhD research that I conducted over seven years at Lancaster University, UK. My research grew out of an interest in the psychology of terrorism, particularly the role played by trauma, and consequently in programmes set up in various parts of the world to de-radicalise and rehabilitate arrested terrorism suspects. Having worked as an analyst and editor for a private security company for four years, I had developed a level of expertise in the operations of militant groups all over the world. My own experiences with post-traumatic stress and psychotherapy led me to explore the interplay between international relations, emotions, trauma, and violent extremism.

These varying interests led me first to investigate Saudi Arabia’s pioneering de-radicalisation programme, which led the way in the post-9/11 era and includes fascinating psychological work. I communicated with some inspiring individuals and read the research of others who had studied the Saudi programme. My research took me to Manchester to talk to Hamed El-Said, the co-author of a book on de-radicalisation programmes around the world. He suggested that I focus on such efforts in South Asia, which had received insufficient scholarly attention and which I would be well placed to study, being South Asian myself.

Professor El-Said suggested I look at Bangladesh, but further research revealed that the Bangladeshi programme was primarily about preventing radicalisation, and not about de-radicalisation and rehabilitation. I eventually stumbled upon the Pakistani programme, which appeared to be a comprehensive programme modelled on the Saudi one. As I worked to frame my research question, I struggled with how to reconcile the psychological model of this programme with my own training in international relations. I realised that I would have to place the issue of terrorism in its political and historical context in order to provide an international relations perspective on de-radicalisation and rehabilitation. This evolved into a historically informed study of security in Pakistan, exploring developments at the domestic, regional, and global levels of analysis since the birth of the modern Pakistani state in 1947.

As an Indian national and a grandchild of Partition refugees, I experienced considerable cognitive dissonance during my research. I started out with many conditioned attitudes towards both Pakistan and Islam. However, the deeper I delved, the more I perceived a rich, diverse, and stunningly beautiful heritage of faith, spirituality, and intellectual tradition. I started to adopt a more reflective and critical stance, thinking about my own positionality, and questioning the narrative on Pakistan-based terrorism that was taken so much for granted in my home country of India and also in the West, where I was living and studying.

I read the work of brilliant scholars such as Sultan-i-Rome, Nosheen Ali and Wali Aslam, who critiqued the Western narrative on Islamist violence originating from Pakistan by placing such violence in its historical and political context, and showing how it was a direct result of colonialism in various forms. I read the autobiography of Abdul Salam Zaeef, the Taliban official who was sent to Guantanamo Bay by the Musharraf regime after 9/11. I interacted with wonderful scholars such as Ishtiaq Ahmad and Muhammad Shoaib Pervez, whose work explores the prospects for regional security cooperation in South Asia, and who went out of their way to help me with my research. I read fiction by authors such as Kamila Shamsie and Faiqa Mansab, who have tried to give a human face to the phenomenon of terrorism. I listened to soul-stirring music on Coke Studio Pakistan that reminded me of the rich spiritual heritage of Pakistan, which my grandmother had introduced me to as a child. I met a Sufi shaykh who taught me to put my heart before my mind, and encountered government agencies that monitored my work to ascertain whether it posed a threat. I also experienced the rejection of an indigenous researcher working across national and religious boundaries.

In Pakistan after Trump, I bring the unique perspective and insights of someone who is both an insider and an outsider to the country to the policy question of how international society could do a better job of supporting counterterrorism in Pakistan. Looking at the ways in which the United States has tried to promote counterterrorism in the country post-9/11 through military aid, and in light of the Trump administration’s withdrawal of that aid amid a global power shift away from the West, I consider how international society could cooperate to address the challenge posed by terrorism. My work addresses the “de-humanisation” of terrorists in much research and policymaking, and reframes militants as social actors communicating with society through violence. The case study of Pakistan offers lessons for other parts of the world facing similar concerns, not least of which is my home country of India, which ranks eighth on the Global Terrorism Index 2020 and struggles especially with left-wing Maoist violence.

The book makes use of the concept of “great power responsibility,” which is derived from the English School of International Relations, and is based on the idea that the great powers in the international system have certain special privileges, but also special duties when it comes to maintaining international stability and security. While they cannot explicitly acknowledge this special role due to the idea of states being equal members of organisations such as the United Nations, this is something that is implicitly understood by all member states within international society. For example, when Imran Khan asks the United States to mediate on Kashmir, and Donald Trump offers to do so, this demonstrates a recognition by both parties that the United States, as a great power, has a special responsibility to help stabilise South Asia.

Employing this idea of “great power responsibility”, my book explores the normative or moral responsibilities of numerous great and regional powers towards causing instability and insecurity in Pakistan. This includes not only the United States, but also India and China, Middle Eastern powers Saudi Arabia and Iran, and former colonial ruler the United Kingdom. Finally, I offer prescriptions for policymakers from these states in terms of how they could adjust their policies towards Pakistan and South Asia in a way that is sensitive to the history of the subcontinent and promotes regional and global cooperation, while prioritising the security of human beings.

Saloni Kapur is Assistant Professor of International Studies at FLAME University, India. She works at the intersection of critical security studies, international relations theory, and South Asian studies. She is the co-editor of Securitisation in the Non-West (2019), and has contributed to numerous scholarly journals, academic blogs, and newspapers. She is a Fellow of the Richardson Institute, UK, and has previously worked at the London and Delhi offices of International SOS-Control Risks and at the United Nations Office on Drugs and Crime in Vienna. She holds a PhD in International Relations from Lancaster University, UK, an MA in International Relations from the University of Warwick, UK, and a BA in Economics from the University of Pune, India.

Pakistan after Trump: Great Power Responsibility in a Multi-Polar World is available now at a 25% discount. Enter the code PROMO25 to at the checkout to redeem.