Paganism and Its Discontents 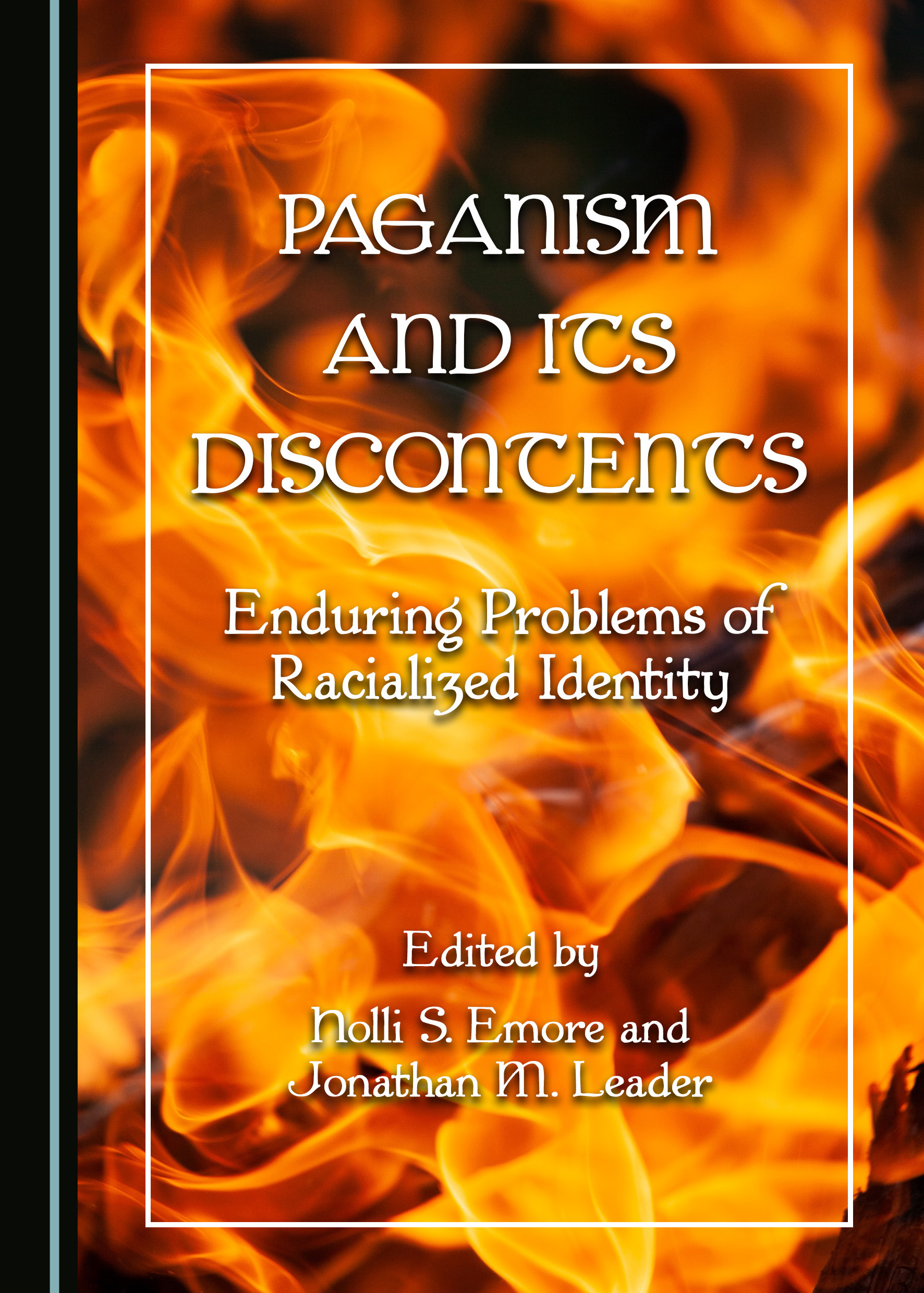 In this edition of Book in Focus, co-editor Holli S. Emore introduces Paganism and Its Discontents: Enduring Problems of Racialised Identity, a first-of-its-kind collection that brings together scholarship from within the contemporary Pagan community to directly combat the growing threat of white supremacy at the fringes of the movement.

Contemporary Pagans have long been aware of a shadowy corner of our world where some have married Heathenry with their claims of racialized identity, a belief system usually referred to as volkisch. Heathenry is a commonly used term for reconstructed forms of pre-Christian northern European religious practice. The essays in Paganism and Its Discontents: Enduring Problems of Racialized Identity provide an excellent overview of several issues generating discussion in recent years, not just among scholars, but throughout the wider Pagan community.

The extreme violence of this period—Mother Emanuel church in Charleston, the Pittsburgh synagogue, Charlie Hebdo offices in Paris, Pulse nightclub in Orlando, the New Zealand mosques, and many more tragedies—coincided with a study I conducted in late 2017. My topic was the ministry needs and preferences of Pagans, but a small handful of comments which came in startled me. In retrospect, I realize that one of the comments was clearly the writer’s barely disguised version of the infamous 14 Words[1], the veritable creed for white supremacists.

Soon my colleague and co-editor, Jonathan Leader of the University of South Carolina, and I began to notice an alarming thread which ran through many recent violent incidents. Perpetrators of the crimes were often political or religious extremists, as in the Charlie Hebdo stabbings. However, the majority were young white men who expressed racist views, and often used symbols, or name-dropped terms clearly read by those familiar with Norse and Germanic Paganism. Were these just fringe elements representing tired anti-Semitic and neo-Nazi tropes, or were we seeing a larger trend? I am not a sociologist or historian, but as a seminary director directly serving Pagans and other earth-based spiritualities, I was gravely concerned about the implications. Part of my own spirituality is tied to the well-being of others, including issues of social justice.

Many Heathens have for years worried about the rise of white nationalism in some strains of their religion. At present, nearly 200 Heathen organizations have signed Declaration 127, publicly disassociating themselves from volkisch ideologies (as represented by the Asatru Folk Assembly, or AFA). Groups such as The Troth and Heathens against Hate engage in education and advocacy efforts to promote tolerance and respect. However, these all-volunteer and underfunded organizations are facing a great challenge in stemming the tide of racism flooding the internet, dark net, chat rooms, podcasts and social media.

One reviewer of Paganism and Its Discontents complained that the book only presented papers but did not go beyond the symposium to offer practical solutions. While this belies a misunderstanding of a volume of published papers, the concern expressed should be seriously considered. Indeed, as the editors, our sincere hope is that these papers, the first published collection on the subject by both scholars and practitioners, will provoke earnest reflection followed by strategic action on the part of readers. I might add here that a peculiarity of the fields of religious studies, as well as cultural anthropology, is the taboo nature of “going native.” However, in the real world, practitioners may find themselves perhaps not going native so much as already being native. It is important that we recognize the value that we may gain by the scholarship not just of formal researchers, but of the practitioners of a minority branch of an already misunderstood minority religion.

To that end, Cherry Hill Seminary and the University of South Carolina Institute for Anthropology and Archaeology came together once more in December 2020 to host an open virtual panel which included several of the book’s writers, some Pagan, some not. The energetic discussion at Discontents Revisited, combined with the unexpectedly large response by registered attendees, prompted the scholar-panelists to schedule more opportunities, offline, for candid discussion. However, in that public seminar, panelists effectively challenged all present to be alert to the burgeoning dangerous manifestations of racialized religious identity.

What to do about this problem? As panelist Michael Strmiska observed, one cannot simply ignore it, because those who are indifferent provide cover for those committed to racism. Closely related to such indifference is the so-called “both-sides-ism” invoked by the US President following the murder of a protestor in Charlottesville, Virginia, by a white supremacist. When each side is always assumed to be equivalent, there is never a revocation of what is clearly toxic. In addition, as Strmiska noted, indifference toward racism empowers those who are not indifferent, that is, the racists. It communicates a lack of concern that racists can take as tacit approval of their racist ideas and actions, which it may indeed be. Where indifference does not express such approval, but only an unwillingness to make any more than token effort to oppose racism, this is just as good for the racists. Indifference is therefore neither inactive nor innocent. As the political philosopher Edmund Burke is reported as saying, “The only thing necessary for the triumph of evil is for good [people] to do nothing.”

Here in the American South, where I was born and have always lived, we used to feel pride that we were somehow “nicer” and more polite (or so we were told by newly-arrived non-Southerners), and had thus avoided much of the tension that took place in urban centers during the civil rights era. Being nice now appears to be just one form of the indifference about which Strmiska warned. Thoughtful readers of Paganism and Its Discontents, I might suggest, will feel moved to speak out, constructively, but with clarity, against racism, whether thinly-veiled, dog-whistled or blatantly wielded with fists.

There is one channel by which an opposing message may be transmitted, namely the arts, which have been employed in the service of propagating values and beliefs since the Venus of Laussel. No authoritarian rule has ever stamped out the need to express the ineffable, be it religious or political, in the form of theater, music, literature or visual arts. As long as those voices and images exist, we know that at least some of them will hear the muse of justice and respond. We should do all that we can to nurture and support the free development of the arts, which can convey messages which may otherwise be unheard.

My own contribution to the symposium was an autoethnographic account of discovering the history of the Daughters of the Confederacy, who were remarkably effective at channeling their Lost Cause mythology into statues and monuments, theater (their extravagant public ceremonies) and the printed word (school textbooks). Outrage in the wake of police shootings of black Americans found a ready target in the hundreds of Confederacy-glorifying monuments found around the country. Here in the capital of the first state to secede from the Union, I can attest to the career-ending difficulties faced by elected leaders who attempt to remove such icons. This also affirms the enduring success of the Daughters’ propaganda, which has come to be seen as history, even while historians just across the street at the university ostensibly teach otherwise. Those fighting racism and white nationalism would do well to fund and otherwise empower the arts as a proven change agent.

I am no objective observer in this field of study, nor can I be, immersed as I am in a region where the Red Shirts and the Ku Klux Klan held virtual rule not so long ago. Even so, I am gratified to have played a small role in summoning scholarship which can inform further studies, wider voices, and if we are lucky, much-needed change. I invite others to join the conversation; our lives and our futures depend on it.

[1] "We must secure the existence of our people and a future for white children." The most well-known slogan of white supremacist movements, attributed to David Lane, founder of The Order.

Holli S. Emore, MDiv, is Executive Director of Cherry Hill Seminary, USA and author of Constellated Ministry for the Pagan Spiritual Landscape (2021). Committed to building interfaith relationships, both locally and globally, she has served on the Board of Directors of Interfaith Partners of South Carolina since 2012 and as a regional resource for law enforcement, victim services and criminal justice classes since 2004. She is the founder and priestess of Temple Osireion, and served as the first South Carolina Regional Lead for Disaster Spiritual Care for the American Red Cross.

Jonathan M. Leader, PhD, is the State of South Carolina Archaeologist and Chair of Archaeology at the University of South Carolina Institute of Anthropology and Archaeology. He has 40 years of archaeological and anthropological experience within diverse communities, providing training, research and consultations on four continents, the islands of Micronesia and the Caribbean. His publications include Catawba Indian Nation Boundary Cemetery Project and “Archaeological Prospection: Near Surface Geophysics” in Archaeology in South Carolina: Exploring the Hidden Heritage of the Palmetto State.

Paganism and Its Discontents: Enduring Problems of Racialized Identity is available now. Click here to access a free 30-page sample. Enter the code PROMO25 at the checkout for a 25% discount.