One Hundred Years in Galicia 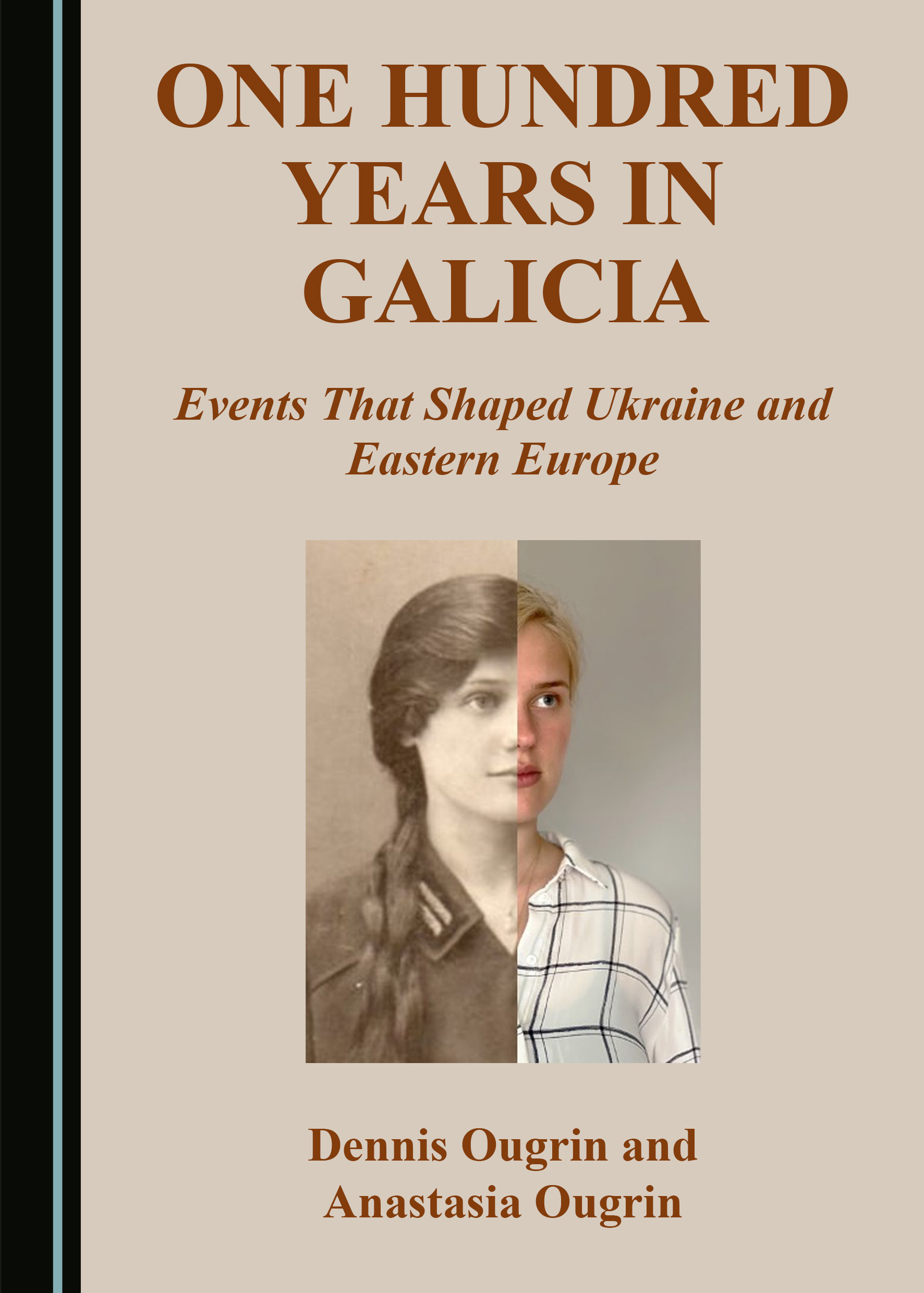 By Dennis Ougrin and Anastasia Ougrin

Ukrainian Galicia (“Halychchyna” in Ukrainian) is not to be confused with Spanish Galicia. Separated by 3,000 kilometres, both Galicias have a lot more in common than just their names. The original proto-Celtic “salanos” for salt has been transformed into a number of words with “hal” or “gal” roots still used around the world today.  The Welsh speaker who is asking for a little more halen with her Glamorgan sausage is invoking the memory of thousands of years of Celtic cultural domination of Europe where salt meant wealth and severed heads meant war victories. Occasionally ruled by their own monarchs, but more often than not forced to join their bigger and more aggressive neighbours, Ukrainian and Spanish Galicians have nonetheless retained their identity for centuries. The history of Ukrainian Galicia during the 20th century was firmly linked with the history of the rest of Ukraine, more so than at any other point since Kievan Rus’. Galicia has retained its separate dialect, cuisine and religion, as well as a resolutely condescending view of the East-Ukrainian barbarians who continue to arrive in their uncivilised masses, thirsty to absorb at least a drop of the rich culture of Galicia, the glorious Austrian Crown Land. Sitting in Lvivian coffeehouses and complaining about tourists, Galicians attract a certain curiosity from other Ukrainians. Their language is amusing to the Eastern Ukrainian ear. The Polish, German and Yiddish admixtures somehow sound classier than the Russian language dominating the East. As far as the cuisine is concerned, varenyky and borsht remain varenyky and borsht, no matter where in Ukraine you are. However, much to Eastern Ukrainians’ dismay, Galicians would rather have a poppy seed cake with their coffee than biscuits with their tea. Their insistence on going to church every Sunday and sticking to various and complex religious rituals throughout the year is less understandable. I have heard an educated mother from Luhansk say that she would never allow her child to play the role of the devil or death in a Ukrainian Christmas Nativity (Vertep). I once took a teenage Crimean boy to a church in Lviv, who, a few minutes into the service, asked me when all that howling was going to end.

Galicians secretly think that they are the only real Ukrainians and that, without them, Ukraine would not have existed in the first place. They subdivide all Ukrainians into svidomi (conscious) and nesvidomi (unconscious). Conscious Ukrainians appear to be an elite and exclusive group to which Galicians classify themselves as belonging. I mean, Gladwell’s ‘10000 hours’ would not even scratch the surface. All Eastern Ukrainians (skhidniaky) are seen as unconscious Ukrainians who embody a bit of moskali (a term for a Russian) or even katsapy (a derogatory term for a Russian), until and unless they give up their lives or suffer unimaginable hardships for the fatherland, batkivshchyna. Even then, the first Russian word these supposedly conscious Ukrainians utter risks moving them back into the unconscious category faster than a Galician nun could say ‘Hail Mary’! Galicians also think, deep down, that Easterners should become a little more like them, similar to how the French think English rosbifs should become a little more sophisticated and laidback.

Ukrainian politics has always been characterised not by oscillating between Left and Right, but between pro-Russian and pro-Western phases. Anastasia’s relatives jostled past a series of rulers, from Leonid Kuchma, the second President, who won the bulava from Leonid Kravchuk on the pro-Russian ticket, to Viktor Yushchenko, a vehemently pro-Ukrainian shtick, then back to the pro-Russian Yanukovych, after which the vote swung back to anti-Russian Poroshenko. This was a consistently steady rhythm before it became muddled by a comic called Volodymyr Zelenskyy, who came out of nowhere to take the political Hoverla[1] by storm and who seems unlikely to disappear rapidly into the void of the Kerch Strait. The pro-Russian leaders, however, had an important nuance. All of them, to some degree, betrayed their pro-Russian election ticket and focused on pro-European policies, further fuelling the treacherous khokhols (a pejorative Russian term for Ukrainians). This idea of treason against the Moscovian ruler goes back at least to the times of Ivan Mazeppa, the Ukrainian Cossack leader, who sided with Charles XII of Sweden against Peter the First (Great) of Russia at the beginning of the 18th century. For 150 years, his name was publicly cursed in Orthodox churches, along with other unsavoury characters who challenged Russian tsars.

This book about Ukrainian Galicia between 1902 and 2002 is an unearthing of our family’s stories intertwined with historical events spanning 100 years from the Austro-Hungarian Empire to independent Ukraine. The turbulence that Galicia saw in the 20th century is unrivalled, although England, for instance, might point to the 17th century as a possible contender in this regard. Yet the tumult of the 17th century gave rise to a flourishing 18th century, the same of which cannot be said for Galicia, which saw the unimaginable violence of the 20th century turn into major unrest at the beginning of the 21st. Ukraine, now at the youthful age of 29 and already established as one of Europe’s poorest countries, is nonetheless strategically important and not devoid of a certain beguiling presence on the world stage. Our book provides an insight into how independent Ukraine came to being. It follows the paths of two families through the most miserable and most unforgettable of times. Sifting through family photographs, we offer readers fleeting glimpses of old Galicia, telling the tale of how she gave birth to modern Ukraine.

[1] Hoverla is the highest mountain in Ukraine, situated on the border between Galicia and Transcarpathia.

“This wonderful short book by Dennis Ougrin (with two chapters by his daughter, Anastasia) holds so much! First it is a story of two (and more) families putting together a Ukrainian life, across every obstacle, in a contested corner of Europe. Second, it is a history, with necessary geographical and political detail, of that very special region, Eastern Ukrainian Galicia. Dennis Ougrin lets us feel the currents of Polish, Jewish, and Ukrainian life, all important, interweaving there. In Ougrin’s storytelling, the personal is not avoided; in fact, it (and the author’s wit) makes the political complexities of time and geography comprehensible. Third, this is a family story, a gift from her father that Anastasia and her descendants will treasure in the future. The stories of the Ougrin and Litynskyy families, so honestly and beautifully detailed, from the time of Franz Joseph to that of Mikhail Gorbachev, really make history come to life.”
Roald Hoffmann
Cornell University; Winner of the Nobel Prize in Chemistry, 1981

“It is the story of a very troubled part of Europe from the perspective of a single family, going back to great-great-grandparents and down to the present and back again from time to time. It […] is funny at times and there are some very sharp psychological observations, as one would expect from the author.”
Benny Dembitzer
Nobel Laureate

One Hundred Years in Galicia: Events That Shaped Ukraine and Eastern Europe is available now in Hardback at a 25% discount. Enter PROMO25 at the checkout to redeem.