An Outcome of Historical Experience, Survival and Wisdom 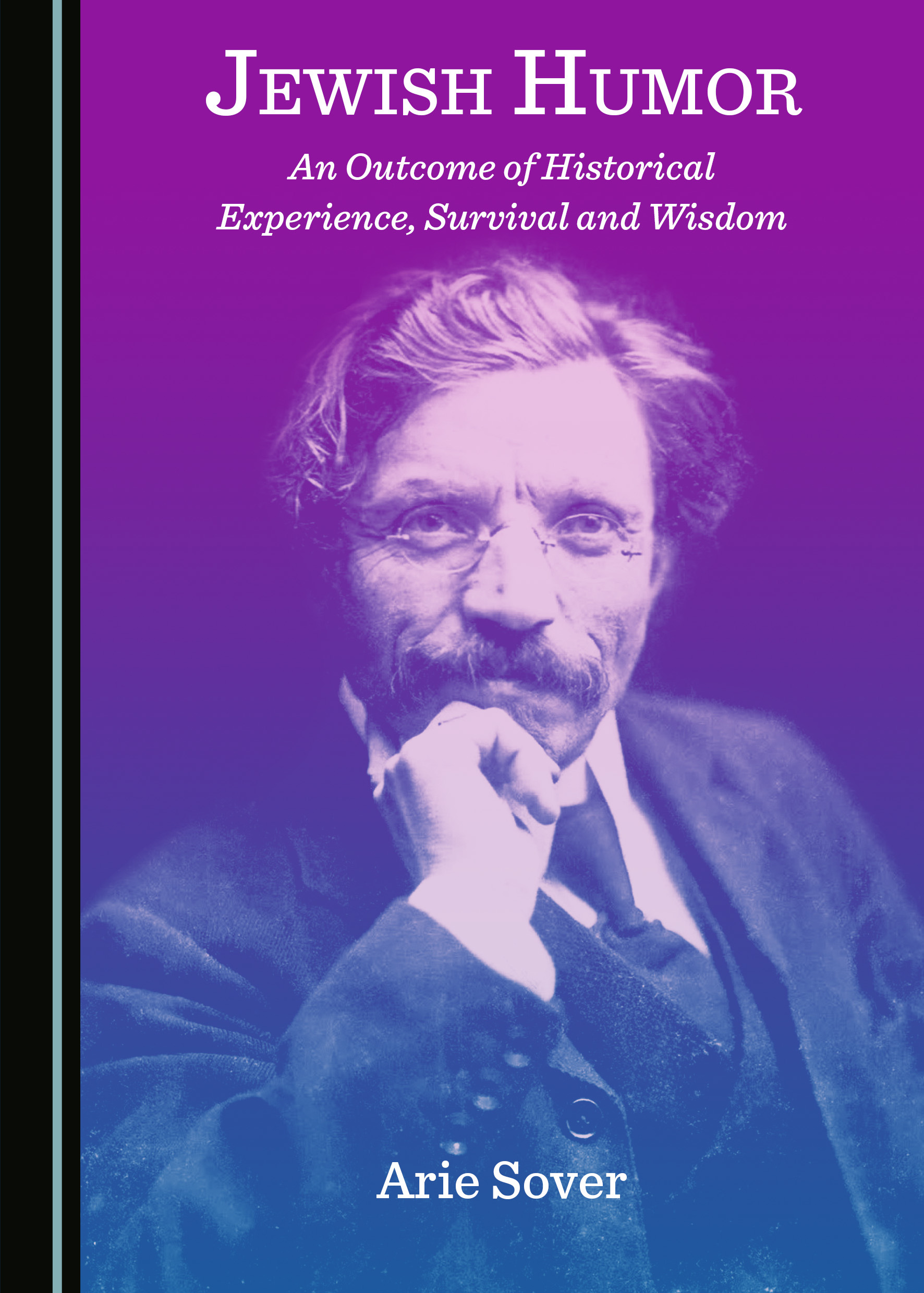 Jewish Humor: An Outcome of Historical Experience, Survival and Wisdom is outstanding and the first of its kind. This is a wide-ranging text that spans from the Biblical period to the present day. It includes a wide spectrum of styles that are expressed in various fields, such as the Talmud, poetry, literature, folklore, jokes, movies, and television series.

It is generally assumed that a book intended to explain the humorous characteristics of a given nation will refer almost exclusively to its humorous products. This is, in fact, what many studies concerning Jewish humor do. In my book, I decided to take a different approach, which I think is more appropriate. I considered that humor is not a self-sufficient entity. Rather, it is interwoven with the reality and life experiences of those who produce and consume it. Therefore, to reach the creative roots of Jewish humor, I understood that it was necessary to refer to the entire tapestry of Jewish life throughout the long history of the Jewish people, while focusing on the primary factors, which influenced its development.

The book tells the story of a people whose history and experiences over the course of more than three thousand years are unlike those of any of other country. There is no group of people in the world that, throughout its history, has been persecuted, suffered from the hatred of other nations, experienced pogroms, blood libels, deportation, and extermination that culminated in the Holocaust to the extent of the Jewish people.

In this book, I decided to tell the story of Jewish humor through the connection between those contradictory factors; between suffering and humor, and between pain and laughter. It is said that Jewish humor is “laughter through tears.”

However, this is only one aspect of Jewish humor. It has another important element, namely Jewish wisdom. For more than two thousand years, during which time the Jewish people were expelled from their lands and persecuted by the inhabitants of their host countries, the Jews did not stop learning. Every child from the age of four or five years onwards was required to learn to read and write and develop critical thinking. This occurred when the inhabitants of the world were mostly illiterate. The importance of studying amongst the Jews can also be seen through marriage. Whoever was a “Talmid Chacham” (an outstanding student), even if his wealth or family status was low, was automatically considered a member of the social elite and a highly desirable catch. Even if an outstanding student came from a poor household, he could still aspire to marry a wealthy girl whose family would support him throughout his studies for his entire life. Furthermore, his own children would retain some of his status and be considered a good catch when their time came, simply on account of being the children of an outstanding student. This custom still exists to the present day among ultra-orthodox Jews.

Wisdom is a resource that is reflected in all areas of life: in economics and culture, in science, and in the creation of humor. Humor is inherently based on creative thinking—which is itself based on wisdom—or, as we used to call it, “thinking outside the box.”

That is why this book is a complicated mosaic based on three central components of Jewish life: historical experience, survival, and wisdom. One cannot understand Jewish humor without referring to the various factors which led the Jewish people to create it.

The text refers to three periods of time, each of which contributed to the formation of Jewish humor. The first examines the existence of the central foci in Jewish culture, especially the Bible, the Midrash, and the Talmud. The second period refers to the Middle Ages, including the humorous secular songs in Spain. These marked the beginnings of a type of humor that pertains to everyday life, not stemming from religious sources, and the appearance of the Badchen (a kind of a joker) throughout Europe, which may be described as the first Jewish stand-up comedian. The third period starts in the 18th and 19th centuries, and marks the beginning of modern Jewish humor, which continues to this day.

The book focuses upon three socio-geographic regions where Jewish people lived and where Jewish humor was created, developed, and thrived: Eastern Europe, the United States, and Israel. Despite the cross-influences and similarities in certain aspects of the humor that developed in these three regions, due to the socio-economic differences of each of these places, they all have their own distinct characteristics.

This book reflects the great influence of Jewish humor on world culture, showing that it forms a significant portion of the world’s humor. In many Western countries, the leading humorists were—and in some cases still are—Jews. This is certainly the case in the United States, Russia, Germany, Canada, France, Britain, Austria, Australia, and many other countries. Jewish humor, which was based on Jewish history, managed to penetrate, and influence nations across the world to such an extent that it became a highly desired commodity. In the 1920s and 1930s, Jewish humor challenged authoritarian regimes in Central and Eastern Europe, including in the Soviet Union and Nazi Europe. It was the Jews who led the humorous struggle against the rapacious totalitarian regimes of Hitler and Stalin. The satirical stories they wrote and the jokes they spread became the property of all citizens. Their contribution to the struggle was a symbol of the defiance of the human spirit in the face of oppression.

Around 80 percent of the leading humorists of the United States in the mid-1970s were Jews, even though the Jewish share of the American population was, at that time, less than 3 percent. Jews were prominent as comedians in all venues: theater, cinema, television, and stand-up. They include, and this is an extremely limited list, the Marx Brothers, the Three Stooges, Fanny Brice, Danny Kaye, Larry Wilde, Jerry Lewis, Joan Rivers, Sid Caesar, Woody Allen, Lenny Bruce, Jackie Mason, Jean Wilder, Barbara Streisand, and Mel Brooks. Nor is the list of prominent Jewish comedians and creators limited to the United States, as Denmark’s Victor Borge, Bulgaria’s Angel Agenstein, England’s George Mikes, France’s Adam Biro and Marcel Marceau, Germany and Austria’s Karl Farkas, Fritz Grünbaum, Hermann Leopold, Friedrich Hollaender, Kurt Tucholsky, and Ernst Lubitsch were all nationally and internationally renowned. Jackie Mason became extremely popular in Britain. The Marx brothers were globally renowned, and Jerry Lewis was adored in France. The list of leading Jewish humorists includes contemporary artists, such as Gad Elmaleh, who is one of the leading comedians in France (in January 2007, he was voted as the funniest man in France). There is also Sacha Baron Cohen, the British comedian who broke into international consciousness with his television series Ali G (and then into international cinema with the absurd comic movies Borat and Bruno). This list also includes Bill Maher, Jerry Seinfeld, Larry David, Sarah Silverman, Amy Schumer, Adam Sandler, Wendy Liebman, Roseanne Barr, and Jon Stewart.

Prominent Jewish writers enriched humorous literature worldwide, and were internationally acclaimed; these writers include Heinrich Heine, Sholem Aleichem, Franz Kafka, Isaac Bashevis Singer, Bernard Malamud, Saul Bellow, Philip Roth (Roth’s Portnoy’s Complaint was the first book to be translated into Czech after the fall of Communism), Etgar Keret, and Jonathan Safran Foyer. Jewish and Gentile scholars alike testify to the exceptional humorous nature of the Jews. The role of Jewish humor in world culture is best indicated by an article published in the British Daily Telegraph (2011): “Jewish humor rolls cheerfully off the tongue, like French cuisine and Turkish baths. Jewish humor is one of the wonders of the world.  No other community can compete with the range and subtlety of Jewish jokes.” Over thousands of years, the Jewish people have been called “The People of the Book.” It may be time to also give them the title “The People of Humor.”

I wish you the greatest possible enjoyment in reading this book about Jewish humor, and dare to hope that this book will inspire you to add a pinch of humor and laughter to your own lives.

“Arie Sover’s Jewish Humor: An Outcome of Historical Experience, Survival and Wisdom, is a fantastic book. It is really a triumph and an important study of Jewish humor. A combination of superb scholarship and, unlike many books on humor, it is full of great jokes and humorous texts. The material and all the topics are fascinating and extremely insightful. [It is an] important contribution not only to the study of Jewish humor, but all humor. It deals with Jewish humor from the Bible to contemporary humor. In addition to being full of remarkable insights into the nature of humor and its social and cultural functions, it is a study of Judaism, its history and culture through the prism of Jewish humor. It is an indispensable source for everyone interested in Jewish humor.”
Arthur Asa Berger
Professor Emeritus of Broadcast and Electronic Communication Arts, San Francisco State University

“Arie Sover’s Jewish Humor is a virtual encyclopedia, a survey with extensive historical descriptions of the situation of the Jews in various periods and locations, as well as numerous examples of the humor and comedy to be found there, ranging from the humor of the Bible and Talmud, to the humorous poetry of medieval Spain, from wedding jesters and Purim plays in the towns of eastern Europe, to American stand-up comedy and Israeli literary and television satire. Anyone who hopes to traverse this vast terrain will need this book as a guide.”
Elliott Oring
Professor Emeritus of Anthropology California State University, Los Angeles

“In this remarkable book, Arie Sover historicizes Jewish humor: he includes testimony and analysis of various forms of humor created in different periods of Jewish history, beginning with the Bible and ending with Israeli humor, via significant epochs, places and events, such as the Middle Ages, the Renaissance Spanish expulsion, the Enlightenment, the Holocaust, and twentieth-century America. The span of this book is enriched by including all Jewry and addressing many genres of Jewish humor in various media. Moreover, Sover’s book encompasses literature, theatre, jokes, cinema, television, and radio. The tour de force this unique saga accomplishes can be described as follows: by telling us the story of Jewish history through humor, Sover’s book is an event not only in humor studies, but in intellectual history.”
Lydia Amir
Visiting Professor, Department of Philosophy, Tufts University, USA

Jewish Humor: An Outcome of Historical Experience, Survival and Wisdom is available now in Hardback at a 25% discount. Enter PROMO25 to redeem.